‘How I Met Your Father’ Series Premiere Review

It was March 31, 2014. The 24-year-old version of me was watching the series finale of ‘How I Met Your Mother,’ a show I had been watching faithfully since it premiered nine years earlier. As the episode progressed, I became steadily more irate as they dismantled the Barney/Robin relationship they’d spent years building. Then they killed off the titular mother and had Robin end up with Ted, despite the fact it made no sense. My then-fiance had to remove projectiles from arm’s reach. Finally, he just made me stand in the middle of the room because I was so angry he thought I would break something. When news of ‘How I Met Your Father’ broke, I vowed I would never follow these creators down this path ever again. Yet here we are. Keep reading for my ‘How I Met Your Father’ series premiere review.

I wasn’t going to do this to myself. Truly, when I saw that this show was in development, I easily dismissed it. Then they cast Hilary Duff as main character Sophie, and my resistance wavered. Since we’re never going to get the ‘Lizzie McGuire’ sequel, I thought maybe this could suffice. But no, I was still holding out. Then the announcement came that Chris Lowell would co-star as Jesse. I loved him on ‘Veronica Mars,’ but still, I was going to hold out. Then the trailer came out, and they got me. It was such a good preview that I instantly asked to review every episode. Major kudos to whoever put together that trailer because it was truly the best parts of the episode.

The premise is nearly identical to ‘HIMYM,’ but gender-flipped. Sophie (Duff) is telling her son the story of how she met his father. The premiere opens with Sophie in 2050, played by the always delightful Kim Cattrall. Where the original series showed the children and the narrator was off screen, this show keeps the child offscreen and shows us the narrator. 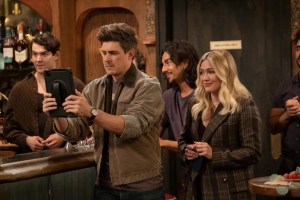 In 2022, Sophie is a photographer, searching for her soulmate. She lives with her best friend Valentina (‘grown-ish’s Francia Raisa), a fashion designer. Valentina just returned from London Fashion Week with a new boyfriend named Charlie (Tom Ainsley), some sort of royal who left his family because he fell for Valentina. In the pilot, Sophie meets Jesse (Lowell), her Uber driver taking her to meet Tinder date Ian (Daniel Augustin). Sophie is certain Ian is going to be her true love. Jesse has just been publicly dumped by his girlfriend (a delightful Leighton Meester cameo) when he was attempting to propose. Also there is Jesse’s best friend Sid (‘Life of Pi’s Suraj Sharma) who is proposing to his long-distance girlfriend that night and Jesse’s sister (Tien Tran) who has just divorced her wife.

Since it’s a pilot, I am willing to forgive the massive amounts of exposition they need to put in. These are the first times we’re meeting the characters, so of course we need the full backstory about how all these people are connected to each other. It’s clunky, and no one has really grown into these characters yet.

“How Do You Do, Fellow Youths?”

The major problem is the writing feels like it would fit in exactly with ‘HIMYM,’ which started 17 years ago. Part of it is that the original creators are on the writing staff for this show. The vibe feels like it is straight out of the mid-2000s. It was particularly egregious in the second episode, in which the group goes to a club called “FOMO.” Also in that episode, they have characters refer to paint colors on a wall as “crisp AF” and try to use the word “simping.” It gave off such an air of a dad googling slang to figure out how to talk to his kids. All I could picture was Steve Buscemi walking up to a group of kids going “How do you do, fellow youths?”

None of this dialogue feels authentic to anyone. It feels like it was workshopped by a bunch of older white guys to get to a specific punchline. Do I believe that Sophie’s comfort song really is ‘Drops of Jupiter?’ No. I believe that a writer decided that was the funniest song they could think of and get the rights to. None of these characters feel like people.

Rather than saying the titular father could be anyone in the world, they narrow it down to four possibilities: Jesse, Ian, Charlie, and Sid. It seems like they’re going for a Sophie/Jesse pairing first. Duff and Lowell are very charming, so I approve of that. Ian moved to Australia in the premiere, but I did see some sparks between Augustin and Duff. He could very easily be ‘Father’s version of Victoria (played by Ashley Williams in ‘HIMYM’).  If it’s Sid or Charlie, that sets up love triangles, which are among my least favorite tropes ever. I honestly already hate the idea of those possible outcomes. 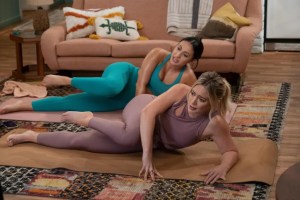 I want to like this show. There are small glimmers of hope. Sophie is an extremely charming protagonist when played by both Duff and Cattrall. The chemistry is there between Sophie and Valentina as friends, as well as between Jesse and Sid. The writing for the show just needs to be dialed down about five levels. Right now, it just feels like after every joke, someone is checking to see if we laughed.

I am fully on board for the ten-episode first season. From here on out, each episode will get its own recap. Find us on Twitter to tell us what you thought of ‘How I Met Your Father.’ In the meantime, be sure to check out our site for more content!