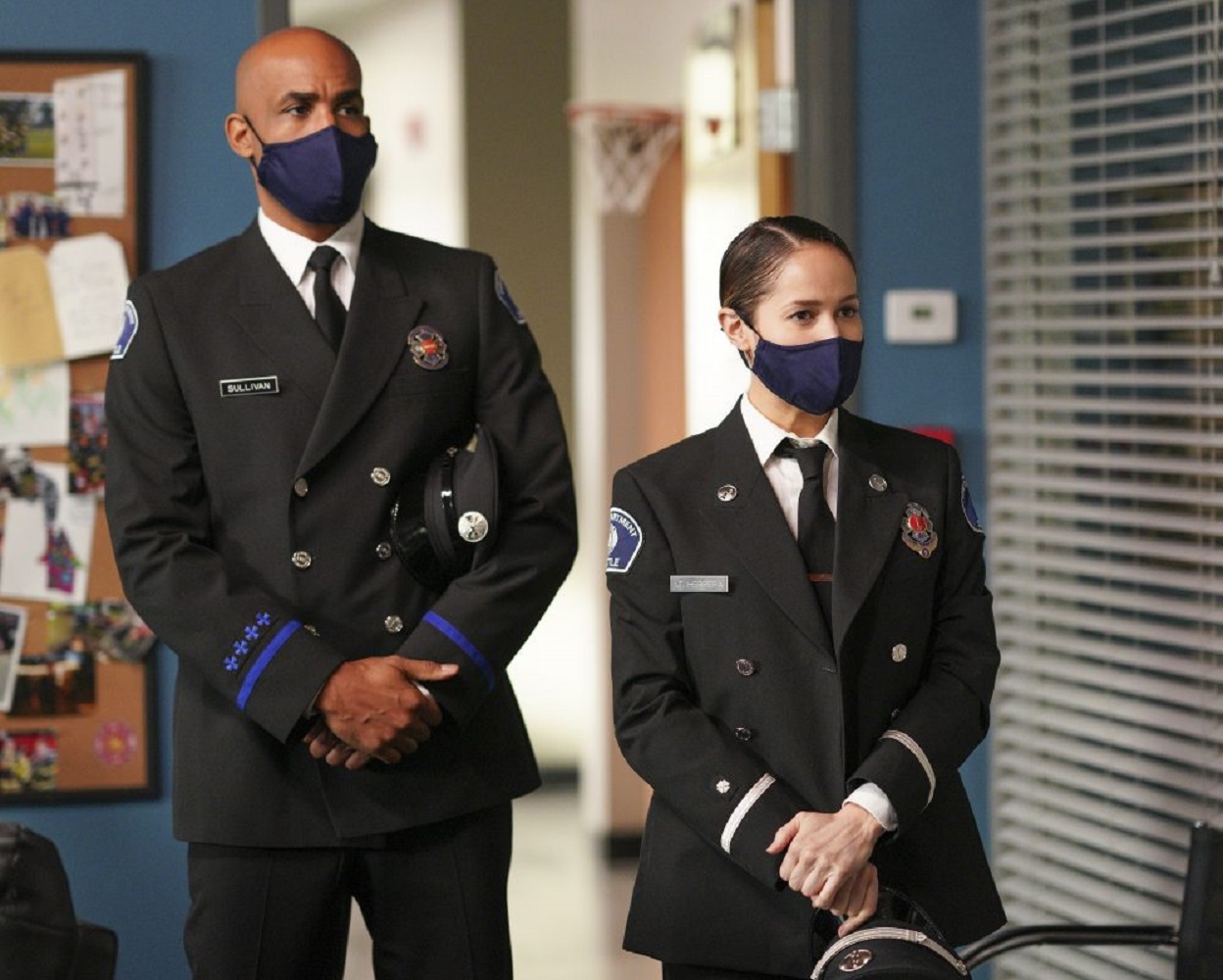 After last week’s emotional rollercoaster of an episode, this week’s Station 19 was significantly more lighthearted. Let’s get straight into the events of “Save Yourself.” Keep reading for my Station 19 4×10 review!

The events of the episode take place in two settings. First, we have the station, which is hosting a city-wide drive-through Covid testing. Then we have our Disaster of the Week. Let’s dispense with the details of our weekly disaster before returning to the individual storylines.

Our major disaster is the storyline that carries over into ‘Grey’s Anatomy,’ so we just get an introduction. Shayne and Karissa are two newlyweds who leave the Covid testing event and promptly get their SmartCar lodged in the back of a moving van. This is not a fear I realized I had until it was presented as a possibility. We will learn many things from Shayne and Karissa. Most importantly, do not marry someone until you see how they react in a disaster.

Shayne has more significant injuries with his leg pinned underneath the dashboard of the car. The team tries to get him out first. In her panic, Karissa begins screaming that they should save her first because she has a family and no one other than her will miss Shayne. By the time Shayne is out of the car, he is 100 percent over his new wife. And really, I get it. Their storyline wraps up on ‘Grey’s Anatomy.’ Spoiler alert: They aren’t newlyweds for long.

“They Need Me More”

So, let’s delve into our regular characters and see how they’re doing. Carina snaps at everyone as she sets up the Covid testing. Finally, Maya pulls her aside and Carina tells her that her visa is expiring. The immigration offices closed due to the pandemic, and she has to go back to Italy.

We get some great Maya/Andy friendship moments as Maya tries to process this information. Maya worries because they’ve been so good together through the pandemic and Andrew’s death. Andy is the perfect supportive friend and just keeps reminding her they’ll stay good. She encourages Maya to go to Italy with Carina. I have some questions about the Covid travel logistics here, but I know I shouldn’t question it too heavily. 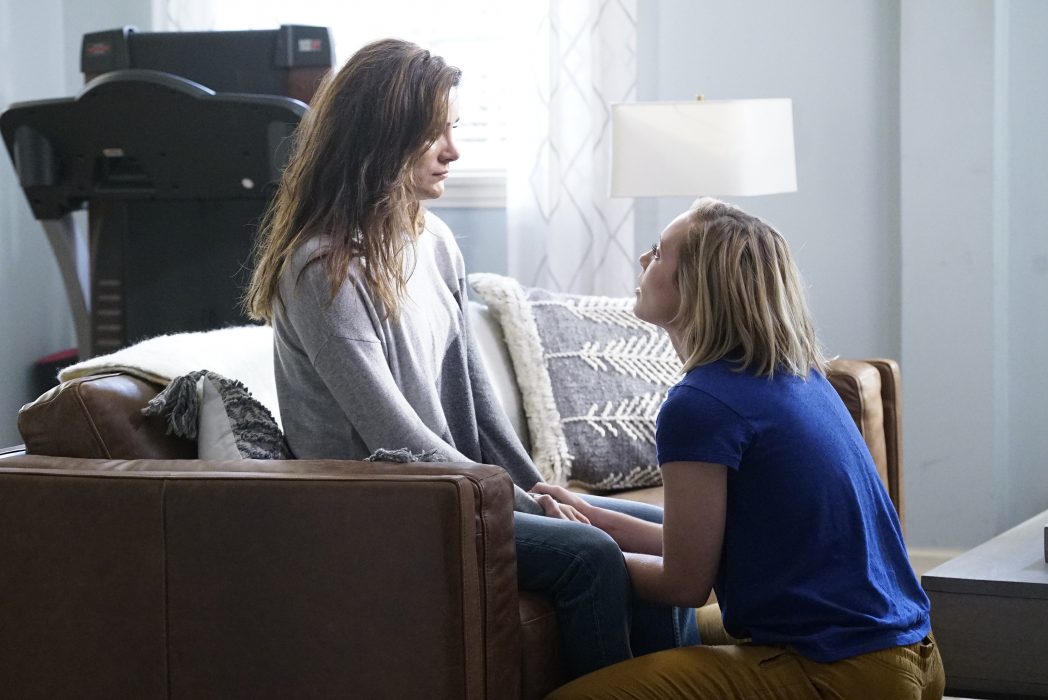 Carina is torn because she knows how badly Italy needs doctors. Several of her family members died from Covid. She eventually tells Maya she needs to go back to help out her home country. Plus, she wants to spread Andrew’s ashes on the beach. Maya says she wants to go with her. And honestly, I’m all for an Italian romantic getaway with these two.

Battalion Chief Gregory returns to the station and he has strong opinions about Miller’s lawsuit. He spends time arguing with Miller and Vic about how their community needs to know who to trust now more than ever. Gregory agrees that change needs to happen, but how Miller forces change matters.

Miller and Vic spend a bit of time talking about his lawsuit. He asks if he should just ignore all the ways he was wronged because they made a minimal effort as he did with his parents. I love the way they handle this storyline. The conversations about how to affect change when you’re working within a system that needs to be changed are handled in such a nuanced way that you don’t normally get on network television.

Battalion Chief Gregory shows up at the accident scene to oversee their call. Gregory talks to Miller about all the racism he experienced as a young firefighter. The way his peers wouldn’t sleep in beds after him. The way they broke mugs after he used them. It’s all completely sickening what he had to experience. He tells Miller he walked through fire to be able to get more Black firefighters in the department. Miller says he wants to cut the gas line entirely and eliminate the fire. This conversation between them is probably one of my favorite moments of the season.

At the end of the call, Vic loses it and asks if Gregory is there to support them or to make the police feel safe. After Gregory leaves, Vic apologizes for not holding back, but Miller and Maya both tell her they’re glad she didn’t. The fact that Maya is so on board with Miller’s lawsuit is such character growth for her. She’s always been so career-driven, and as captain, she could absolutely catch heat for not “controlling” Miller better. But she sees he’s doing the right thing and I love how supportive she is.

“You Are The Only Good Thing In My Life”

Andy’s family shows up for the drive-through Covid testing, mainly to try to meet Sullivan. He ends up doing their testing and they all get along really well. Then it comes out that Andy never told them about Sullivan’s demotion, which just lends credence to his theory that she’s ashamed of him. She tries to reassure him that’s not the case, but he doesn’t believe her.

Sullivan is awesome throughout the entire call. He is decisive, level-headed, and he manages to calm Karissa. He is, to pardon the pun, on fire. Gregory pulls Sullivan aside and basically implies that if Sullivan helps quash Miller’s lawsuit, he may find himself promoted to lieutenant. It’s shady and slimy. I hate the fact that Sullivan even considers it, even though I understand it.

Once they’re back at the station, Sullivan tells Andy he knows he overstepped on the call, but she tells him he didn’t. He tells Andy about Gregory’s offer. She is surprised he’s even considering it after how the police treated him. He tells Andy he can change the system from within. This is such a great contrast to the Miller/Vic conversation about the lawsuit. And again, that question of how to change a broken system from within is one that desperately needs to be examined in so many ways. Sullivan tries to say a promotion would help Andy be less ashamed of him. He tells her that his career is the thing that needs saving now because Andy and their marriage are the only good thing in his life. She finally relents that she doesn’t support his plan, but she loves him.

Their relationship conflicts me so much. On the one hand, Andy and Sullivan have insane amounts of chemistry. On the other hand, they rushed into a marriage when both of them were going through traumatic situations, which never leads to good things.

“How You Love Is Valid”

In the most important development this week, Travis and Vic’s friendship is back to normal. All is right with the world again, which Emmett points out. I have not historically been an Emmett fan, but the fact he recognizes TraVic is everything wins me over a little bit. Vic encourages Travis to ask out Emmett, but Travis is so adorably nervous.

Travis can’t focus on his crush, though, because his parents show up for the Covid testing. His father Paul’s “golfing friend” exposed him to Covid. Travis immediately realizes the two were “golfing.” We get lots of innuendos about balls and gloves as Travis lectures his dad about safety. Travis asks his dad why he doesn’t just come out. Paul says Travis’s mom Nari is his best friend and he loves her.

In one of my favorite scenes, Travis goes to ask Carina for a test. She is frustrated because he breaks their testing protocol. Travis just flat out says his dad “is in the closet and he may have been exposed by one of his secret male lovers.” Carina asks no further questions and hands over the test as long as he promises to tell her everything later.

As Travis says goodbye to Paul, he brings up the night he came out and basically gives his dad the speech he wished he had gotten. He tells Paul he’s loved and important. And how he loves is valid. I have many favorite Travis moments, but this one is near the top of the list. 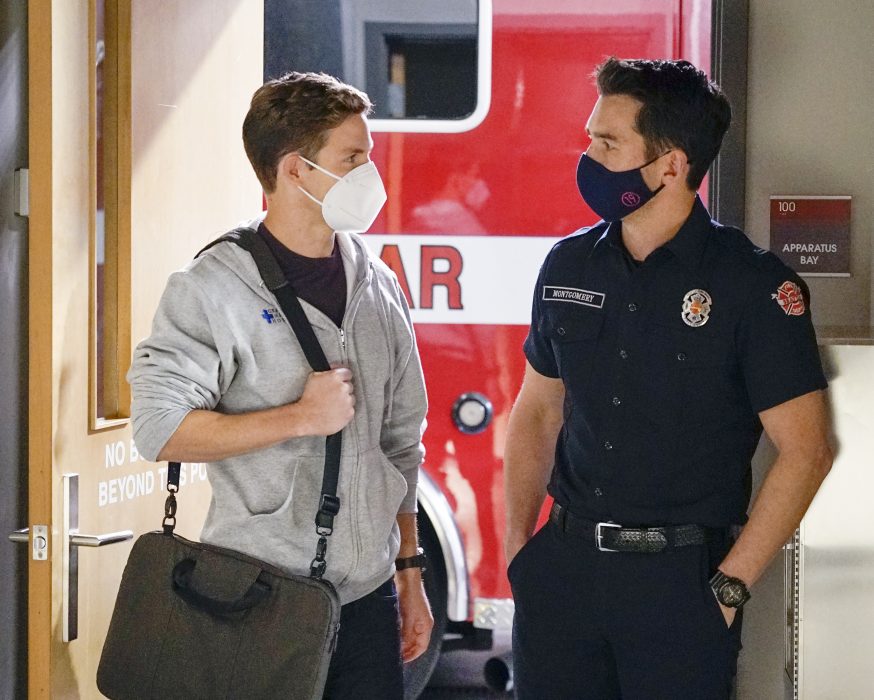 At the end of the day, Travis goes to find Emmett to try to ask him out. Travis’s courage disappears once Emmett tells him how glad he is to have a friend through everything. If this is going to set up a nice friends-to-lovers slow burn, I will always be on board with that.

Jack gets the call that Marsha’s son is enacting his power of attorney and taking her off the ventilator. Inara and Marcus show up at the station, and they spend their day saying their goodbyes to Marsha.

They spend the rest of the episode on a FaceTime call at Marsha’s bedside. We get a nice cameo from Dr. Schmitt from ‘Grey’s,’ who tells them that Marsha said Jack, Inara, and Marcus changed her life. Marsha’s son quickly hangs up, deciding he’s not waiting with his mom. This seriously upsets Marcus. 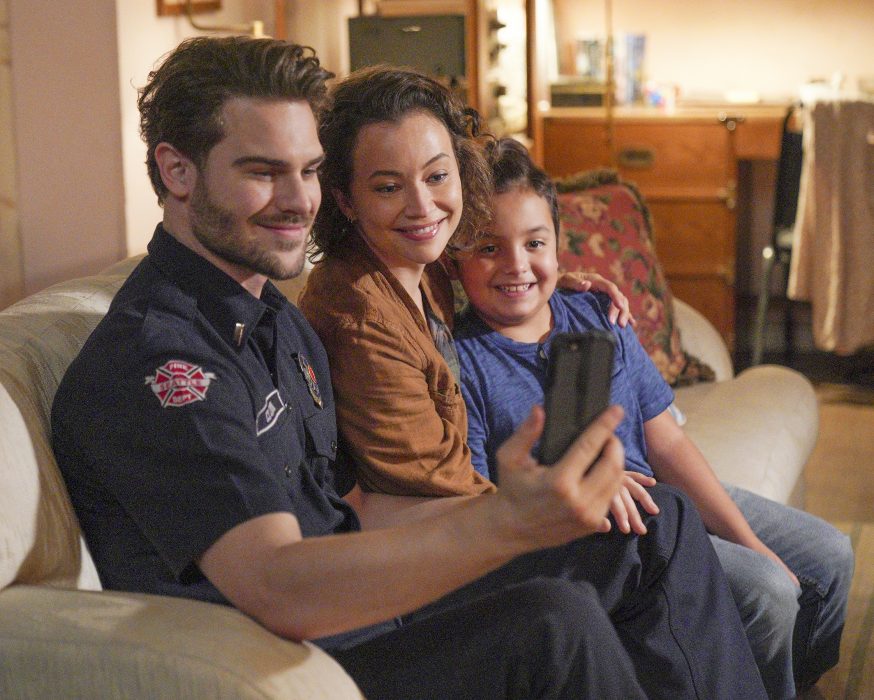 Jack comes across Carina as she is having a small meltdown. She rants about how Jack was the one person she vowed would never see her cry. Stefania Spampinato plays this as a really funny beat. Once she finds out about Marsha, she tells Jack he has to show Marcus how to deal with his emotions healthily.

Taking her advice to heart, Jack takes Marcus into the gym and encourages him to take his anger out on the punching bag. He lets Marcus punch the bag for a while. Then he hugs him and tells him it’s okay to cry, too. And I am crying from my couch at this tender display of healthy masculinity.

The episode ends with everyone together in the lounge area. Carina tolerates Jack now, which surprises Maya. Vic and Carina find out the update on Travis’s father. In a major milestone, Carina uses her first English idiom correctly. Maya and Carina sit with Jack, Inara, and Marcus as they wait on Marsha. Jack tells a story about how Marsha found out she is afraid of birds. And look, this story is meant to be funny, but I am also terrified of birds, so that whole scenario was basically nightmare fuel for me. As everyone laughs, they hear Marsha awake and laughing. I cannot handle the emotions over whether Marsha is going to die. Please let her be okay now.

That’s where we leave everyone for the week. How excited were you to see Marsha wake up? Do you love Father Figure Jack as much as me? Be sure to find us on Twitter @capeandcastle to share your Station 19 4×10 thoughts! Check out our site for more content.