Last week, Rowan finally came to New Orleans and Deirdre awoke from her catatonic state. Unfortunately, their first meeting came to a bloody halt when Deirdre met a grisly end from a mysterious throat-slashing. This week, Lasher lured Rowan out of a Talamascan safe house while Ciprien investigated Deirdre’s death.

Warning: It’s about to get spoiler-y.

The episode began with yet another flashback of Mayfair history. Suzanne (Hannah Alline), the eldest of the Mayfair siblings we caught a glimpse of last week became the head of the family after her mother was attacked by a boar. This dreadful loss mirrored that of Rowan (Alexandra Daddario) and Deirdre (Annabeth Gish) from last week. It seems that mothers of Mayfair daughters follow a trend of gruesome deaths.

In the present, Rowan cradled Deirdre in her arms in the elevator, drenched in blood. The way the show has managed to capture feelings of being overwhelmed and anxious is outstanding, especially in an instance of tragedy like this is masterful and so well-received. Between people screaming, but no sound reaching Rowan’s ears and Carlotta (Beth Grant) getting in her face to tell her how Deirdre was her mother, it was intense. Rowan ran from the hotel and I don’t blame her.

Outside, Ciprien (Tongayi Chirisa) was already waiting for her as he had promised. Even though Rowan unintentionally gave him a near-death touch, I’m glad to see he’s still willing to help her. By the looks of it, the Mayfairs don’t get outside help very much, not that they trust people all that easily. 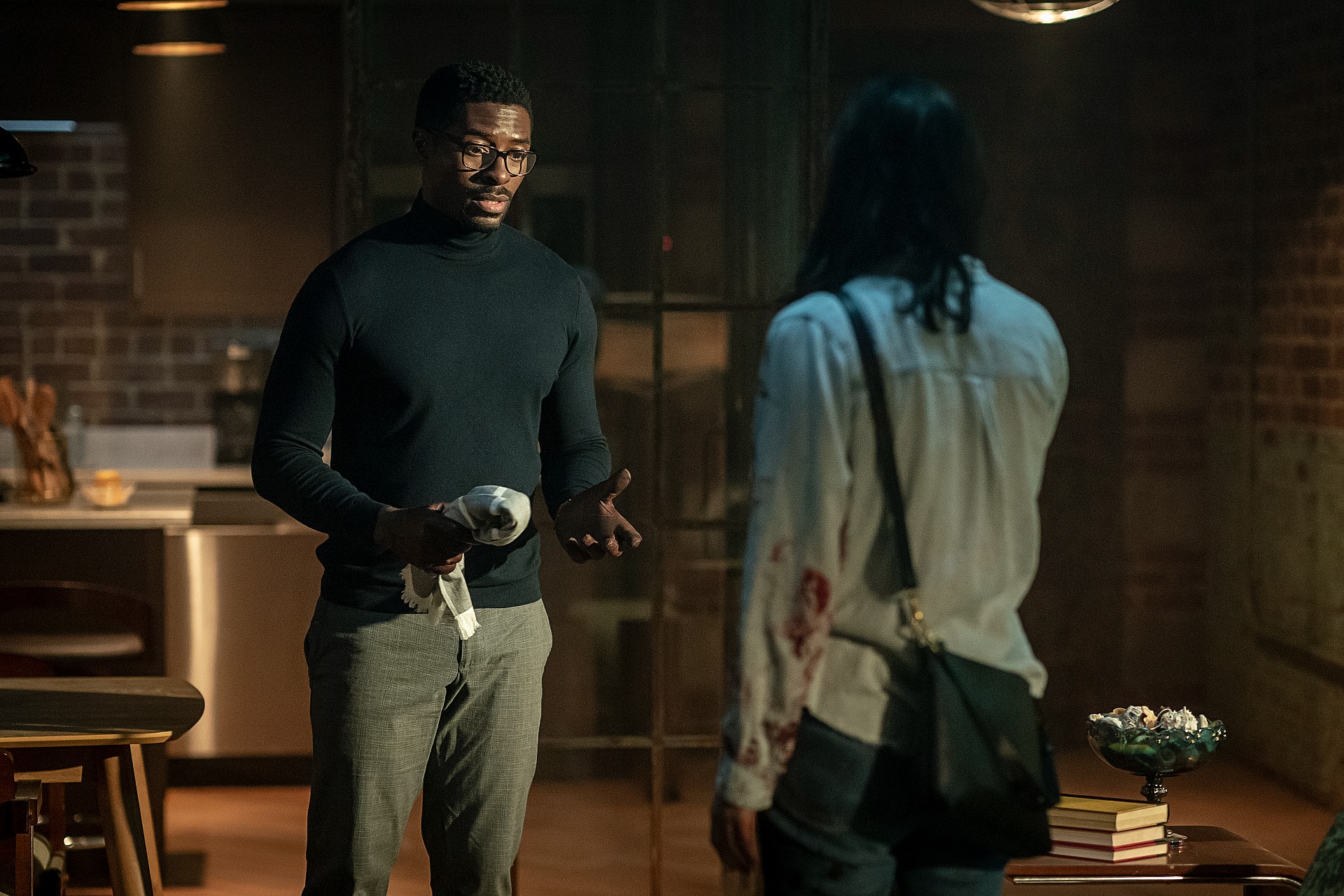 Ciprien brought Rowan to a safe house that he conveniently uses as an apartment from time to time. Rowan didn’t give herself a moment to take in the shock or grief of losing yet another mother. Though she didn’t get to know Deirdre, there was still that connection that pulled them to each other. Then, losing Deirdre right as they met? There’s bound to be grief of reckoning proportions.

Ciprien didn’t press her about how she was feeling but did answer all of the ruthless questions, Her comment about his forty pairs of gloves was one hell of a burn. Rowan and Ciprien’s interactions have been on fire so far. Ciprien’s gentle and kind nature clashed with Rowan’s abrupt and a brash one. So much chemistry.

Though Rowan didn’t fully understand the danger she was in from Lasher, the Talamasca wasn’t taking any chances. They put up protection around the safe house which highlighted once more just how dangerous Lasher is. It’s good to see the Talamasca make themselves useful even though it’s reminiscent of a salt circle that keeps out ghosts.

Rowan’s resistance to trust Ciprien wasn’t unwarranted. He knows all about her from just a touch, but she knows nothing about him. Still, with how open he continued to be with her, it would’ve been nice if she had let down her wall just a little. 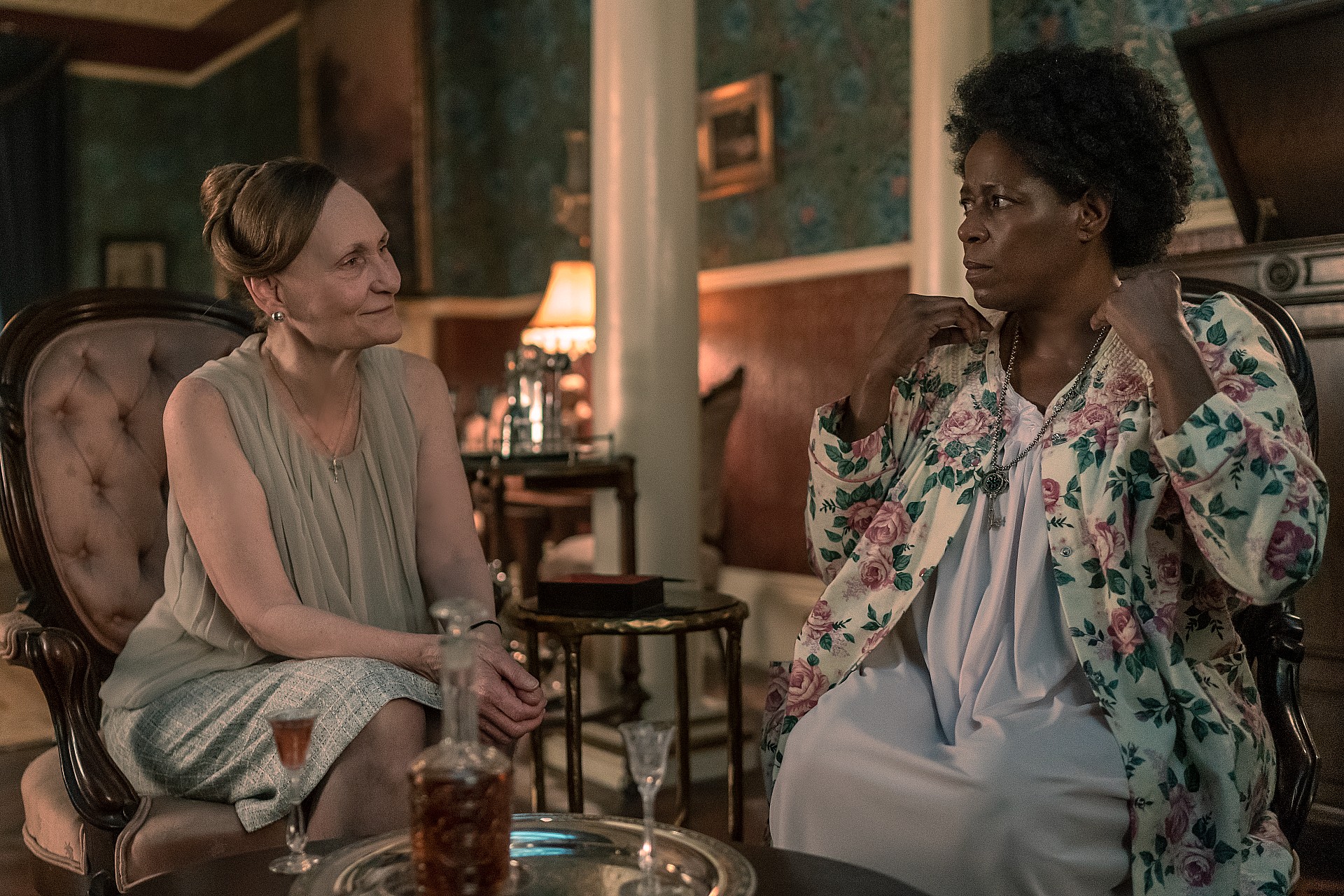 A Wake for Mother

Cortland (Harry Hamlin) was as rattled as Carlotta about Deirdre’s demise, but their mourning didn’t compare to the grief that Lasher (Jack Huston) held. He-pardon the pun-lashed out at Cortland, whipping him good after breaking a window and nearly cutting up Cortalnd’s handsome face.

Cortland recovered quickly and possibly saved himself from more damage by telling Lasher that Rowan was the thirteenth witch. What that means is unclear, but it’s pretty ominous. He then went to investigate Rowan’s hotel room. The fact that Lasher came after Cortland directly and not Carlotta hints that Cortland may have had something to do with Deirdre’s murder. It was in his hotel, too.

Carlotta, though she mourned Deirdre, was ready to lure Rowan to the Mayfair House. Though dastardly, she was sure a wake for Deirdre held at the house would draw Rowan to them. As if using Deirdre’s death as bait wasn’t enough, Carlotta hit two birds with one heirloom. She took the necklace that Deirdre wore all the time and gave it to Delphine, the woman that had been Deirdre’s caretaker since the start. And Lasher, acting like a petulant child, didn’t like his new leash so he decided to bang Delphine’s head against the basement wall. Poor Delphine.

Carlotta is one cruel woman, but after how distraught she was and how terrified she was of Lasher, she may have an actual reason to be. It’s too early to tell who’s good and who isn’t, but the Mayfair’s true colors are starting to show. One thing is certain, nothing is as it seems with this witchy family. 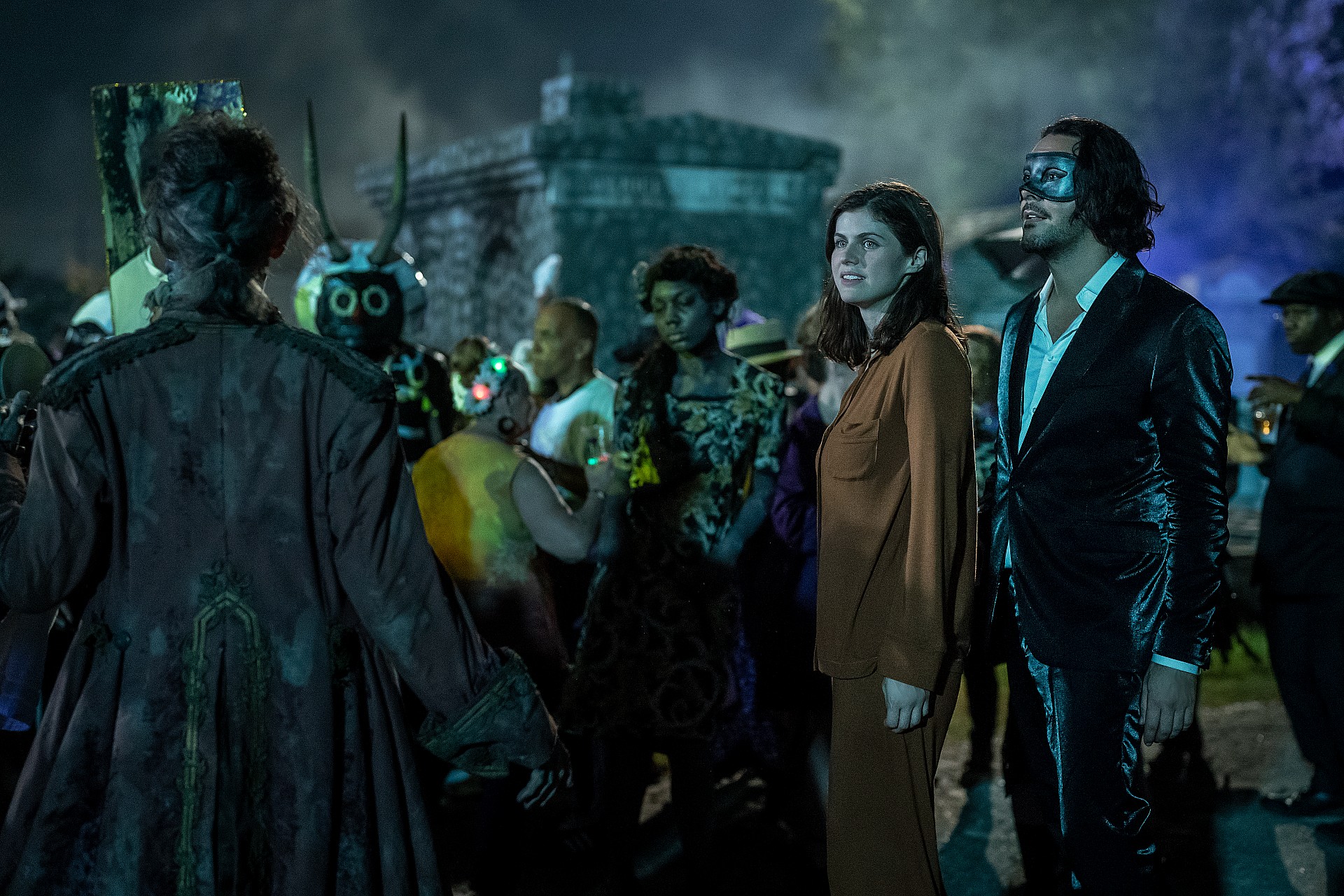 Lasher was back at it with the dreamy visions, but now it was with Rowan. After mysteriously starting a fire in the apartment building, he lured Rowan out of the Talamascan safety zone with a New Orleans jazz funeral. He charmed her without her even noticing.

From appealing to her as a middle-aged woman who’d also lost a loved one to charming her as a masked stranger, he whisked her away. Seeing how effortless it was for him to sway Rowan just like he did Deirdre was frightening, and then seeing him sweep right in like the charmer he is was even more so.

As the two circled around each other in a drunken blush, I was left curious about who was alive in this cemetery and who wasn’t. Who was human and who wasn’t? Lasher making the haunting comment that the dead could be found anywhere, shook me a bit. 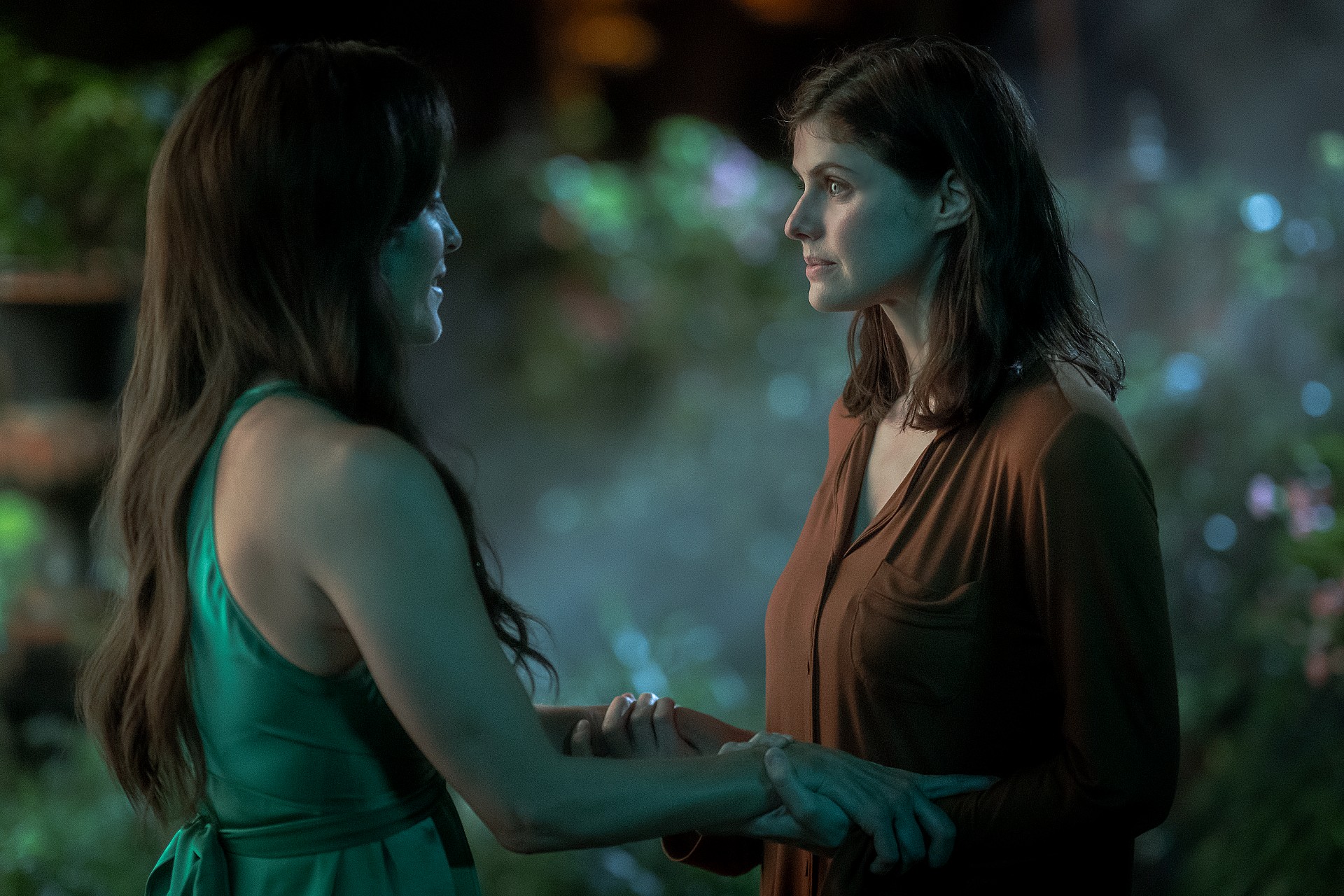 Lasher did eventually lead Rowan to the Mayfair House and Deirdre was there to greet her. I know! I was stunned too! Obviously, Deirdre is a ghost, right? This official first meeting was exciting, except for Deirdre being dead, of course.

Mother and daughter were a mess of joy, but it didn’t last. Deirdre had so much to share with her about how powerful she’d be and who she would become. Deirdre sounded so proud. It was actually beautiful.

Unlike Ellie, Deirdre was encouraging Rowan to open herself up to all that was happening to her. It was everything Rowan needed to hear, which was great, except Deirdre wasn’t Deirdre. Deirdre wasn’t a ghost. Deirdre was actually Lasher, and this was only a vision he was giving her. She had never gone to the cemetery or the Mayfair House. 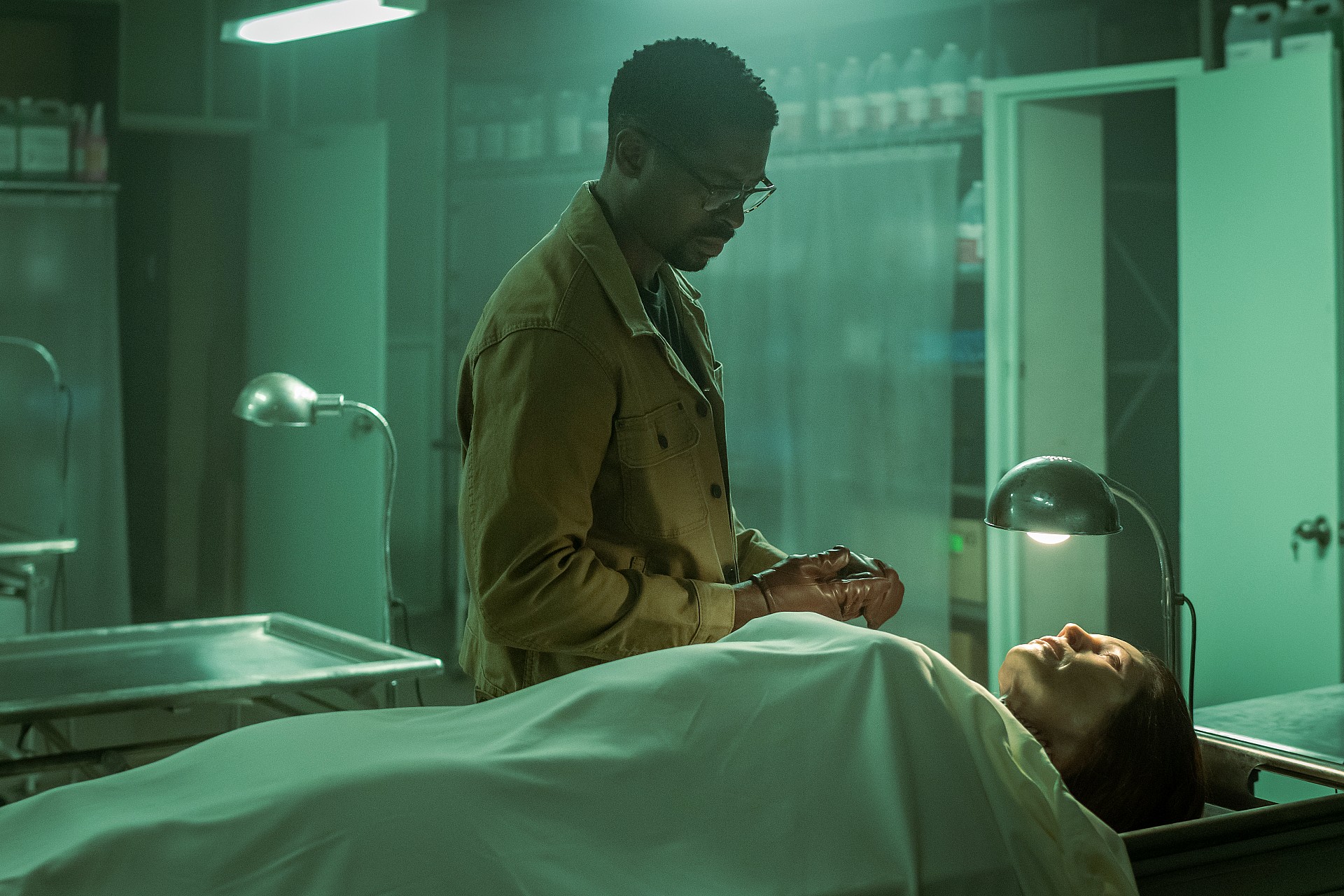 While Ciprien was letting Rowan settle in, he went to investigate Deirdre’s murder. He captured nothing at the hotel, not even with his unique ability to see the past through objects. There were no memories in the elevator, just white noise. Whoever had done wiped all the evidence.

The follow-up at the morgue with Deirdre’s body yielded an interesting result, however. Ciprien getting to see Deirdre’s strongest memory was moving, but that wasn’t what garnered my intrigue. The hunch from last week based on the news story about a woman burned alive grew. The doctor that allowed Ciprien to view Deirdre’s body, offered him a flyer to a rally of “The Brotherhood”. How freaking ominous!

I can’t be the only one that connected the dots, especially after the doctor went on excitedly about how the Mayfairs were actual witches. Ciprien did his best to play it off that there were no such things as witches, but I’m not entirely sure the doctor believed him.

One thing is certain. The Mayfairs might have more on their hands than just a demon haunting their family. Possibly witch hunters? 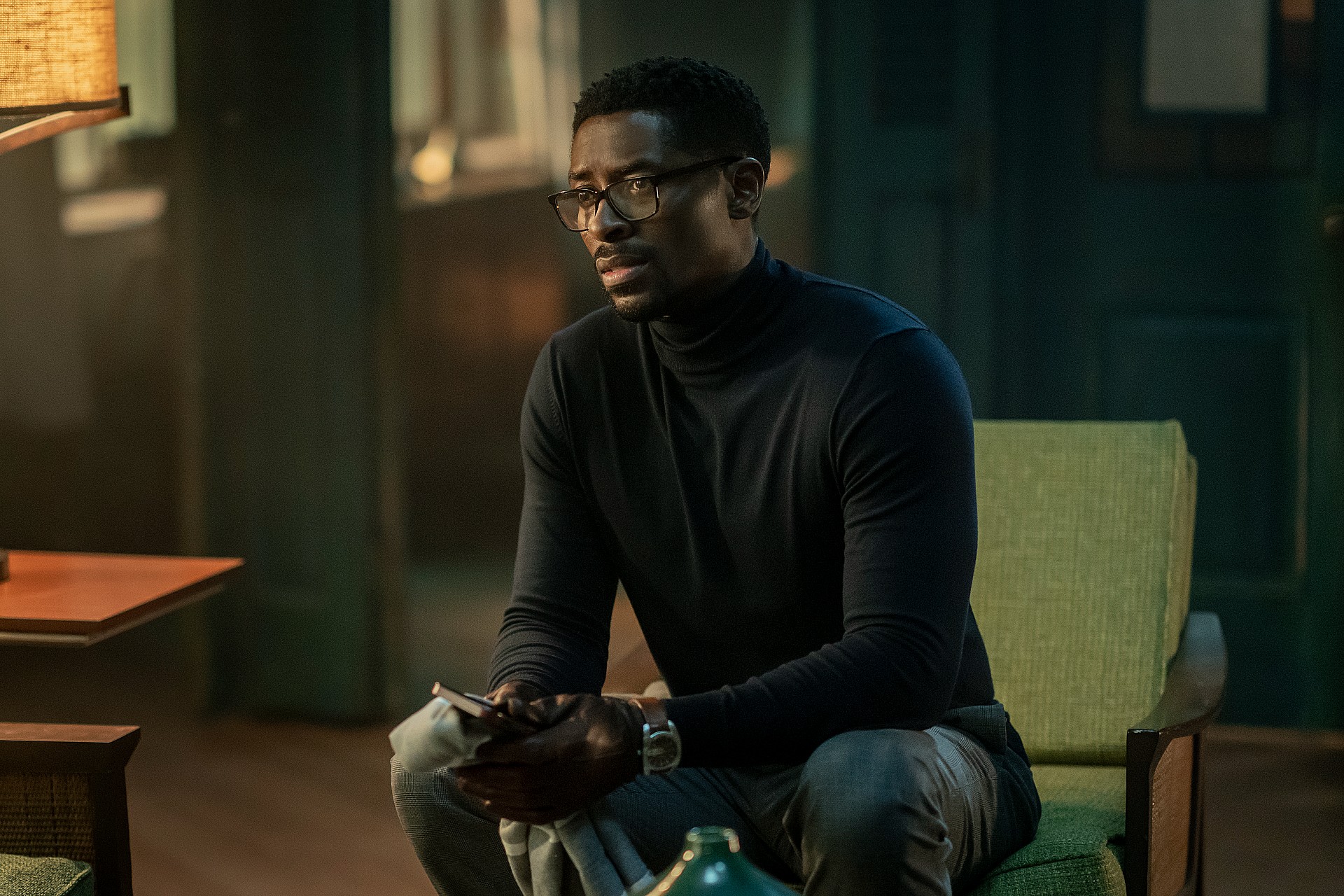 After both of their adventures, both Ciprien and Rowan found more trust in each other. And, I was beyond thrilled! It’s about freaking time!

Rowan was ready to accept help with her abilities and with resisting Lasher’s visions. Ciprien was ready to lean further into his abilities, which was great. I’ve noticed how hesitant he’s been with them.

With all the information the Talamasca has on the family, Ciprien will be able to help Rowan ease into being a Mayfair, hopefully. They both have a bit to work on and leaning into each other could be good for them. It could even be spicy. I hope it’s spicy.