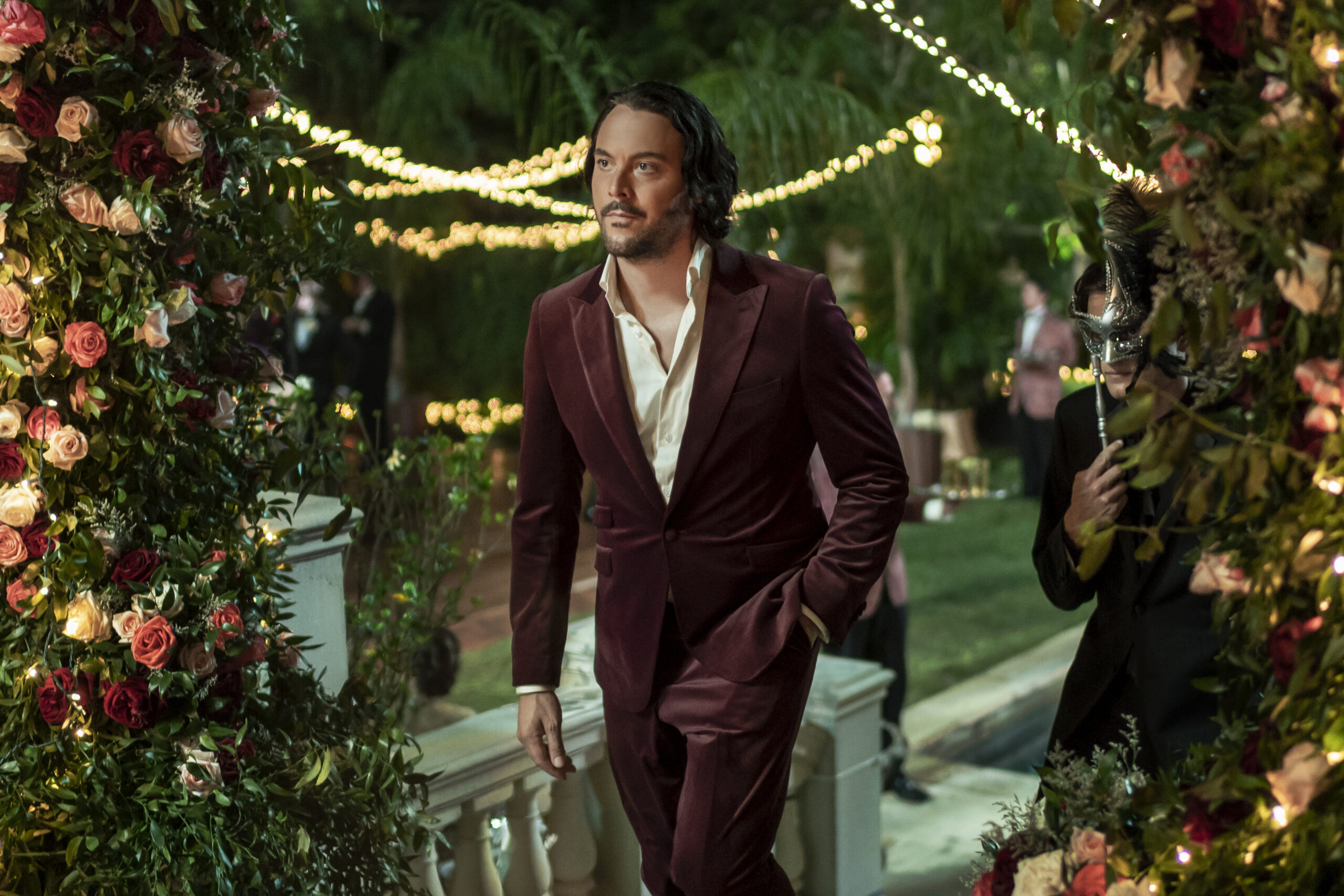 Anne Rice’s immortal world grows. Not only are we graced with Interview of the Vampire, which we hope to see further expanded into The Vampire Chronicles, but Mayfair Witches as well. Not only are we dreaming of a crossover already, but also of what more can we see of Rice’s unyielding supernatural world.

The premiere didn’t bring us in gently, but fast and hard. Rowan was quickly seeking answers when her witchiness spins out of control and into something deadly. Her family roots are uncovered and they may put her in danger. 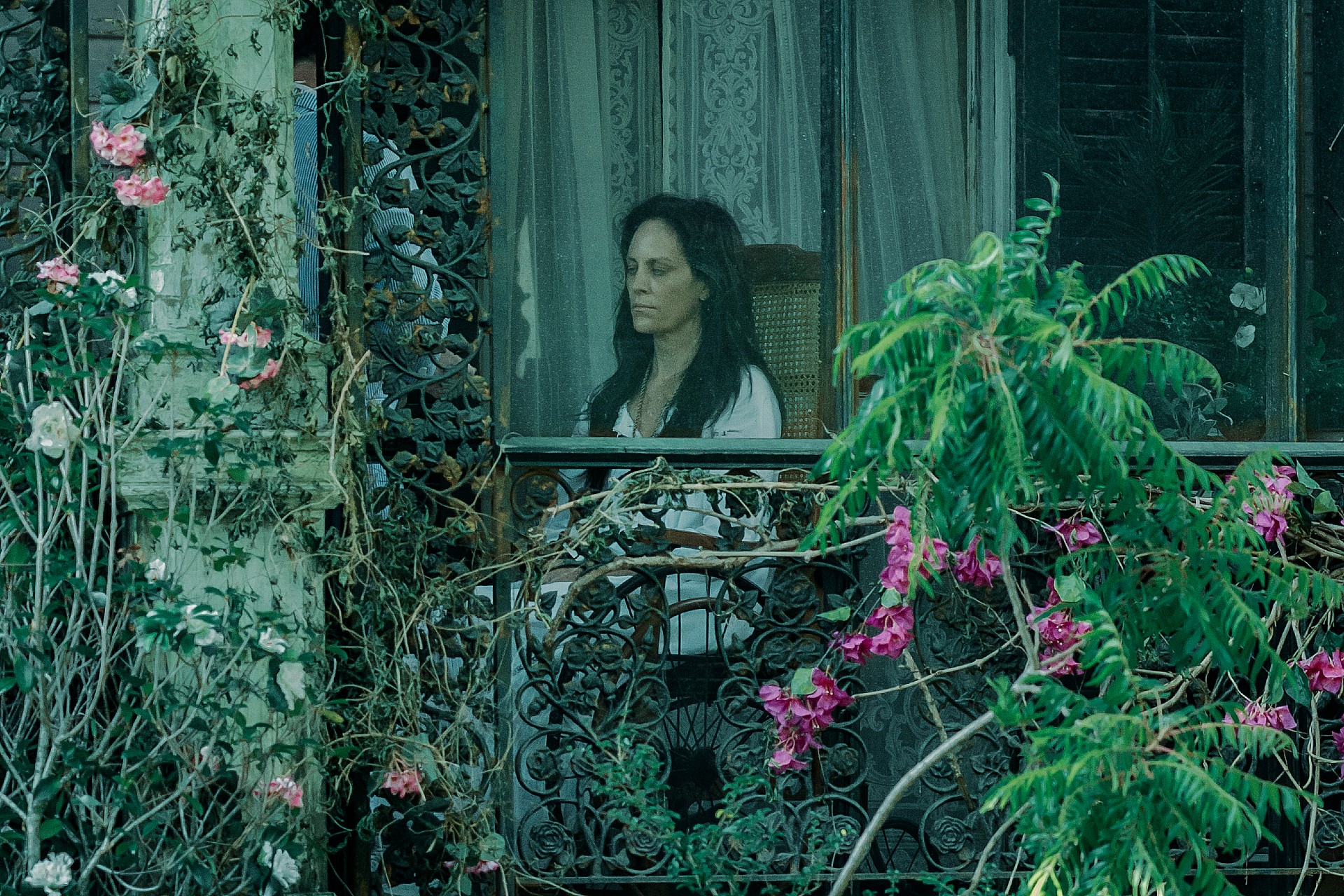 The episode began shakily with Deirdre (Annabeth Gish), a Mayfair, on the front porch in a catatonic state. Yet, somebody or something AKA the infamous demon, Lasher (Jack Huston), was communicating with her. The doctor watching over Dierdre had caught a glimpse and begged her for communication. The perfect start to this bewitching show. Just so witchy.

The fact that the show began in the same fashion as the first book in the series: The Witching Hour is a positive sign. Turning such a renowned author’s work with such impeccable detail like this will make everyone feel shaky. You want it to be as close to the source material as possible and give it the respect and love it deserves. I feel such a deep pride for how well done this was, even from the first minute of the episode. Just splendorous. 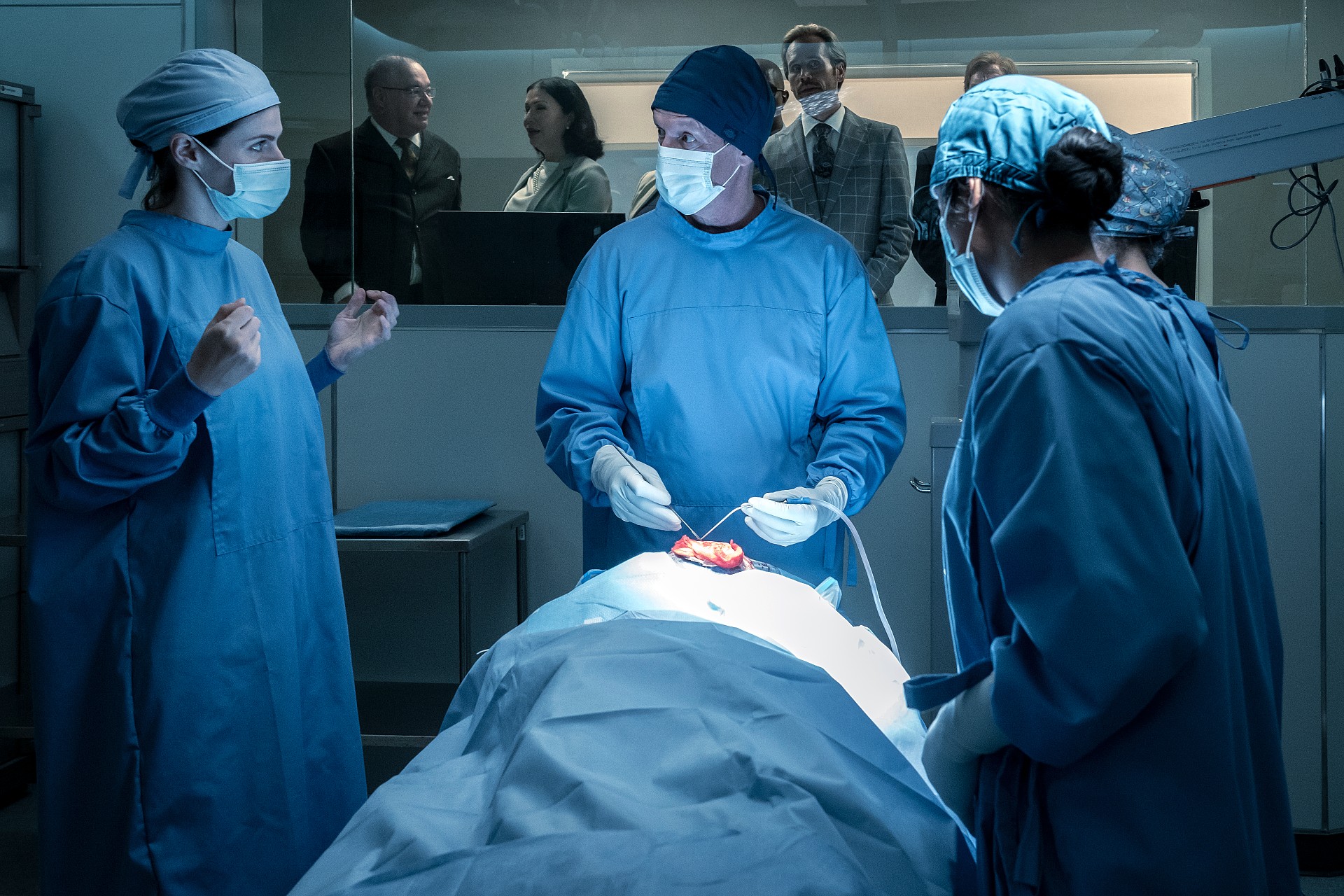 No Need For Anger

The first glimpse of Rowan (Alexandra Daddario), showed her captaining her boat on the open sea. Shortly after, she is prepping for a major surgery, revealing her to be a surgeon. She came off as a great character that everybody liked immediately. She loved her job and cared about her patients. Unfortunately, she also was walked all over by her boss, Dr. Keck (Jim Gleason).

Rowan was quickly ousted from one of her surgeries and not for the first time. I was feeling the same way her fellow nurse was. Quite a rage. It increased when Rowan was denied a position to help her mother by Dr. Keck, who’d also been the one that ousted her. In all honesty, it was his fault, not Rowan’s that he had collapsed from an artery rupture of some sort. He shouldn’t have gotten extra misogynistic then he wouldn’t have triggered her powers. The move was very subtle and untraceable and I don’t feel bad for Dr. Keck.

Though Rowan struggled with what she did, her mother, Ellie (Erica Gimple), was undergoing chemotherapy for her cancer relapse. The overlapping excitement of the relapse and Rowan’s sudden power emergence was amplified even more when Ellie called the Talamasca directly to get in touch with the agent on Rowan’s “case”.

For those who don’t know about the Talamasca, it’s a secret society that observes the supernatural world and takes record of it, but never gets involved. A version of Supernatural’s Men of Letters.

Not only was it discovered that Rowan was tied to the supernatural on a much bigger scale, but she’s also not Ellie’s. That’s right, our Rowan was adopted.

While I do feel sympathy for what Ellie was suffering through, she was shady. 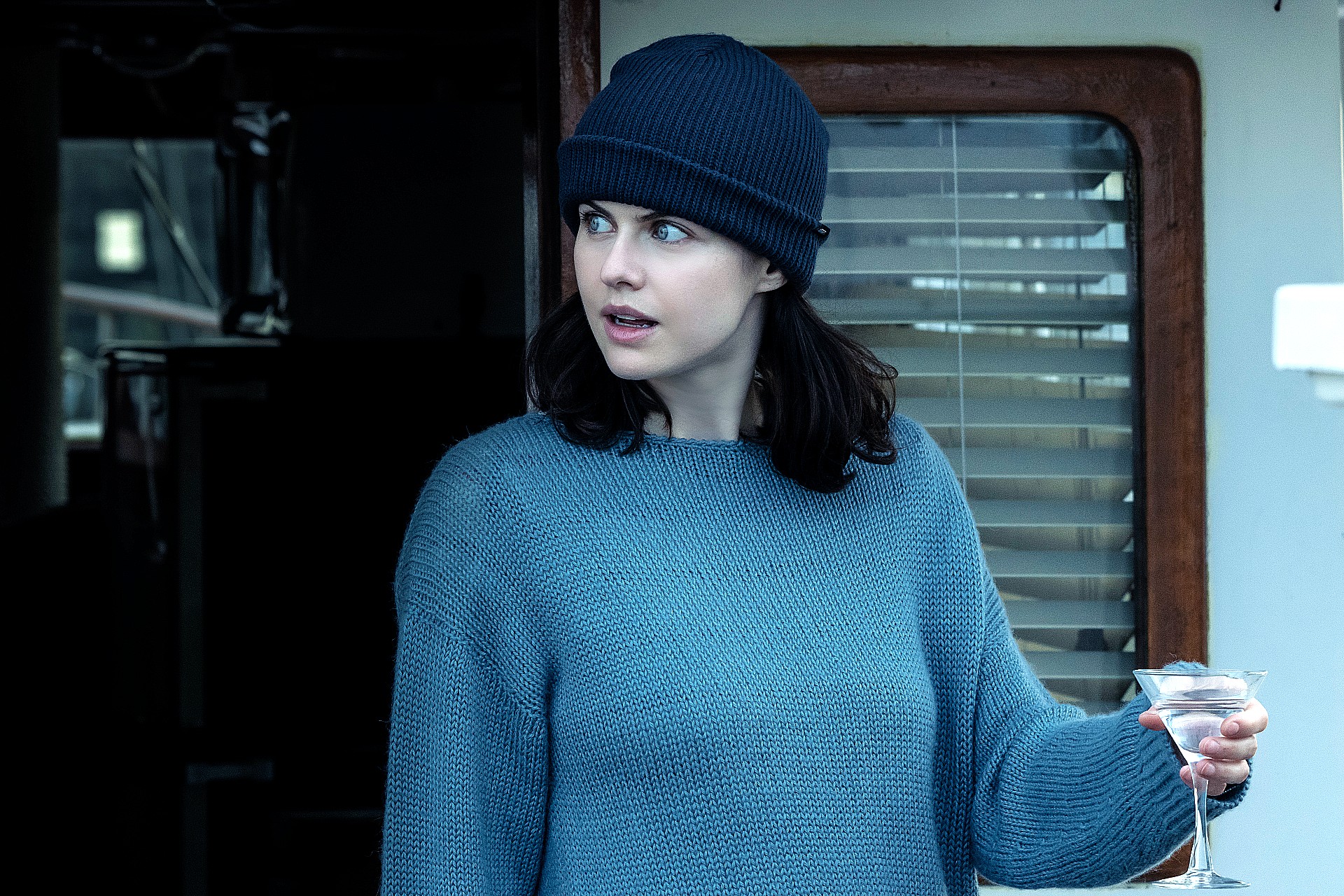 After receiving zero answers, let alone any support about her accident regarding Dr. Keck, Rowan found herself in her favorite local bar with her favorite local bartender, Max (Jordan Cox). While I totally saw sparks flying, Rowan was quick to shoot down any future relationship with him. The woman can admit that she’s not up for anything serious while she’s handling her own identity crisis, and I respect that. Still, I’m holding out hope for them in the future because their chemistry is increrdible. 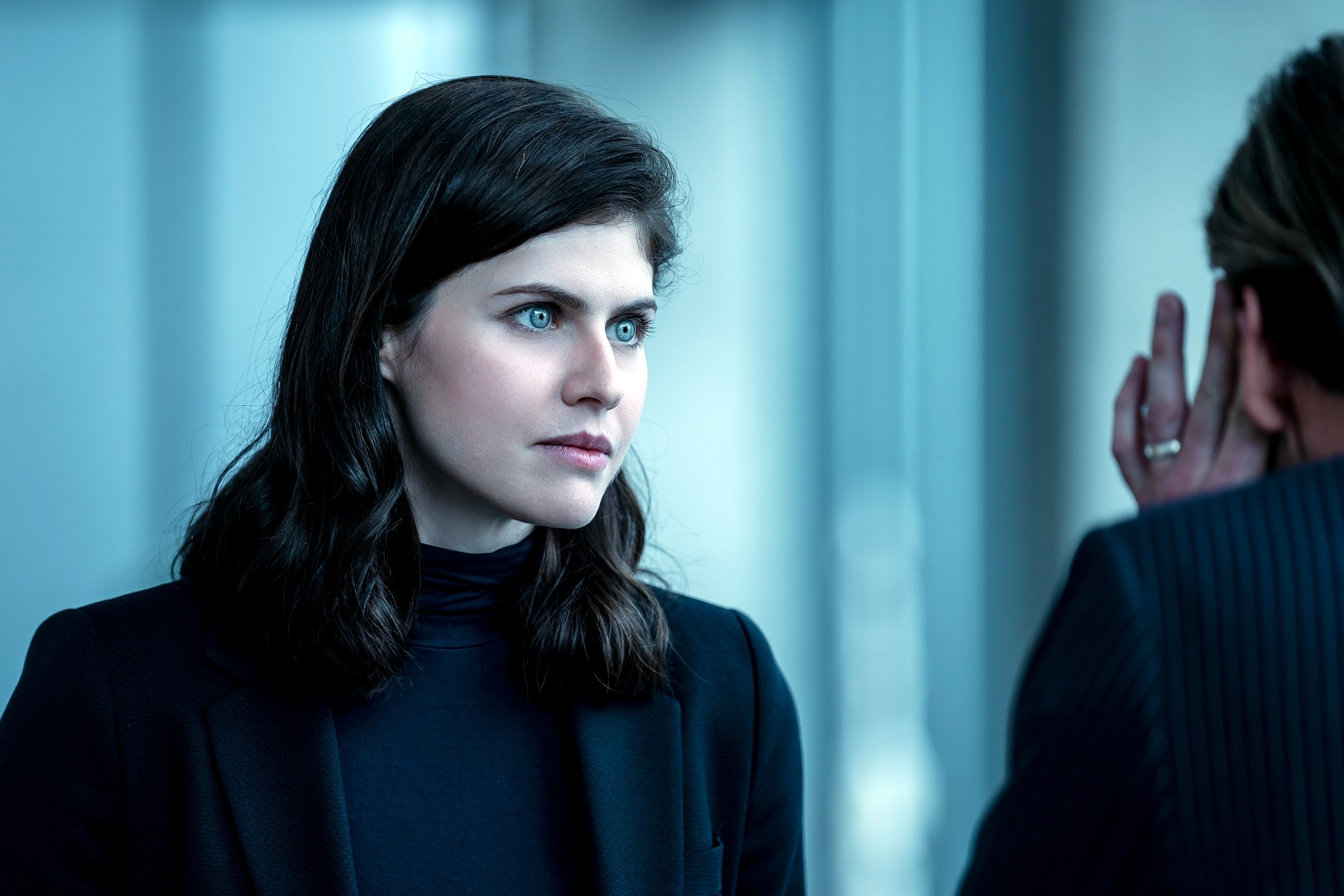 Rowan continued to apply for the research position that would allow Ellie on a special trial that could potentially help her fight her cancer. Daniel Lemle (Tobias Jelinek), the doctor running the trial turned out to be a bigger douche than the last doctor. It was gross. in the end, Rowan killed him as well with a little mind aneurysm.

So, while it would be normal to freak out that Rowan is going around killing people with her mind, I was not. Okay, murder is bad. But then there’s the fact that Daniel was a bigger wanker than Keck. He had it coming.

Ellie refused to listen to Rowan when she tried to tell her about it. The strength in Ellie’s forcefulness wasn’t because she didn’t believe her, but because she was trying to protect her. Rowan, however, was terrified with no idea where this power came from. 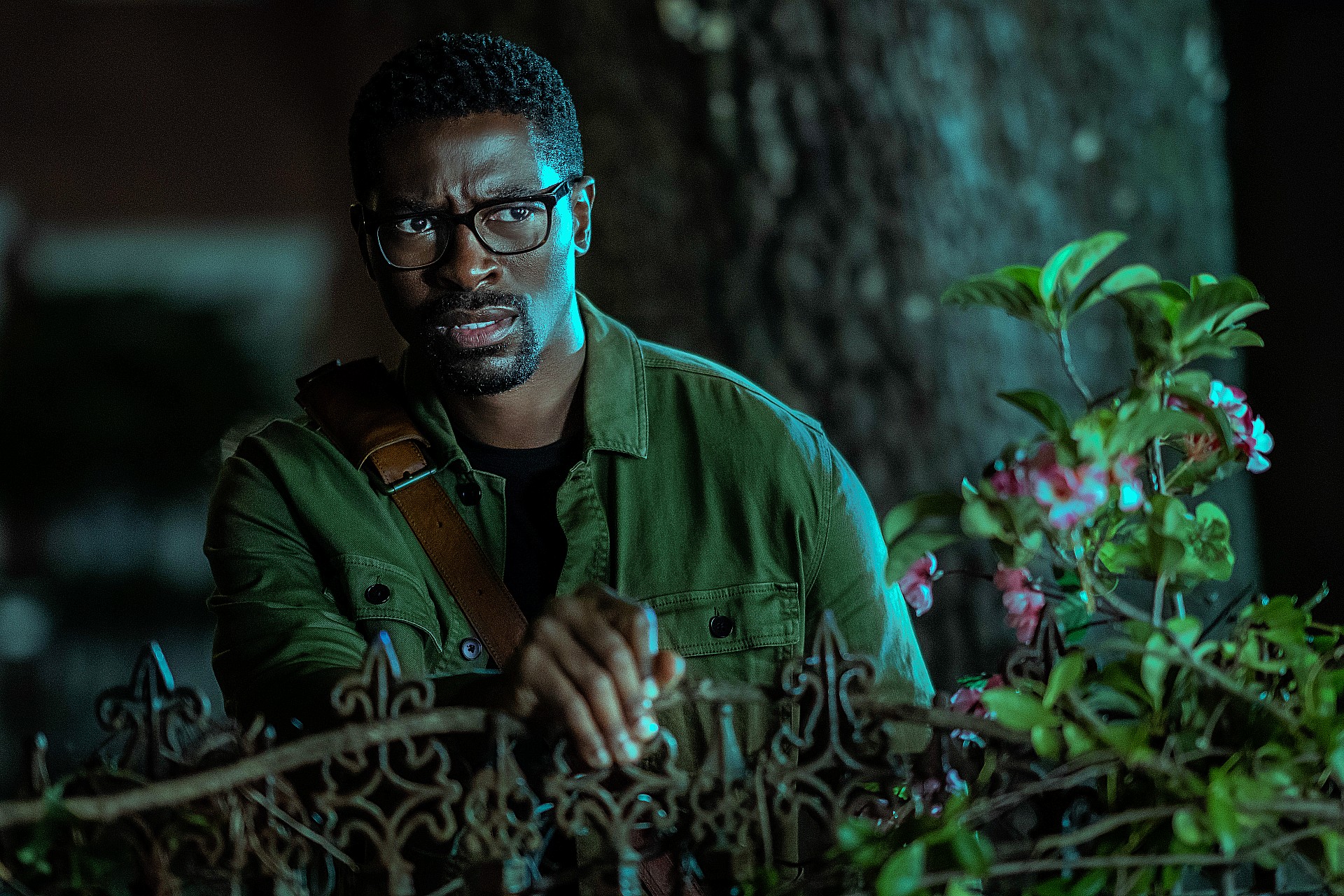 The agent, Ciprien (Tongayi Chrisa), of the Talamasca called Ellie back and sounded positive that while Rowan was coming into a greater power, Lasher was still tied to the Mayfair house in New Orleans 2000 miles away from her. Ellie’s concerns didn’t vanish, however. She wondered who would protect Rowan from Lasher when she died. Ciprien was quick to step up as that person. Instantly, I was ready for him and Rowan to meet. 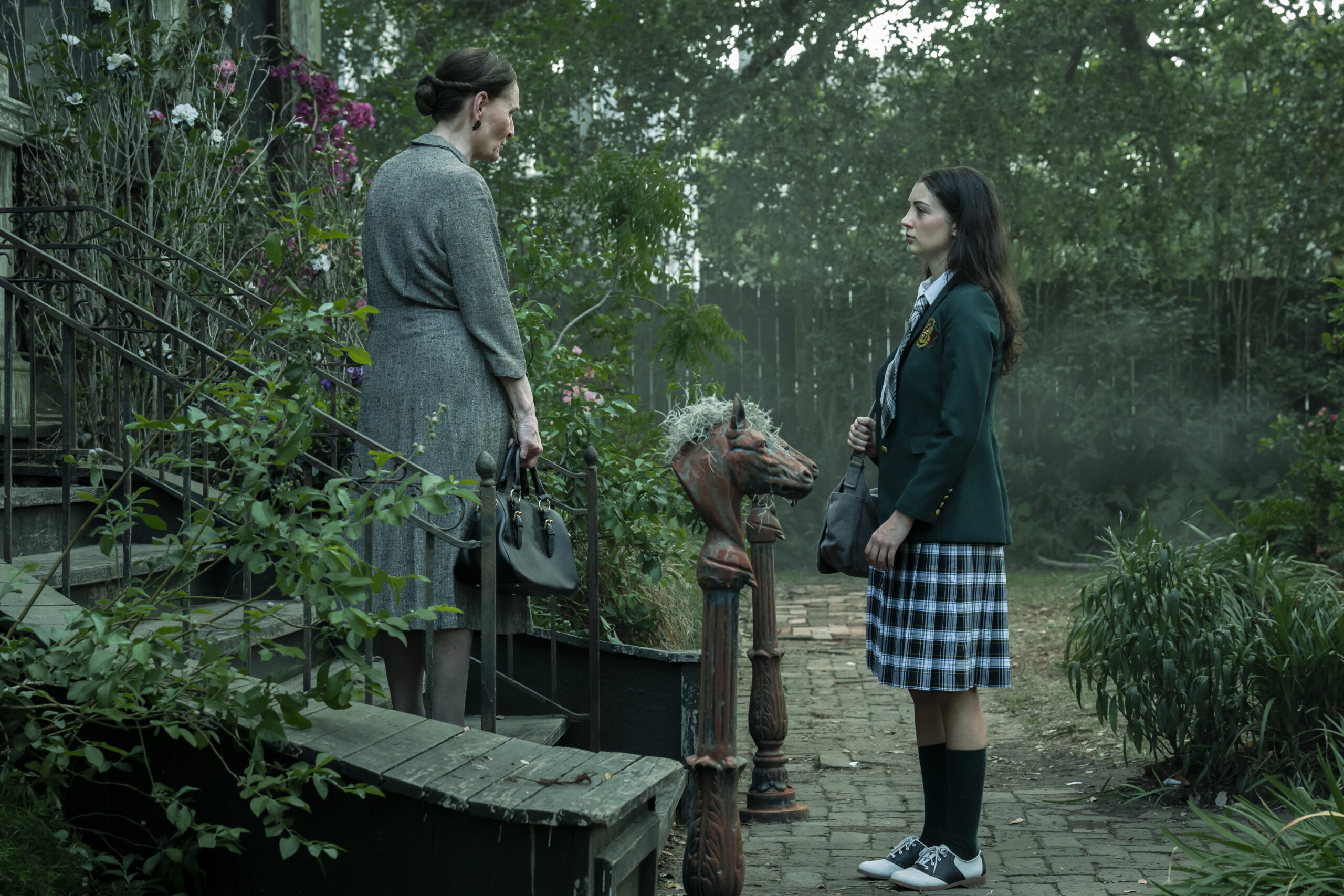 The episode worked in the present, but also through flashbacks similar to the novels. In a flashback of a young Deirdre (Cameron Inman) barely out of teen-hood, her aunt struggled to keep her safe from Lasher, who obviously visited her many times. He’s known to have visited many Mayfair women and flirted his way into their lives.

During one of many Mayfair parties, Deirdre is working her relatives over to learn more about her mother from uncle Cortland (Harry Hamlin). Many believed her mother jumped from a balcony and killed herself, or at least that’s what the Mayfairs tell everyone. Knowing how mysterious and mystical this family is, I don’t believe it either. 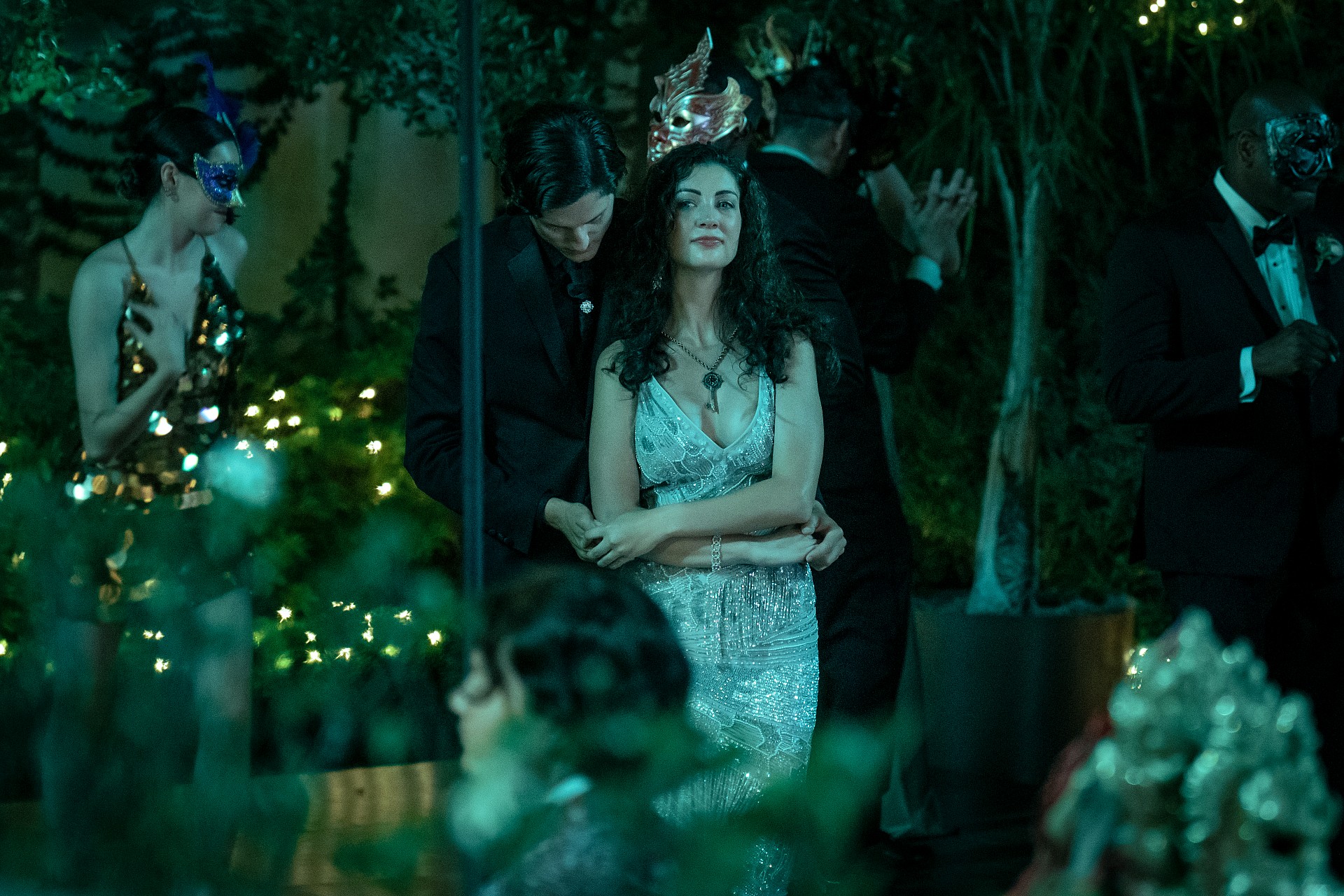 Deirdre was quickly swept away by a male suitor and pulled into a passionate thrall. Things turned dark during their heated intercourse when her suitor, Patrick, is revealed to be possessed by Lasher. Talk about going from steamy to ill real freaking fast. 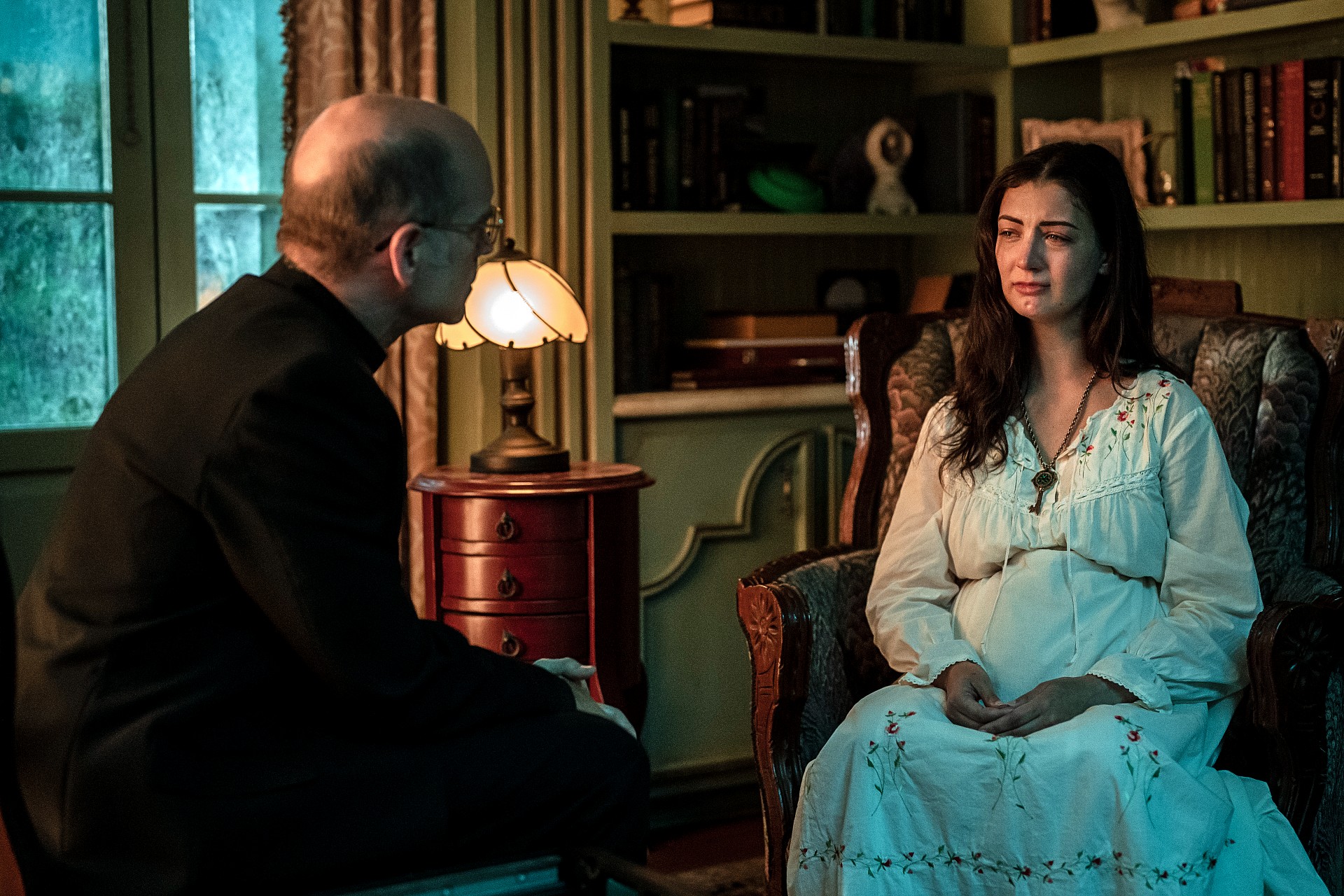 It wasn’t long after that the Mayfairs killed Patrick (off-screen sadly) and Deirdre was revealed to be pregnant. In the books, a Mayfair witch impregnated by Lasher typically experienced an unnatural pregnancy period, so I’m assuming that was the case here.

A preacher was called to tend to her, but he wouldn’t believe her when she told him the truth. While an exorcism would’ve been interesting, I was glad when he was sent on his way.

Deirdre decided to follow in her mother’s footsteps to jump off the balcony but was quickly stopped. Lasher kept her from falling to her death. He wanted her child to be born. He seemed desperate for it. To lay claim to it and on her.

He then offered to show her his true form. For if she could handle it, he would be hers forever. Though he shape-shifted into many inhuman shapes with nothing definitive, Deirdre remained unmoved and was willing to remain with him. As she decided, her water broke into a bloody gore.

If I’ve learned anything from moments like these it’s that you never make any kind of deal with a demon no matter how desperate you are. That, and it’s one hell of an omen for your water to break with a blood spatter. 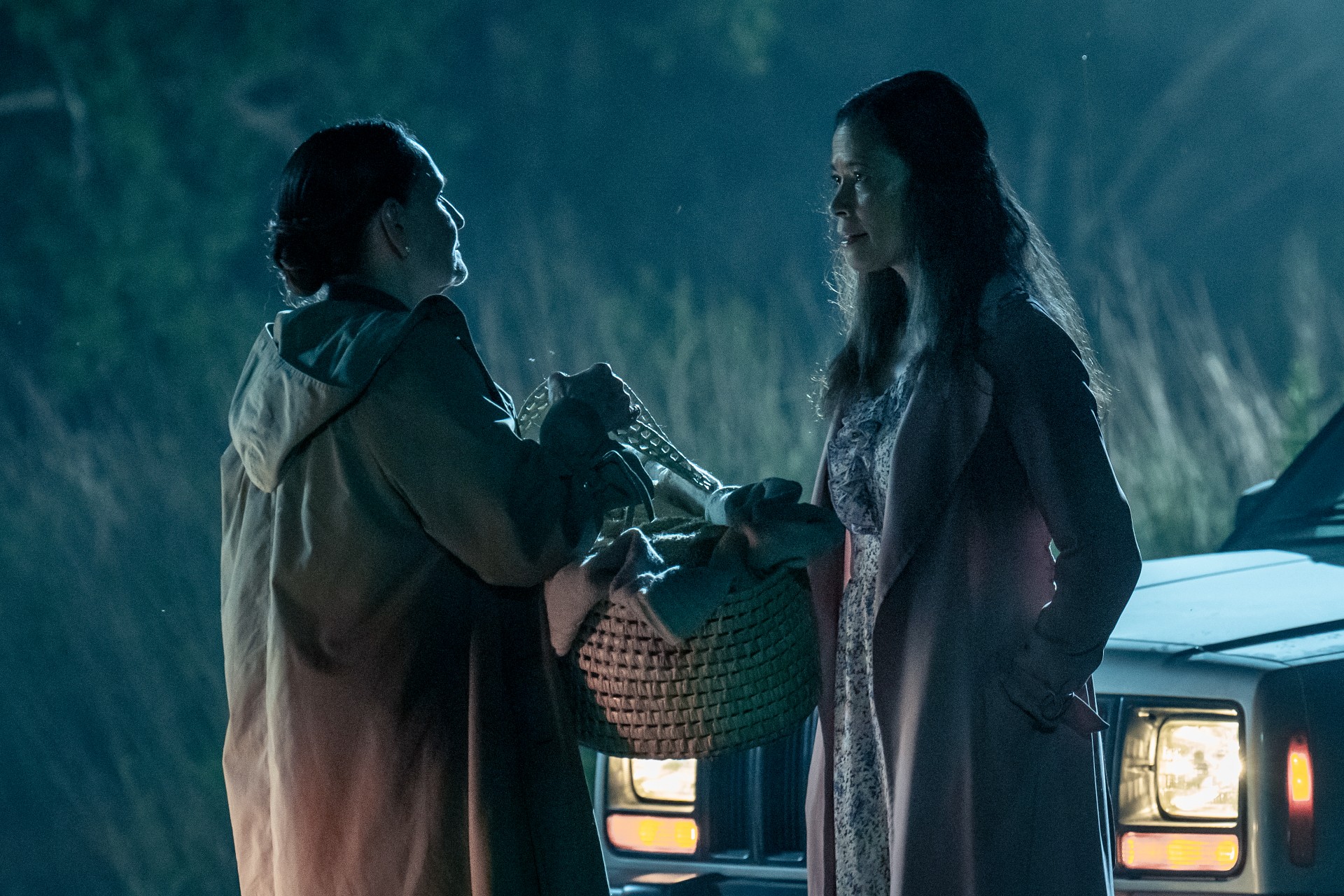 The end of the episode was emotional. The past and the present clashed. As Deirdre gave birth, Ellie was dying.  Rowan was revealed to be Deirdre’s daughter. Aunt Carlotta had sent her away with Ellie who was also a Mayfair witch in hopes of ending Lasher’s hold on the Mayfairs.

Ultimately, the attempt was a failure. Upon Ellie’s death and Deirdre being released from the hold of a family heirloom that tethered the bearer to Lasher (because her doctor wasn’t very bright), Rowan was no longer safe from Lasher. More so, her identity crisis and loss of Ellie put her in an unstable state of mind, giving Lasher the perfect opening to taunt her.

What did you think of the premiere? Let’s chat in the comments below and don’t forget to follow us @capeandcastle on Twitter!