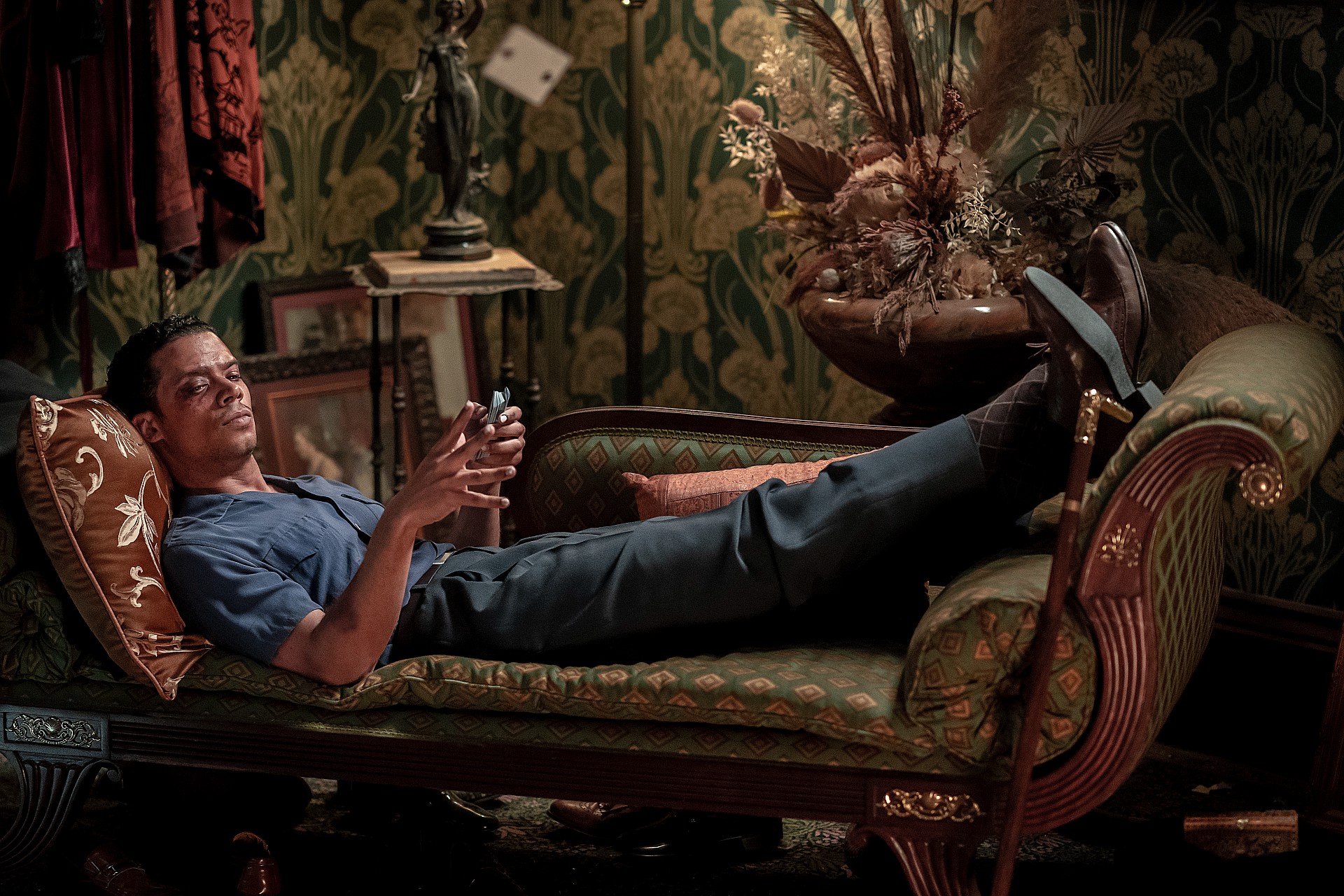 Last week (review here), Claudia ventured out on her own and discovered that Lestat was right. Some vampires are more vile than good. Louis refused to let Lestat remove Claudia from their lives, resulting in a fight that left Louis in shambles. This week, Louis and Claudia recovered together as Lestat tried to weave his way back into their lives, vowing he had changed.

In the wake of the beating taken by Lestat (Sam Reid), Louis (Jacob Anderson) suffered multiple injuries from broken vertebrae to being blind in one eye for weeks. In a pause during the interview, Daniel (Eric Bogosian) took his treatment for Parkinson’s. And of course, he did it with a side of sarcasm that I find delightfully balancing with Louis’s soothing demeanor. He didn’t pity Louis or his heartache about forgiving Lestat for beating him because he was his maker. Neither did I.

He also asked some logical questions about vampiric abilities. For example, could all vampires fly?

Apparently, the world of vampires (and the show) would keep it shrouded in mystery. According to Louis, you were either gifted with it or not, and only time would tell if it was an ability that could be harnessed. Louis couldn’t fly.

I can’t be too mad about the simple answer Louis gave. While it gives vampires uniqueness and even a sense of individuality that they don’t all have the same abilities, it also allows the show to save on having to show every vampire with every single ability. Plus, if vampires possessed every single power, they’d be too powerful. We can’t have that, can we? 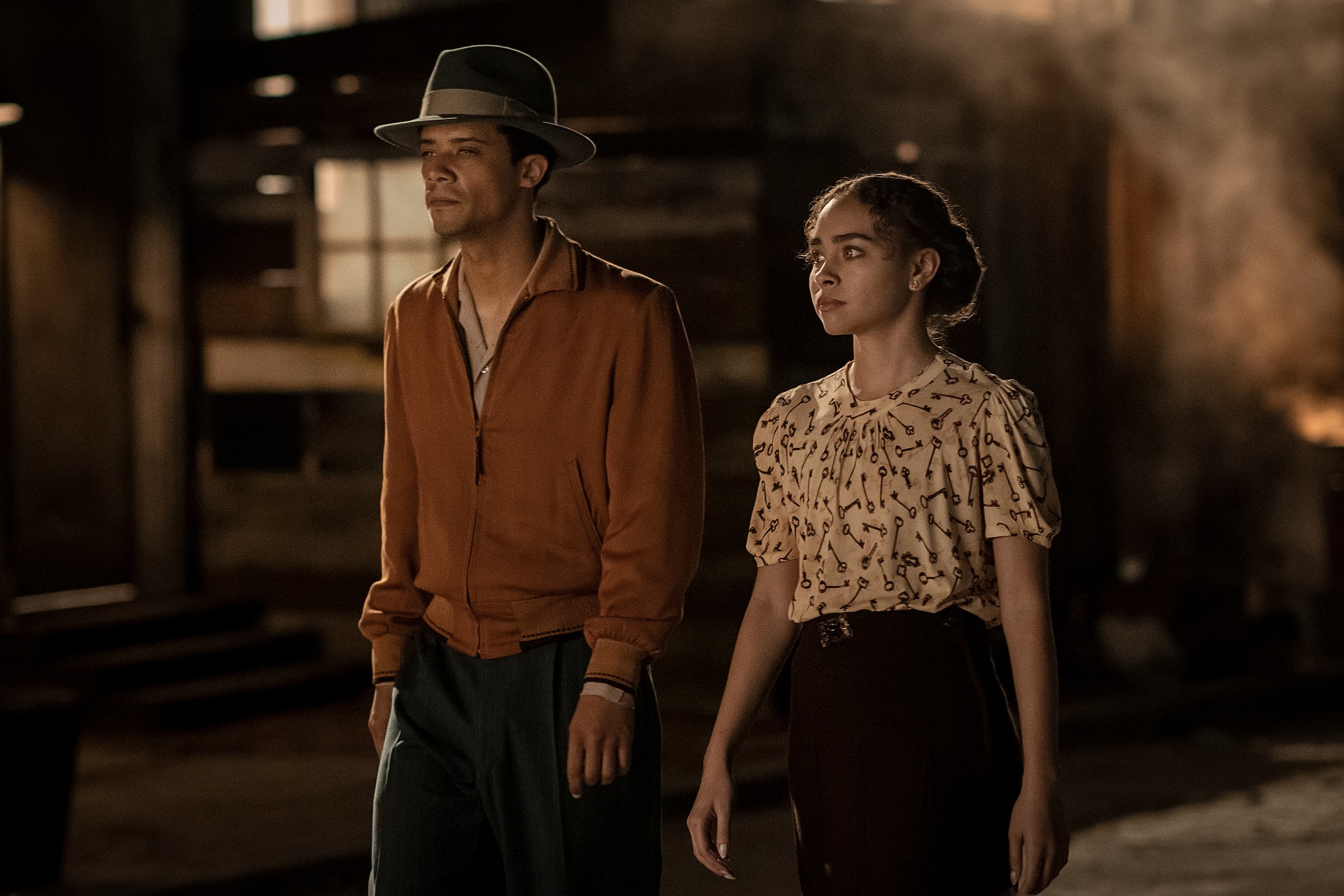 The interview continued at the start of the 1930s. Both Louis and Claudia (Bailey Bass) had some rehabilitation to work through. Lestat was exiled from their home and no apologies were accepted. Even when he tried to offer up a special gift, they only responded with Lestat’s coffin being tossed from the second-story window. That wasn’t just an F-you, but they took away the place of solace and safety away from the sun he had.

When Lestat tried to work his way back into Louis’s life, professing that he wasn’t an abuser, that he wasn’t himself, and that he would never do it again, it fell on deaf ears. It did until Lestat had sent Louis a special music composition, the first he’d created in over a century. In the duet, Lestat’s lover sang opposite of him, instilling a rage that was enough to make Louis the jealous one.

Louis taking Lestat’s toxic ass back wasn’t my favorite moment in the show. Though spectacularly done, I just can’t accept Louis returning to his abuser. It broke my heart. It shattered the progress that he and Claudia made over the years.

But, it’s as Louis said. The bond called out to him and he could resist any longer. That bond won over his broken heart.

Amid making rules in order for Lestat to be welcomed back home, Lestat revealed who made him. A vampire named Magnus. It was a vicious creation. This memory was a vulnerable one for Lestat, but in faith that he loved Louis and held regret for his violent actions, he shared his origin. He shared the violence and it was perfectly dramatic and nearly believable. Even the part where Magnus died tragically. 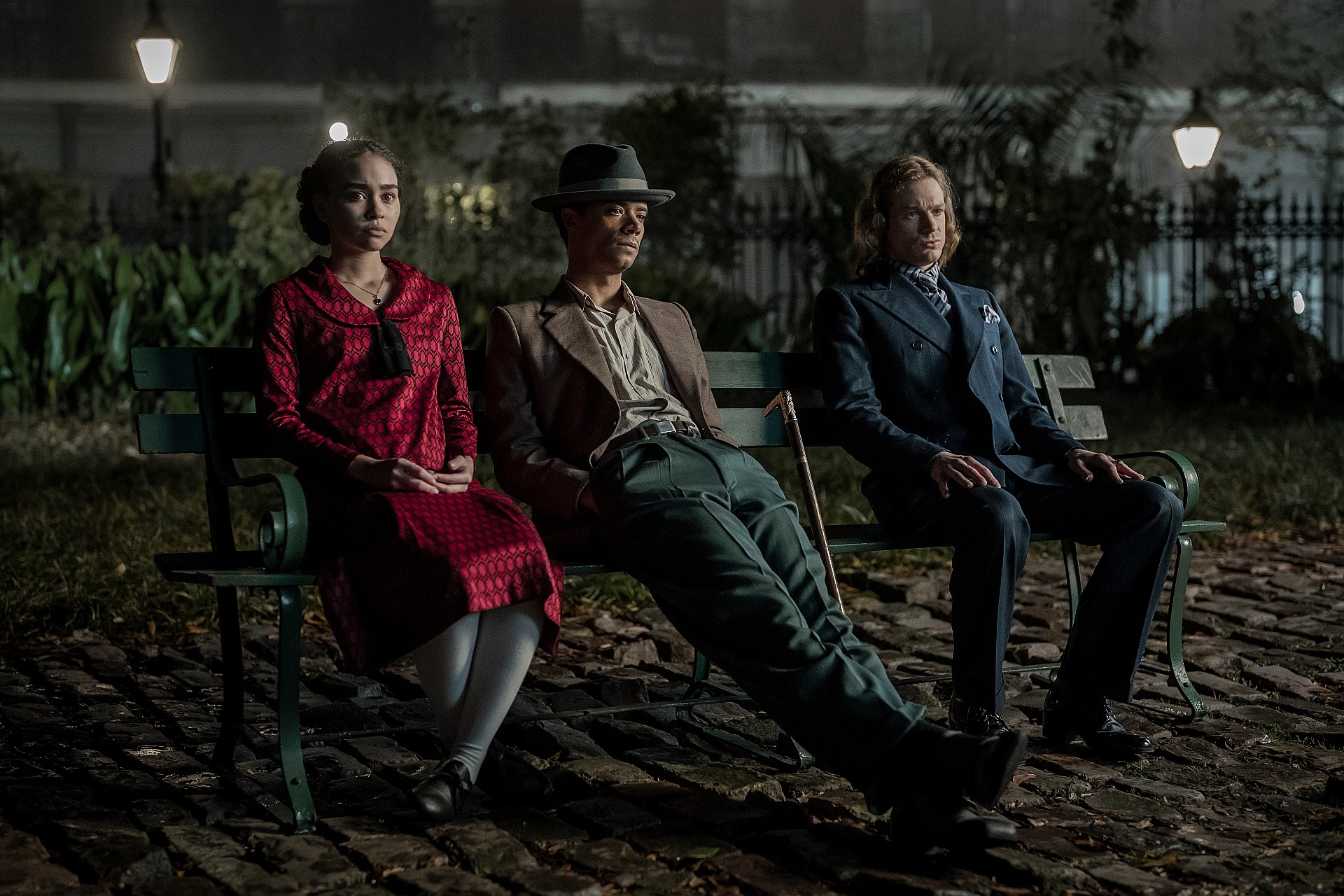 While I was moved by the short tale and it was enlightening, I still don’t go for, “I was abused, so I abuse others” type of trope. It’s gross and I don’t believe in blaming others for what you did. Just take responsibility, Lestat.

The familiar and unspoken tension of unhappiness returned to the family and so did the lies. Both Louis and Claudia found themselves once again enduring Lestat’s ugly ways. Claudia even wondered if it was Lestat who killed his maker, Magnus. With how skilled of a liar Lestat is, I believe it. 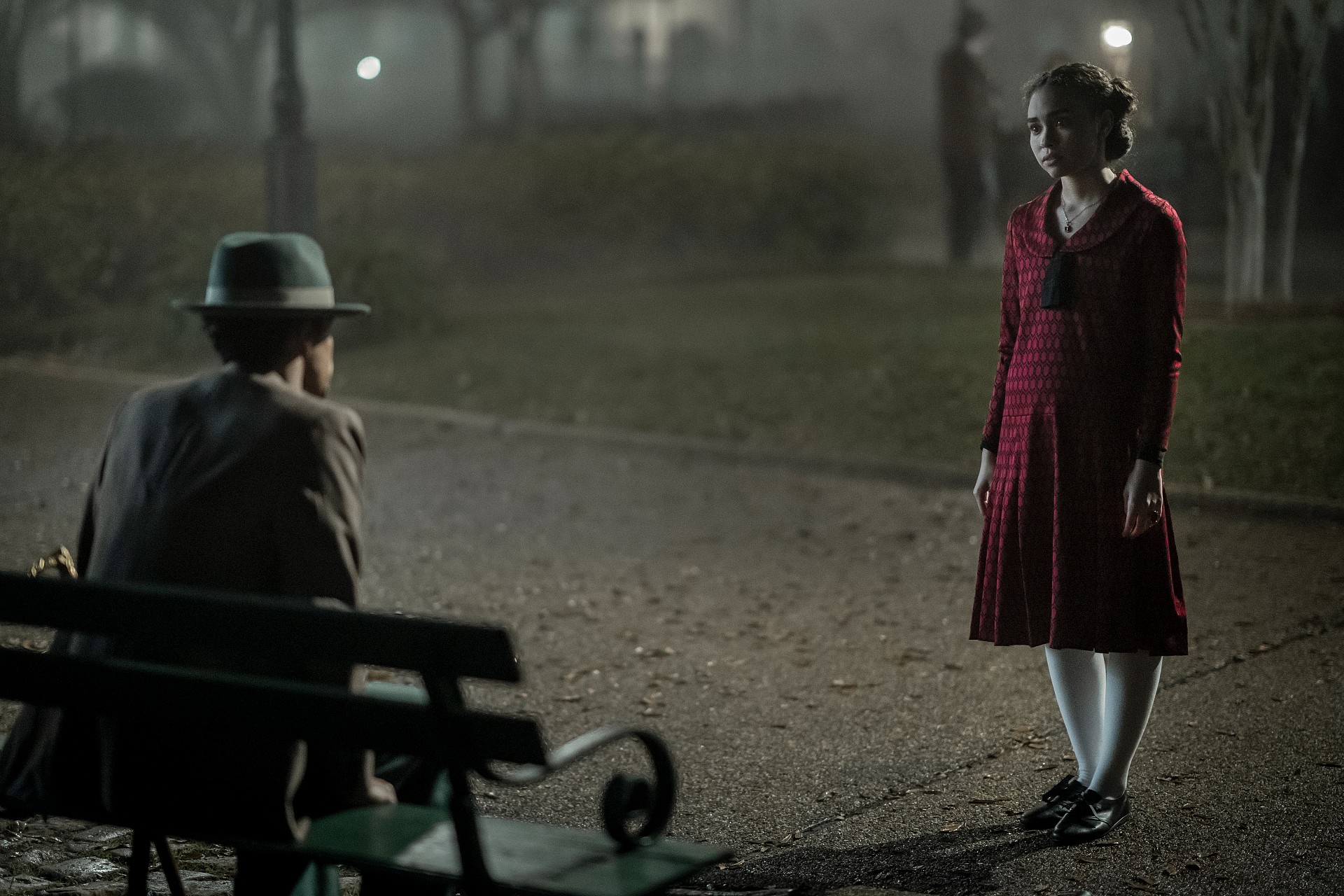 Louis was stuck in the middle between Lestat and Claudia as the two took cheap shots at each other over the years. Claudia took her digs at Lestat about his maker and the losses of loved ones, and I almost thought it was overboard until it was revealed that Lestat was still with his lover. This is the same lover that he claimed to have killed for Louis and Claudia as per one of their demands in order for him to be welcomed home. Though he swore to never lie again, he still did it. What a big surprise.

Though numb to it, Louis couldn’t bring himself to call Lestat out on it, but he couldn’t let it go either. Personally, he and Claudia should kill her themselves if she’s a tumor on the vampires’ lives.

Claudia couldn’t keep standing by, letting Lestat disrespect the two of them. She wanted both her and Louis to get away and start a new life away from him. She’d even planned their way out. They’d take a train out of town, but Louis feared he’d do nothing more than hold her back. He wasn’t yet fully restored to his vampiric glory and he didn’t live the way other vampires did.

While she didn’t need him, and he said so himself, that didn’t mean she wanted to leave him. Before sending her off, like sending a child off to college, he instilled his love in her and told her that he believed that she could make it on her own and that she was strong enough to protect herself. Claudia needed this so deeply. She needed a reminder that while she’d been hurt, that didn’t mean she was strong and capable. She just wasn’t a monster. It was a beautiful scene, and I might’ve gotten a little teary-eyed. Just a tad. This duo is one of my favorites. 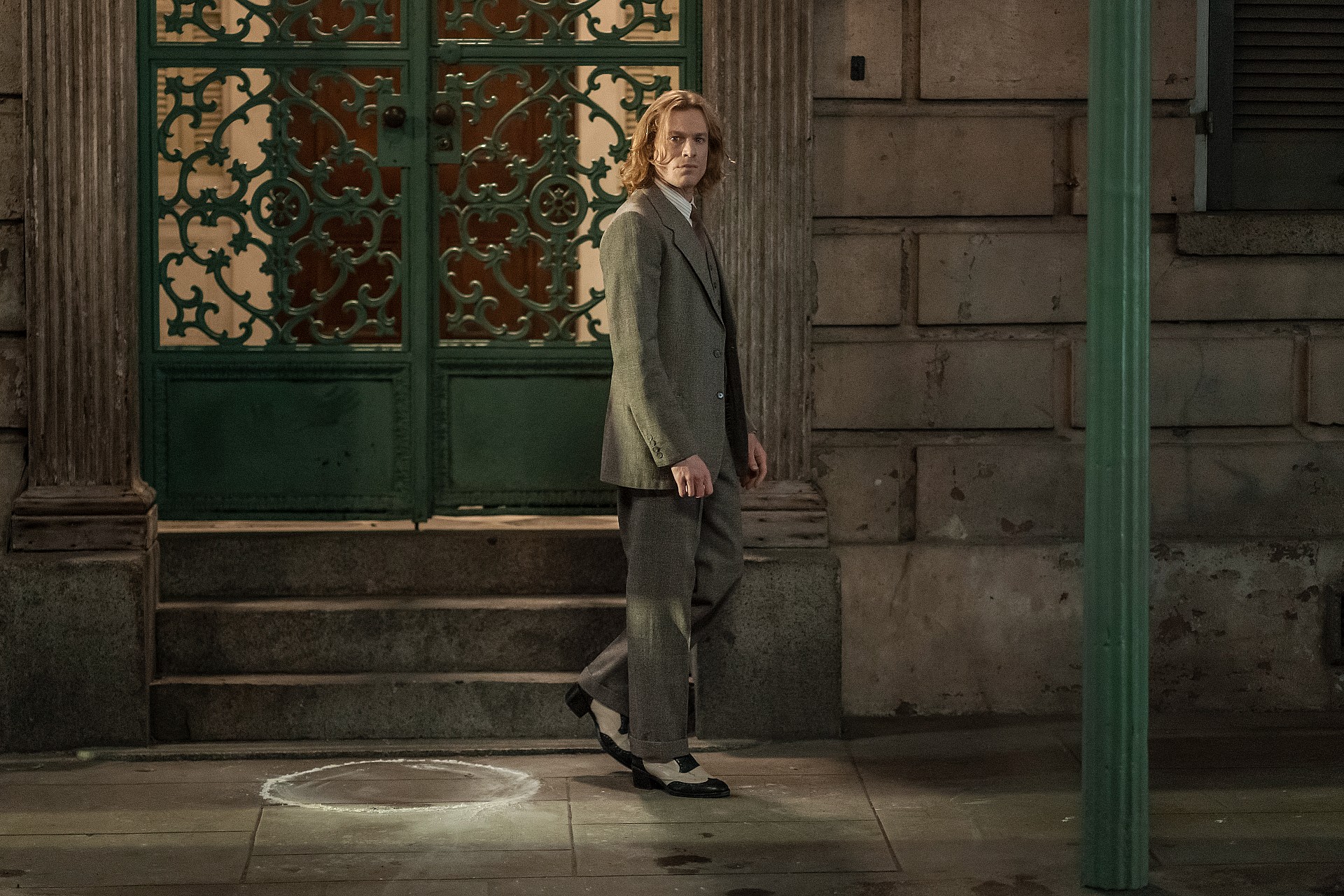 Back to the Crypt

As the 1930s went on, Louis debated “teasing” the sun. Even after all this time, he hasn’t found his unlife to be fulfilling and he didn’t want it. Still, he couldn’t do it, not on the night of Claudia’s leaving. It was good that he didn’t greet the dawn. When he came home, Claudia was there. Lestat had all but dragged her back. Though she’d made the train and had tucked herself in the caboose, he had jumped on and utilized his talent for horrifying theatrics and manipulative threats.

Lestat claimed that Louis needed her. He believed his own lie about so deeply that he even tortured her with his knowledge of Bruce. He sealed her imprisonment under his thumb with a threat to kill her if she tried to leave again. Much like it was with Louis, he refused to let her go and to be happy.

This dark turn solidified Claudia’s hatred of Lestat. This was the final nail in his coffin. She tried to reach out to Louis through their mind connection, but he was resistant. She wanted to kill Lestat and so did Louis. He wouldn’t say it, but it was true. Honestly, so did I.

Lestat has proven time and again how violent and manipulative he is. The violence at the end of last week’s episode isn’t the only abuse both Claudia and Louis have suffered. Lestat claims that he loves Louis and that he does everything for him, but his selfish acts that hurt others and typically end in outrageous rage or manipulative threats that have deadly ends. It’s become an endless cycle and Claudia was determined to break it to save both her and Louis.

The only thing that makes me nervous is, will she succeed? 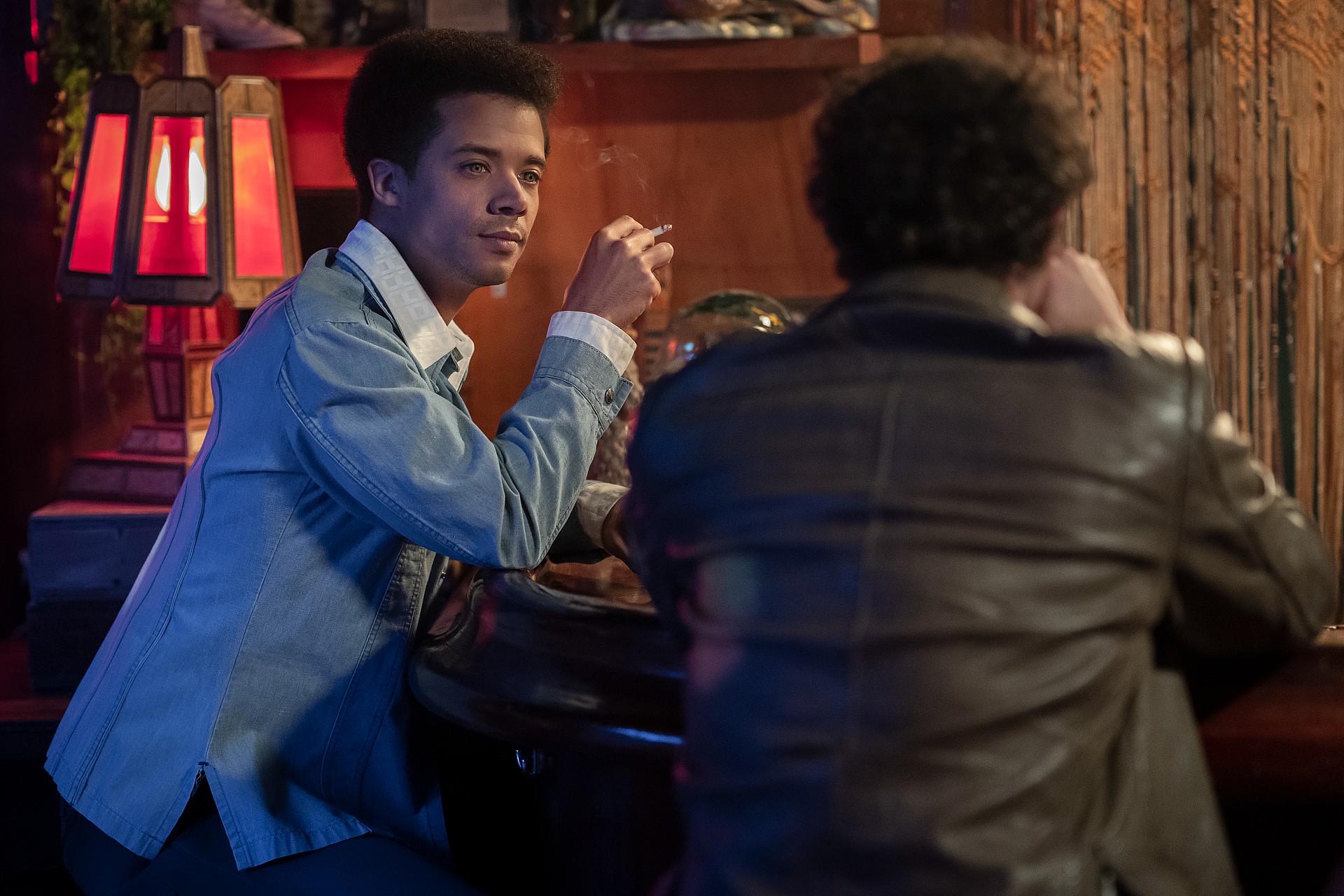 Dreaming of a Past Life

Toward the end of the episode, Daniel had fallen asleep, exhausted from his treatment. From the past, the show shifted into a dream. Quickly, I remember Louis asking Daniel about his dreams at the start of the episode.

In it, Daniel revisited the point in his own past when he met Louis for the first time. They were in a bar and Daniel was looking for a score of drugs, but what he got was an offer of a lifetime.

Now, in dreams, it’s not uncommon to be shaken by questions that need answers.

Throughout the show, Daniel was faced with some of those. Did he still want to be turned into a vampire?

What shook Daniel from his dream was realizing that Rashid had been there that night in the bar as well. Was he still human then, or had he been there, hunting with Louis? Or is this confirmation of the fandom’s biggest theory? That Rashid is in fact the vampire Armand and this is Louis’s hinting and plea for Daniel’s help? After highlighting vampiric abilities in this episode, is it possible that one of Louis’s is to be able to sway people’s dreams? Is it too crazy? Am I just losing my mind because that was a hell of an intense way to end an episode!?

Let’s find out in the season finale.

What did you think of the latest episode? Let’s chat in the comments below and don’t forget to follow @capeandcastle on Twitter to keep up with the live-tweet and reviews for the show!