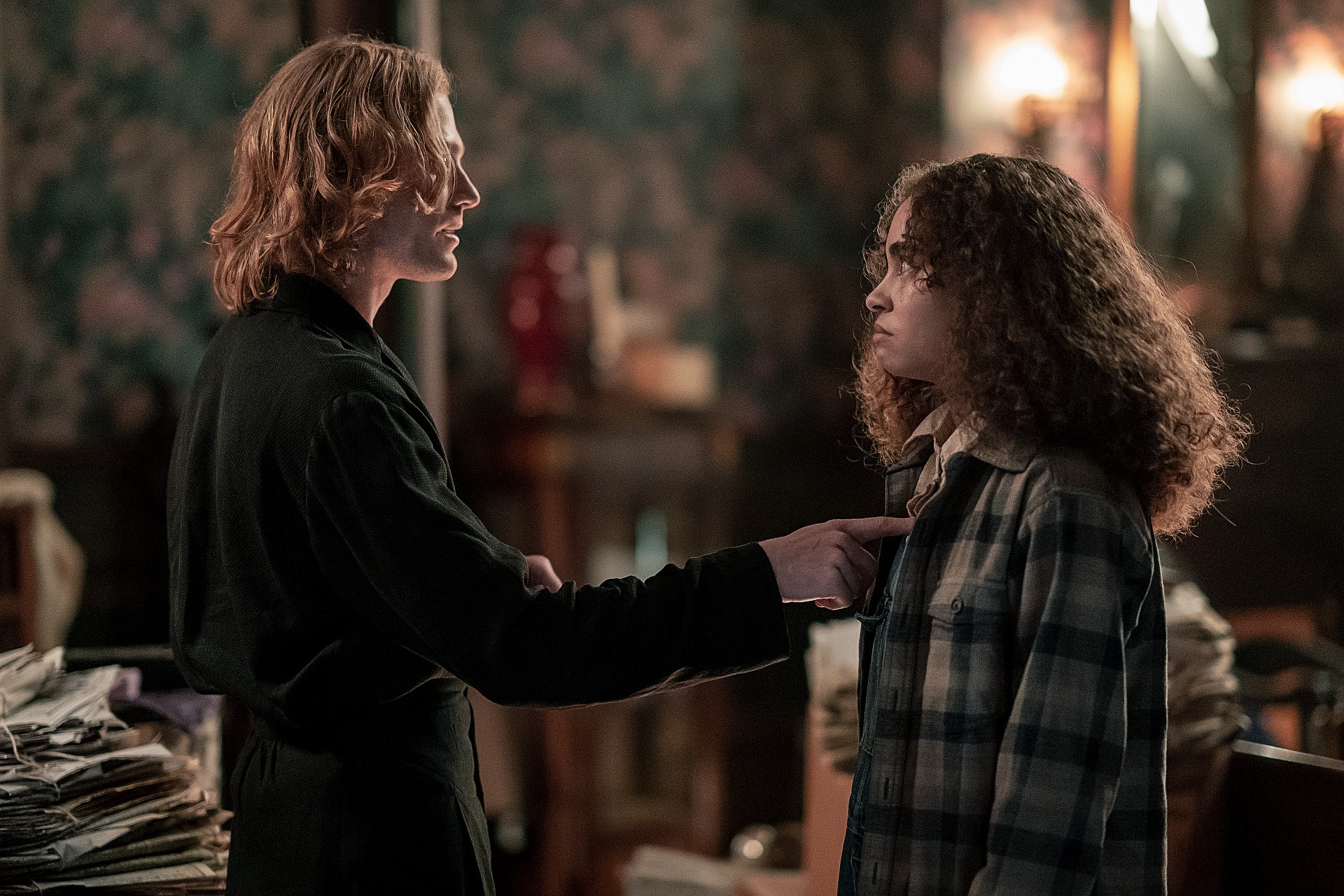 Last week (review here), Claudia got lost in her first love and lust and accidentally killed a young man. Louis and Lestat struggled with parenthood. This week, Claudia strikes out on her own and discovers that Lestat was right about vile other vampires can be. Still, she couldn’t leave Louis behind.

The episode began with Louis feeding from Rashid (Asaad Zaman) while Daniel (Eric Bogosian) continued to read from Claudia’s (Bailey Bass) other journals. As he read he came to discover that Claudia had written down the last words each of her victims spoke. Whether she wrote them down out of enjoyment or guilt, was unclear. Daniel felt distaste toward this journal specifically and its morbidity. Rashid was quick with the judginess. His commitment to Louis (Jacob Anderson0 and his family and memory is honorable, but sometimes a bit much.

Looking past that, it is commendable how much Rashid loves and all but worships Louis. However, it is also apparent how his life has become forfeit for that worship. Outside of his religious beliefs, he lives for nobody and nothing but Louis. He quickly comes to Louis’s aid and he works hard to make sure his blood tastes appealing to him.

I can’t say that Louis does the same for Rashid. And it’s strange to say, but Louis of the now is much like Lestat (Sam Reid) of the then. The only major difference is while Lestat was emotional and succumbed to being monstrous with his abilities, Louis wields those abilities with restraint and humanity. Though he’d lost so many of the ties to that humanity, it appears he’s reclaimed it over the centuries. He’s not the only one to do it across TV either. Godric of True Blood and even Stefan Salvatore and Caroline Forbes, and others on The Vampire Diaries have rebuilt their humanities as well. A very common and honorable trope; the reclamation of a soul. 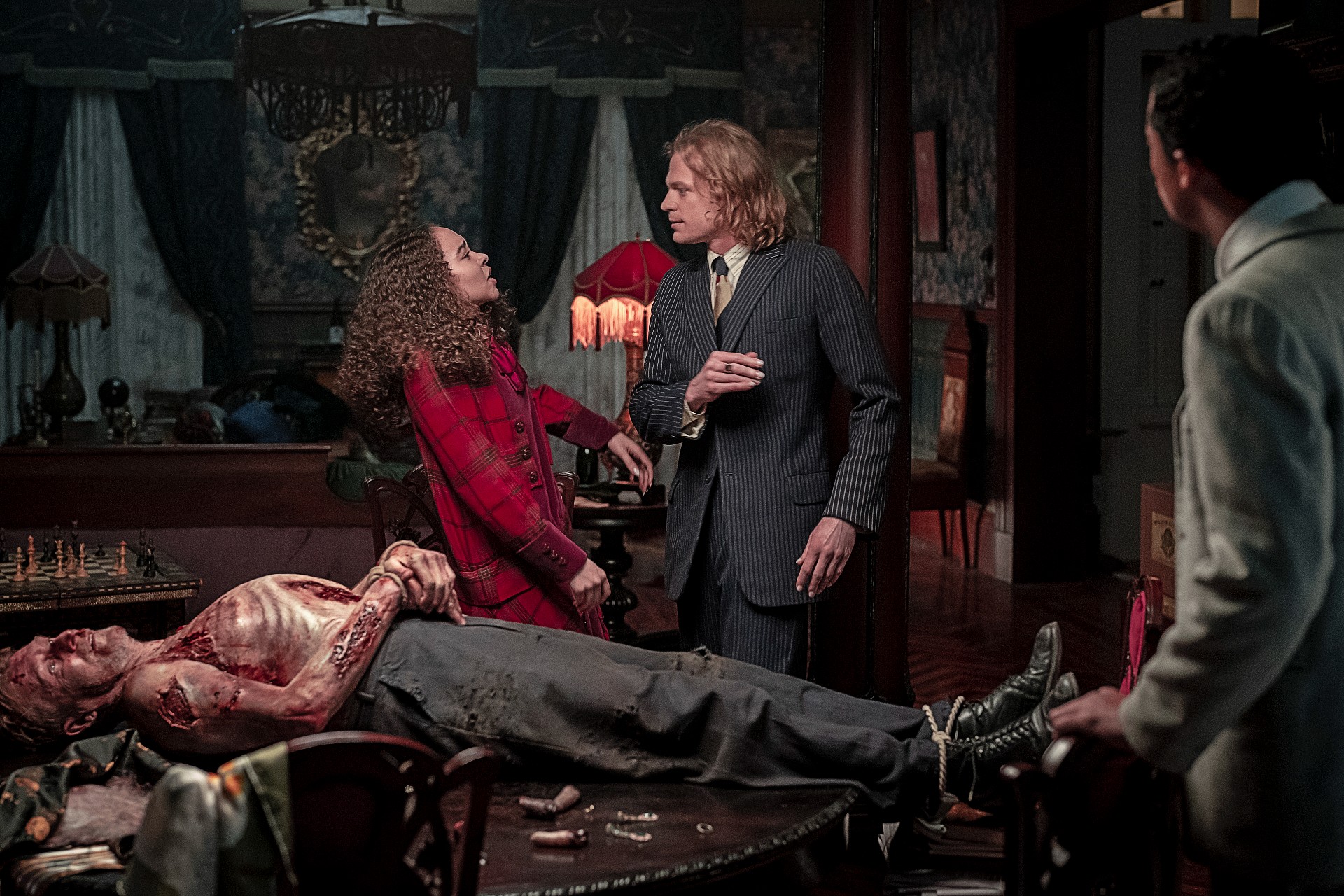 Louie’s tale continued with Claudia having given Louis and Lestat the silent treatment and making them think she was starving herself. This was a great imitation of a teenager all but screaming, ‘You’re ruining my life.!”.

With a quick flick of the wrist, Lestat ripped her coffin lid up, revealing that she was gone. She’d been sneaking out and getting rebellious. While this is always entertaining because of the hijinks and the fact that parents need to be reminded that they were a teen once, she was a vampire and that made this rebellion deadly.

It was reasonable that Louis and Lestat were concerned about her. Granted, it was for separate reasons. Louis, because that’s his daughter and he only wants what’s best. Sweet, right? Lestat was only worried because she could reveal what they were and seemed so ungrateful for the gift of eternity and power he gave her. No so sweet.

Outings of the Vile Kind

The diaries she’d left behind expressed her unhappiness with immortality as a virgin teenage girl and with Lestat and Louis. Not only that but she’s been on quite a feeding frenzy. Though she dumped the bodies out in the bayou, they came back to haunt during the next storm.

As they were found, there were random body parts missing. A toe here. A finger there. And only ever just one.  Like little trophies. Quite gory, if you ask me. It definitely highlighted the ‘vile hunger’ part of the episode. Couldn’t she have found a different hobby? Much like Louis’s display of the councilman in 1×03, Claudia’s victims and the pieces she kept, threatened to out all three of them. 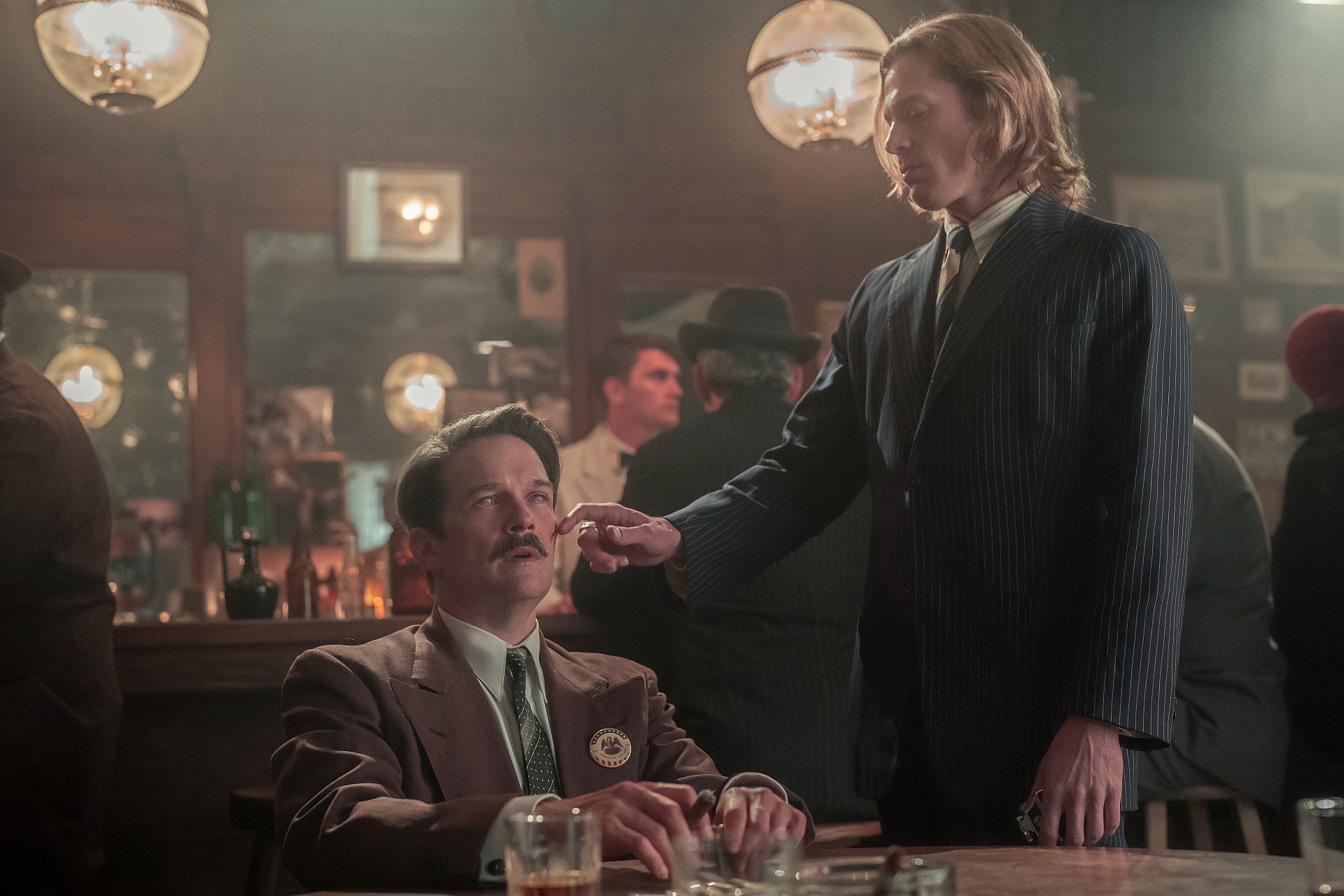 While trying to keep their nature under wraps, Lestat and Louis are confronted by Tom, a politician. He hoped to gain their support for his campaign. Louis discovered really quickly that Tom didn’t just want their support. He wanted to confirm his own suspicions that they were behind these deaths.

With that knowledge, Louis let Lestat handle Tom. He left a warning mark, an X carved into Tom’s cheek. When they arrived home, a cop was already investigating their home. While Louis and Lestat kept the cop busy, Claudia tried to hide the body parts she’d kept as trophies from her victims.

Louis and Lestat faced interrogation that targeted not only their sexualities but their parenting abilities and the possibility of what they were.

Though Lestat and Louis played a game of “that’s your daughter, not mine”, Claudia finally confessed that she’d been trying to make a vampire of her own for her to love. She found it unfair that they had each other and Lestat even had a human lover, but she had no one. She was all alone. And, as a teenager, those emotions are sky-high and amplified. She was in the midst of growing and it had been cut short.

But, as time wore on and she adapted and learned and understood the more mature parts of life, it was tragic to see her maturity grow and everything else remain the same. She didn’t even have the same power Lestat and Louis had. If given enough time, would she ever?

All of this was enough for her to pack up and leave. Louis admitted to Daniel right then that Claudia had been made out of remorse. Rather than giving her a chance at a hospital, he took her and had her life taken from her for his own gain. Louis wasn’t happy about what he’d done and he didn’t want her story shown in any kind of false light. Daniel was right when he said that it wouldn’t matter what Louis wanted.

A Simmering Pot of Resentment

Lestat wasn’t shy about being glad that Claudia was gone. He was ready to start anew and even destroy Claudia’s room. All of the resentment and ugliness Louis and Lestat felt toward each other came back tenfold.

Lestat grew colder the more Louis kept trying to find Claudia. Each night he’d send out mental apologies and wish for her to come home. Elsewhere, Lestat drowned his anger that Louis wanted Claudis more than him. 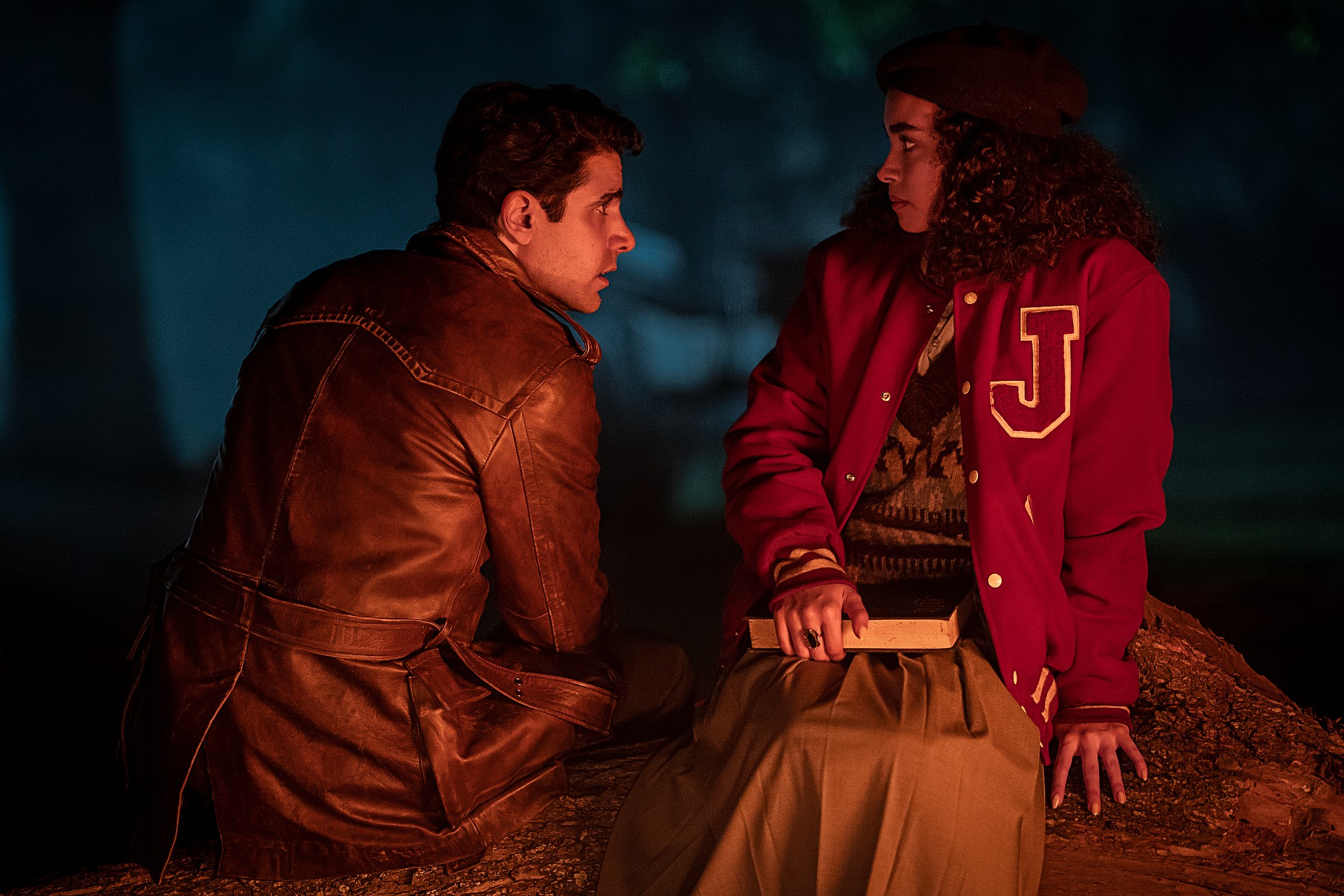 Of Courtesy and Vile Manners

While Louis was sucked into a depression and dove into a hermit life of reading and education, Claudia was living her best life. She didn’t allow the sorrow of losing Louis and Lestat to get to her. Instead, she was traveling from university to university across the nation, reading anything she could get her hands on about vampires. She still had hope that she could find somebody who could help her make a vampire of her own.

She did finally meet a vampire close to her own age, Bruce. He’d been following her for a little while, curious about her…or rather, hunting her. It grew massively unnerving when Bruce revealed that he could hear Louis calling out to her. A major red flag. Claudia didn’t notice. She was too excited about meeting another vampire like her. The dangers of it hadn’t occurred to her.

The evening of feeding took a dark turn when he took advantage of her, much like Lestat warned her would happen if she went looking for other vampires.

Louis refused to let Daniel read the in-depth recollection of these events. These pages had been ripped from her journal in an effort to not humiliate her or exploit her. Though Daniel only wished to get the full story because picking and choosing wasn’t how this interview worked, Louis wouldn’t allow it. He even went so far as to initiate Daniel’s tremors to make his point. Daniel, enraged, smacked the vampire.

Though impressive and bold, I wondered if this was the end of the interview and possibly Daniel’s life. In an autobiography, memoir, or interview, there are the exhilarating and enticing parts, but there are also the tender and sensitive parts as well. I side more with Daniel in this tiff. He answered a call to do an interview and that does require going through the dark parts as well, not because he wants to but because that’s the story, the job. 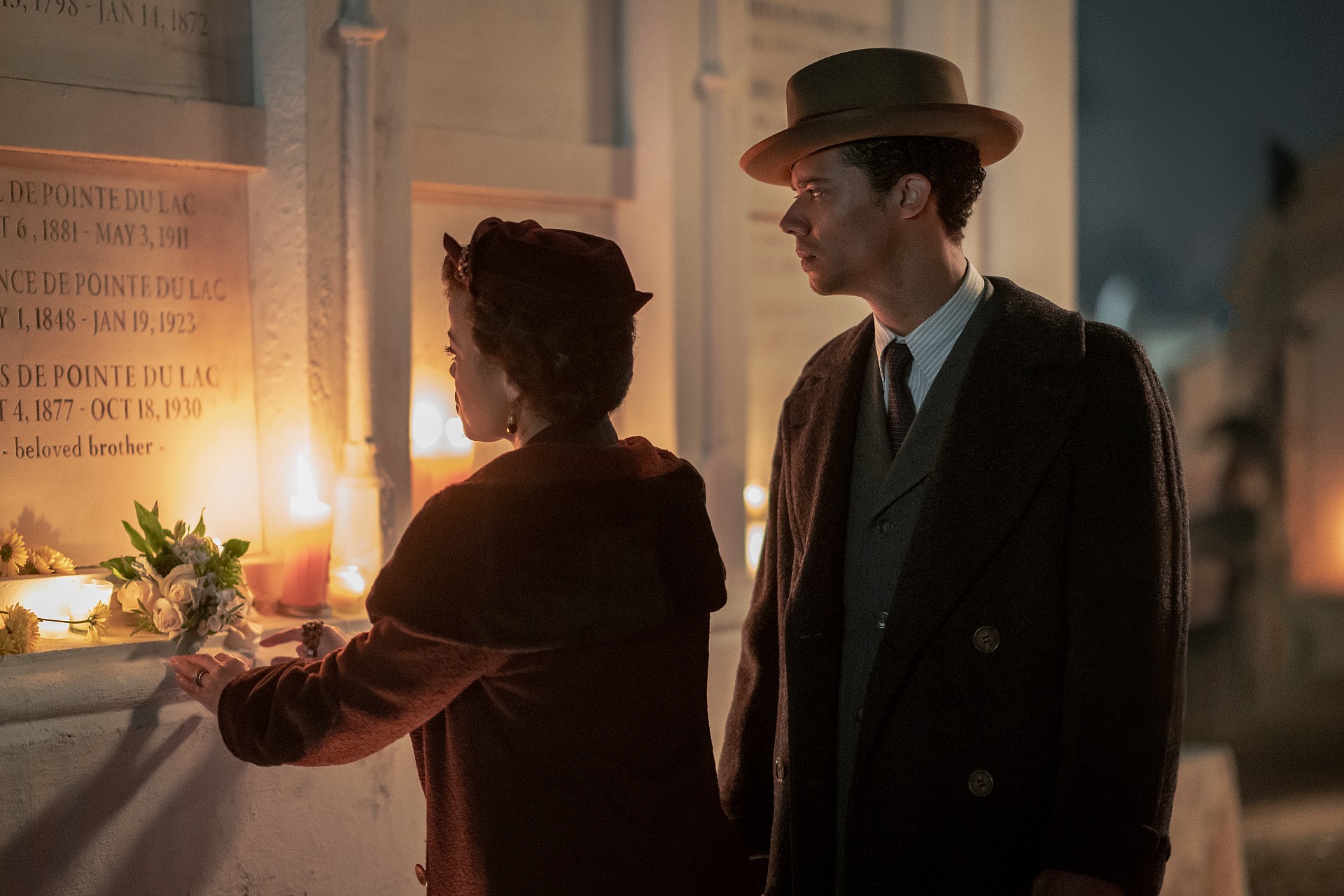 Claudia came home to make apologies after witnessing Louis and Grace (Kalyne Coleman) in the cemetery. She’d heard the heartbreaking conversation of Grace telling Louis that he was officially dead to her. His name etched into the family gravestone cemented that.

At that moment, Claudia knew she couldn’t live without Louis. He’d only wanted a family. She had forgiven him after gaining a deeper understanding. She couldn’t let Louis live such a destitute life under Lestat.

Going home, she offered for him to come with her to Europe where they could study what they were and find a life together. Maybe they’d meet other vampires and find a community. More importantly, they would be free from Lestat.  Lestat did not like the sound of that at all.

The final minutes of the episode turned brutal. Lestat was ready to be rid of Claudia but Louis wouldn’t have it. From Claudia’s POV, the house was turned upside down as Lestat and Louis fought each other. Louis, in an effort to protect her, tried to keep Lestat away from her and keep their fight out of sight so she didn’t have to watch. Still, it was gut-wrenching to hear each hit.

It escalated so much that Lestat flew Louis up into the night sky with his hand dug into his jaw and then let go of him.

Louis survived. There’s no doubt about that. He wouldn’t be partaking in the interview in the present if he didn’t. Still, it was horrifying to see how far Lestat had let his jealousies and unhappiness go. He’d been unable to learn a lesson that Louis and Claudia had learned. You can’t force somebody to love you, let alone live for you. He may have made both of them, but he didn’t own them.

The end of the episode was a devastating one that left my heart pounding hard in its tight cavity.

What did you think of the episode? Let’s chat in the comments below and don’t forget to follow us @capeandcastle on Twitter!