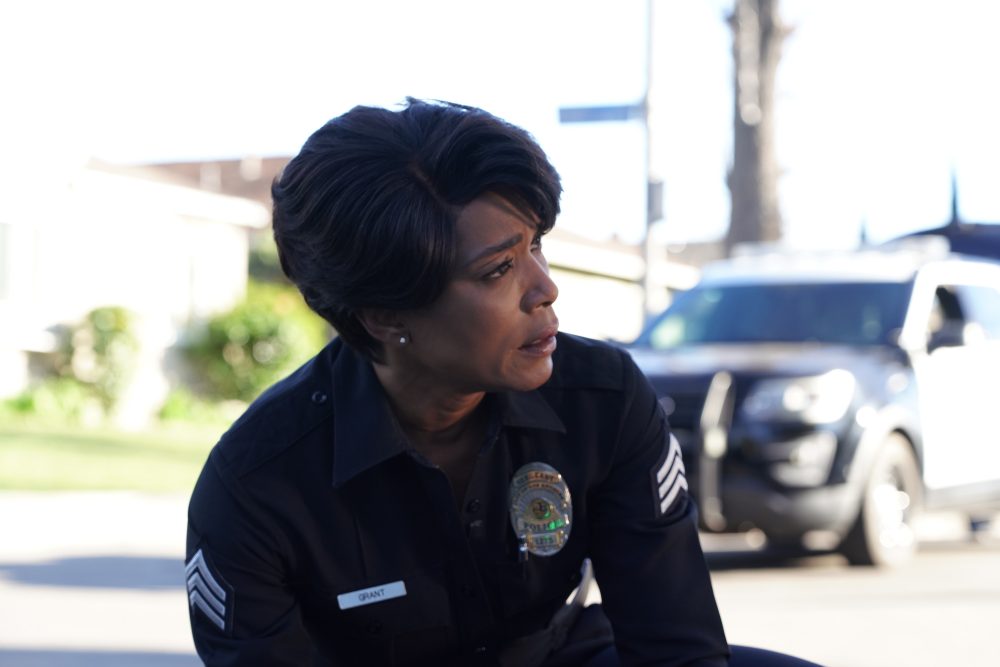 911 on FOX has really stepped it up with their last few episodes and “Dumb Luck” was no different. The episode followed the aftermath of Eddie’s breakdown and how central Buck was in making sure the people around him were okay. He also gives Lucy some sound advice after a daring call has her rattled. Find out what happened in our recap of 911 on FOX 5×14.

One of the first calls the team responded to was from a woman who fell from a penthouse balcony. The team responds, but they almost don’t catch her in time despite how close Buck is to be able to grab her. It’s Lucy who manages to rescue her, having just put her arms out the window in time to catch her. It’s a case of dumb luck, which is the driving theme behind the episode.

Even though she has gotten acknowledged for the save, Lucy doesn’t exactly warm up to the attention. She is ignoring all calls from reporters, including Taylor, which is awkward enough without the one connection they have! She confides in Buck that she keeps thinking of how she could have done the rescue differently.

He gives her some encouraging advice, telling her about his first loss and how he kept thinking of it over and over in his head. Of course, he does seem to forget that the guy who died didn’t want to be saved. But his point is that no matter what happens, they should take the wins they can get.

The episode also focused on Eddie’s journey as he battles feelings of survivor’s guilt. After waking up from a nightmare, he finds Bobby is there, having taken over watching out for him while Buck took Chris to school. They have a heart-to-heart about living with survivor’s guilt, which was a beautiful scene to watch given how they ended things last time we saw them together.

Eddie’s therapy appointment leaves him feeling exhausted and wrung out, feeling as though he isn’t sure it’s worth it to do what he does. Buck, who had been taking care of Chris for him, is a quiet ear for Eddie, but it’s obvious he wants to be able to help him. Also, can we just say how adorable it was to see Buck’s happy heart drawing alongside Christopher’s anatomically correct heart drawing? We’re sure Eddie appreciated it no matter what.

Eventually, after the team comes face to face with the woman they saved earlier in the episode, it sparks a conversation about how the lives they save might impact other people. Hen’s inquiry gives Buck an idea and he goes home to talk to Taylor for guidance.

Of course, he also sidesteps her attempt to meet Lucy, which we know is likely headed for disaster. But he does get her to help him find someone, and that someone turns out to be Charlie.

Charlie is the boy that he and Eddie had gone to rescue after his mom was making him sick. This random act was what led to Eddie being shot. Buck realizes he can help Eddie by showing how well Charlie is doing.

Healing comes in many forms

In fact, he takes Eddie and Chris to a track, under the guise of having Chris ride some horses for equine therapy. Of course, Buck likely also did this for Chris since he has gone through a lot recently as well. But he also wanted Eddie to see Charlie, who has been coming there for months with his aunt and uncle. Seeing how happy the boy has sparked something in Eddie, showing him that what they do ultimately does help.

Buck was an incredible friend to Eddie and he has been taking care of both Chris and Eddie a lot. We just wish he would take care of himself as well since it’s clear he’s focused on their needs rather than his.

We also got to see Hen and Chimney back together, working seamlessly and giving each other a hard time as only best friends can. Jonah is transferred to another team, but then we do see him again on an outing with Lucy. During the scene, he asks about her heroics during the rescue, seeming to make it a bigger deal than she does. And he is also curious about Hen, asking questions about if she misses him.

There is definitely something about Jonah we’re keeping an eye on. Especially if Lucy is unaware of anything going on that she could be missing.

Athena also got a chance to shine in the episode. This is in a case involving road signs being taken. When she finds the culprit, he is hit by a car, but his friend almost refuses to help. She’s stunned than he was more concerned about being arrested than saving his friend’s life. This could go into an arc about how she feels about her job, especially seeing how affected she was over how the young man was doing.

Maddie and Chim also connected in this episode when Jee-Yun gets sick. Noticing her daughter hasn’t been acting like herself, Maddie rushes her to the doctor. It’s suspected there is an issue with her intestines. They wait all night at the hospital for news, comparing their own feelings about feeling like they did something wrong.

Even though they are broken up, it’s clear they care about one another. Chim is quick to make sure Maddie knows she did nothing to cause Jee-Yun’s illness and she barely flinches when he relates his own guilt over accidentally closing the car door on their baby’s hand.

They finally receive word that Jee is okay. The doctor was able to determine her intestines were the issue. Due to Maddie’s quick thinking, they won’t have to do surgery to fix it. Maddie is relieved to know her baby is okay, and we are too!

There seems to be a lot set up going into the last few episodes of the season. We’re excited to see how they develop the storylines from here!

Let us know your thoughts on this episode of 911 on FOX 5×14 in the comments below.