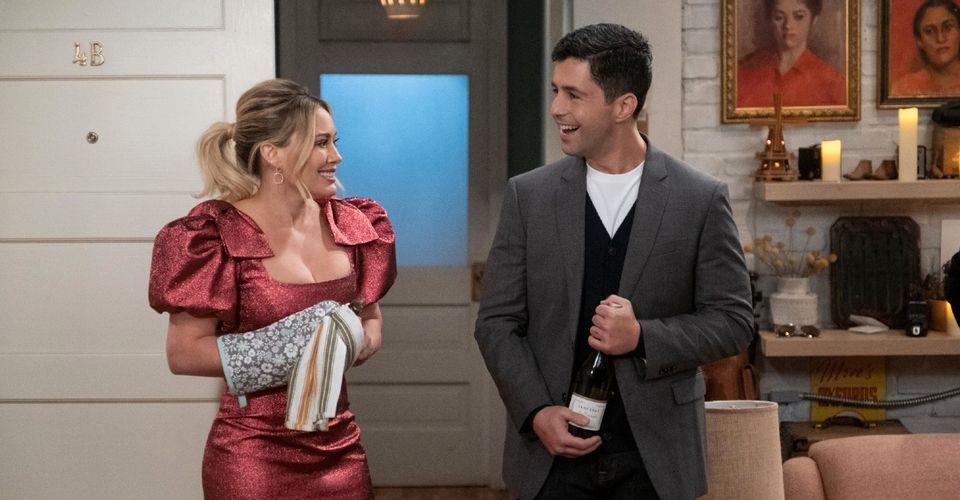 The upward trajectory of quality in these episodes is continuing. With the fourth episode, it seems like ‘How I Met Your Father’ is really finding their footing. I can’t even order the storylines in terms of least favorite to favorite because I legitimately enjoyed all of them. Yes, that does include Charlie. This week’s episode centered around Sophie’s 30th birthday. Keep reading for our ‘How I Met Your Father’ 1×04 review!

“He Was A Real Adult”

We start off with the night before Sophie’s 30th birthday, also known as the night of her first date with Vice Principal Drew from last week. The central theme for this episode is that there are some 30-year-olds who are “real adults,” and then there are others who are not. Drew falls on the side of the “real adult” continuum, and Sophie very much does not.

For their date, Drew takes Sophie to an incredibly fancy restaurant. It’s one of those that doesn’t feature the prices on the menu. I’m dying to know what type of school Drew works at because he may be more “grown up,” but based on his restaurant choices and wine selection, this dude is making a ton of money. Or he has plenty of generational wealth. Regardless, he wins Sophie over with tales of his dog Rue McClanahan. As he gets tipsier, he starts listing off his favorite libraries. He is a giant nerd, and I can’t begin to describe how endearing I find him.

Outside the restaurant, Drew asks to see Sophie again the next night. He knows it’s not cool to ask to see someone two nights in a row, but he does not care at all about being cool. So, Sophie does the only natural thing and invites him to her birthday party the next night. There’s only one major problem.

You see, Valentina has been planning the most epic “Dirrty Thirty” party for Sophie based around the Christina Aguilera music video. There will be kegs. There is some massively ill-advised bobbing for apples in tequila that could cause blindness. It will be trashy as hell. So, in order to impress Drew, Sophie asks for the entire thing to be changed to a sophisticated soiree. 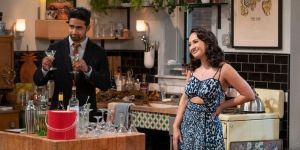 Overnight, the party transforms into a cocktail party. Sophie goes out and buys books to feature in a book nook to make Drew think she reads. The kegs become a signature cocktail. She makes mini-quiches and sets up a raw bar. The dress code changes from “Dirrty” to cocktail attire. Naturally, it is a disaster starting off with Sophie accidentally breaking the heat pipe and turning the apartment into an oven. Drew, being a real adult, shows up the minute the party starts. Sophie doesn’t realize you have to cook shrimp before putting them on the raw bar or else you could, you know, give someone food poisoning. Most of the guests do not see the update in the dress code. It is a truly absurd failure of a party.

However, Drew is smiling throughout the entire thing. He’s just excited to be around Sophie. Eventually, things fall apart when Drew tries to get Sophie’s stuck window open and burns himself on the pipe. While Sophie is doctoring his wound, they walk in on Charlie and Valentina having sex in the bathroom. Sophie gets embarrassed about how they’re at such different stages of their lives.

Up on the roof, Drew tells Sophie that even though he is “an incredibly together person” who makes “overnight oats,” he sometimes feels like he’s missed out on things. He’s had a blast at her party. As someone who personally falls more on the side of a “real adult,” I could sympathize with this so much. The only thing that doesn’t make sense here is when Sophie is surprised he is even familiar with Christina Aguilera’s “Dirrty” video. Drew and Sophie are close to the same age. That was a pretty major piece of popular culture in the early 2000s. Of course he’s going to at least be familiar with the song. However, Drew and Sophie singing “Dirrty” and laughing together was super cute. I know he’s probably not going to end up as the “father,” but he is my favorite romantic interest so far.

“We Are Definitely Somewhat Together”

Charlie is extremely excited for Sophie’s birthday as it will be the public debut of his relationship with Valentina. He’s hopeful she will let him refer to her as his “girlfriend.” However, Valentina is not ready to be completely exclusive. She thinks monogamy will take away their ability to be spontaneous. In this week’s nod to Valentina’s wild past, we learn that she once hooked up with Jeff Goldblum and his “hot yoga wife.” The writers are doing the best with giving us just enough backstory about Valentina to intrigue us, but not enough it seems unbelievable. 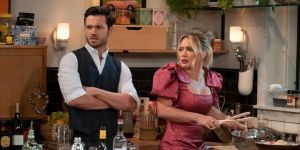 Charlie spends the party flirting with other women in front of Valentina. However, she quickly figures out she is way more turned on by watching him flirt with other women than she is flirting with guys for herself. She is possessive and jealous as hell, and Charlie is into it. Charlie works so much better for me this episode. They’ve turned down his energy by about five notches, and it finally feels like he’s operating on the same level as everyone else.

Charlie and Valentina end up hooking up in the bathroom because apparently that’s more dangerous than her bedroom. She admits that she thought monogamy would mean she was old and boring, but she wants to be exclusive with Charlie. This couple has fully won me over with this episode. I never want them to break up now.

In the final subplot, we get a lot more background on Ellen and Jesse’s relationship. They are both excited for the first birthday party they’ve gone to together since Ellen’s fifth birthday party at Chuck E. Cheese. That’s where they found out their mother was sleeping with Chuck, quickly clarified as a guy from the neighborhood and not “Mr. Cheese.” Jesse is excited to try to hit on women with Ellen, thinking they can be “wing sibs.” However, it is abundantly clear they are not that close. It starts when Jesse forgets that Ellen changed her last name after their parents’ divorce. Then Jesse doesn’t know that Ellen is allergic to wine. Her breaking point is when he mistakenly says that Ellen owns a dairy farm, when it is actually a produce farm. 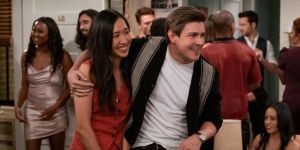 Everything comes to a head when Sophie sends them out for snacks to help the failing party. Jesse keeps pushing Ellen to talk to him. Finally, she says she always wanted a big brother like Matt in ‘7th Heaven.’ It’s a very era-appropriate choice, but wow, there are so many better TV big brothers. Jesse tells Ellen about the position he was put in after their parents’ divorce. He just didn’t want their dad to be all alone, so he stayed with him, but he asked about Ellen every day. It finally sinks in for her that Jesse was only nine when the divorce happened, so he was just a kid, too.

This scene between Chris Lowell and Tien Tran is my favorite of the entire episode. It alternates between jokes about ridiculous ‘7th Heaven’ plotlines, details about their backstories, and actual character development. So many scenes in the first couple episodes felt like the writers were writing to a specific punchline. This is one of the first times I felt like they were writing for real characters. As Jesse took Ellen to figure out the best way to swipe her MetroCard, I was truly rooting for them to repair their relationship.

There’s also a running joke about Sid’s “man-gagement ring” that he bought for himself. If you’ve seen the ‘Boy Meets World‘ episode where Cory gets an engagement ring for himself, you’ve seen this joke. Though Sid’s has dinosaur bone inlay, so it’s cooler than whatever Cory had. Find us on Twitter to share your ‘How I Met Your Father’ 1×04 thoughts. Be sure to check out our site for more content!