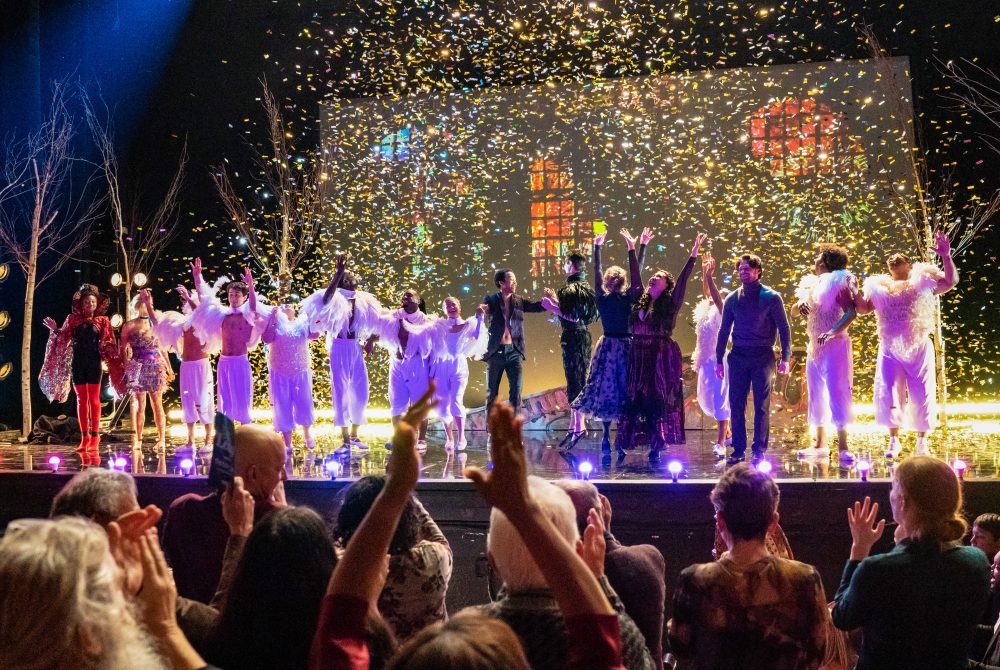 This week, ‘The Big Leap’ finale brought its freshman season to a close. I don’t know if I can say it was flawless, but it came pretty damn close. This is not necessarily going to be a traditional recap of the episode because there are so many things I want to say that go beyond the confines of this one episode. So, keep reading for my ‘The Big Leap‘ 1×11 review, in whatever form it takes.

There is something you should know about me: I love television. Every year, when the networks start announcing the new pilots they’re producing, it’s like Christmas. Some people have fantasy baseball. I have fantasy network television. From the moment I saw this show’s premise, I was all in. Show within a show format? Yes. Mix of comedy and drama? Absolutely. Opportunities for big musical numbers? Inject it into my veins now.

Then I saw it came from Liz Heldens, who wrote for ‘Friday Night Lights,’ one of my top four shows of all time. And then the casting announcements started. Scott Foley, who I have loved in everything since I binged the ‘Felicity‘ box sets in high school. Teri Polo, whose work on ‘The Fosters‘ and ‘The West Wing‘ was phenomenal. Mallory Jansen, who was a complete gem on ‘Galavant.’ Ser’Darius Blain, who I adored on my most recent hyperfixation ‘Charmed.’ And my anticipation soared.

Then the trailer dropped, and somehow, I got even more excited. It reached a level where if the show was anything less than amazing, I would have been devastated. Somehow, it exceeded all of my expectations. Even at the parts where I thought it was going to fall off the rails, they pulled it off. So, let’s delve a little deeper into all the ways this show just works.

“I Wanna Dance With Somebody”

At its heart, the dance show format has to work. If the show within a show is a mess, it all falls apart. Some shows pull this off really well (hey there, ‘30 Rock‘). Others not so much (how you doing, ‘Studio 60 on the Sunset Strip‘). The entire reason the dance show format works is because of Nick Blackburn. We have spent the entire season watching Nick think he is going to make a trashy, exploitative dance show. However, thanks largely to Wayne and Monica, he pulls it back into this inspiring ode to second chances. They get him to temper most of his urges to go trashy. Monica does it because she doesn’t want to humiliate herself as a dancer. Wayne does it because he genuinely sees the power for inspiration in what they’re doing. 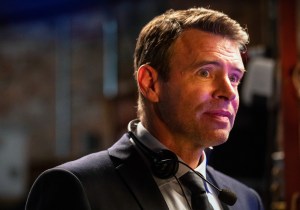 The confessional moments allow for some of the best laugh lines of the show. About 95 percent of those were delivered by Simon (Adam Kaplan). In this episode, when it cuts from Brittney saying she’s going to use “twin telepathy” to send a message that she and Justin are trapped to Simon saying “yeah, I didn’t get that,” I cried from laughing so hard. Every single episode had at least one moment like that.

The show was created with such precision. Every moment had a payoff, even the things that seemed like throwaway lines. For instance, Monica telling Nick her mantra of “Get up, you stupid little bitch” could have ended in that episode. But when Wayne starts reciting it to himself in the finale? Perfection.

The choreography and musical cues built all season long. The arm movements Gabby and Justin used in their high school dance showed up in the finale. Every significant Mike and Paula moment was underscored with some version of “Just Like Heaven” by The Cure. Same with The Smashing Pumpkins’ “Tonight Tonight” for Justin and Simon. There were the callbacks to “I Wanna Dance With Somebody” for the big group numbers. Everything showed such a beautiful attention to detail. There was so much communication between the writers, the choreographers, the music supervisors, and the editors. I marveled over how well crafted each episode was.

“You Could Come Along, Too”

I could write entire essays on the friendships in this show. In a lot of ways, I think the friendships were better than the romantic pairings. I’ve written a bit about how powerful I found the relationship between Mike and his friends. Since they were unfortunately not in this episode, let’s give some space to some other beautiful ones. Of course, there is the longstanding friendship between Gabby and Justin. I loved seeing them build their friendship back, so it was just as strong as when they were in high school. 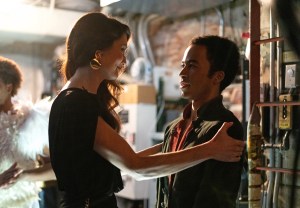 Wayne and Monica were a delight at every turn. There was such compassion and love between them. They were constantly challenging each other to be honest with others and themselves. In this episode, we saw Wayne challenge Monica to admit she was in love with Nick. It went from playful banter about how sleazy Nick is to Wayne pointing out how they soften each other. Wayne and Monica clearly have a deep love between them, and I am dying to delve more into their history.

There were plenty of friendships we didn’t get to delve far enough into. Everything about the dynamics of the House of Lush fascinates me. They could easily just be there for reaction shots, but I want to know about them. I want to know about Aja’s work as an electrician. I want to know how Travell got started teaching with the Pulver Center. Every detail we were given was a crumb for what is surely a magnificent feast.

The relationship that grew the most, though, was the one between Raven and Julia. I was so nervous about the dynamics of that at the beginning of the show. I worried they were going to go the route of the tragic sex worker who has to be saved. Instead, Julia found inspiration from Raven. She saw her as a businesswoman who was making her way in the world. Raven let herself be vulnerable with Julia. It was clear that it was hard for her. When Raven admitted disappointment over her mother not coming to the performance, Julia was instantly supportive. The two leaned on each other and celebrated how far they came together. Simply put, it was beautiful.

So much of this show is about love. The romantic pairings on this show are some of my all-time favorites. Naturally, there has been a lot of focus on Mike and Paula over the past few weeks. I will say that Mike dancing with the ballerinas from the Pulver Center and thanking them at the end completely broke me. There was so much ugly sobbing from my couch.

Reggie and Gabby took center stage again this week. I didn’t necessarily love the echo back to her falling from the pilot. Gabby could have been caught off guard enough just by seeing Reggie on the sidelines. However, I loved her for pointing out that his reappearance was inherently selfish. The grand gesture was more about him than what she needed. That being said, Reggie can deliver a romantic speech like none other. The audience reactions over whether Gabby should give him another shot were such a delightful meta commentary about the fan interactions with the show. Of course, I am Team Second Chance, so I was thrilled to see her agree to an afternoon coffee and kiss him offstage. 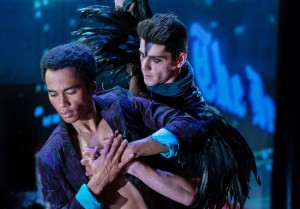 Justin and Simon have had such a great evolution in their relationship. Both of them could be caricatures, if not written and performed delicately. Truly, though, I believe that Adam Kaplan and Ray Cham were destined to play these parts. Their chemistry is undeniable. And when Justin delivered his big speech, I melted even more. I cannot emphasize enough how much I loved the moment when Justin introduced his dad to Simon. The way Simon just said “I’m a big fan of your son” was fantastic. At the heart of that relationship, Justin and Simon are fans of each other. They want to see the other succeed, and they want to be a part of that success.

Monica and Nick are the couple I am most rooting for, though, which is nothing I would have predicted. As Wayne pointed out, they do soften each other. Without Monica’s guidance, Nick would have cruelly manipulated every situation for a shameless ratings grab. He wouldn’t have let himself feel any shred of humanity. And without seeing the potential of humanity in Nick, Monica wouldn’t have opened herself up to mentoring the dancers. These two are the definition of a couple that elevates each other. The hot mic moment where Nick heard Monica degrading him was heartbreaking, but it also showed how tenuous Nick’s grasp on goodness is. His instinct is to shut down feelings and go for the sleaze. We’ve seen all season that he has the potential for good. He just has to find that.

The show even does failing relationships well. The final scene between Julia and Kevin was quietly heartbreaking. They were sitting in her dressing room. Debris was everywhere from the fight between Kevin and Linus. Amid the chaos, though, Julia and Kevin were able to find peace with each other and agree they needed to divorce. It had been suggested to Julia in the pilot that she needed a divorce to be more interesting to her Instagram followers. She really needed it, though, to start a new chapter in her life.

“I Need A Hook For Season Two”

The episode was riddled with jokes about what to do in season two. There were plenty of references to the show’s low ratings. However, there were also references to the highly engaged fan base. There is no denying the show is at risk of cancellation. And in some ways, you could see where it would be a one-season show. They churned through so much plot in these eleven episodes that it’s hard to imagine where they could go from here.

I go back to Liz Heldens’ involvement in ‘Friday Night Lights,’ though. That show was the best at wrapping up character arcs and introducing new characters you loved just as much as the originals. I can see where some characters have completed their arcs. There are other characters whose stories are just beginning. I am desperate to see those storylines. They even have me interested in the Brittney/Reggie baby storyline, and that is my absolute least favorite trope of all time. However, I want to see Brittney fight Nick’s influence to be the villain. I want to see her find peace with herself.

If the show is canceled after this season, it will go in the pantheon of great shows canceled before their time. For me, it will stand alongside ‘Pitch‘ and ‘Enlisted,’ coincidentally both from Fox, so let’s work on that. It will join ‘Whiskey Cavalier‘ in terms of Scott Foley performances I wanted more of. Or, we could rewrite expectations and give the show a second chance to win over more people. This show has been like capturing lightning in a bottle. The cast, the writers, and everyone involved has been amazing.

If you have somehow made it to the end of this diatribe without watching any of the episodes, go to Hulu now. You are in for an utter delight. Find us on Twitter if you want a watch buddy. We’ll bring the wine and the Kleenex. In the meantime, check out our site for more content, which hopefully will continue to include coverage of this sweet show.