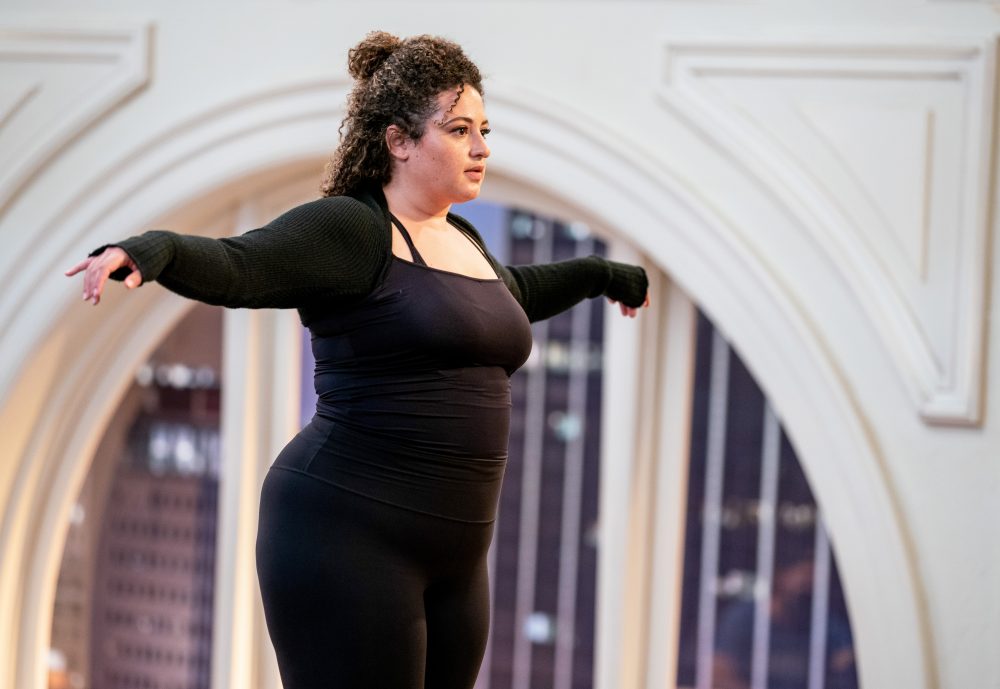 The penultimate episode of ‘The Big Leap’ starts to bring the growth of all these characters full-circle. As the finale of the dance show quickly approaches, I can’t help but be reminded of where these characters started. When I think back to the pilot episode, I’m touched beyond belief to see how far they have come. And as with every episode, I spent a fair bit of it crying. Keep reading for my ‘The Big Leap‘ 1×10 review.

“This Is The First Day Of My Life”

When we last left happy newlyweds Mike and Paula, they were sharing a dance in their living room as Mike lamented that he wished he could stop time. We all wished that as this episode begins with a beautiful montage of the couple settling into their married life. They decorated for the holidays. Friends came over for dinner and movies. Then Paula steadily got sicker until she had an embolism and died. Knowing where the timeline was in the last episode, it would seem that Mike and Paula didn’t get more than a month of marriage before she passed. Her death was not overwrought. It was tragic, but it was also beautiful in its simplicity. As the paramedics took her out, the scene cut to Piper Perabo performing a stunning jazz number, and we knew that Paula was dancing for the last time.

A week later, Mike sits alone in his home, looking at his wedding photos. Understandably, he doesn’t want to perform in the show anymore. However, Wayne and Monica enlist the help of Joel, Anthony, and Ellison to essentially kidnap him. Paula knew that Mike wouldn’t want to dance without her, so she pre-taped a few videos for when he was doubting himself. Again, they’re simple and heartfelt. She knows exactly what he needs to hear. Most importantly, she knows when he would need to hear them. The “if you’re hearing this, it means I’m gone” style of message is one that has been done so often, it seems like it wouldn’t work anymore. However, every single message she left got to me. 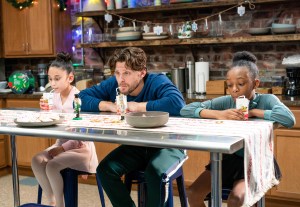 When the show began, Mike’s entire motivation was to get Paige back. He wanted to get this woman who did not seem to love or respect him. Then he found Paula, and she saw him as he was. And she loved him for that. So, instead of doing the show to win back a woman who didn’t want him, he did it to celebrate the woman who did. Mike is at his absolute lowest by the end of the episode, but he still has Paula’s love for him. She reminds him that he’s her “beautiful husband,” and he needs to keep living because it’s what she wants for him. He’s not okay, and he might not be for a while. But he was able to find true love, and that’s all anyone could wish for.

In the wake of Paula’s death, Nick reverts fully back into asshole producer mode. He buries his feelings down deep, choosing to focus on making the most exploitative show he can. Wayne and Monica want to know how they’re going to address Paula’s death, but Nick says they’re going to minimize it. Her death is sad, and people watch reality television to escape the sadness. So, they’re going to brush past her death and keep going. 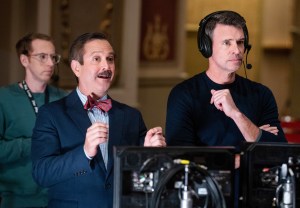 As the devil on Nick’s shoulder, network executive Zach wants to eliminate someone just before the finale. If the finale goes well, Zach will even let Nick produce the show based on the new IP he just secured, the Bible. I died laughing at the trainwreck that reality show could be. Wayne and Monica are upset that Nick still thinks they’re making an exploitative, cruel show, but Nick wants to detach all emotions and get through the finale.

However, when they get to the theater to rehearse, Nick sees the giant poster with Paula on it, and he has a panic attack. He runs to the bathroom, convinced he’s having a heart attack. Monica follows behind and calmly talks him through what is happening. She does throw in a “you stupid bitch,” as per his request. The evolution of their relationship has been so natural and delightful to watch. At the beginning, neither of them wanted to deal with any sort of feelings at all. Now, they’re not only talking to each other through emotional rough patches. They’re also emotional support for other people on the show.

When it comes time to announce the elimination, Nick refuses. He walks out of the theater, and every single person follows behind him. Finally, Nick acknowledges that the cast is made of people with thoughts and feelings, people who deserve to be respected. They’re not just pawns for him to manipulate in order to get the best stories. His entire career is riding on the finale being a success now. Fortunately, his daughter Henri is back to cheer him on and support him.

“Mommy Is In The Building”

Simon and Justin are struggling with their relationship in the wake of Justin’s job offer in Paris. Justin is certain they can handle the long-distance thing, but Simon isn’t. It is the worst time in the world for Mommy Lovewell to rear her delightfully insane head, but of course, she’s back for the finale. She approaches Brittney first with the idea that they go on a mother-daughter dating show called “Whore-lando.” It’s exactly as horrifying as you’re picturing. Mommy tells Brittney that Simon turned his back on them, and they need to protect each other.

Brittney knows better, though. Or at least, it seems like she’s trying to. Simon helps her practice setting boundaries with their mother. Brittney does get in Simon’s head about Justin, though, suggesting that he should dump Justin before he can be dumped.

Mommy finds Brittney the night before the finale, suggesting they go out for a late-night girls together. However, Brittney stands firm. She wants to be prepared for the show the next day. Also, “Whore-lando” would be a step back for her, and she doesn’t want to do it. Mommy shows exactly how toxic she is, threatening Brittney and saying she won’t be a part of her life anymore if she turns her down. Mommy leaves, and it’s heartbreaking, but it’s so important to see Brittney standing firm against her atrocious mother. This may get harder for her, though, because they are dropping some anvil-sized hints that Brittney is pregnant. 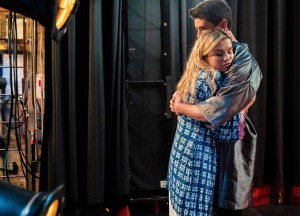 While Brittney stands firm in her boundaries, Simon lets his mother and sister get in his head about Justin. Justin keeps trying to assure Simon that they will be fine. They have a tender moment where they’re dancing together in Justin’s apartment. It’s so soft and intimate. I could have lived in that moment forever. However, Simon panics the next day, and he breaks up with Justin right before they are supposed to go on stage.

“Fight For Your Next Move”

As the show is winding to a close, Gabby goes back to her old job because she has a kid, and she needs health insurance. It is utterly devastating to see her taking such a huge step back, even though I completely understand the practicalities of her situation. Justin encourages Gabby to figure out what she wants to fight for, just like she fought for them to go on the show together.

Monica offers Gabby some inspiration for her next move. As everyone begins to complain about the plot of “Swan Lake,” Monica approaches Gabby to help her choreograph a new ending. With some nudging from both Justin and Monica, Gabby agrees as long as she gets credited as an assistant choreographer and compensated for her extra work. Her ideas are brilliant. She redoes the scene with the Prince’s suitors, incorporating every dancer’s preferred style. Monica gets her to come up with a new dance for Mike, one that will include the child ballerinas from the Pulver Center, in honor of Paula. Then Gabby comes up with a completely new ending to the show, one where Odette learns to love herself and lives. My Reggie/Gabby shipping heart is hesitant because I think Gabby is going to choose herself, but I cannot be mad at that character growth.

Meanwhile, Reggie is completely focused on football. He’s barely giving the show producers anything to work with, since he’s still understandably mad at them for showing Gabby the footage from the club. At a press conference, the journalists turn on Reggie, asking how he could play games with Gabby’s heart. It is hilarious that these sports journalists are all focused on this ballet show. The scene is straight out of a romantic comedy, but I adore it. Reggie decides he wants back on the dance show, so he can prove his love for Gabby. He just has to get back from Baltimore in time for the show.

“I Want To Put In The Work”

In the wake of his reappearance in the last episode, Kevin decides he wants to win Julia back. She has firmly moved on with Linus. He’s spending the night and everything. Kevin decides he needs to do things like put Christmas lights on the house to show his love for the family. Julia is rightfully annoyed with his presence. He just left her to parent their kids, and neither of the girls are doing great.

Olivia is acting out at school. Continuing to protest the school’s dress code, she paints a woman giving birth to an angel on the side of the school. It is absolutely hilarious. I love this little activist child. You fight the man, Olivia. Kevin finally does something right when he answers to his wife and children for his sins. He admits that he was having a midlife crisis, and he apologizes for letting them down. Then in a total reversal from the pilot, Kevin and the girls tell Julia to go to her rehearsal. Kevin even tells Julia he’s proud of her for reconnecting with something she loves. Their storyline has come so full-circle, and I love the growth for the entire family.

Everyone prepares for the final performance at the theater. Wayne gives them his requisite inspirational speech, telling them to be proud of themselves and their accomplishments. He dedicates the show to Paula, as I again tear up. Then just as they’re getting ready to go onstage, Alan shorts out a circuit and the power to the whole building goes out. Hilariously, Mike yells out, “I thought you wanted me to do the show,” seemingly talking to Paula. Nick goes into another panic attack, and the credits roll.

There is only one episode remaining this season, and they’ve set us up for some high drama. I truly cannot express enough how joyful this whole series has been. It’s a salve for my soul amidst all the despair of the world. Even this episode, which takes place in the wake of a great tragedy, is one that still manages to find the joy in life. How are you feeling after this episode? Find us on Twitter to share your ‘The Big Leap’ 1×10 thoughts. Be sure to check out our site for more content!