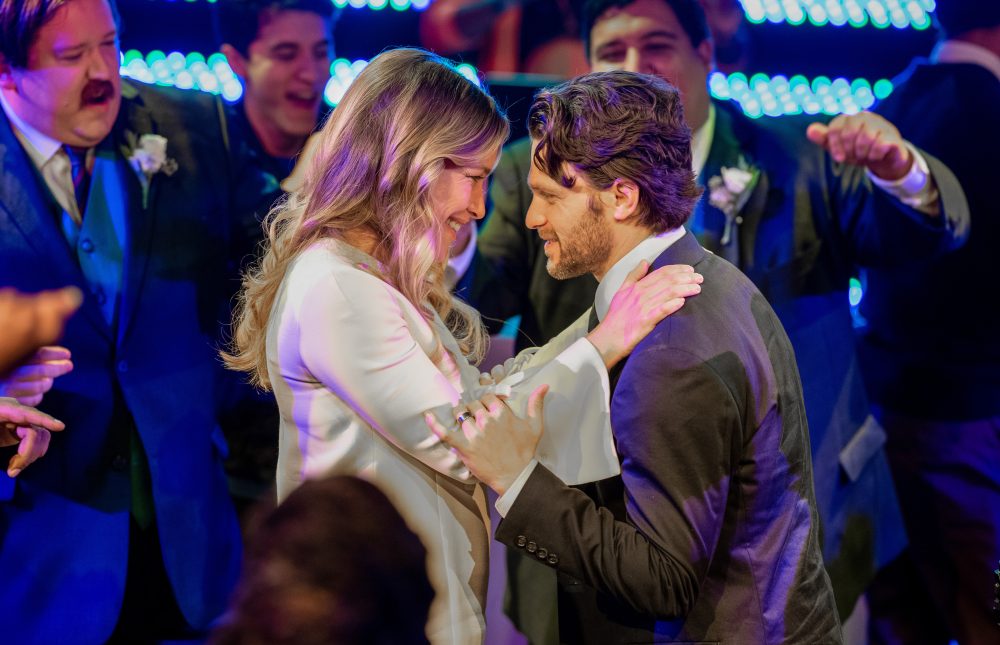 Mike and Paula take center stage in this week’s episode of “The Big Leap.” As the show rallies around the couple to make sure they get the wedding of their dreams, the audience goes on the emotional rollercoaster with them. Several other couples have some obstacles thrown their way, but nearly every scene this week is centered around Mike and Paula. Keep reading for our ‘The Big Leap’ 1×09 review!

“I Want To Feel All The Feels”

In the wake of Paula’s decision to stop cancer treatment, she goes on a quest to fulfill her bucket list. Some of the items are pretty straightforward, such as dancing more and running a marathon. Some are a little more questionable, such as vandalism. But the one that catches Mike’s attention is “marry someone I’m madly in love with.” He tells her she could do that. She promises to call his bluff and proposes to him in the middle of the produce aisle. It’s absolutely precious and is the only time I have ever been okay with a public proposal like that.

Mike and Paula go to Nick and ask to get married on the show the next day. They don’t want to plan anything, and Mike is still married. The wedding is the perfect distraction for everyone. As Paula puts it, everyone is looking at her like a “puppy abandoned at a truck stop.” But once they announce the engagement, everyone can focus on how excited they are for the wedding. It’s perfect because Paula really isn’t letting people in on just how sick she is. She admits to Nick that she’s getting weaker, so it’s possible she won’t even make it to the “Swan Lake” performance, but she can at least get married the next day.

When someone is terminally ill like that, they frequently end up managing other people’s emotions. Instead of talking about her illness, she can get her friends to focus on her spa-themed bachelorette party, planned by Miriam, Raven, and Brittney. Considering Miriam has never been to a spa or a bachelorette party, her involvement is a little questionable, but I’ll allow it.

The party goes off mostly without a hitch. Miriam even arranged for a stripper to come and entertain them. It’s not until Julia starts sobbing that the elephant in the room comes back. Given Julia’s history, it makes perfect sense she is the one most impacted. She knows what the other side of this looks like and how much it hurts. Paula takes it all in stride, though. She admits that things are weird, and it is a sad situation. They cry, and then Paula expertly gets them back in a celebratory mood when she asks her three bridesmaids (Julia, Gabby, and Monica) to wear really ugly dresses the next day. And let me tell you, those dresses are hideous.

Did Paula always dream of a spa-themed bachelorette party on a reality show? Maybe. Did she always want her bridesmaids in hideous dresses? I hope not. But most importantly, did she want to be able to celebrate a truly joyous moment without managing everyone’s sadness? Yeah, and that’s what she ends up getting. Since Paula’s cancer relapse, Piper Perabo has been playing her with this defeated peace. Paula seems both mentally and physically exhausted, but she also seems calm. It’s quietly devastating in the most beautiful way.

“We’ll Be There For You”

The episode opens with a flashback to the death of Mike’s dad. Mike wasn’t there. He was in the kitchen organizing the Tupperware. Even though his father was on his deathbed and was being read his last rites, Mike was certain he was going to pull through. Now, with Paula, there’s no hope she is going to pull through.

At his bachelor party, Mike gets overwhelmed when the ring seller mentions the lifetime guarantee on all his wares. He flees to the alley, and he is quickly followed by Joel, Anthony, and Ellison. The scene that follows is my favorite of the series. Mike’s friends all empathize with him over how much the situation sucks. They tell him he can’t run from the pain because Paula is going to die, no matter what he does. His choice is in how he faces the situation. Then while Mike sobs, they just reassure him that they will be there for him. 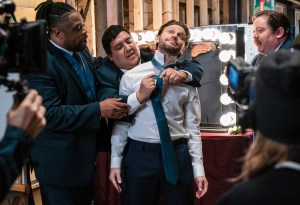 It is truly so rare to see male friendships portrayed in such a deeply empathetic manner. There are no jokes over the emotions Mike is feeling or how crying makes him a “girl.” No one tells him to “man up.” Instead, he is encouraged to face his feelings and accept them. He is given support and love in the moment when he needs it the most. To see these four, blue-collar men openly talking about their emotions in a way that is never played for laughs is so unheard of on most television shows. And it is so powerful and beautiful to see it done in such a simple way.

While Mike and Paula are preparing for their wedding, Nick takes on the challenge to make it the greatest wedding ever. It starts out that he’s just excited about the potential drama, jokingly referring to it as a “five-hanky crygasm.” After talking to Paula and realizing how imminent her death is, though, he throws himself into the wedding planning.

The first wrinkle is when Wayne refuses to officiate the wedding. Wayne believes he is cursed, since all seven weddings he officiated ended in divorce. Paula convinces Nick to be the officiant, which scares the hell out of him. He doesn’t want to be on camera, and he tries to get out of it. But in a great show of growth, he puts aside the need to manipulate a story, and instead, he just focuses on giving Mike and Paula the best wedding he can. 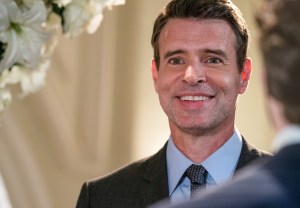 Nick gets around the two-day waiting period for a marriage license by letting county clerk data entry associate Mindy join the cast. When Paige has a meltdown and refuses to sign the divorce papers, he gives her the sweetest speech about divorce does not mean she failed. It’s one of those speeches he’s able to give that show his true humanity. It reminded me of the speech he gave to Justin when he was telling him what an amazing person he had become.

And then the wedding happens. It is truly beautiful. I watch the episodes multiple times to write these recaps, and I sobbed like a baby every time I watched this scene. From the celebratory beginning with everyone getting ready all the way through Nick’s officiant speech, it was just endless happy tears. Nick produces the hell out of the wedding. He engineers it to look like a sunset. He makes sure they have all the best camera angles. Nick does literally everything within his power to ensure their wedding is flawless.

It continues into the reception. Joel gives a touching best man speech about how much he loves Mike. Somehow, with only 24 hours notice, Gabby choreographed a full routine to “I Wanna Dance With Somebody,” which included people outside of the dance show. It is perfect and joyous, everything someone would want a wedding to be.

As Nick sits there and watches the celebration unfold, Scott Foley’s face falls. It’s clear that Nick thinks he failed. He found the one storyline he can’t control. Nick pulled all the strings he could, but at the end of the day, Paula is still going to die. He cannot fight nature, and it’s clear how much that utterly destroys him.

“I Believe In Us”

It is not entirely the Mike and Paula hour, though. Monica’s ex-girlfriend Annie comes into town for a meeting. Annie is a renowned Broadway director, and Monica convinced her to come audition Justin for her new show. It is nice to see the gentler side of Monica here because she is adorable with Annie. It’s all soft touches and giggles in a way she hasn’t allowed herself to be with Nick. With a little push from Wayne, Monica allows herself to open up to Nick and take him as her date to Mike and Paula’s wedding.

The audition causes tension between Justin and Simon, though. As supportive as Simon is of Justin, he is also deeply ambitious himself. Simon’s jealousy rears its ugly head. I am very grateful the show didn’t go too far down that route. Justin calls Simon out on his pettiness, and Simon apologizes for his actions. They make up, and things go well. Then Justin finds out he got the part, and he’ll be touring Europe for six months. Simon’s face isn’t quite as excited as Justin’s at that particular moment.

Linus and Julia continue to grow closer. However, when they go out for frozen yogurt, they run into Julia’s husband Kevin. He is back in town and working at the fro-yo shop. Julia rightfully reams him for not even reaching out to his daughters. She throws a bucket of rainbow sprinkles at him and storms out of the shop. Then Kevin shows up at the wedding, still dressed in his fro-yo shirt. He makes a scene and says he’s going to win Julia back. She looks as enthused by this as I am. No one asked for Kevin to come back. He could have stayed gone. 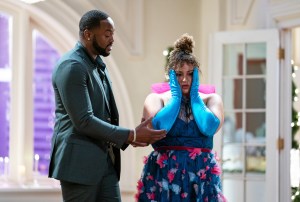 The couple determined to break my heart this week, though, is Reggie and Gabby. First, Gabby overhears Reggie talking about his herniated disc. Then at the wedding, producer Jessica shows Gabby the tape of Reggie kissing the other woman from last week. We can talk about how Jessica’s approach to handling interpersonal conflict is much colder than even Nick’s approach, but I feel like that’s going to be a much longer conversation. Regardless, Gabby breaks up with Reggie. With the glimpses we get this week of how much Sam adores Reggie, it breaks my heart even more. When Sam asks if Reggie is coming home with them that night and Gabby is clearly fighting back tears while saying no, I was a wreck.

The episode ends with Mike and Paula dancing in their living room as they enjoy their wedding night. They flirt back and forth, asking each other questions. Then Paula asks him what magic power he would want, and Mike just tells her he wants to stop time. It’s the cliched answer, but it’s the beautiful one.

With only two episodes left, I am trying to mentally prepare myself for Paula’s death. I don’t think any of us will be ready for it. How are you feeling after this week’s episode? Find us on Twitter to share your ‘The Big Leap’ 1×09 thoughts. Be sure to check out our site for more content! 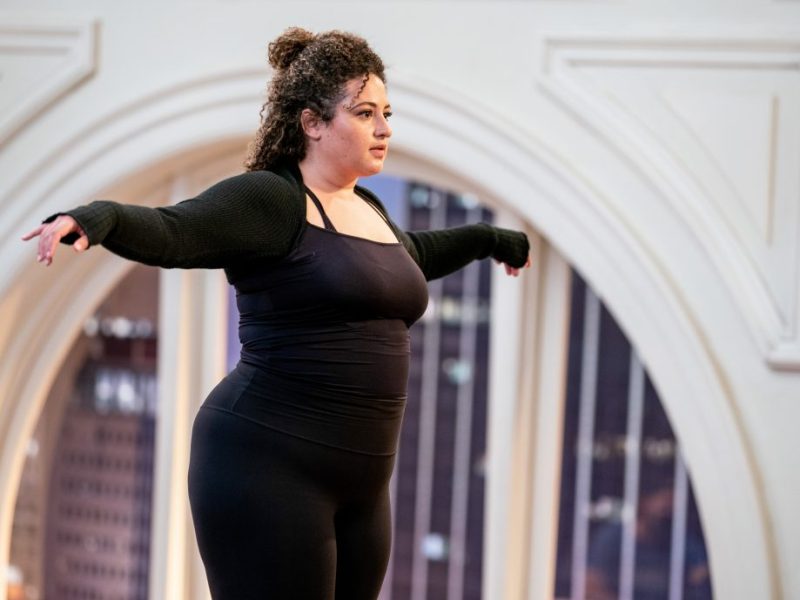