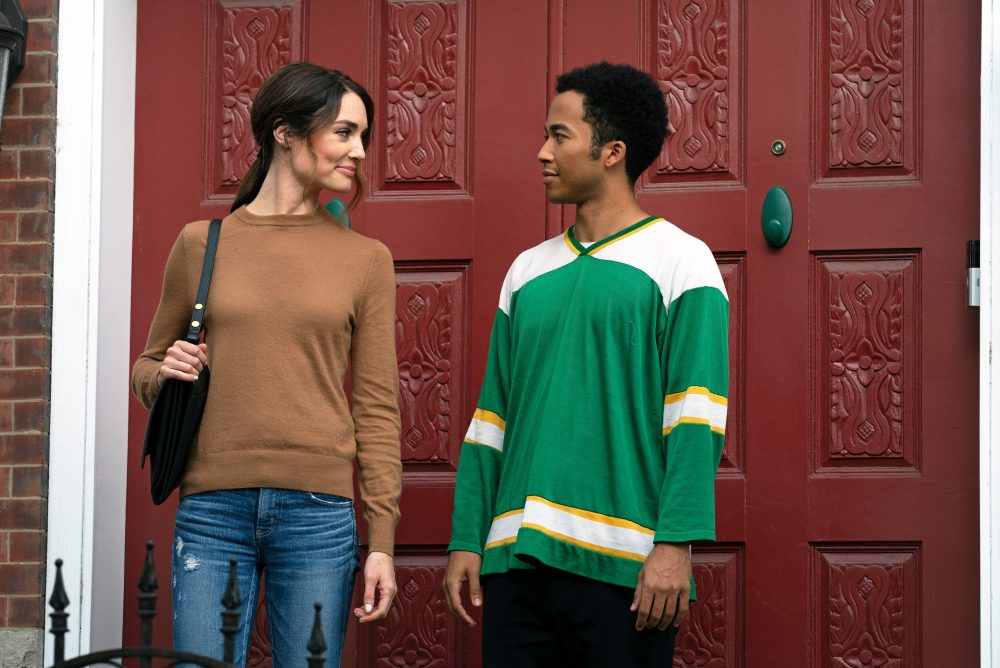 In this week’s ‘The Big Leap,’ Wayne hosts a lock-in to try to build morale. The show masterfully explores what it means to seek joy in a post-Covid world. And while the episode is mainly uplifting and joyous, one particular character appears not long for this world. Keep reading for my ‘The Big Leap’ 1×08 recap!

“Getting Bitch Slapped By Honesty”

In the wake of losing Justin (“our best dancer”) and Reggie (“so-so dancer, but biggest audience draw”), morale is a bit lacking for everyone. Wayne gets the brilliant idea to host a lock-in with some mandatory team building activities. Nick loves the idea of putting together people who hate each other in a pressure cooker. It would appear that Wayne is the only one super pumped about the morale building portion of the night. His games are rough, let’s be honest.

No one wants to be forced to do contact improv, except for Alan. He creepily watches from the booth and really wants to jump into the group. The House of Lush dancers, apparently named Travell, Adon, and Aja, are feuding since Aja got promoted to the Wizard role Reggie abandoned. Everyone is still mad at Brittney for exposing Gabby’s trauma. After their dance exercise, Wayne decides they should draw their feelings. Brittney takes that as an opportunity to get back into everyone’s good graces. She tells Wayne she wants to tell him her deepest fears in private. Instead, she locks him in a stairwell, freeing everyone from the feelings games. 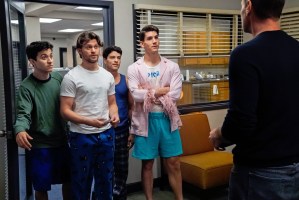 A group of the dancers go on a snack and alcohol run, leading to an utterly delightful impromptu dance routine in the gas station. However, when they come back, Wayne gets out of the stairwell and yells at them. He comes completely unglued. It is heartbreaking because no one wants to make Wayne mad. However, Kevin Daniels’ line delivery throughout this rant is priceless. When he says that Nick would be delighted if they pissed themselves, but he would be there with a clean pair of pants, I almost died laughing. Wayne storms off, taking his cot back to his office. Naturally, the dancers end up feeling bad, so they go to get Wayne. They end up sitting around talking about their internal “wizards” or fears.

The show walked a really fine line with this scene. The throughline of this section wasn’t necessarily personal traumas the characters needed to overcome. Several previously unnamed characters were revealed to have been deeply affected by Covid. One of them, Junior, became an EMT in February 2020, which said everything. In the gas station, Tamara talked about how she was an ICU nurse who wanted to change her life. The show has always been clear they’re in a post-Covid world, but instead of talking about the virus, it became about the collective trauma that society shared. Other characters share their non-Covid personal wizards, and it’s a great bonding moment for everyone that reveals a lot of different backstories. It ends with Brittney admitting she is her own wizard and offering a genuine apology to Gabby. I have many favorite scenes with this show, but this is near the top.

“A Regular Sam And Diane”

Sure enough, when Monica comes to Nick’s office later in some adorable silk pajamas, she wants to just have sex. Nick suggests they could go out on a date. When Monica looks visibly disgusted by the idea of dating him, he breaks things off. By the end of the episode, though, the two somewhat reconcile. They’re definitely friends, and maybe Monica could come around to something more than that down the road.

Linus, the super hot sound guy, comes back this week, and he seems determined to get Julia to go out with him. He brings her a gluten-free brownie because he just happened to remember her dietary preferences. He is adorable. I love him so much. Julia denies that he’s trying to flirt with her, but everyone is on the Linus/Julia ship. During the contact improv game, Julia admits that she fantasizes about Linus like everyone does. Raven reminds Julia that Linus is the sound guy and can hear everything she’s saying.

During the break in improv games, Julia finds Linus sitting by himself, and he admits that he’s been trying to get her attention. He jokes about how he has ten guitars, so he definitely didn’t need another one. They flirt back and forth until Julia ends up teaching him how to waltz. I kept yelling at my TV for them to kiss, but they didn’t. Linus asks her out for dinner, but she turns him down, temporarily crushing my dreams. 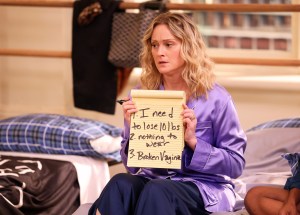 Back inside with everyone else, Julia tells Gabby, Paula, Aja, and Raven about Linus asking her out. They are as outraged as I am that she says no. She lists out her reasons for not accepting his advances, hilariously ending with “broken vagina.” In the line that made me laugh the hardest this week, Raven just says “She can’t get broken.” Gabby tells her to throw the list in the trash. Nearby, the conversation inspires Monica to give Nick a chance as well. Before the end of the episode, Julia accepts a date with Linus. My cheers could be heard from afar.

“A Positive Attitude’s Not Going To Beat This”

And now for the storyline that is going to utterly destroy me. Mike and Paula are fully in love with each other. Monica has them dancing this beautiful sequence as the embodiment of true love. Mike is planning a vacation to Cape Cod for when she’s through with chemotherapy. He tells Nick he’s going to treat Paula “like the princess she is.” Paula is suspiciously subdued about everything, though. I had a pit in my stomach every time the conversation turned to her cancer. Nick specifically asks her what her prognosis is, and she doesn’t quite answer the question. She tries to tell Nick that she’s strong and in love. She’s going to do chemo and fight this thing. 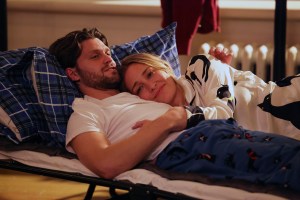 Sure enough, Paula wakes Nick up the next morning to talk. Her cancer is aggressive. It’s metastasized to her bones and liver, as well as formed lesions on her brain. With chemo, there’s a 5% chance she makes it past a year. She doesn’t know how to tell Mike that she is not going to seek treatment. This storyline could easily be over the top and melodramatic, but Piper Perabo expertly grounds it. She’s calm and obviously heartbroken, and it’s completely devastating. It’s clear that Paula is going to die because as big as “The Big Leap” goes with their storylines, they are all very grounded in reality. So, when Nick tells Monica what’s going on and she says it will be “unimaginably sad,” I know that’s the truth.

“You Were Reggie Sadler”

And now for our off-dance show storylines. Reggie is officially back on the Detroit Lions, so he has to give up his spot on the show. They throw him a big goodbye and he sweeps Gabby into a kiss in front of everyone. However, due to his contract, a camera crew will be following him for the duration of the season.

Reggie struggles with the transition back to the team, though. He gets tackled constantly, and no one wants to throw him the ball. He straight up whines to his coach at one point, but the coach just says he needs to prove to his teammates that he’s the same player he was before. Also, he’s battling a younger player named Owen for his spot.

Reggie goes out to a club with his teammates. Things seem to be going well. Then Marissa shows up. She clearly used to party with Reggie in the past, and Owen has his eye on her now. Outside the club, Marissa kisses Reggie. After a moment too long, in my opinion, he pushes her away. Unfortunately, the camera crew caught the kiss from across the street. Reggie tells Marissa he’s dating someone and it’s real. A car pulls in front of the camera crew, and it looks like Reggie leaves with Marissa. We’re able to see he clearly doesn’t, but the reality show footage will say differently. When Reggie picks Gabby up from the lock-in the next morning, he doesn’t tell her about the kiss, so that’s obviously going to explode next week.

“I Can’t Replace Him”

The show opens this week with a flashback to 2006 when a baby Justin was breakdancing on the street with some older guys. He was amazing, even from age 7 or so. He takes the money he earns from breakdancing and buys his mom an iPod. They dance in the kitchen to Mary J. Blige. It is beyond precious.

In present day, Justin struggles with his father. His brother lied to Earl and said that Justin needed the job because Earl is too proud to admit that he needs Justin’s help. Justin keeps trying to clean up Earl’s house, which he refers to as a “museum of clinical depression.” He has a point, though. Earl’s keeping Justin’s mother’s ashes in the freezer, which is disturbing on multiple levels. Earl Jr tries to tell Justin to chill out and just be there for their dad.

While on the phone with Simon, Earl falls and needs Justin’s help to get back up. He gets Earl over to bed and they end up finally talking about Justin’s mom. I am so glad this storyline wasn’t the stereotypical homophobic father who kicks out his gay son. Instead, it’s so much more nuanced. Both men are grieving and unable to talk about that grief. Earl mourns the wife who never loved him the way he loved her. Justin mourns the mother who understood him so easily. The way their relationship has unfolded is truly beautiful. And as the two men are laying there tearing up as they talk about Justin’s mom, I’m also a puddle of tears.

The next day, Monica shows up at Earl’s house with subs and beer. She butters him up even more by talking about the time she met Idris Elba before she transitions into talking about Justin. Monica is emphatic in her praise of his dancing. She tells Earl how much Justin inspires her. She told Justin he was replaceable, but he’s just not. Earl is clearly impressed that his son is so good. Justin is listening from the stairwell, and he comes in to say he can’t leave his father. However, the show came up with a workaround. For the duration of the season, the show is going to pay Mike’s trio of friends (Joel, Ellison, and Anthony) to work for Earl and keep his business afloat. Earl tells Justin he needs to go back to the show.

The episode ends with Justin doing a celebratory dance to “The Show Goes On,” and just like every time Ray Cham dances, I have actual chills. He imagines dancing with his mom, just like child Justin was at the beginning of the episode, and I continue to sob.

With only three episodes left this season, they’re setting us up for some major heartbreaks, as well as some great celebrations. How are you feeling after this week? Find us on Twitter to share your “The Big Leap” 1×08 thoughts. Check out our site for more content!