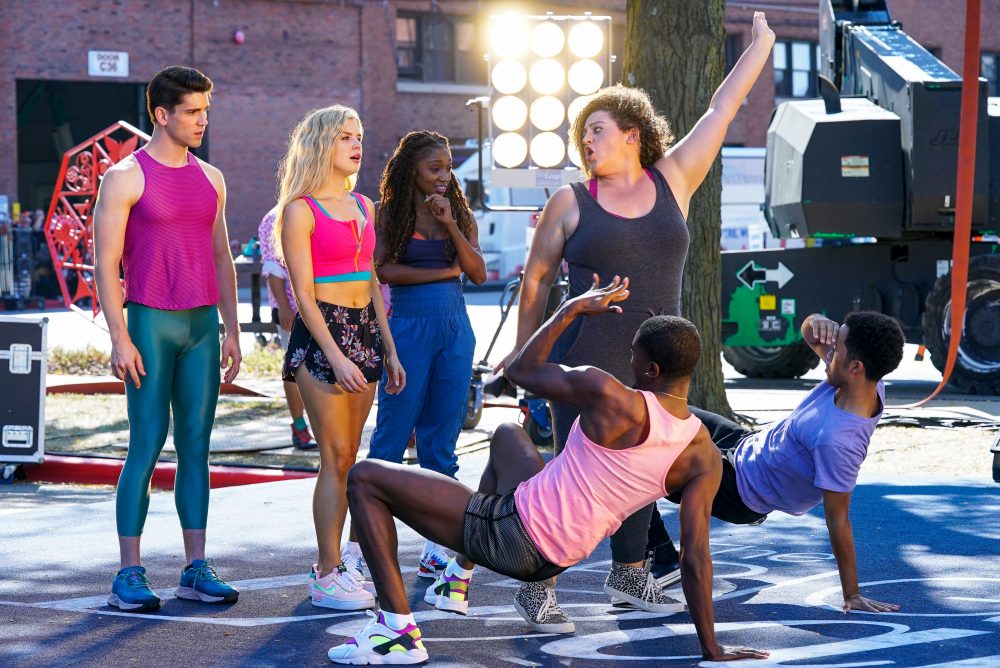 This week’s episode of ‘The Big Leap’ finds Gabby taking things into her own hands to get revenge on Brittney. Meanwhile, some relationships get more serious, and at least one dancer is on their way off the show. Keep reading for my ‘The Big Leap’ 1×07 recap!

“Not Today, Not Anymore, Not This Bitch.”

In the wake of the previous night’s betrayal by Brittney, Gabby comes back to the set with her knives fully out. Brittney realizes she messed up and offers some non-apology apologies about how they were both manipulated by people. Brittney is rightfully terrified of Gabby.

Gabby marches straight into Nick’s office. Nick is actually excited to see her. Partly because Gabby is clearly his favorite, partly because Dante and Alan are pitching a “square dance gauntlet” which sounds awful. She pitches a dance contest where the prize is the ability to challenge one of the principals for their role. She even has all the details worked out. Nick is utterly delighted by Revenge Gabby and tells her he loves “skullduggery,” which was a line that made me laugh out loud every time I heard it.

Nick comes up with a decoy prize, which is somehow a lifetime supply of shrimp. There are far too many questions he was not prepared for, but truly, the biggest snag in the plan is that Meter Maid Miriam is a shrimp aficionado. And considering she called ICE on Claude to get him deported during the car competition, we know she’s willing to resort to questionable tactics. Fortunately, her plans today are just to get a professional lighting guy and some pyrotechnics.

Brittney votes for Gabby, as Nick suggested to her. It didn’t take much convincing. Everyone on the show hates her. The dancers from House of Lush keep smacking cookies out of her hands when she tries to eat them. No one will let them sit with her. If she weren’t so awful, I’d be a little sad for her. Unfortunately, Justin and Simon vote for Miriam, so she wins the challenge ticket. Miriam is not happy the prize isn’t shrimp. Gabby ends up giving her car to Miriam in order to get the challenge ticket. 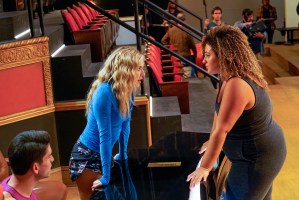 Gabby challenges Brittney for the role of the White Swan. Nick drops the final bomb that whoever loses the dance competition will be eliminated. Gabby selects Justin and one of the House of Lush members, while Brittney picks Simon and another Lush dancer. Sidenote: Can we please get names for the House of Lush? They proceed to have the most epic dance battle to Ludacris’ “Move Bitch.” It starts with Brittney whipping Gabby in the face with her hair. At some point, a rain machine starts and makes it even more dramatic. These huge dance numbers are such a great part of the show. I can watch them on repeat for days. Gabby delivers the final blow with a hair whip of her own to Brittney’s face. Both looked quite painful. Monica declares Gabby the winner.

“Our Lady Of Hallucinogenics”

Now, let’s talk about Monica for a bit because this is a great episode for some Mallory Jansen hilarity. Monica is struggling with the choreography for “Swan Lake.” She’s panicking that she can’t do it, and she’ll have to get her realtor’s license. She is correct that no one would buy a house from her. However, Jessica suggests she go see a shaman named Frank who works in transportation to help with her creative blockage. His solution is to give her magic mushrooms, so Monica is high off her ass for the rest of the episode. 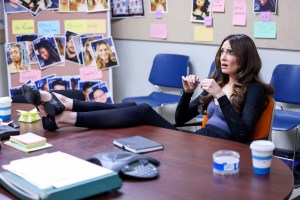 She ends up in the dark corner of what looks like a non-functioning elevator. Simon and Justin come across her while hunting for a spot to make out with each other. Monica asks Justin to stay, and she goes on the most adorable rant about how much she loves Justin. She calls him her protege and says he’s her favorite. She tells him how special his soul is. It may be a comedic moment, but it also means the world to Justin.

Prior to the start of the dance contest, Monica makes the announcement to the entire cast and crew that she is sleeping with Nick. There’s a variety of responses from “We already called it” (Dante and Ally) to “Don’t you two hate each other?” (one of the House of Lush).

Poor Wayne is so tired between the dance contest and his now high cohost. After the first round of the dance contest, Wayne quibbles with Nick over why their show suddenly needs an elimination element. Nick explains the revenge plot, and before Wayne can fight him too hard, Monica comes over to tell Wayne she had a long chat with Tchaikvosky. He told her not to let anything constrain her, even his music.

During the dance battle between Brittney and Gabby, Monica fully hallucinates the entire choreography for “Swan Lake.” It’s beautiful. It incorporates breakdancing and is completely different from a traditional production. She realizes the show is going to work, and she kisses Wayne in triumph. Kevin Daniels’ perfectly exasperated line reading of “Can you please just be present for me?” almost broke me when I heard it.

Now that we’ve dealt with the bulk of the dance show goingson, let’s delve into the relationships. The show opens with a flashback to Reggie’s childhood, where we learn all he’s ever wanted is to be a football player. He also bought his parents a house when he made it big. But the truly important scene is Reggie and Gabby together because that was the most sensual sex scene I’ve seen on broadcast TV in a while. These two are objectively hot together.

Reggie meets up with his old coach to talk about getting back on the team. The coach tells Reggie management used his drunken antics as an excuse. The real reason was that his performance was lacking. They go to run some drills, and the coach comments on how much better Reggie’s footwork is. Reggie praises the show for helping him get his head on straight.

Reggie is excited and goes to his doctor to get cleared. However, he has some broken vertebrae from a car accident that aren’t fully healed. The doctor doesn’t want to clear him to play again, and you have not been watching this show if you don’t think that’s going to pop up again. There’s no way Reggie makes it to the end of the season without a massive injury.

We get a cute moment at the end of the episode where Reggie gives Gabby a gorgeous necklace. He learned well from his father that he should spoil the people he loves, so Gabby gets a present for two reasons. The first is to celebrate her getting the role of the White Swan, and the second is to mark her first gift as an NFL player’s girlfriend. And look, please just let them be happy for a few episodes.

“You Do Not Know How Deep I Go”

Surprisingly, my favorite plotline this week was the Mike/Paula romance. For everyone who called it last week, Paula’s cancer is back. She avoids getting a biopsy to confirm the mass is cancer. She pushes Mike away, which devastates him. He even dances like a sad robot who has his heart ripped out of his chest. However, Paula doesn’t see it because she and Julia ditch the dance contest to go drink. 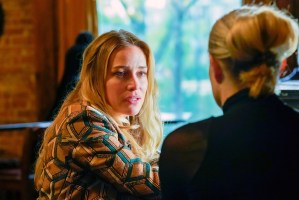 As we learned previously, Julia has been there for her friends through health crises before, so she jumps straight into caretaker mode. When Paula doesn’t want to tell her what’s going on, Julia even does a bar dance to “Say a Little Prayer” to get Paula to open up. I love the “Coyote Ugly” meets ballet vibe they were going for, and I love that they didn’t have Paula dancing on the bar. That would have been a little over-the-top with the “Coyote Ugly” connection. Paula wants to go Homecoming dress shopping with Julia and Sophia instead of going to the hospital.

Sophia starts by picking out a dress that leaves half of her body uncovered. I know there are teenage girls who are wearing those types of dresses to high school dances, and I’m horrified every time I see them. Sophia ends up picking a very adorable, age-appropriate red and black dress Paula picked out. Then Paula starts to break down a little bit because she doesn’t want to die. Julia and Sophia take Paula straight to the hospital. However, once Paula is back in surgery, Julia leaves to go get Mike because that’s who should be there for Paula when she wakes up.

He ends up running into the hospital with flowers and an obnoxious number of balloons while a slowed-down version of The Cure’s “Just Like Heaven” plays in the background. That was also the song Mike danced to after he slept with Paula the first time, so I will forever associate them with this song. He goes into a whole elaborate speech about how he loves her, and he’s more scared of her going through this alone than he is of her rejecting him. It’s precious. I cried. Jon Rudnitsky is the romantic hero I never knew I needed. He climbs into bed and holds Paula, and I dissolve into tears.

Reggie and Gabby were not the only couple to hook up at the end of last week. Justin and Simon also officially got together. The two are adorable. They discuss having a code because Justin doesn’t want their romance to be a part of the show. They spend the day flirting together while Justin keeps ignoring calls from his brother.

Unfortunately, at the end of the episode, Justin’s brother shows up. Their dad broke his foot. That means Justin has to leave the show to go care for his dad and make sure the family business stays afloat. He breaks the news to Monica, who has come down from her magic mushroom high, and she is back to her cruel self. Monica says she wasted her time on him and dismisses him. He is devastated by what she’s saying. It’s clear that he doesn’t want to leave the show. The thought of moving back in with his dad is weighing on him because he can’t even be flirty with Simon at the end.

The other twist is that with Justin leaving, Brittney gets to keep her principal role. Gabby throws an absolute fit when she finds out, and I completely understand. What Brittney did was horrid. She revealed Gabby’s personal trauma and brought Sam into it. It’s beyond understandable that Gabby wants to go for the jugular. But Nick is also right that he’s not Gabby’s friend. She’s on a reality show. Nick has shown time and again he will put the show above everything else. It’s a harsh reality, but he put it best when he said “I’m just a guy trying to get a second season.”

How are you feeling after this week’s episode? Find us on Twitter to share your ‘The Big Leap’ 1×07 thoughts. Be sure to check out our site for more content!