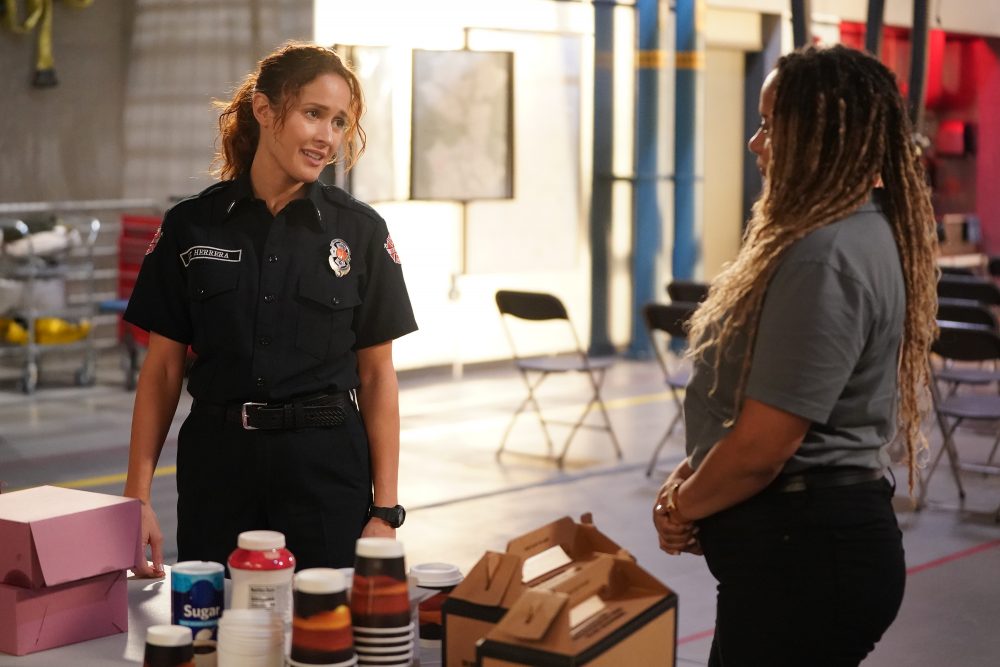 This week’s ‘Station 19’ continues to expand the Crisis One program. Station 23 joins 19 for crisis intervention training with the always delightful Diane. Then Jack gets to try his hand in the field. And everyone gets wrapped up in their respective relationship dramas. Keep reading for my ‘Station 19’ 5×04 recap!

For increasingly ludicrous reasons, we are expected to still believe that Robert’s “Fire Zaddy” viral video got the fire department to approve department-wide crisis intervention training. This is a completely unbelievable plot point, and my eyes still roll out of my head when it’s brought up. However, it means that we get to spend the day doing roleplay crisis intervention training with Diane. I am a fan of anything that leads to more Tracie Thoms being on my screen.

The day starts off rough when Diane asks Andy and Robert to roleplay the marital dispute scenario for everyone. Somehow, Diane didn’t think to ask for the current state of relationships in the respective stations. It is painful for everyone. Robert fully leans into it, yelling at Andy for throwing away a year of marriage. Andy yells back for screwing his best friend. It’s like a car crash no one can look away from. Mercifully, Robert and Maya are called away, so Theo fills Robert’s place. Vic ends up as the practice first responder, and it ends with Vic and Theo flirting. 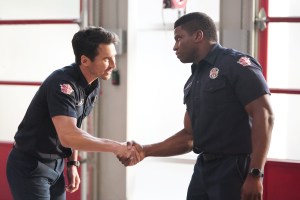 From there, Dean decides he’s going to make the groupings. He calls up Jack and Maddox to roleplay a scenario where Maddox is having a mental health crisis in the workplace. Dean rightfully grumbles that no one is taking it seriously. The scenario devolves into Maddox ripping open his shirt and screaming a la “Almost Famous.” Granted, that could be how an actual mental health crisis goes, but Diane suggests they take a break. She just has to remind Dean that he’s a leader, and she’s the teacher. She can teach them the language. He just has to remind them they already know how to handle most of these situations.

The next scenario is between Ben and the captain of 23. Ben completely knocks it out of the park. He’s basically doing a textbook definition of crisis management. Dean’s confidence gets a little higher when he sees someone can actually do this.

“You Want To Try It In The Field?”

Dean decides to give Jack another shot as the first responder on a real Crisis One call, so he joins Vic and Emmett while they respond. Myles, a young man with autism is refusing to get off the bus at the end of the route. He fell asleep and became agitated when the driver woke him up, and he cut his hand. The driver just wants to go home, so he called the police to get Myles off the bus. Jack ends up boarding the bus alone to talk to him. It doesn’t go great at first as Jack keeps trying to approach him and tend to his hand.

Jack keeps trying to defuse the situation by building rapport. He reverts to some sarcasm, which is not necessarily the best tool in this situation. It takes him far too long to clue into the fact that Myles is autistic. And finally, Jack makes a breakthrough with him. He convinces Myles to let him put the medical supplies next to him. Then Jack demonstrates how he can clean and bandage his hand. It’s a brilliant workaround because Myles was not going to let anyone touch him. Does it take longer than calling the police and having them haul Myles off against his will? Of course. Is it safer for everyone involved? Absolutely.

While Vic and Emmett have been keeping any crowd calm outside, Jack gets Myles to a point where he feels safe getting off the bus. They end up driving Myles to his friend’s house for dinner. It’s another fantastic call for Crisis One.

“That Hot Mess Of A Couple”

Robert and Maya get called to Tony and Patricia’s home, where husband Tony got stuck trying to sneak into the house through the doggy door. Patricia is his wife, who mainly just yells at him about what a useless drunk he is. It’s particularly disheartening because Nia Vardalos (of “My Big Fat Greek Wedding” fame) plays Patricia. She is much better than this role.

They bicker back and forth while Robert and Maya cut apart the door to remove him. Tony is clearly an alcoholic who hasn’t been able to get his act together. Patricia apparently wanted children, but she never told Tony she wanted them. And now, she’s holding it over his head that they’ll never have children. And because I’m apparently going to have to scream about it every week this season, talk about children before you marry someone. I really can’t emphasize enough how important that conversation is.

When they get Tony out of the door, he has a massive gash in his chest from a bottle opener. Once it seems like Tony might die, Patricia starts tearfully apologizing for being so cruel. Tony says he wouldn’t have cleaned up his act for a child, either. It’s basically a copy-paste scenario of any other fighting, married couple they’ve encountered in five seasons. 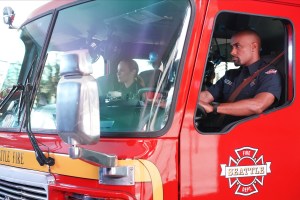 As they drive back to the station, both Robert and Maya are thinking about their marital problems because if you didn’t get the clear parallels to their respective situations, this must be your first episode. Maya finally tells Robert that even though she wants to stay out of Andy’s marriage, she’s watched Andy twist herself up over him for two years. Robert thinks that means she’s telling him to let Andy go, but she says she just wants her friend to be happy.

“You Went From Zero To 100 Overnight”

The Andy/Robert divorce drama is really the emotional meat of this week’s episode. During a lunch break, Jack tries to talk to Andy. He checks in to see how she’s doing, and I love how they’re really focusing on the Jack/Andy history. Jack loved Andy once, and she ran from him in a very similar way to what she’s doing to Robert. Of everyone, Jack is the best equipped to confront Andy. Because yes, what Robert did by going behind Andy’s back was wrong, but it was also wrong of her to completely cut him out for 10 months. Andy again wants to harp on how overbearing and condescending Robert can be. Jack reminds Andy that Robert is a lot like her father, and she worshipped him. However, Jack then compares Andy to her mother, and it doesn’t go over so well. 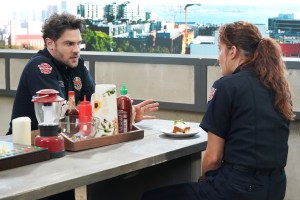 Following the Crisis One training, Diane finds Andy in front of her father’s memorial and checks in with her. Diane does what all great television therapists do, and she gets straight to the heart of the matter. Andy can’t stop thinking about Jack’s comparison to her parents. What irritates her the most is that she thinks he’s right, and he is. Andy is completely acting like her mother. She can’t understand why all she feels when she thinks about Robert is anger. Diane explains what “hysterical, historical” means. When Andy’s feeling these strong, hysterical feelings, it’s because something in her past is being triggered. She then suggests Andy might need to talk to someone about that. And yes, please, Andy, get some therapy. You’ve needed it since season three, if not before then.

Andy goes to search for Robert, but she finds Beckett. He asks if she wants to “hang out” again, but she completely shuts him down. She’s a little harsh, but Beckett sucks, so I was okay with it. She finds Robert, and he hands her the signed divorce papers. He doesn’t want to be the only one fighting for their marriage anymore. Instead, he wants them both to be happy. Honestly, it’s time Robert came to that conclusion because there was no indication Andy was going to change.

And now for the somewhat miscellaneous section concerning all the other subplots that didn’t fit into the above categories. First up is Travis’s dad, who is still very much in the closet. He’s going to San Diego with his secret boyfriend. He asks Travis to check on Nori while he’s gone. Also, Travis’s mom thinks he’s going to a conference, so Travis shouldn’t say anything. Travis does not want to keep lying to his mom, but he also doesn’t want to out his father. This continues to be a giant mess, and either solution sucks.

Vic finds out that Theo has had two previous girlfriends who ended up in psychiatric wards. He jokes that he has a type. It’s not a great joke. Later, Vic asks him some more questions about his exes. Theo tells her he spent his twenties thinking it was only love if it made him want to kill himself, but Vic is the first person he’s been with who gets him. They fit together. Vic talks about how all her previous exes were so serious, and she likes to make jokes and laugh. They are cute together, but I don’t see endgame for either of them. I’m still fully on Team Vic/Dean. And honestly, if Andy could get herself together mentally, I see a lot of chemistry between Theo and Andy. For right now, though, Theo and Vic can be cute in love together.

However, they could be a little less in love at work. Dean walks in on the two of them making out in the lounge. He’s already been struggling with the crisis intervention training. He thinks it could have gone better. Diane has to remind him that the training was a win. Dean keeps playing down his role in making it happen, but his program is a success. Ben then tells Dean he gave his friend Dean’s number because she’s looking to start a Crisis One-style program in Oakland, and she needs help getting it started. And yes, the program is going well so far. However, they’ve had two calls and have trained about a dozen people. The program is not sustainable yet, so the idea that it is anywhere near ready for Dean to move on to another city is completely ludicrous. I won’t even entertain the idea.

I’ll be honest. I’m really struggling with this season so far. Season four was so strong, and the show feels like it’s taken a big step backwards. The show is off for a couple of weeks and then comes back with a crossover with ‘Grey’s Anatomy.’ Based on the previews, there’s a strong chance someone is going to die. With the number of successes he’s had recently and the reminders about how far he’s come, I’ve got a bad feeling about Jack’s future. I could be worrying for nothing, though. Find us on Twitter to share your ‘Station 19’ 5×04 thoughts. Be sure to check out our site for more content!