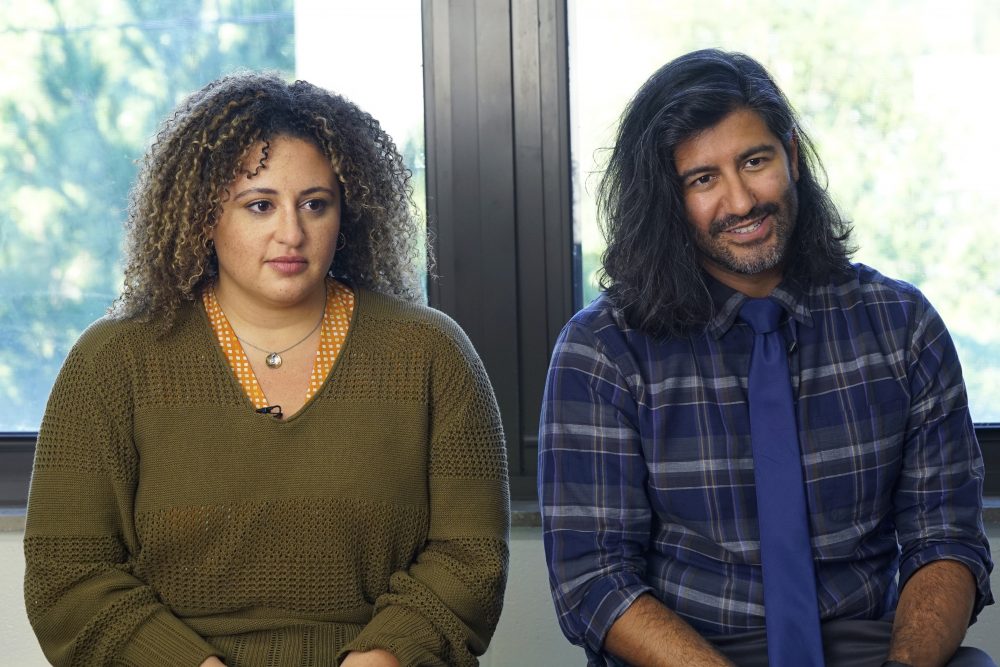 This week’s episode finds Gabby and Justin taking a trip down memory lane at high school, resulting in an extremely powerful moment for Gabby. More than one relationship comes to an end. Julia finally faces her feelings about her husband, and we get a delightful comic subplot that allows Adam Kaplan to shine. Keep reading for my ‘The Big Leap’ 1×05 review!

“It Was The Worst Day Of My Whole Life”

This week sees the fallout of Paula’s realization that she was the one who fired Mike. The episode flashes back to 2016 where Paula accepts an award for “Most Powerful Woman in Business.” She speaks about how inefficiency is a tumor. She’s heartless and cruel as “The Executioner,” so different from the warm person she has become today.

Instead of just calling Mike and telling him she needs to tell him something, Paula goes to Nick first and tells him that she wants to tell Mike off-camera before she tells him on-camera. Naturally, Nick is not about to let that ratings gold get away, so Paula sprints out of the room. She’s tossing chairs and filing cabinets in her path until producer Ally catches up to her and tackles her. For absolutely no reason, producer Alan then finds Mike and tackles him. It was a great bit of physical comedy from Tim Lyons as Alan.

Mike and Paula spend the rest of the episode kept in isolation away from each other until they can have their conversation on camera. Mike is excitedly talking with Alan about how well it’s going with the woman he’s dating. When he gets relocated to the high school, he makes an incredible watercolor of a murder hornet to give Paula.

Meanwhile, Paula keeps attempting to bribe her way out of Ally’s grip. She tries to bolt out of the room. She compliments Ally’s shoes, thinking that would help her. Nothing works, though. When they get to the high school, Paula manages to catch the eye of two dancers through the window. She does some insane mime movements, and they correctly interpret that she needs them to distract Ally with dance so she can sneak out. Ally’s reaction to the dancers made me laugh and rewind a couple times to fully appreciate it. There’s some great lines in there about how much Ally hates dancers. Paula finally finds Mike and starts blurting out how she’s the one who fired him. Mike’s face completely fell, and I needed to hug Jon Rudnitsky immediately. 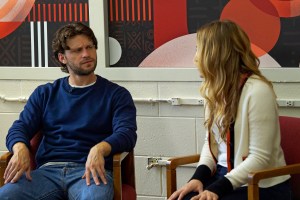 In the confessional with Nick, Paula tells her story again about her job in restructuring. Mike talks about how the day he got fired was the worst day of his life, and no one even checked in on him. He gets up and leaves, heading straight to the bar to meet up with his friends. They try to reassure him they never liked Paula anyway, just as she walks in.

The thing that made this scene even more interesting was that all of Mike’s friends were also laid off. Paula went through so much to desensitize herself to the people she was firing, and now she has to actually put faces with them. Joel tries to say it’s not really Paula’s fault. Anthony goes on the best rant about free markets and deregulation. I want to tattoo that rant on my body. Paula tearfully asks for another chance, and Mike says no. It is completely understandable, but it hurts so much. Mike has been beat down so many times, and I was really rooting for him to be able to have this one good thing again. Fortunately, the season is still young.

In the aftermath of Kevin leaving, Julia has started selling his stuff, mainly because he also took all the money with him. Julia is selling a guitar, which catches the interest of super hot sound guy Linus. Linus is played by Brett Tucker, who was also Ripley on ‘Station 19,’ so I’m fully on board with him being a series regular. Julia meets up with Linus later when she has the guitar. He’s playing it, and she starts dreaming about making out with him. I think we are all Julia in that moment. If Julia is going to get back on the saddle, let’s make it happen with Linus. I’ll start the petition. However, she decides she can’t sell the guitar and runs away. 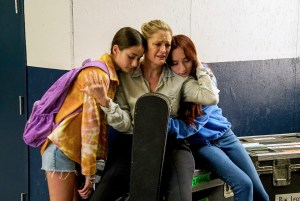 In a confessional with her daughters, Wayne asks how they feel about their mom’s dancing. Younger daughter Olivia is embarrassed. Sophia just wants to talk about how Julia is selling all of Kevin’s stuff, and she’s not even upset he’s gone. Julia tries to gloss over everything, and says she has to be the adult. By the end of the episode, Julia is crying with her daughters and admitting she does miss Kevin. Her daughters hug her, and I’m just glad someone did. Teri Polo does this thing where she just seems like she’s freezing and shutting down in emotional moments, and it’s so effective at portraying how trapped Julia seems. To see her break down with her daughters was such growth.

The rest of the crew goes on a surprise visit to Gabby and Justin’s old high school for a heartwarming background package. Gabby and Justin present a check to the school and start fumbling their way through an inspirational speech. Reggie comes out to take over, and he’s doing great until he uses it as a way to break up with Brittney. She loses it a little bit in a confessional scene, and a betrayed Brittney is going to be a scary one.

Reggie focuses on Gabby’s lack of reaction to the breakup. He ends up spending the day helping a kid named Evan stage this elaborate routine to ask Zoe Washington to Homecoming. Evan just wanted Reggie to ask her for him, but Simon steps in and helps him dream bigger. We’re talking streamer cannons, red carpets, and flash mobs. With the heaviness of the rest of the episode, this subplot was a breath of fresh air, mainly because Adam Kaplan is a comic delight. Simon immediately gets on the phone with his “dove guy,” who I fear for because he cannot deliver the doves. While Brittney is more outwardly vindictive, Simon is her twin and that trait seems genetic. 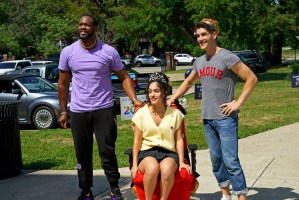 Despite Reggie momentarily psyching Evan out, it results in the most adorable flash mob to Carly Rae Jepsen’s “I Really Like You.” This scene and the hotel room dance from two weeks ago might become my go-tos for when I need a burst of serotonin. They’re utterly delightful. Naturally, Zoe says yes. Reggie decides to take the moment as inspiration. At the end of the episode, he drops a note at Gabby’s front door, but we’ll have to see what it says next week.

“The Truth Is, I’m Thriving”

Gabby’s distraction throughout the episode has nothing to do with Reggie and everything to do with the fact that Sam’s father is her high school English teacher, Mr. A. I’ll be honest. I thought they were about to make a major misstep with that reveal. Having dealt with salacious student/teacher storylines in Dawson’s Creek, Pretty Little Liars, and Riverdale among others, no show has fully grappled with the grooming, predatory nature inherent in that situation. However, The Big Leap proved me wrong.

Nick talks to an upset Gabby, who understandably throws something at his head and then storms out, quitting the show. Nick assembles all the producers to discuss how to handle the “plot.” It’s crass and disgusting, exactly how Nick handles drama. The producers are trying to figure out what America is going to think of Gabby now. Monica is the only one in that room worth anything, and she’s about to lose it on everyone. She brings up the fact this man still has access to vulnerable teenage girls. Most importantly, though, it should be Gabby’s decision.

Fortunately, Nick sends Justin to go check on Gabby at home. I cannot do justice to the gentleness of these scenes between Simone Recasner and Raymond Cham Jr. There is such a vulnerability in disclosing a trauma to someone you love, and it’s not something easily nailed. Gabby gives a near step-by-step guide to grooming. It’s hard and messy. It doesn’t get preachy, which would have been so easy. She lets loose all the negative self-talk she’s had for seven years, and she finally has someone to tell her that it wasn’t her fault. Justin does what any friend should do in that situation. He listens and he reminds her she’s enough. He is simply there to love her.

Justin convinces Gabby to go back to the school and watch the students perform the routine she choreographed. She has developed this moving, lyrical routine to “Youth” by Daughter. And while the Carly Rae Jepsen number makes me smile with joy, this routine sent chills down my spine and made me sob. Gabby pours her pain into this choreography. As Monica says, it’s exquisite. It’s the best expression of just how talented Gabby is at dance, and how much her teacher took from her.

Gabby ends up confronting Mr. A on camera as he eats lunch with his soon-to-be ex-coworkers. She gives a beautiful speech about survival and acceptance. She finally takes her power back, and it’s a huge moment for her. After she leaves, Nick tells him he can either quit or be fired. Then he knocks Mr. A’s leftovers into his lap. It’s incredibly satisfying. Less satisfying is when Nick has to tell Gabby that Legal decided not to air the footage of her confrontation for liability issues. He did get fired, though, which is a plus.

Gabby goes home and tells Sam the truth in the most child-friendly language possible. It’s another beautiful moment in an episode chock full of them. It’s impossible to imagine what it must be like to tell a seven-year-old his entry into the world wasn’t under the best of circumstances. Gabby makes sure to tell him she loves him and he can ask her anything. She also gives him a giant slice of chocolate cake.

This was truly the episode where I felt like I understood what this show is trying to be. Yes, it’s a comic look at how a reality show is made. There’s going to be great comedic moments sprinkled throughout every episode. But the show is at its absolute best when it focuses on the heart of these characters. It doesn’t have to manipulate us by tugging at our heartstrings. The emotion is genuine and earned. This is the episode that sent me from casual fan to proselytiser. I will sing this show’s praises every chance that I get now. Find us on Twitter to share your ‘The Big Leap’ 1×05 thoughts. Be sure to check out our site for more content!