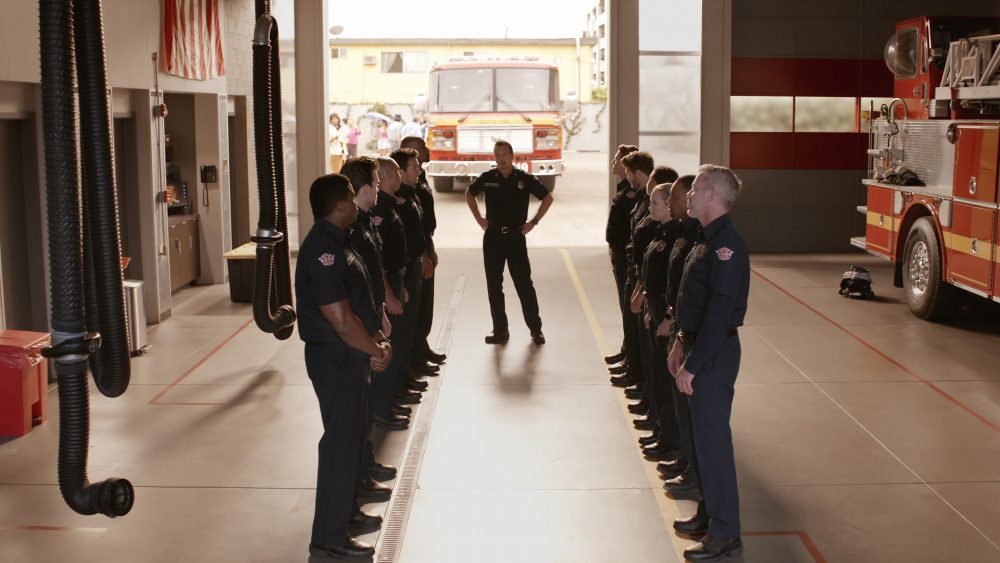 This week’s ‘Station 19‘ had everyone suffering through an insane heat wave. And maybe the heat made me cranky because I was not a fan of the majority of this episode. Keep reading for my ‘Station 19‘ 5×03 review!

“Hell Of A Day To Push A Truck”

The episode starts off with everyone gathering for a “push-in,” which is apparently a century-old tradition where the community comes together to push a new fire engine into the barn. However, they’ve left this entirely metal truck out in direct sunlight in at least 95-degree heat. Naturally, everyone burns their hands trying to push the truck inside. It is one of many things in this episode where the conceit for it to work requires everyone else having forgotten basic facts.

Community members all end up walking inside to hang out in the cool weather while they wait for the truck to cool down, or something. They don’t actually push the truck until the next day. I didn’t understand why people didn’t just turn around and go home. However, the station is also going to double as an emergency medical facility for the day due to the heat.

Away from Station 19, Andy is over at Station 23 dealing with the guilt over hooking up with Beckett. She wants to talk to Theo about it, but she also doesn’t want to actually tell him what she did, so there’s a lot of dancing around everything. He eventually figures out because Andy has no chill. She still focuses on how sleeping with Beckett lost her the upper hand in the breakup with Robert.

Andy apologizes to Robert for serving the divorce papers at work. He is still mad that they aren’t even going to have a fight or discussion after ten months of silence. This is where the time jump really hinders this storyline because it is stupid these two didn’t even seem to speak for ten months. These conversations should have happened not long after Maya and Carina’s wedding. Sure, Andy does everything she can to run from conflict, but this amount of time just feels silly.

The video of Robert shoving the phone out of the teenager’s hand has gone fully viral, and apparently Robert is now an Internet celebrity. It is apparently prominent enough that a public relations person for the fire department wants to use him to become the face of Seattle FD. First of all, Robert acts like it’s a shock that the fire department has a PR person. I don’t understand how he was promoted so far up the ladder with being so unaware of the political side of everything. 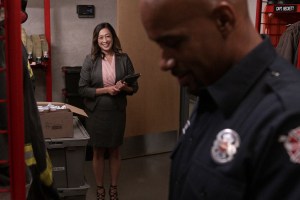 I’m sorry. I refuse to believe this video went viral to the point that it could erase the fact Robert got demoted for overdosing in the station. They want to put him out as the face of Seattle FD. People would easily figure out he used to be a battalion chief, and they would research to find out why he got demoted. The Internet starts asking questions, and now it’s an even bigger nightmare for the department. This storyline makes absolutely no sense.

“Is The Street Melting?”

Let’s get into the actual emergencies for this week. In the first one, Station 19 and Station 23 get dispatched to a massive car accident. It got so hot that the street completely buckled, which is a new thing I can add to my list of anxieties. We spend most of our time with a little boy named Max and his mother.

Max is just screaming from the backseat of the car, demanding to know what is happening. Everyone around Max has a lot more patience with him than I would have. I understand that this child was terrified and confused. When Dean took the time to calmly explain to him what had happened, it was a sweet moment. Then Max started screaming again when Dean left to do his job. That was where my patience would have run out. Maya jumps in and tries to explain what’s happening, but this kid just keeps yelling. 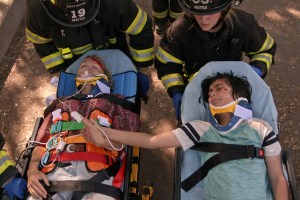 Eventually, the crew is able to get Max and his mom safely out of their car. Maya calms Max down by playing a game with him where they alternate saying words to a song. She is clearly impressed with herself for handling the situation with Max so well. Max and his mom leave for the hospital, and he finally stops yelling.

“I Want To Want What You Want”

Maya and Carina are still feuding over whether or not they’re going to have children. Carina is upset that Maya just ended the conversation. Again, a child isn’t something where they can really be a compromise. Either the person who doesn’t want the child gives in and parents a child they don’t want. Or the person who wants a child gives up. There isn’t a middle ground, which is why this is such a stupid plot device for married couples. It seems to be a favorite trope for the Shonda shows, and it irritates me every time.

While Maya deals with the road buckling, Carina tends to a teenager named Davey who came in with a heat stroke. His father/football coach had him running drills and he overheated. Carina totally loses it on this dad, which I completely understand. She was maybe a little bit out of line when she was biting at Robert for explaining the child’s symptoms to his father. She flatout tells the dad he tried to kill his son, which isn’t great.

They put Davey in an ice bath and give him oxygen. The dad comes over to Carina to promise it will never happen again. Carina goes off on him again, saying she’s calling Child Protective Services regardless, and then goes on to accuse him of emotionally abusing his child. She walks away and says that some people shouldn’t be allowed to be parents. Carina was absolutely right to say she would have to call CPS because she is a mandated reporter. However, she was making some pretty big leaps about the level of abuse.

Carina turns her ire to Robert later when he tries to make amends for his role in Maya’s demotion. She blames Robert not only for the demotion, but also for Maya not wanting to have kids. Robert rightfully says he will own his role in what happened, but he’s not taking responsibility for Maya’s actions. Maya and Carina talk a little more. Somehow, the interaction with Max made her more open to the idea of parenting. She tells Carina she wants to want what Carina wants, but she isn’t there yet. So, they kick the conversation down the road a little longer.

Ben brings Joey to work with him for a ride along in the aid car, so he has something for his college application essay. Beckett has to be a jerk to Joey so we can remember that Joey was once a homeless foster youth. Just in case we had forgotten, Jack also rehashes what happened the day they found Joey in the homeless encampment with his foster siblings. Jack also reminds us that he was a foster kid. There’s so much unnecessary exposition in setting up this storyline that it irritated me.

Jack, Ben, and Joey get called out to another homeless encampment to help a man named Ameen. Joey is apparently friends with Ameen and he spends the entire time flipping out at Ben, acting like he knows better than Ben does. As soon as they realized Joey was so close to Ameen, they should have sent him back to the aid car because he was out of control. Joey kept yelling that he knew Ameen wanted to die peacefully, but he didn’t have a medical card or papers to prove that, so Ben was making every effort to resuscitate him. 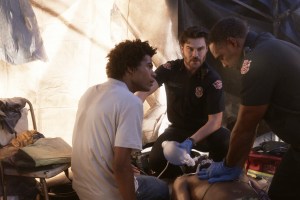 Finally, after Ben has made every effort, he calls for Grey-Sloan to allow him to pronounce Ameen dead. Joey exasperatedly says, “Thank you,” and Ben doesn’t lose it on him the way I might have. Joey tries to snark that Ben constantly breaks the rules, but Ben reminds him he does that to save lives. He had absolutely no evidence that Ameen was DNR, beyond Joey’s hysterical screaming.

Joey tells Ben and Jack about Ameen. He was a Sudanese refugee who resettled in Seattle when he was 17. Ameen taught himself English and had a ton of skills, but he ended up dying on the streets. It is an objectively tragic story that perfectly shows how much more needs to be done to help refugees who are resettling here. And while Ben absolutely does not know what it is like to be homeless, Joey also doesn’t understand the ethical responsibilities that Ben has as a first responder.

“I Want This Program To Succeed”

Crisis One is in the background of this episode, but Dean is still stressing out about it. Vic tries to suggest more in-person training, but Dean brushes off her idea. She then resorts to reminding him the program is going to succeed, but he brushes her off as just cheerleading. Then while the crew is out at the car accident, Beckett has to turn down a Crisis One request because Dean and Vic are occupied with the call, meaning the cops go out instead. By the end of the episode, Dean finally asks everyone else to help him make Crisis One better. He focused so much on the ways it could fail that he is ignoring how to help it succeed. Everyone assures Dean they want to help him change the world.

By the end of the episode, everyone is gathering back to attempt the push-in again. They turn on the hose like a sprinkler and everyone is cooling off in the water. Ben surprises Joey with a visit from his foster siblings. I will fully admit I burst into tears at that moment because reunited foster siblings pulls at all my heartstrings. The community pushes the engine into the barn and celebrates.

Even though this wasn’t my favorite episode, I have high hopes for next week, which looks to be a Crisis One-centric episode. Plus, Tracie Thoms is returning. How do you feel about this episode? Find us on Twitter to share your ‘Station 19’ 5×03 thoughts. Be sure to check our site for more content!