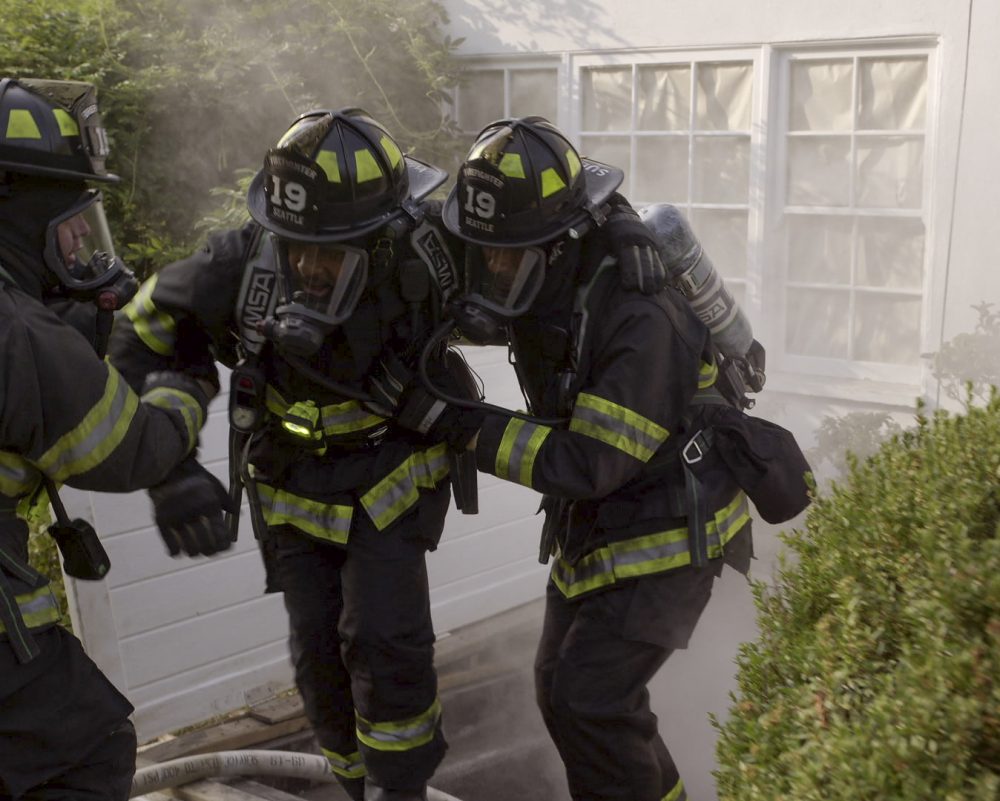 This week’s episode starts off with three couples enjoying some quality time together. By the end of the episode, one couple is officially kaput. One couple is nearing the rocks, and one extremely ill-advised couple hooks up. In the middle, a home lab explodes and Crisis One goes on their first call. Keep reading for my ‘Station 19’ 5×02 review!

“You Don’t Owe Her Sobriety”

Robert wisely seeks out his sponsor Richard in the aftermath of the divorce news last week. Unfortunately, he’s still thinking about things in all the wrong ways. He brings up how he got sober for her. He remains convinced that she only wants to divorce him because of his demotion. Richard again points out that his sobriety cannot be contingent on Andy, just like she doesn’t owe Robert their marriage because he is sober. Richard is making excellent points, but it seems like it’s all going unheard. 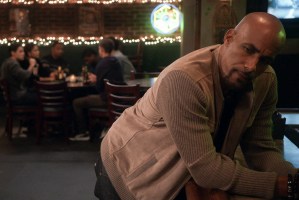 Personally, I can think of many other reasons the Surrera marriage is falling apart that have nothing to do with Robert’s addiction or demotion. He went behind Andy’s back on multiple occasions to make decisions about her career. There’s his involvement in Maya’s demotion. Robert isn’t really seeing any of that at that moment. Unfortunately, Robert gets served divorce papers at work, which adds insult to injury.

“We’re Not Trying To Hurt You”

The bulk of the episode focuses on two Emergencies of the Week. The first one coincides with the debut of Crisis One. Dean, Vic, and trained civilian co-responder Emmett get called for a welfare check. There have been 25 hangup calls to 911 in the past 72 hours from one apartment. Inside resides Ms. Debbie, an older woman with multiple sclerosis and her daughter, Alisha. Alisha is starting to exhibit signs of a pretty serious psychotic break. She locks herself and her mother in a room, threatening to jump out a window if the firefighters come in after her.

There is a lot of time spent debating and strategizing about how they are going to handle this call. They keep referring back to what they learned in training about deescalation. The thing about responding to crisis situations like this is no amount of training will ever prepare you. People are wildcards on a good day, and when mental health crises are brought into play, there’s no telling what can happen.

Dean wants to bust in and make sure everyone is safe, but that is only going to make Alisha more afraid. Vic spends a lot of time reassuring Alisha and validating her feelings. However, that’s not getting her in the door. It’s laying those blocks to build a trusting relationship with Alisha because in the real world, they would probably see Alisha and her mother frequently.

Ultimately, Emmett is the one who figures out their way into the room. Through all of her delusions and fear, Alisha will open the door if her mother needs something. So, when Emmett says that Ms. Debbie needs her medication, Alisha opens the door just enough for them to push their way in. Alisha screams and cries, still terrified. They’re able to sedate Alisha and evaluate her and Ms. Debbie.

It’s a hard, messy call. Emmett tells Ms. Debbie there are resources available for her and Alisha, even without insurance. I’m going to choose to believe that just as this season is an idealized post-Covid world, it’s also a world where those resources have openings and funding. That they don’t have waiting lists that last months and even years. Ms. Debbie thanks Emmett for treating them like human beings because that isn’t typically their experience. And for all the idealized handwaving about the care Alisha would be able to access, that last part is the one thing that could be true. It shouldn’t take a specialized initiative for people in crisis to be treated like humans.

Dean is clearly overwhelmed by everything that needs to be done. Vic reminds Dean, though, that they are changing the world. They got help for Alisha and Ms. Debbie, and they did it all without any violence. If it hadn’t been for them, that call could have been catastrophic.

“Is Your Face Tingling?”

The other emergency is a fire at a house that has been “under renovation” for several months. Travis, Jack, and Robert find some sort of makeshift drug lab in the basement. The smoke makes their face tingle as they approach, and aerosol cans are popping off in the basement. Jack and Travis drop pretty quickly. Maya and Ben vent the upstairs before going to help the others. Ultimately, Robert is the only one of them who stays conscious. He drags them out of the basement with some assistance from Station 23 when they arrive. 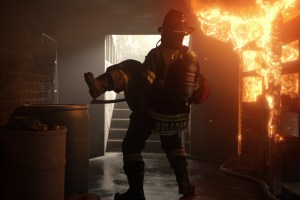 As the collapsed firefighters are starting to wake up outside, some annoying passersby start taking videos of them laying on the ground. Robert walks over and smacks the phone out of their hand, yelling at them about how they’re human beings. As we will later learn, this footage goes viral. Robert gets the nickname “Fire Zaddy,” which feels right.

Later, Jack tries to convince Maya to invite Robert to go day drinking with the crew tomorrow. Jack is far more magnanimous towards Robert than I would be at this moment. When Jack tried to sympathize with Robert over both having their hearts broken by Andy, he dismissed everything Jack and Andy had as “puppy love.” Jack wanted to marry Andy. Regardless, Jack tells Maya that Robert did get her out of the fire. She’s still not ready to be okay with him, and that’s fine. As far as I’m concerned, Robert has still not fully atoned for the way he wronged Maya.

“The System Is Built For Them, Not For Me”

Now, let’s address the Maya/Carina storyline, which is by far my least favorite. Carina is ready to talk about having a baby, but Maya still isn’t sure. Maya spends a lot of time talking to Ben about how he knew he was ready to be a dad. He admits he didn’t. He just fell in love with Bailey, who already had a kid. And then Bailey just brought Joey home, so he had a second kid. Maya says she’s heard all the arguments about why she should have kids, but she still doesn’t want them, which is a perfectly valid decision a woman can make for herself. And one that she has communicated to Carina.

Maya finally has a conversation with Carina and admits that she doesn’t think she wants children. She isn’t afraid. She just knows having children will kill her chance of promotion. Danielle Savre absolutely breaks my heart as she goes on about the double standard of moms vs. dads in firefighting. Carina walks away, upset. There are few common tropes that I just genuinely hate, but the “one wants kids and the other doesn’t” is chief among them. It’s fine when they’re just dating, but for it to cause issues after the wedding is just stupid.

Also, while I loved the conversation between Maya and Ben, it would have been way more interesting for her to talk to Dean about it. I’m sure Dean would have something to say about how being a single father has possibly impacted his career prospects. It feels like they sometimes forget Dean is a single dad, though. We did get a glimpse of the super adorable Pru at the beginning of the episode. She’s a whole little person now, but they just forget about her sometimes. For instance, when Dean is out drinking at 8:30 in the morning, who is with Pru?  I just have questions.

“They Feel Bad For You”

Over at Station 23, Andy continues to be a whole mess. The one good thing is that Theo genuinely appears to be her ally. Unfortunately, that means their coworkers are teasing them about sleeping together, because of course they are. One of her coworkers, Maddox doesn’t like how the firefighters are possibly going to be folded into Crisis One because the mental health calls and welfare checks should be the job of the police. I instantly know that I will dislike Maddox.

When the crew is leaving the scene of the fire, Maddox teases Andy about seeing Robert smack the phone of that kid’s hand. Andy sticks up for Robert and says he’s a better firefighter than Maddox would ever be, which is absolutely true. For all of Robert’s faults, he is an amazing firefighter. She goes on to bring up Maddox’s helmet and how “cooking” it to make it look more soot-covered can connect to cancer. She reminds him what happened to her father. When Maddox scoffs about Pruitt’s cancer, Andy nearly comes out of her seat at him. Jaina Lee Ortiz looked like daggers were going to come out of her eyes at him, and he looked rightfully terrified. 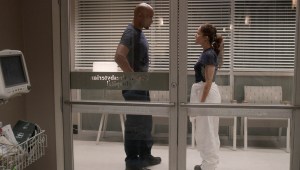 Combine that with her admitting to Theo that she hasn’t had sex in almost a year, and her actions at the end of the episode make sense. She goes to meet up with everyone at Joe’s for drinks. However, Robert is there, too. They’ve already had one awkward interaction in the hospital when she found out he got served with the divorce papers at work. She gets Jack to tell Robert to call his sponsor due to the drug exposure, but then she leaves. She runs into Beckett on the street, complaining about how Robert has gotten everything. Within a few words, Andy and Beckett are going home together and Andy’s dry spell is about to break.

Here’s the thing. It absolutely makes sense that Andy is going to sleep with Beckett. She has a thing for authority figures, and she’s self-destructive as hell right now. Andy has never dealt with her grief over losing her father, which is what led her to Robert because he was an authority figure. It’s why their marriage was never going to work until she addressed those issues. Andy needs to actually address the grief and trauma she’s experienced over the past two seasons. As hard as it’s going to be, I’m excited to see where this storyline goes.

How are you all feeling after this week’s episode? Find us on Twitter @capeandcastle to share your ‘Station 19’ 5×02 thoughts. Be sure to check our site for more content!