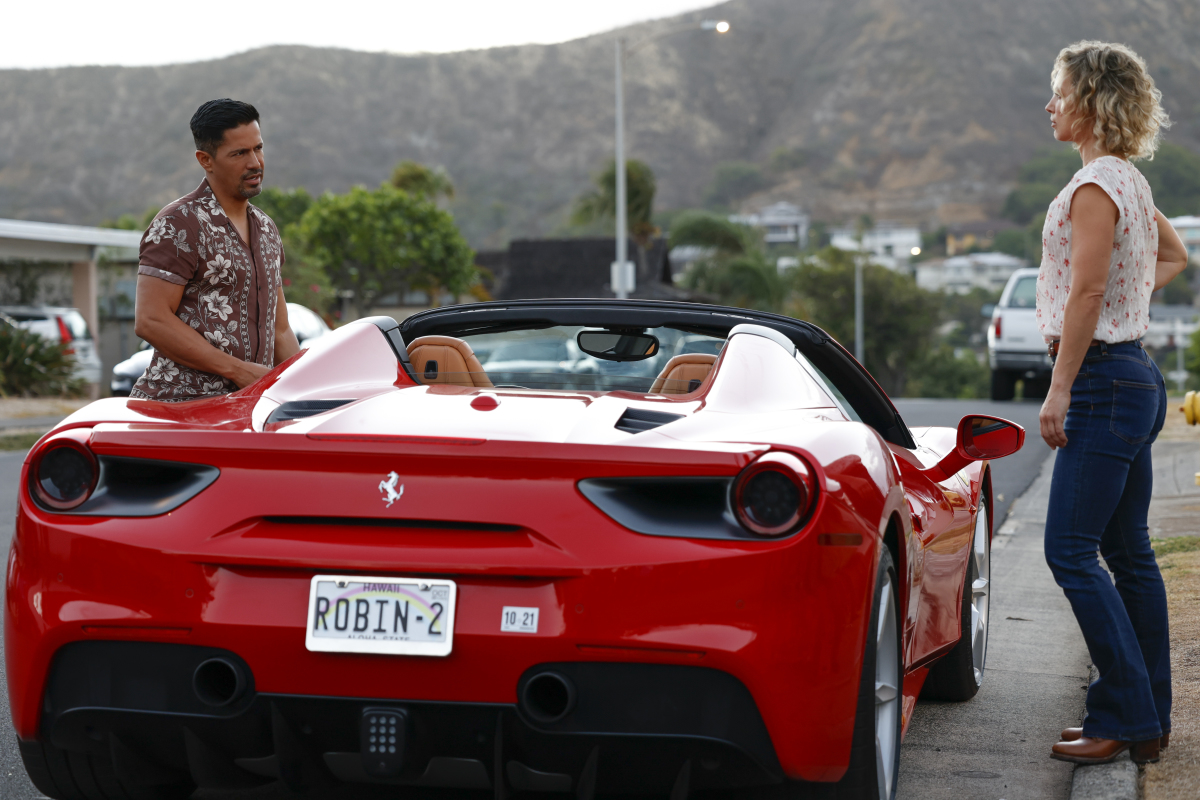 It was so exciting to have Higgins back in the same place as Magnum! And the two of them didn’t waste any time catching a case and kicking some ass! But they weren’t the only ones as TC and Shammy found themselves with a case of their own! And a pretty dangerous situation as well. Plus we had Higgins figuring out that Magnum was in a relationship after being home for only about five minutes. But I’m sure there are no feelings between them deeper than friendship. Riiiiiight. So keep reading for my Magnum PI 4×02 review!

Back But Not Normal

Juliet and Magnum were reunited at last and all I could think was about freaking time. I know they only really spent one episode apart. But it felt like forever. At least for me. And while it was great that it almost felt like Ethan wasn’t part of the picture anymore, I did still have to deal with Magnum and his new relationship. Don’t get me wrong, Kaleo seems great. But it’s been four seasons of waiting for Magnum and Higgins to get together and Ethan was enough of an obstacle. The last thing we need is another. Especially when there are so many obvious signs that Magnum and Juliet belong together. The way they notice things about the other that even their close friends don’t see? Come on, it can’t be more clear than that. 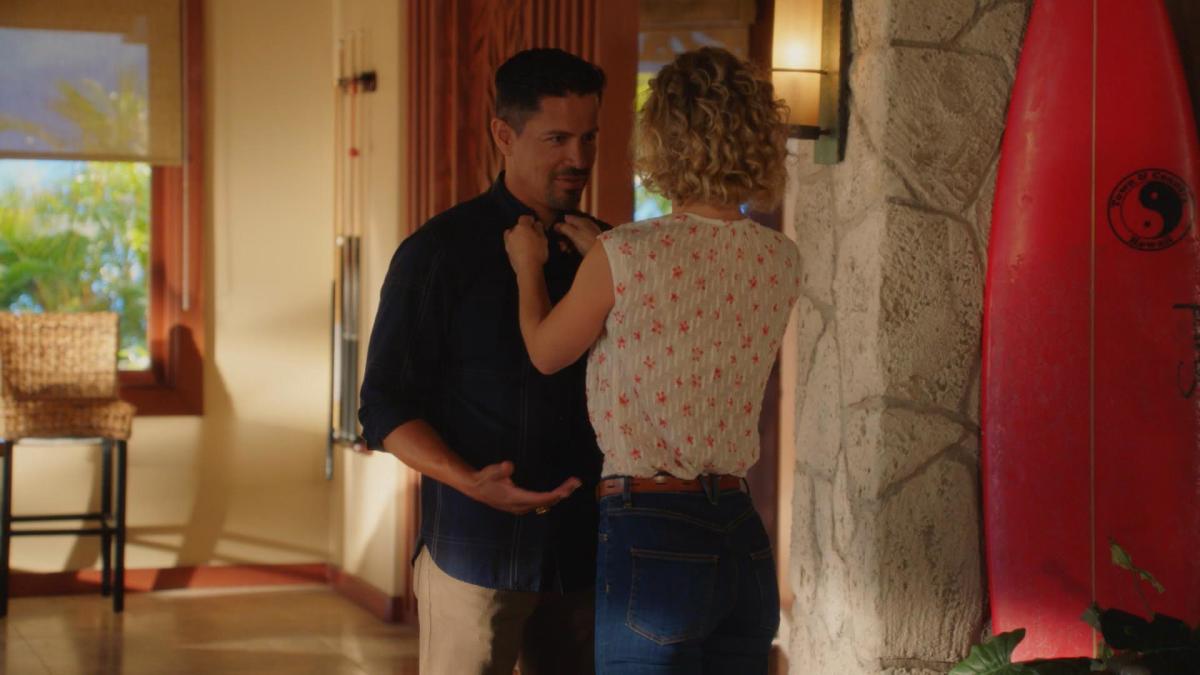 I really think the whole sneaking around thing is going to become an issue between the two. It really makes no sense that Magnum and Kaleo have to be discreet. Magnum is a PI and while he does often work in tandem with HPD on his cases, it’s usually only Gordon. The only reason Magnum works with Kaleo now is that they’re dating. So they really aren’t coworkers. And I fail to see where anyone would actually give a shit that Magnum and Kaleo were dating. Sorry, not sorry. Gordy might care but that would only be because of Magnum finding a way to be a constant pain in his ass and he would get over it pretty quickly.

There were a lot of questions that came with the case Magnum and Higgins took on. At first glance, it seemed like there was definitely something fishy about Makoa’s death. But then things took a turn and it seemed like Makoa wasn’t who his wife thought he was. He was actually a pretty bad dude. Not that I feel that means he deserved to be murdered. But it seemed like he had gotten himself involved in some pretty shady stuff and that stuff came back to bite him in the ass. I was fully prepared to believe that and figured Magnum and Juliet would still find the killer. But they actually found out more.

There was another twist in the end. Or a few. Alani was right about her husband all along. He was a good man who got caught in a bad situation. But he hadn’t actually done anything wrong. Unless getting in with a bad crowd counts as wrong. Makoa’s biggest wrong was trying to get himself away from the gang he got involved in when he was younger. And it seemed like he knew things were going to come to a head before he was killed and did his absolute best to make sure that Alani and their unborn baby would be safe. The truth about Makoa made it that much sweeter for me when Magnum and Higgins were able to turn Makoa’s boss over to the authorities.

I’m all for an episode with Shammy. He’s always cracking me up! But this time around I was more than a little nervous for him. I know he was with TC and that means I should know better than to worry. It just seemed like they had gotten themselves into a situation that wasn’t going to have a happy ending. And I was a little bit right. Because a completely happy ending definitely wouldn’t result in TC being shot! But at least he and Shammy were able to stay alive and take the bad guys down. This is why it sucks when the team goes in different directions. If Rick hadn’t been preoccupied with missing Suzy and the bar and Magnum and Higgins hadn’t been off solving a case, someone probably would have noticed TC and Shammy missing sooner. I’m just throwing that out there. 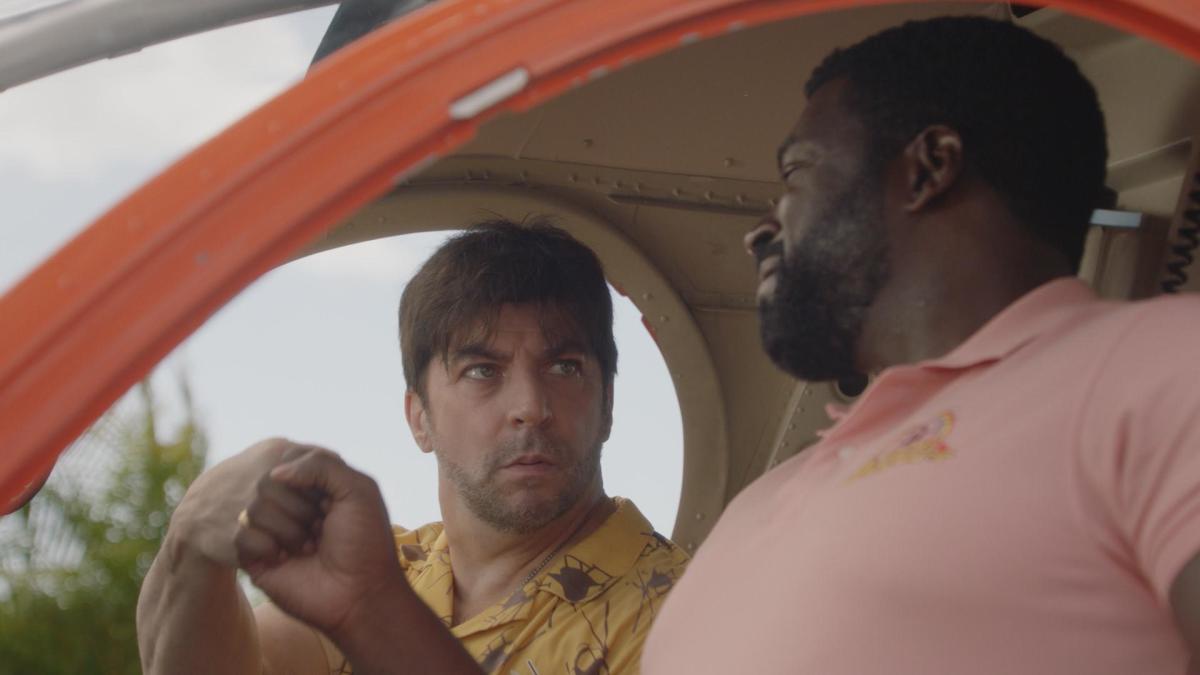 What did you think of Magnum PI 4×02? Do you think Magnum and Kaleo are going to last? Or do you think things will fizzle out now that Higgins is home? Were you worried for Shammy and TC? Or were you confident that the two of them would come out of things just fine? Did you find it odd that Juliet was able to notice pretty much right off that Magnum was in a relationship? Or does that just further proof that there is something more between the two of them than just friendship? Find and follow us on Twitter @capeandcastle to share all of your Magnum PI 4×02 thoughts with us! You can find me on Twitter @Sarah_Jeanne17! Also, be sure to check out our site for more content on all things Disney and beyond!