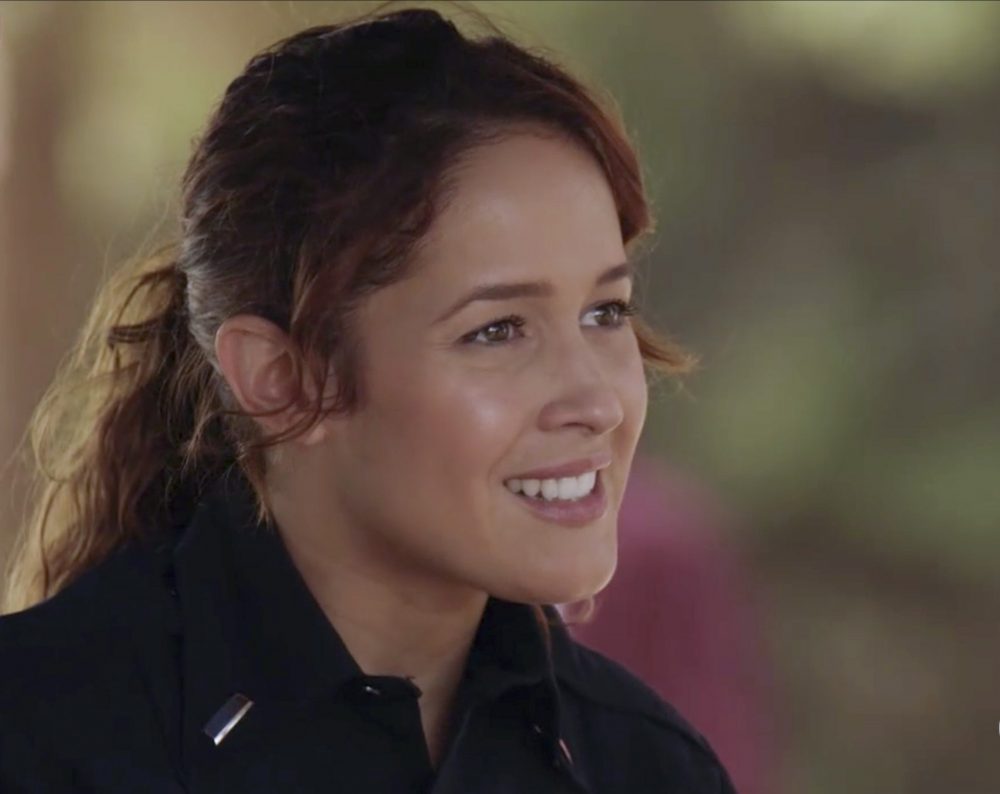 ‘Station 19’ Review: “Phoenix From The Flames”

This week’s “Station 19” premiere leads off with the disclaimer they will be depicting a post-Covid world. All the tension in my body left with the relieved sigh I let out. I am beyond ready to escape into their idealized future again. The premiere depicted a Seattle rising from the flames of the dumpster fire of last year, and it was a great return to form. There were multiple moments that made me burst out laughing. Not everyone comes out of the episode unscathed, though. Keep reading for my “Station 19” 5×01 review!

As mentioned, the theme of a phoenix rising from the ashes is prevalent throughout the episode. So much so that if you took a drink every time they mentioned a phoenix, you would be drunk halfway through. The current day storyline is set against the Seattle Phoenix Festival to celebrate post-Covid life.

Before we get into the present day, though, we have to flash back to 10 months ago. Somehow, Maya thinks it is a good idea for her, Andy, and Carina to march into her boss’s office, all clad in their wedding attire and demand her job back. Maya calls out the sexism that went into the decision. Andy invokes her father’s name and says he was written up for insubordination, but he was never relieved of his duties.

The more I watched this scene, the more I cringed. It comes off as completely immature. Was there probably a ton of sexism that went into the decision to strip Maya of her captain title? Without a doubt. Did marching into her boss’s office in her wedding dress and telling him that he doesn’t get to steal her joy do anything to help her case? Not even slightly. After Chief McAllister threatens to reassign everyone, Maya agrees to step down voluntarily. Andy still gets reassigned to Station 23, though.

Back in the current day, Captain Beckett is the new leader. He seems painfully boring. I get very strong Jock Dudebro vibes from him. The emergency of the week is twofold, but fairly straightforward. A guy dressed as a phoenix (drink!) blows half his face off with some illegal fireworks. He’s on shrooms, and he doesn’t realize he shouldn’t bend directly over the mortars.

His friend steals the rig, which is stupidly left unlocked and with keys in the ignition, thanks to Captain Beckett. He promptly hits another truck and turns the rig on its side. The team must transport Phoenix Man to Grey-Sloan on foot due to the traffic jam. They are helpfully led by Emmett on a bike, as he was there for the Undies Bike Race. Travis asks him to act as a siren. He starts by making literal siren noises before Travis reminds him he can use words. I had to replay that scene several times, partly because Emmett was very attractive in his bike shorts. Mostly, I was crying with laughter at his siren noises.

Back to the rig, which is leaking gas. A nearby fire juggler loses grip of his club, and it falls directly into the pool of gas, which lights up the rig. Everyone watches as the beautiful engine goes up in flames. Heartbreakingly, we watch the “In Loving Memory of Captain Pruitt Herrera” badge disintegrate in the flames. 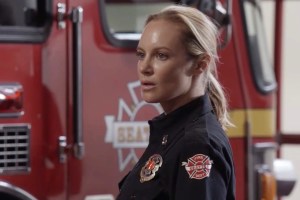 The crew goes back to the station, and Beckett starts off with a speech I was certain was going to be terrible. But he pulls it out in the end. He reminds them that while it sucks they lost their engine, there was no loss of life that day, and that’s something to celebrate. Sullivan follows up by apologizing to Maya for going to the chief in the first place. He thought he was helping, but he realizes now that he was hurting everyone. I am fully on board with Sullivan finally taking responsibility for his actions, so this is going to be a nice change of pace. Maya then seemingly accepts his apology, and things might be getting better there.

“The World Doesn’t Change Unless We Change It”

One of the other loose ends from last season was Dean’s lawsuit against the police department. He accepted the settlement and is using the money to fund a pilot program of non-violent first responders. He settled on Crisis One as its name. I love everything about this storyline, but I loved everything about it last season. Dean has had such a great character evolution, and this is utter perfection for him. There are a ton of great story opportunities for this. At one point, Ben wonders if Dean might be able to work in the Physician Response Team, and I sincerely hope that happens because I really miss the PRT.

Firmly tied into Dean’s storyline with Crisis One, though, is the ongoing Vic/Dean/Theo triangle. There’s a flashback to the night of the wedding where Jack finds Dean and urges him to tell Vic he loves her. Dean has decided he doesn’t love her enough to let her know about it, though. While Jack tries to tell him he’s a chicken, and makes some delightful chicken noises, Dean makes a good point that he doesn’t want to become someone that Vic has to manage. It’s heartbreaking, but I can completely understand where Dean is coming from at this moment. He feels sick and heartbroken, but he also feels relief she doesn’t feel the same way. It’s clear, though, that his feelings are still firmly there. 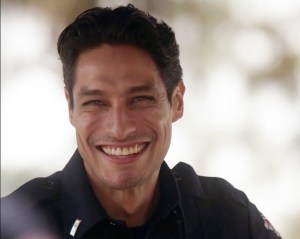 Unfortunately for Dean, Vic and Theo are super happy together. They’ve been together since the wedding. I am firmly on the Dean/Vic endgame team, but I’m also totally fine with Vic and Theo being a thing for a while. I mainly just want Vic to be smiley and happy. Barrett Doss and Carlos Miranda have a great chemistry with each other. I want to hate Theo, but I really can’t. I’m trying, and I’m very much failing at it. When Vic just casually tosses a “thank you, love you” over her shoulder at Theo, I melted a little bit. I won’t lie. He did, too.

Dean witnessed the “love you” moment from Vic, and he was clearly crushed. It is painfully obvious he regrets not telling Vic he loves her. Later, Dean comes up to Vic in the locker room. Delightfully for the viewers, Dean is just in a towel. He seems like he’s about to tell Vic he loves her. Instead, Dean just asks Vic to be a crisis response specialist for Crisis One because she’s so “warm and kind and very smart.” Vic hugs Dean and tells him she loves him and would love to be part of Crisis One. Jack watches this unfold and lets out a literal scream of frustration. He is every shipper at that moment. Grey Damon is the subtle MVP of this episode with his comic relief.

“I’m So Afraid I’m Signing Up For More Pain”

Travis and Emmett are also firmly in the happy couple camp now. We don’t get many moments from them in the present day. Outside of Emmett coming to surprise Travis with his participation in the Undies Bike Race, their one great moment comes in a flashback.

I almost didn’t include them as their own section, but the scene with Travis and Emmett in bed together was my favorite of the episode. I adore existential discussions after a couple has just had sex. They don’t happen frequently, but they are perfect when they do. Anyway, Travis is musing about how no one would sign up for the pain of life if they knew what was actually in store for them. Emmett says if he was told how beautiful Travis was in that light, he would sign up for it. It is so much more touching than my description can make it because Lachlan Buchanan and Jay Hayden have this effortless chemistry. If you watch nothing else, just watch this scene.

While everyone else is mostly okay, Sullivan and Andy definitely aren’t. I rewatched the first three seasons over the hiatus, and all the problems I’ve had with the Surrera relationship just became more apparent to me. Sullivan has always been overly paternalistic and acts like he knows what is best for Andy. Meanwhile, she jumped into a marriage with him to avoid dealing with her grief over losing her dad.

Back at the wedding, Andy tells Sullivan she doesn’t want anything to do with him anymore. Sullivan sulks in the corner before a drunken Ben tells Sullivan he needs to own his ruthless streak. Sullivan always tries to convince himself and everyone around him that he is doing the right thing for the right reasons, but he’s not. Everything he did by going to the chief was to serve his own career. It is well past time for Sullivan to admit that to himself. 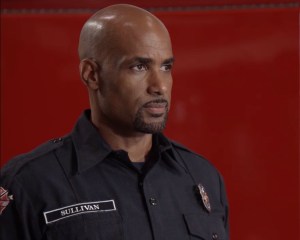 In the present day, Andy is struggling at Station 23, where she is the only woman. Sullivan has resorted to showing up at her work because she refuses to talk to him for close to a year now, which is super immature of her. She blames Sullivan for getting her reassigned from Station 19, which is blatantly wrong. Her own immaturity and constant invoking of Pruitt’s name is what got her reassigned. She needs to own up to her own role in this. However, she blames Sullivan for the fact she doesn’t love her job anymore. Sullivan tries to compare them to a phoenix (just drink for the whole scene) and Andy says they’re just ash. It’s honestly so ham-fisted, and I truly hated every moment of it.

The one good thing about this storyline is Andy and Theo are forming a friendship. The more I see of Theo, the more I like him. He has a really great friendly chemistry with Andy. Theo tries to convince her that she needs to do something about it if she’s that unhappy in her marriage. She tries to argue that she took vows, but he tells her she shouldn’t stay married to someone she hates. However, after watching her dad’s engine burn up, she admits that her marriage is the last thing she has left of her dad. If she lets go of that, then she has to finally let go of him.

The show ends with Andy finding Sullivan at the station. Andy admits she loves him, but she doesn’t respect him, and she can’t forgive him. She contacted a divorce lawyer, and it should be simple.

This is honestly the best thing to happen for both of them. Andy needs to deal with her own feelings about her father. She needs to stop looking for men that remind her of her father. Sullivan has never really treated her as an equal. He went around her back about work stuff so many times. Sullivan needs to deal with his ambitions and how that affects his relationships. Honestly, they should both look outside the department to date, but then we wouldn’t have a show. Once they both have some serious growth, maybe they could be a good pairing again in the future. Right now, though, they’re toxic.

Overall, this was a really strong episode to start off the season. I’m excited to see the Crisis One storylines. The Vic/Theo/Dean and Travis/Emmett relationships are huge draws for me. I’m excited to see Andy grow outside of the Surrera relationship. How are you feeling about the season? Find us on Twitter to share your ‘Station 19’ 5×01 thoughts. Be sure to check out our site for more content!