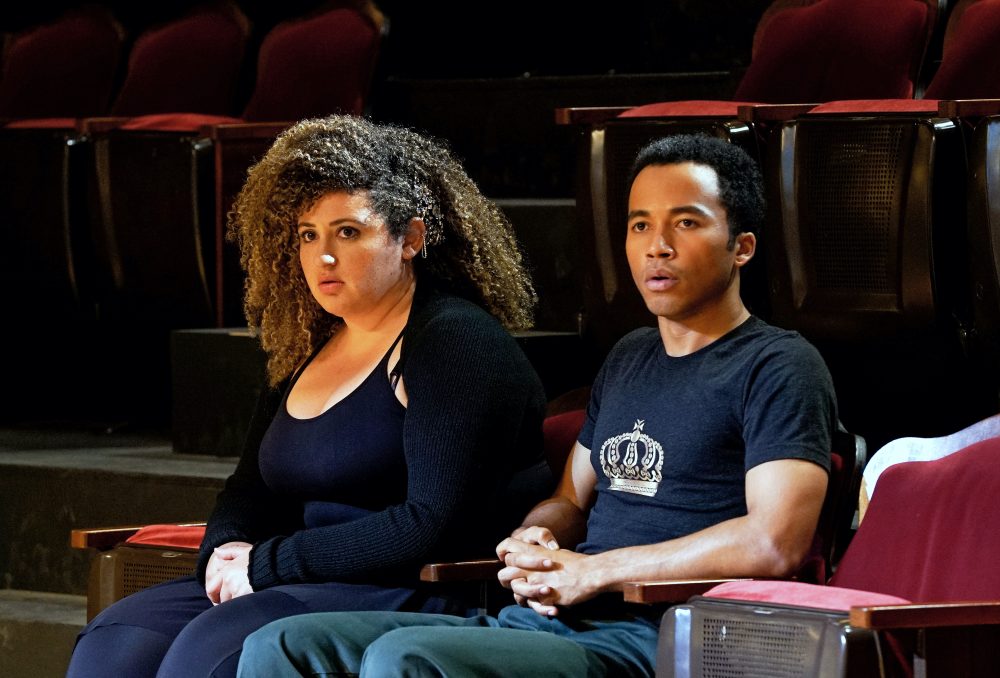 After last week’s utterly delightful premiere episode, I was hopeful this week would live up to the expectations. Fortunately, I mostly love this episode. The humor is spot on, and there are characters that I truly love. There are some storylines where I’m a little more skeptical. Keep reading for my ‘The Big Leap’ 1×02 review!

The exposition dump for this week is all about the auditions for the principal roles. Characters are split up into triads of The Prince, The White Swan, and The Black Swan. Throughout the episode, there’s some drama associated with the dancing, but most of it happens behind the scenes.

“Do My Choreography Or You’re Out”

The bulk of the dancing drama comes from Monica’s rage issues. Monica isn’t prickly. She’s downright abusive. While she clashes with many people this week, the worst comes from her confrontation with Justin. He struggles with the ballet aspect of the show, easily reverting back into his breakdancing technique. After Monica orders him to redo a pirouette, Justin responds by doing a very impressive headspin. His peers cheer for him. Monica throws a metal chair at his head.

I get the trope of the mean reality show judge. She’s the Simon Cowell or Gordon Ramsey stand-in. In a world more sensitive to abusive work environments, this falls in the category of elements I’m more cautious about. Yes, this is a reality show and not a workplace. However, I still don’t love it.

Simon, one of the twins from last week, gets more fleshed out this week. He is in a triad with Justin and Julia, and he helps Justin a fair bit with the choreography. I can’t tell if they’re setting up Simon to be a love interest for Justin or a friend. We know that Justin didn’t have much support when he came out. His dad kicked him out, and Gabby wasn’t speaking to him. Justin clearly needs someone. He has Gabby again, but he needs to widen his circle.

I don’t see romantic chemistry there yet, but Adam Kaplan and Raymond Cham Jr. have an interesting dynamic I want to see explored. Simon and Brittney alluded to some majorly abusive language from their mother growing up, so that’s something these two characters could bond over. I see a lot of potential here.

Nick gets an added layer of scumminess when we find out he’s being sued from his last show about a group of people living in an underwater house. They didn’t fully evacuate when an oil rig exploded, per Nick’s orders to keep shooting. As he puts it, “it’s important to remember that nobody died.” That’s not a great measure for workplace success. 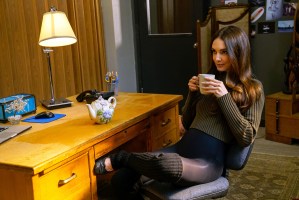 The Nick/Monica romantic pairing gives me pause, though. The characters have a great dark, sarcastic chemistry. However, Wayne puts it best when he finds out. He yells at Nick, “You slept with your subordinate? In 2021?” Even though they have the same title, it’s clear Nick is in charge. It helps that at the end of the episode, Monica lays out her rules for the relationship, placing her fully in power.

My issue is I don’t love the way they’re kind of casually joking about sexual harassment in the workplace. Are Nick and Monica entertaining together? Yes. Did I bust out laughing when Wayne asked if he could sleep with Nick in order to get final say on costumes? Also yes. Though I largely chalk that up to Kevin Daniels being an utter delight. This storyline could easily go sideways. Scott Foley and Mallory Jansen are doing a lot of heavy lifting here with their chemistry, so I’m trying to reserve judgement.

“The Flute and the Tuba”

As will quickly become my brand, the Gabby/Reggie plot is working the best for me. In order to stoke drama between Gabby and Reggie, their audition triad is completed by Brittney, the other ballroom dancing twin. She is the stereotypical skinny blonde who lives to put down other people. Brittney tries to play on Gabby’s insecurities by bringing up insecurities about her body and whether Reggie could be interested in her.

Gabby has a lot riding on this show. She quit her job in order to devote all her attention to the show. That was a bold choice. She seems to have decided this is her last chance at her dreams. Doing the math from the pilot, Gabby is at most 26 years old. She has plenty of opportunities to chase her dreams, but I can respect that desperation.

Her breaking point comes when she overhears two crew members talking about how Nick has offered a bonus to whoever can figure out Gabby’s baby daddy. When she confronts Nick, he tells her to have more self-esteem. She instantly retorts, “Don’t deliberately put me in a situation that undermines my self-esteem and then ask why I don’t have self-esteem,” which is my favorite line of the episode. Regardless, Nick puts the bug in her ear that Reggie has feelings for her, too.

The scenes in which Gabby and Reggie are alone together are the ones that work the best for me. When Reggie invites Gabby to check out his trailer, they banter back and forth about how she is unemployed, but it’s nice the show gave the trailer to the cast member most in need. Reggie reminds her he lost a $13 million contract, so he’s pretty devoted to getting his sponsorships back. They have a super flirty moment where Gabby jokes the show gave him a vibrator. It’s really a massager of some sort. He puts it on her IT band, which is apparently a muscle in your body. Then he asks her out to dinner after auditions.

The next morning, Gabby brings Reggie a smoothie before they start. She finds Brittney giving him a blowjob. Gabby backs away, but Brittney sees her on her way out of Reggie’s trailer. Nick finds Gabby. He is mainly mad that no camera crews were there, but he tells Gabby to get mad at whoever told her she wasn’t sexy. Is he totally trying to build her confidence to further his own need for this manufactured storyline? Of course he is. But it’s also kind of sweet. While Gabby does cancel plans with Reggie, the heat is definitely there between them during their audition. Simone Recasner and Ser’Darius Blain’s chemistry is just sizzling on the screen.

“I’m So Unhappy In This Marriage”

Going back to my least favorite storyline of the pilot, we learn more about Julia and Kevin’s marriage. It works better for me this week. I chalk that up to Teri Polo. Julia confronts Kevin about the amount of porn he is watching. She uses that as her bargaining chip for doing the show. He is not at all on board with this. While the producers are over at the house getting interviews with the two of them, Kevin can’t be bothered to engage. He ends up walking away. When Julia follows, he tells her he’s moving out. In the most crushing blow, he tells her he doesn’t even know if he likes her. Considering he does this while a camera crew is in the hallway, I see no redeeming qualities in Kevin. At all.

After defending Gabby in the locker room when Brittney starts in with her nonsense, Julia turns on Raven by saying what she does with her body is bad for women and families. It’s ridiculously hypocritical, and it drives a wedge between Julia and the others, as it should. Although Raven’s webcam is where Kevin has been spending his money, so the drama is just beginning. 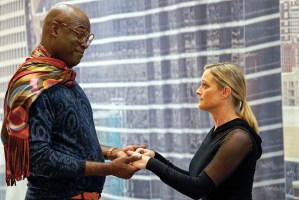 The scene that fully wins me over to Julia this week is when she has a minor breakdown and excuses herself to a hallway. Wayne follows her and gives her the most heartwarming speech about how she’s in a transition, just like the rest of the world. I could transcribe the entire speech, but the words are nothing without Kevin Daniels’ delivery and Teri Polo playing off of him. I want to record it for when I’m doubting myself.

“Why Does It Always Come Back To Stupid Paige?”

In Mike’s storyline this week, we learn a lot of his issues are about him cheating on Paige. He is blatantly obvious about it when he decides to rewrite the Prince’s storyline as a man who is committed to the White Swan only. He won’t even look at his Black Swan, played by Paula. 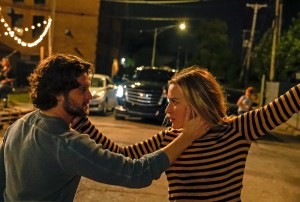 The scene that saves this entire storyline for me is the one where Paula finds Mike at the bar with his friends. She confronts him about why he won’t dance with her. Like a schlubby Greek chorus, his friends complain about how everything comes back to his stupid marriage. I love every single one of Mike’s friends. I want them to just follow me around and sarcastically comment on things. One of them, Anthony, apparently watched Misty Copeland’s Masterclass during Covid, so he helps Mike and Paula practice their choreography. From the sidelines, another of his friends yells at him to put in more pathos and conflict. This whole montage is the best.

My only quibble with the scene is it seems to come as a surprise to Paula that he’s doing the show to get his wife back. However, Paula was right next to Mike during the confrontation with Paige in the previous episode. This shouldn’t surprise her. It was just a weird bit of continuity.

The episode ends with the casting announcement. Raven and Julia play the two queens, ensuring the continuation of their conflict. Mike and Paula play Benno and his wife, nicely setting up a potential romantic arc. Reggie will play the Wizard. He seems pretty psyched to find out there’s a wizard in the show. Claude, a character we have barely seen, will play the Prince. Simon is cast as the Black Swan, while his twin Brittney will play the White Swan. Proving that Nick knows absolutely nothing about ballet, Gabby gets cast as the understudy. For all the roles. He thinks he’s setting up a great underdog story, but I just laughed at the ludicrous thought of one person learning every single role. What happens if two people can’t perform, Nick?

Overall, this episode was one that worked for me the more I rewatched it. It was a lot heavier on the funny than the inspirational. For the small quibbles I have, I laughed out loud so many times this week. I cannot wait to see how the season unfolds. Find us on Twitter to share your ‘The Big Leap’ 1×02 thoughts. Be sure to check out our site for more content!