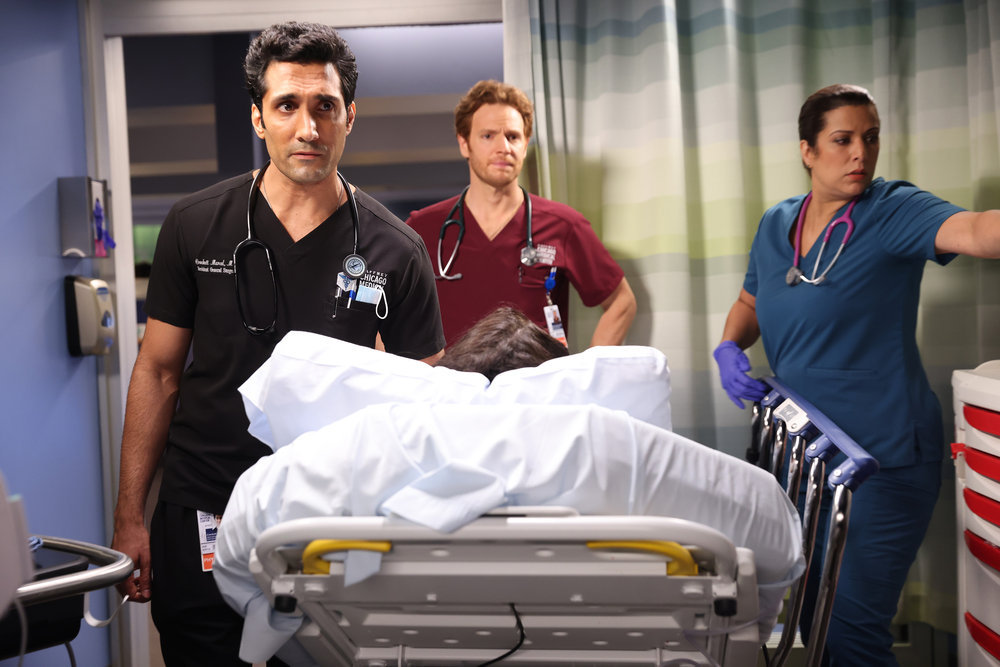 The wait is over! Our One Chicago universe has returned to us! But with Med kicking things off, it’s clear that a lot has changed. We say goodbye to two more characters from the show. April is said to be in nurse practitioner school but isn’t seen saying her goodbyes. But Natalie and Will are able to have a moment while he’s helping her pack. Ethan wasn’t seen but he will be returning. And Will is thrown into an investigation by Goodwin while Archer and Charles deal with twins who want to be identical inside and out. So keep reading for my Chicago Med 7×01 review!

I’m still not entirely sure how I feel about Archer. Most of the time I feel like I don’t like him. But then there are times where I feel like maybe I could. Or that he could redeem himself. Though the way he tried to blame Dr. Charles for Ethan getting shot was definitely not okay. And I was pleasantly surprised to see Charles turn things around and stand up for himself by suggesting that if it was anyone’s fault, it might be Archer’s. And Charles isn’t the only one that is having a hard time with Archer because Will is struggling with him as well. So I’m just not sure if they are going to try to give the character a redemption arc or if they are trying to make him out to be a villain. But I guess we’ll all just have to wait and see! 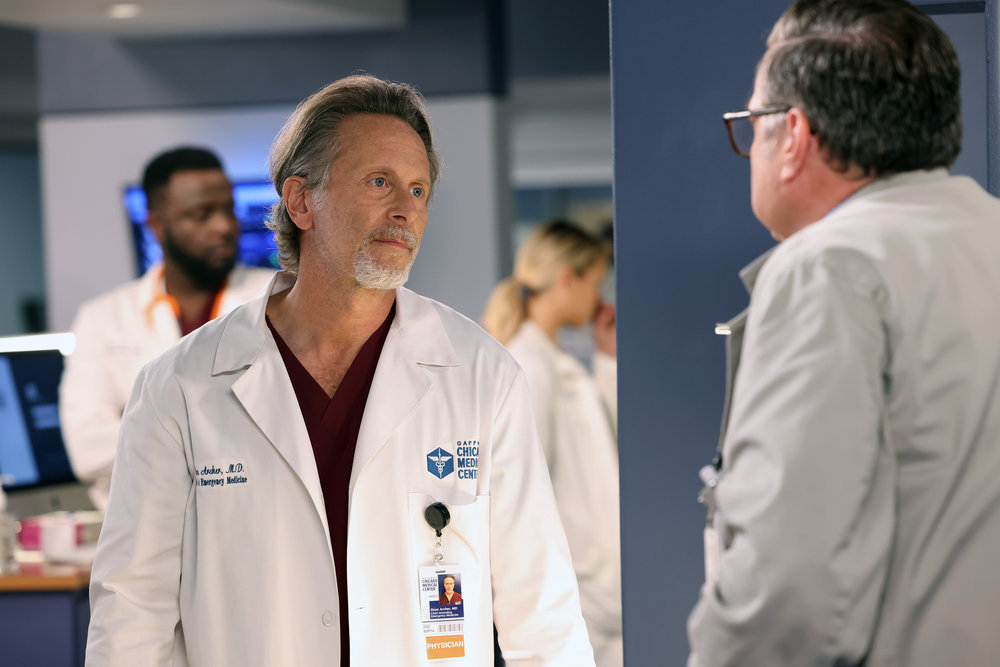 Then you have Will and Marcel. Things were a little awkward in the beginning and Marcel obviously wasn’t too happy about having to ask Will for help with his patient. But I was hoping it would go a long way to getting the two of them to be nicer to one another. I’m not expecting miracles but I would love if they weren’t constantly glaring at each other. Will accusing Crockett of doing the procedure for the purpose of higher billing certainly didn’t help things. But I am glad that Will apologized and I think that if the two of them could pull their heads out of their asses they would be able to see that they could actually make a damn good team. So here’s to hoping on that one.

I knew that Sharon wasn’t going to make it easy for Will to come back. But I didn’t expect her to have him go undercover. Though Will clearly knows how to be pretty sneaky. And he does already have a bit of a relationship with Matt so maybe things will work out. Will is certainly going to have his hands full with medical cases and an investigative case as well. There is also the clear dislike Will and Archer have for one another, which could make things difficult for Will since Archer is the Chief now. But on top of that, there is the awkwardness between Marcel and Will. Hopefully, they will be able to bond over Natalie and how they’re both going to miss her. But I could be asking for too much on that one.

Gemma and Emma, where to begin? I’m glad that Archer was able to put aside his personal feelings and call Charles in as soon as he realized it was necessary. But their rivalry clearly continued as the case became more difficult. I think it was clear that Emma was the pusher in them being exactly alike. Sure, Gemma nodded her head and seemed to agree. But Emma seemed to be the pushier of the two insisting that her sister couldn’t have surgery unless they did the same thing to her. Then they freaking switched spots for the surgery! Jeez, that had my heart freaking racing! Thank goodness Charles was able to realize it and stop it before it went too far. And there does seem to be a sort of truce between Archer and Charles for now. Kind of.

I’m immediately in love with Stevie. Maybe it’s in part because I’m such a huge fan of Kristen Hager. But I freaking love her. And the hopeless romantic I am can already see the sparks flying between her and Will. Watching them compete is definitely going to be fun. And honestly, I just need Med to give me some more stable couples. Jeez. These doctors need and deserve some love! Then there is Dylan and I’m just as in love with him. If we had to get new characters, these were some excellent choices. I’m so interested to learn more about his background as an officer and what made him switch to being a doctor. If the purpose of the premiere was to give a little bit of a reset and try to get viewers reinvested in the show, it certainly worked on me. I’m so ready for the season! 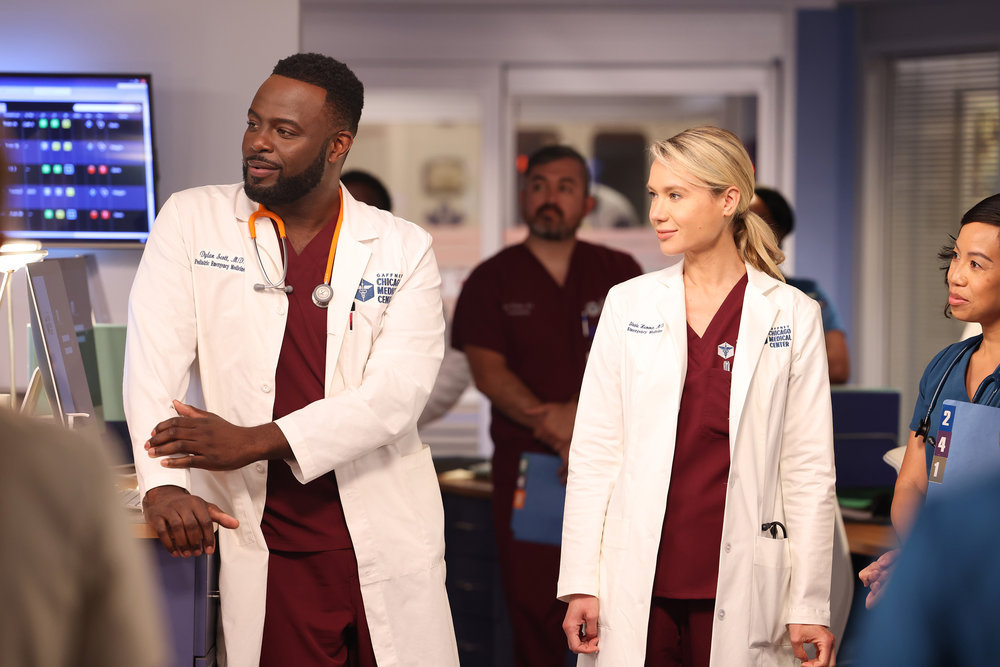 What did you think of Chicago Med 7×01? Do you think our new characters are going to be sticking around for a while? Or do you think we are going to have some more departures? What did you think of Stevie and Dylan? Are you interested in their backstories and what kind of development we’re going to see from them? Do you think we’re going to get stable romances? What about Stevie’s mom? What do you think is going to happen there? And is Will going to be able to get to the bottom of things? Do you think Matt is getting kickbacks? Or is he innocent? Find and follow us on Twitter @capeandcastle to share all of your Chicago Med 7×01 thoughts with us! You can find me on Twitter @Sarah_Jeanne17! Also, be sure to check out our site for more articles on all things Disney and beyond!