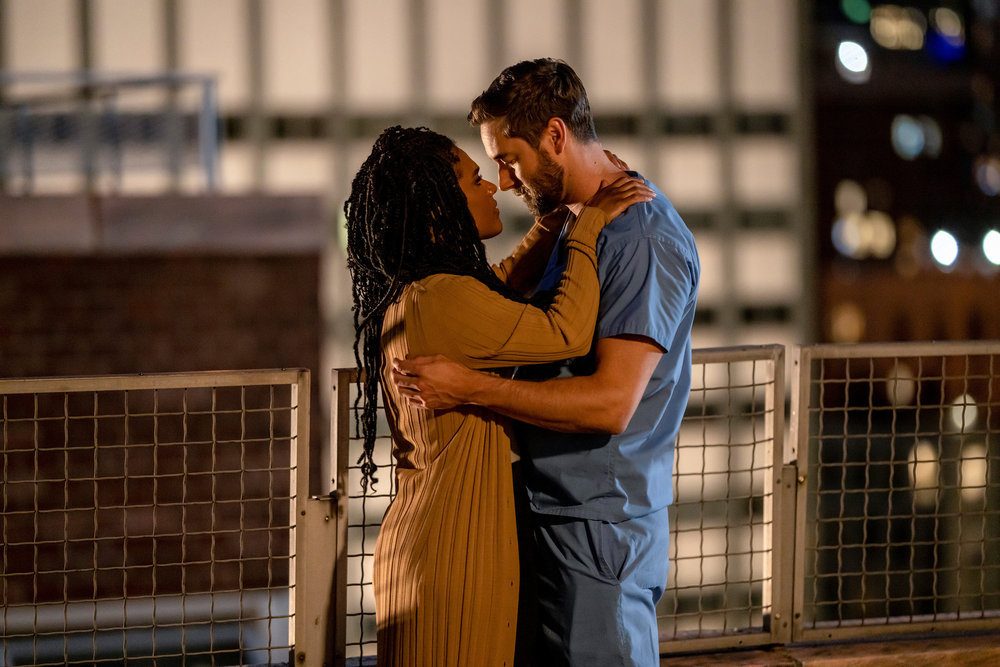 The amount of excitement I felt that this show is finally back is immeasurable! Helen and Max have finally entered into a romantic relationship that had me freaking out! Floyd continues to deal with the awkwardness while around Baptiste due to his relationship with Lyn. Big yikes! Meanwhile, there are fires breaking out all over the hospital, leading to some majorly dangerous situations! Which led to Iggy having to confront someone dangerous from the past. Even bigger yikes. So keep reading for my New Amsterdam 4×01 review!

I was nothing but smiles when we got to see Max and Helen finally getting together. But then she threw out that she needed to go home to London on a more permanent basis. I may or may not have shouted in anger at the screen. Not that I don’t understand where she was coming from. I just couldn’t believe that we would finally get Max and Helen together only to have them break up before they’ve even really begun. But I should have known better than that. There was no way Max was just going to let Helen leave forever. Though I certainly didn’t expect him to make the decision to go with her instead. But it was pretty freaking romantic! Even if I have no idea how all of it is possibly going to work out. I’m going to try and trust the show and call upon patience I don’t really have. 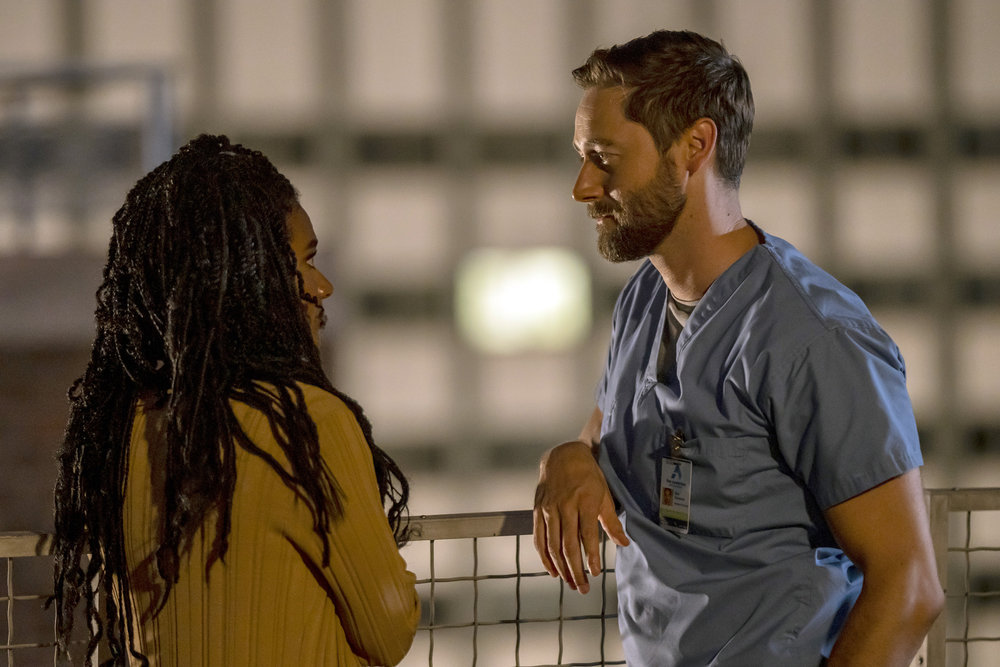 I’m just glad that Max is finally doing what’s right for him. It seems like we’ve watched him spend so much of his time asking others what he can do to help them. So much time giving all of himself for everyone else and putting everyone above himself. It was wonderful to finally see him putting himself and his happiness first. And Luna’s. Because Max being happy is a huge part of her being happy. And Helen is so good with Luna. No matter how things end up working out, I’m going to keep holding out faith that they are going to work out. And I’m going to enjoy the ride of watching Max and Helen figuring things out.

The fires happening all over the hospital were pretty terrifying. When Floyd and Lyn were caught in a bit of one of them, it definitely had me gasping. That was a freaking close call. But then Iggy brought in Mary and that was even more terrifying. The tone she uses when she’s speaking to Iggy and her facial expressions are nightmare-inducing. But she did face Iggy to confront some issues of his own whether I want to admit it or not. And Mary did help with information on the arsonist. Everywhere hit by the arsonist had been used as COVID overflow units. It was sad that the man had lost his wife to COVID but hurting other people, innocent people certainly wasn’t the way to deal with that.

There were more fires happening besides the literal ones too. Lauren lit a fire of her own right under her new residents’ asses. And while I was kind of okay with her being a bit of a hard-ass with them, I was kind of with Leyla when she got pissed at Lauren for telling the others they were dating. And Lauren really can’t use the excuse that she is trying to work her program when she’s keeping a huge secret from Leyla. If the two of them spoke about their relationship and agreed to wait before telling people, then Lauren should have been respectful of that. And I completely understand where Leyla was coming from in not wanting the other residents to know about their relationship yet. She didn’t want anyone seeing favoritism. Though Lauren did make up for it a little by yelling at Leyla in front of everyone.

Max wasn’t the only one faced with making big decisions. Because Floyd is going to have to make some pretty big ones himself. He and Lyn need to figure out what they are going to do about their situation. And they need to figure it out sooner rather than later. Because the longer it goes on, the worse the fallout is going to be. Then we have Iggy. I know that he seems pretty set in his decision of no longer seeing patients. But I don’t think it’s going to be that simple. And I don’t think we’ve heard the last conversation about it. I also think that Iggy is going to have a hard time staying away from patients. But I guess only time will tell. 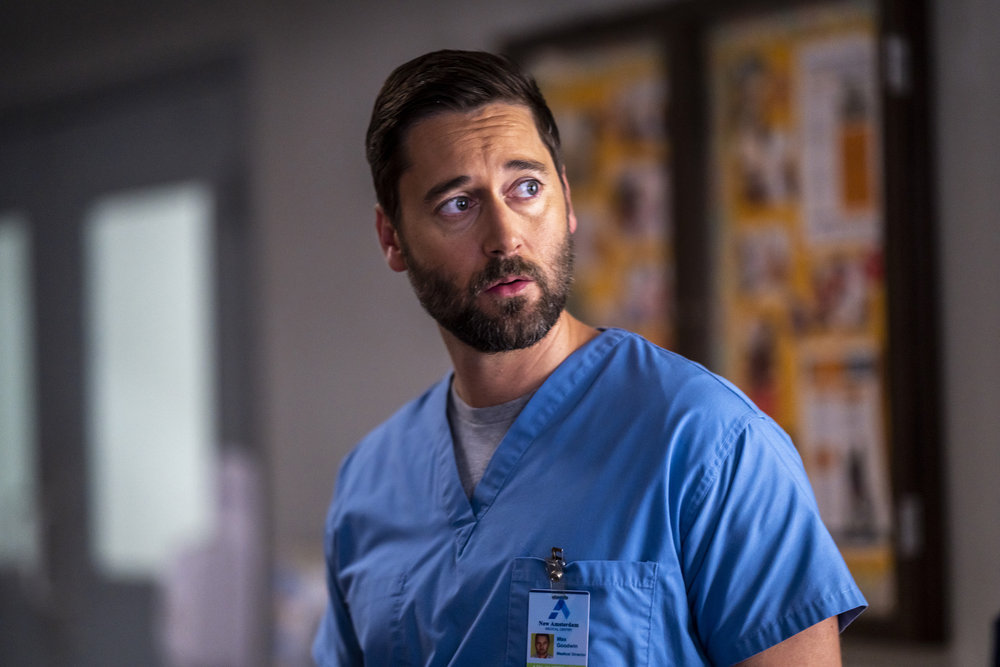 What did you think of New Amsterdam 4×01? Do you really think that Max is going to leave the hospital and go to London with Helen permanently? It can’t happen, right? There must be something that sends or keeps them home, don’t you think? What about Iggy? Do you really think he’s done seeing patients? Or is it only temporary? Do you think Leyla was right to get upset with Lauren about telling everyone they were in a relationship? Or do you think it was good for Lauren to put it all out there on the table? Do you think Floyd and Lyn are going to figure things out? What about Baptiste? How are things going to go when he does eventually find out? Find and follow us on Twitter @capeandcastle to share all of your New Amsterdam 4×01 thoughts! And you can find me on Twitter @Sarah_Jeanne17! Also, be sure to check out our site for more articles on all things Disney and beyond!