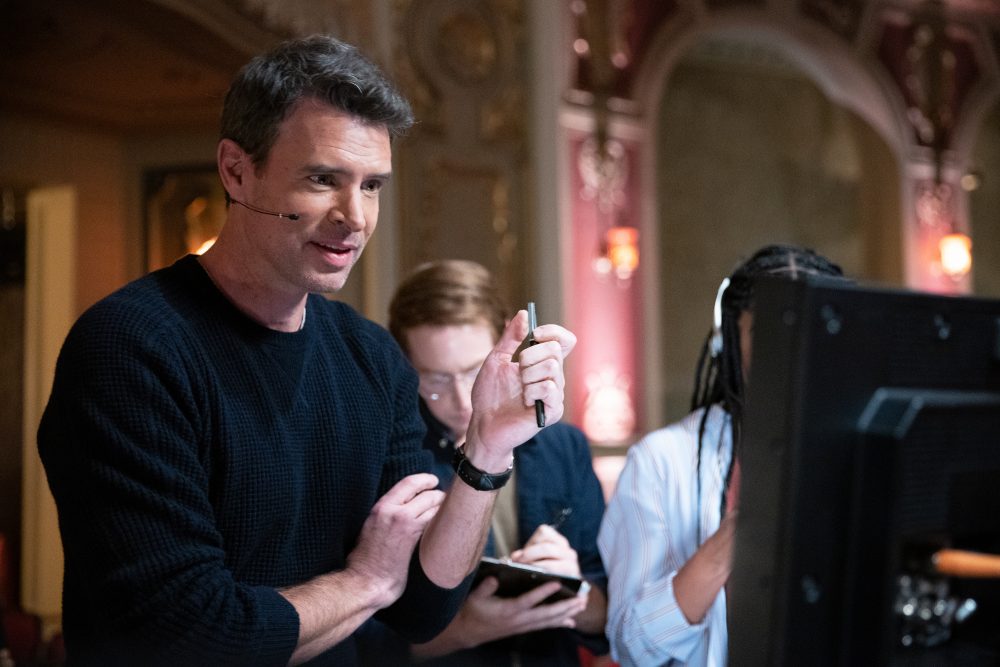 Every now and then, a show comes along that seems like they took all of the things I love about television and they just blended it all into a new show. When I read the description for The Big Leap, I had that exact feeling. To say my hopes were high going into this show would be an understatement. I asked to recap every episode of it based on a two-minute trailer. Fortunately, the show lives up to its potential. I have some minor quibbles with things, but I will chalk a lot of that up to needing to establish characterization in a pilot, and I have hopes they’ll work those things out. However, there are characters and relationships I already adore. So, let’s dig into my ‘The Big Leap‘ 1×01 review!

Because it is a pilot, there has to be a lot of exposition about the characters and the premise of the show. Essentially, this is a behind-the-scenes look at a fictional dance reality show called The Big Leap. They end up with 20 amateur dancers who will stage a production of Swan Lake. I am personally a sucker for these types of shows that have fictional shows set within them. Sometimes, they’re like 30 Rock and are brilliant. Sometimes, they’re like Studio 60 on the Sunset Strip, and the less said about it, the better. The most important thing to remember is the actual happenings of The Big Leap as a dance show aren’t that vital. It’s behind the scenes that truly matters.

Between the dancers, their families, and the production staff, that’s a lot of characters to keep straight. Understandably, we narrow in on just a few people with other characters who will surely be developed as the series continues. Let’s meet them in order of the people I’m most invested in.

From the trailer, I was in love with Gabby Lewis. A single mom who lost out on a dance scholarship to NYU because she found herself unexpectedly pregnant her senior year, she hopes the show will be her second chance to chase her dreams. We learn all about how her high school boyfriend/bestie Justin was in the closet. They haven’t spoken since high school until she goes to win him back in the most endearing dance number of the pilot. Unfortunately, during their audition, Gabby slips in some “stripper dust” left over from the previous dancer. Gabby gets cut, but Justin goes on to the next round.

Instead of taking no for an answer, Gabby goes back to the producers as they are trying to woo NFL player Reggie Sadler. Gabby sees an opportunity and volunteers to teach Reggie the choreography in exchange for a second chance. Producer Nick jumps on it and okays it. Simone Recasner was already electric in her scenes, but once she starts working with Ser’Darius Blain as Reggie, it’s even more vibrant. Their flirtations as they’re learning the choreography are adorable. It’s the scene where they’re in the diner eating together, though, that truly won me over. Between the banter over how many calories would be in a cooked human and Reggie telling Gabby she’s pretty, I was in a puddle.

Gabby already has plenty of layers. There is the single mom in search of her dreams aspect. Her mother has alluded to some depression issues, and I’m always a sucker for a mental health storyline when done well. Add in a plus-size actress as half of the potential main romantic relationship on the show, and they have me fully hooked here. 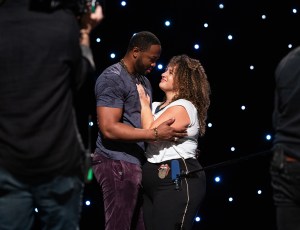 Since I am already all in on Gabby’s storyline, Reggie Sadler is pretty well intertwined with that. Reggie is a currently suspended NFL player who is fresh off his third DUI and some offensive comments about Michelle Obama on Twitter. He needs an image rehabilitation, and The Big Leap is going to be the first step on the comeback tour. Once Gabby makes the case to him, he agrees to learn the choreography and practice with her in order to make it through the audition.

After Reggie gets arrested defending Gabby’s honor, though, it seems like he isn’t going to make it to the audition. Naturally, he makes it. He and Gabby absolutely kill their audition, and he even does the grand lift with her at the end. Producer Nick sees their chemistry and starts orchestrating their love story and subsequent heartbreak as a main storyline of the reality show.

On paper, I should hate Reggie. Ser’Darius Blain is so completely charming in the role, though, that I can’t. I was already familiar with him from his work on Charmed, so he was a part of the reason I wanted to watch the show. He has this underlying joy in his demeanor. It really comes through when he and Gabby are watching the taped performance of Swan Lake, and he’s starting to get excited about doing some of the dance with her, specifically the big lift. I want to root for him, not just as a potential romantic pairing. I want to root for his redemption.

The man pulling the strings behind the curtain is executive producer Nick Blackburn, played by the always endearing Scott Foley. I have loved Foley’s work going back to Felicity, so he was another major draw for me to this show. As a character, Nick is a total jerk. The dancers on the show are nothing more than pawns for him to manipulate in order to get the highest ratings. He will exploit everything for the storyline, whether it is Mike’s recent divorce or Gabby’s unnamed baby daddy.

There are hints to depth, though. We learn that he is divorced and fighting to keep his ex-wife from taking their son to London. The way he plays off the other crew members on the show, specifically Alan, is pretty entertaining. This is another example of the casting saving this character. If Nick didn’t have Foley’s charm, then the viewer is going to root against him. It’s such an easy cliche to make the producer the villain of the story. I don’t think they’re going that route, though, and I really appreciate that. It makes the show more interesting. Having also seen the second episode, there’s something coming up that could go very poorly if they don’t handle it well, but I have hopes so far.

Now we’re into the couple of characters that I’m still trying to feel out. First up is Mike, a recently separated and unemployed white guy. We know that he’s sensitive because his friends reference Brene Brown to him. Between this and Ted Lasso, Brene Brown has just become shorthand for guys in touch with their feelings. Mike decides he’s going to win his wife Paige back by auditioning for this dance show.

He has a great group of friends who support him just enough while also questioning if he’s making good decisions. I hope to learn more about these friends. They amuse me so much. The biggest point working in Mike’s favor for me right now is his flirtation with Paula, played by the delightful Piper Perabo. They have a goofy dance number together that feels a touch forced, but I can see the underlying chemistry. For me, the moment that pulls it together is when Mike’s wife Paige shows up. He tries to convince her that he liked her. Paula smacks him and he instantly corrects himself to saying he loved her. It’s a funny character beat, and I really like the way they play off each other.

Eventually, Mike’s friend asks him if he really wants Paige back, or is it that he wants himself back. That’s the question that draws me into Mike. It’s way more interesting for him to search for happiness within himself instead of his wife. 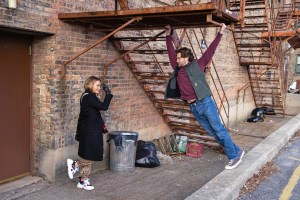 We do not learn a whole lot about Paula in this episode. We know she is a tap dancer. She beat breast cancer the year before. Paula also reads Brene Brown, who is the person that inspired her to quit her awful corporate job. Paula’s previous job was as the vice president of restructuring for an automotive company. It just so happens it is the same automotive company that laid off Mike the year before. Is it slightly forced tension? Sure. Am I still interested in seeing where this goes? Absolutely.

“Our Whole Lives Are Online” 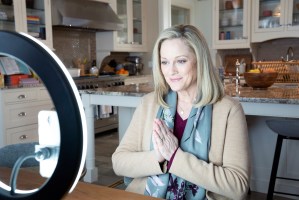 I am waiting to see the depth that develops in Julia because it feels really one-note so far. Personally, I don’t love the whole anti-porn, anti-sex worker feel she has at this point. There is a sex worker in the cast named Raven. As we learn in a montage, Raven has danced for Julia’s husband at the strip club. I just don’t want the show to devolve into anything anti-sex work because there’s way too much of that in the media. Personally, I would like to see Raven and Julia become friends on Julia’s way to finding her own identity. There’s potential in this storyline, and I mainly say that because Teri Polo is such a good actress that she will bring out those possibilities.

There are plenty of others we meet who have great potential. Gabby’s high school bestie Justin has an interesting backstory. One of the hosts, Wayne, is someone I need to follow me around and give inspirational speeches. The other host, Monica, hates everything and everyone, which I find utterly delightful. There are the twins, Brittney and Simon, who may be a little too close for comfort. There’s the aforementioned Raven, who has the potential to be my favorite character.

The end of the episode sets up the realization that Nick is going to engineer a love story between Gabby and Reggie, which he hopes will end with heartbreak. The episode is very exposition-heavy, which is just necessary with any pilot. However, there are some great comedic moments sprinkled throughout. I think when the show focuses more on the comedy than the inspiration, it tends to be stronger. Overall, I am very excited to see how the show unfolds. The first and second episodes are currently available on Hulu. Otherwise, I will be there every Monday at 9/8c. Find us on Twitter to share your ;The Big Leap‘ 1×01 thoughts. Be sure to check out our site for more content!