Last week (review here), the unit came unhinged while hunting Nicte, the creator of the spree. Still, they were strong enough to not let the effects of her spell pull them apart. This week, the fate of Nicte was decided but so was Alder’s fate. Tally was determined to bring all of Alder’s secrets to the surface before it was too late. 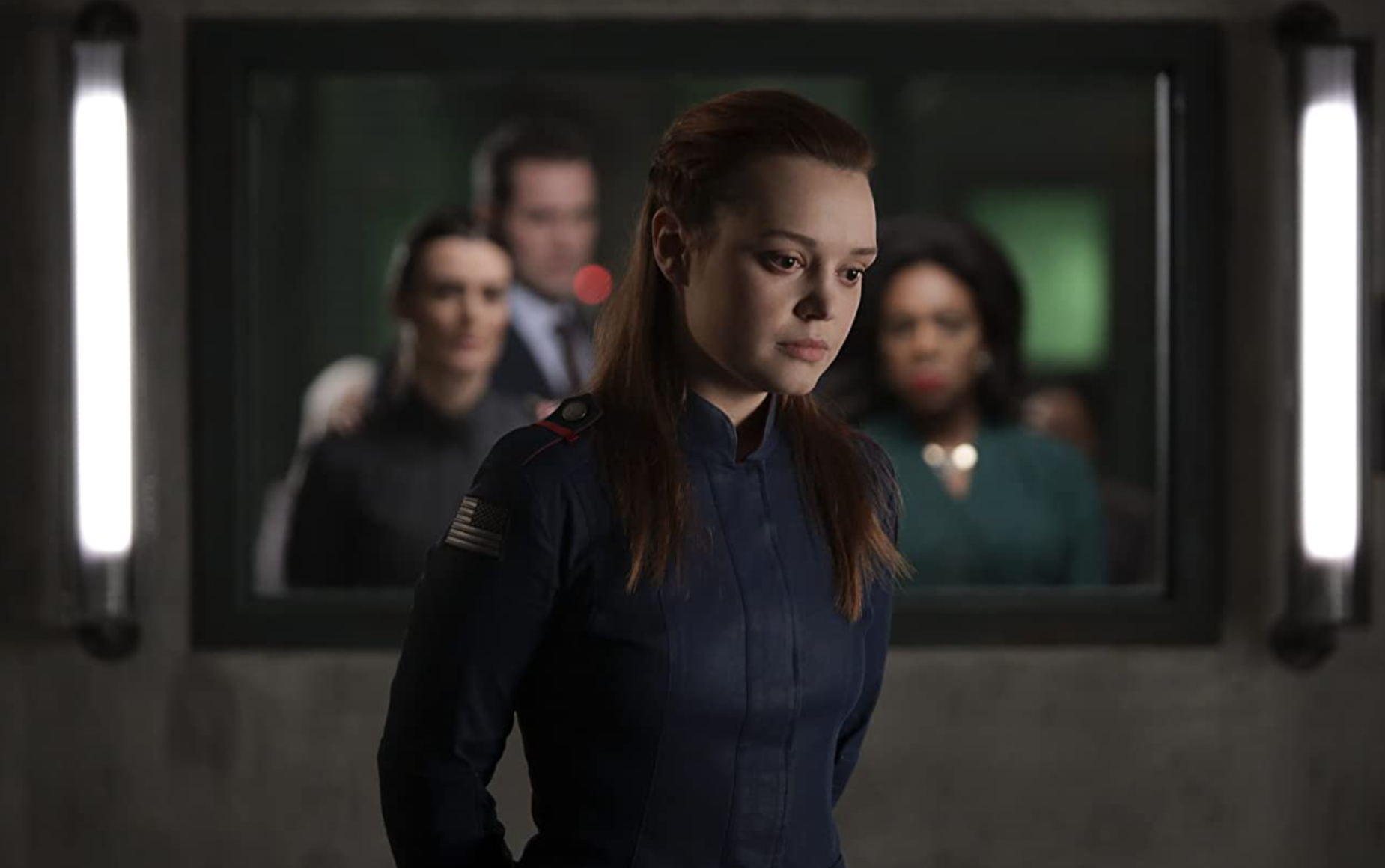 ‘Motherland: Fort Salem’ 2×09 “Mother of All, Mother of None” via Fangrlish

Nicte Batan (Arlen Aguayo-Stewart) was held up in interrogation but before it got underway Madame President Wade arrived with the vice president in tow. More so, Nicte wasn’t talking to anybody but Tally (Jessica Sutton). While Tally was nervous to talk to her, she was able to get the answers she’d been seeking since the beginning of the season. Nicte started the spree in an effort to fight Alder and free witches. She’d only ever taken the lives of others in honor of those killed in the fire by Alder, and then some to match the number of witches killed in battle later on. 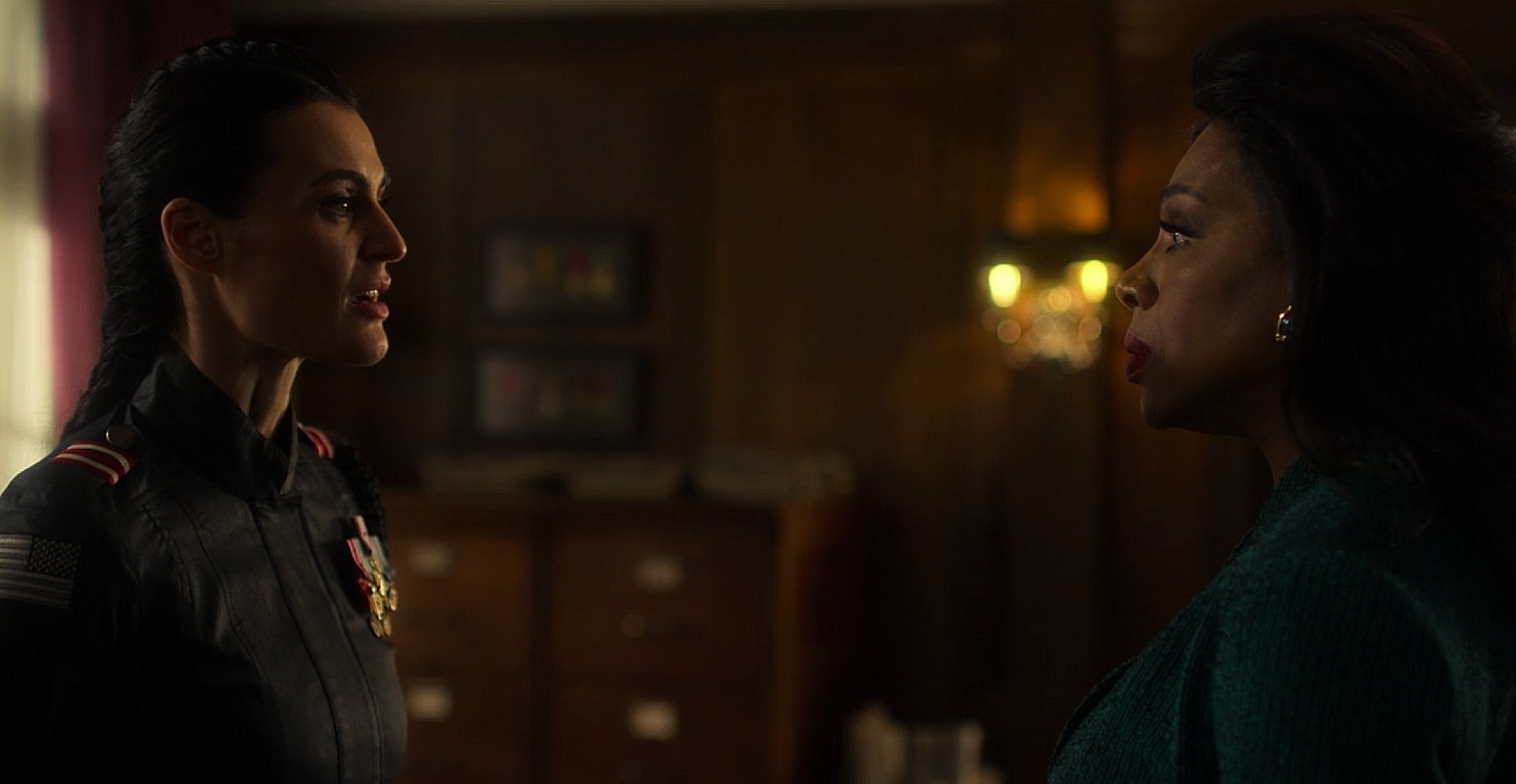 All this checked out and not only were we finding Alder highly suspicious and under the spotlight but so did President Wade and Petra (Catherine Lough Haggquist). This was everything we’d hoped for. Intense and satisfying, we may have taken too much pleasure in Alder’s decision to step down from leading the Army. No amount of puppeteering would get her out of it either. Much like any typical scandal, all Alder’s doings were swept under the rug. It wasn’t much of a shocker honestly because it was so relatable for our own political system.

During her three-hundred-year run, not only in teaching up-and-coming witches but also battle, Alder’s been through so much. After doing it so long, lines have blurred about what’s right and what’s wrong. Looking back at how she’s treated Raelle more like an object than person lately is a great example. Alder is ready to step down. It’s past time for change. This doesn’t diminish what she’s done. Hell, she leaves behind one powerful legacy to live up to. 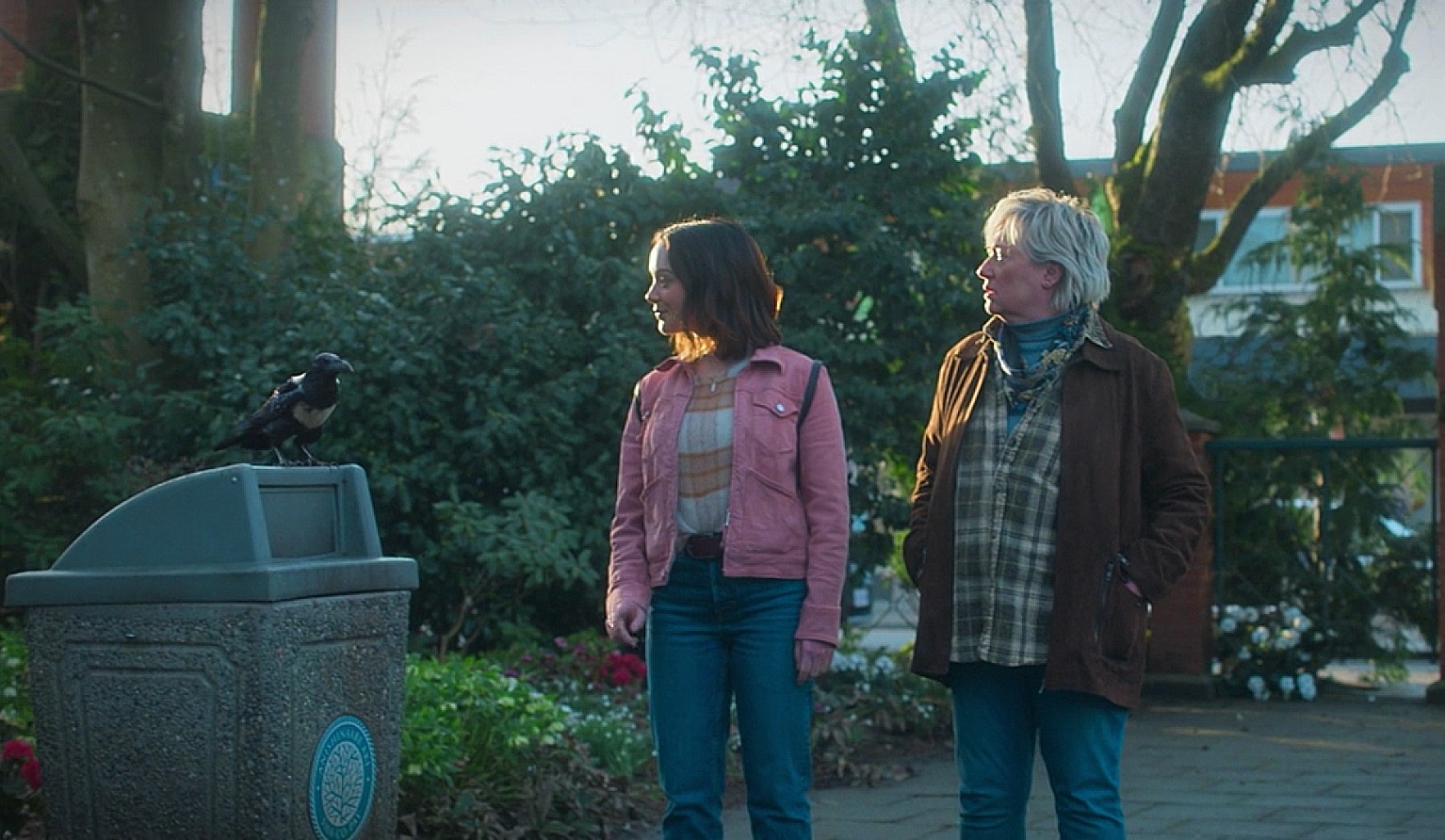 We loved getting our Rayalla moment. Sure, the phone doesn’t make up for not being together but we’ll take what we can get. We’re just thrilled they’re on the precipice of getting back together. But, while apart, they both discover now lengths to their powers. Scylla (Amalia Holm) teaches herself to spell a crow much like Nicte did with bats and the results were fabulous. This witch is a quick study and we’re always impressed.

But for the con-side? And yes, there’s a small one. Manipulating people is still manipulating people. When Scylla manipulated a park of people to waltz the Morgan’s Whisper we got a painful flashback to the show’s premiere when the Spree had caused so many people to jump to their deaths in a mall. So, we hope to see how Scylla will use this in an effort to help bring down the Camarilla. Hopefully, it won’t be to make them kill themselves, though it’s debatable that they should. Instead, on a higher road, we hope it will get them to surrender. 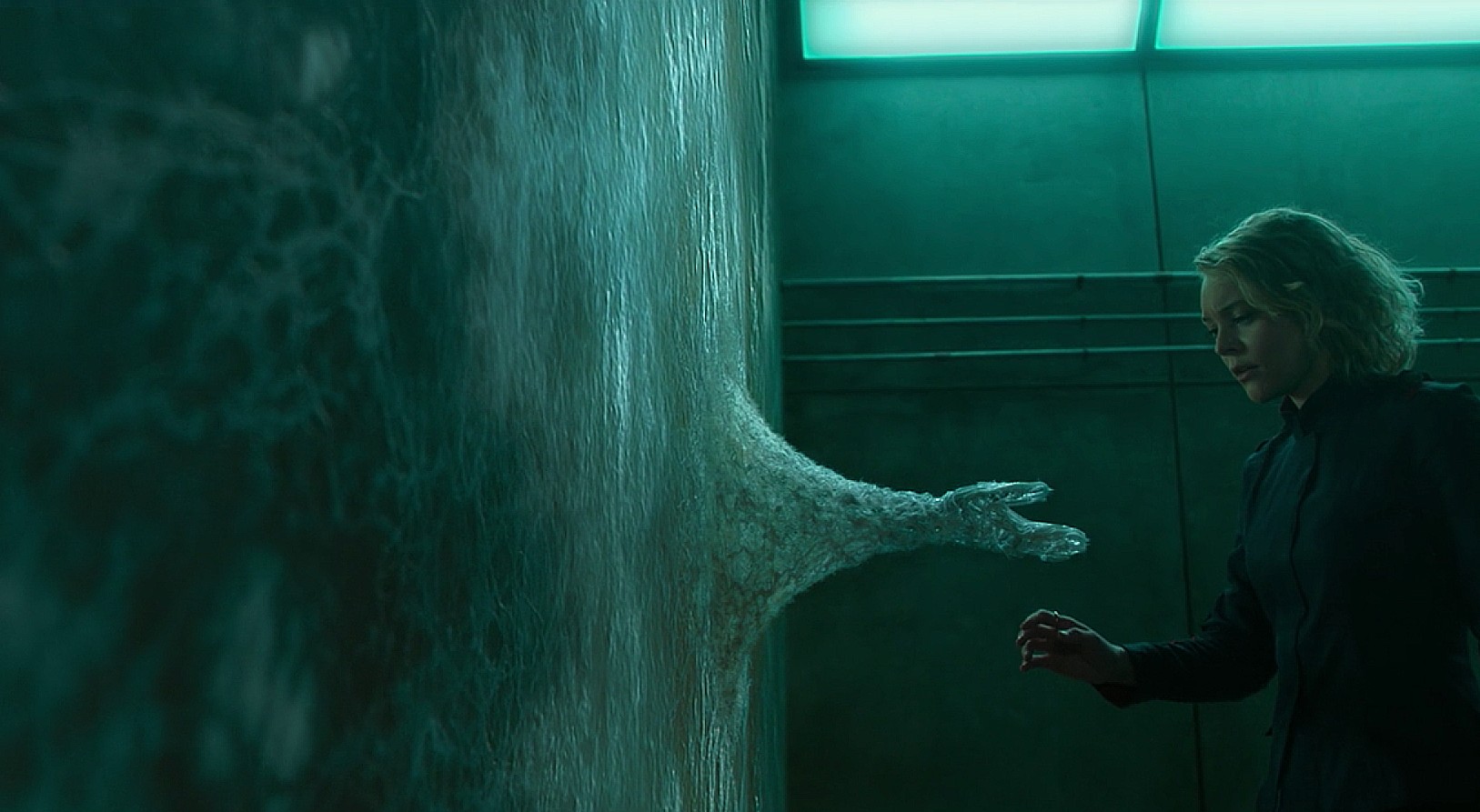 Meanwhile, Raelle (Taylor Hickson) was further objectified. Taken off active duty against her wishes, she was told she’d be parading around the country to help bring in more people to the witch-testing centers. Degrading and a disgrace to Raelle and her abilities.

And then we understood why Alder was so protective of the mycelium within Raelle. Taking time to contemplate the next step of her future, Raelle was pulled into another vision with the mycelium inside of her. In this vision, dozens of witches were tied to stakes, burning long after their death, with Alder crying out in pain. This had been the first Camarilla attack. They’d killed her first coven brutally. And, with a powerful song of grief, the mycelium was born and so was Fort Salem. An unbelievably stunning scene. We definitely wept with Alder.

We loved getting to see Raelle dive even deeper into this connection and where it stems from. Learning that the witches who’ve died in the past, including her mother, are within her, powerfully and spiritually, was both beautiful and tragic. Raelle discovered what she needed to do and going on a tour like a trophy wasn’t it. 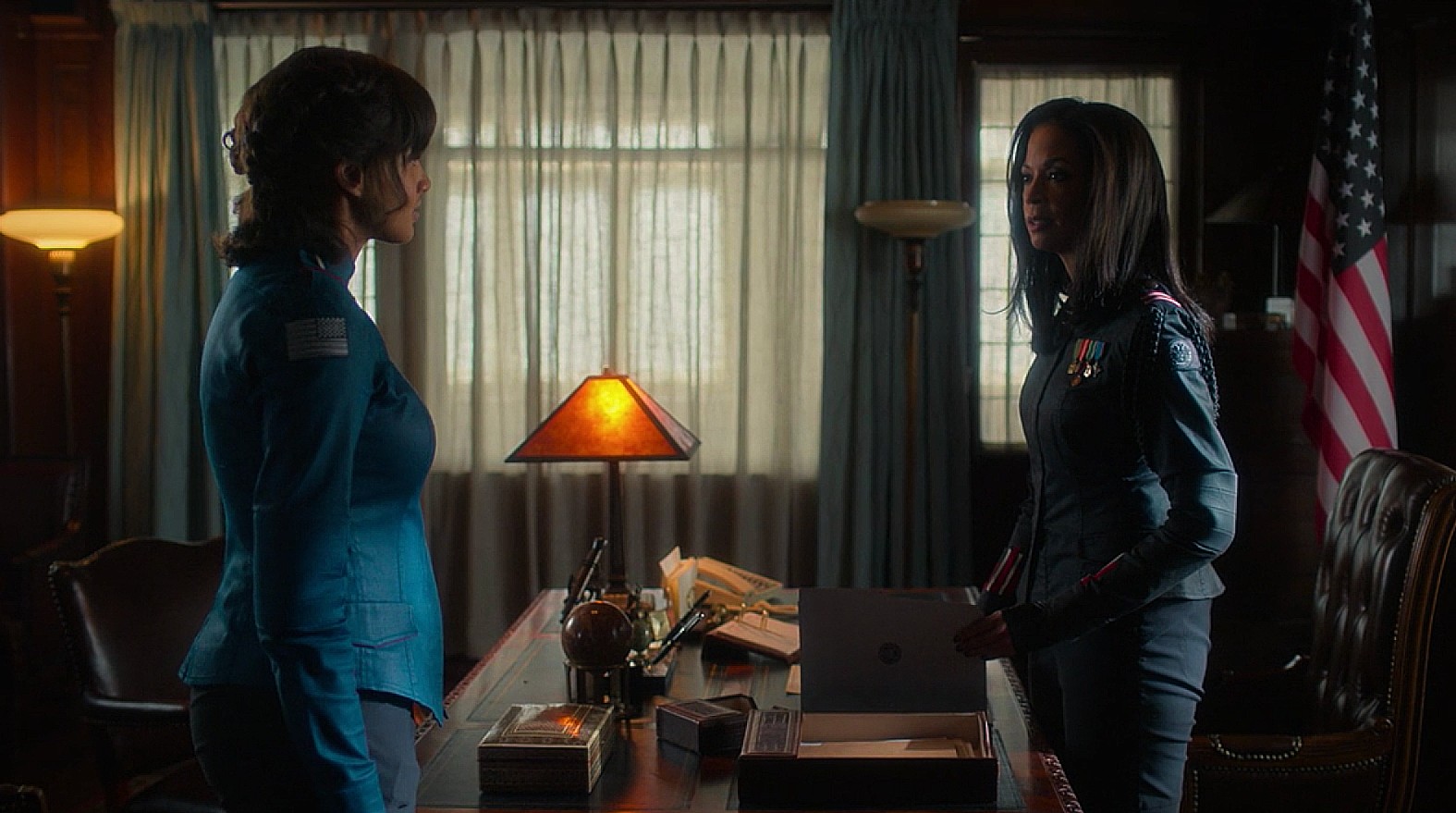 With Petra stepping into Alder’s role soon, Abigail (Ashley Nicole Williams) once again came forward to ask to go to the front lines of the Camarilla war. After avenging her cousin, Abby was ready to be at the head of the war and possibly even lead it.

Later on, she got a glimpse of those that we’re positive will be standing next to her as the event called the Great War comes closer. Not only Tally and Raelle but Adil (Tony Giroux), M (Ess Hodlmoser), and Gregorio (Praneet Akilla) have joined her inner circle and we are thrilled to see Abby no longer feeling like all of this responsibility is only on her shoulders. She has so many she can trust and put her faith in and that helps make her magnificent. Petra’s finally coming around to the powerful witch she’s become outside of War College is fantastic. We applauded so hard, thrilled that she could finally see what we’ve been seeing since this season’s premiere.

When Tally stood in front of Nicte to take her place and be struck down to meet the Goddess. While Alder only hesitated for a moment before going through with the punishment. It was Raelle, followed by Abigail, Gregorio, and M that really put a stop to this. They weren’t going to let Tally and Nicte be put to death for Alder to keep her dastardly secrets when all witches should’ve been coming together to fight the Camarilla.

This was without a doubt the most powerful scene of the season so far. This not only brought everything the unit has been struggling with and fighting for out into the open, but it let the character growth of, not only the unit but every life they’ve touched shine.

We’re almost at the season finale, can you believe it!? And that cliffhanger at the end? We are freaking out. If you haven’t done it yet, make sure you’re flooding social media with #RenewMotherlandFortSalem and #MotherlandFortSalemSeason3. Let’s keep the conversation going in the comments below and don’t forget to follow us @capeandcastle on Twitter to keep up with other shows you love!