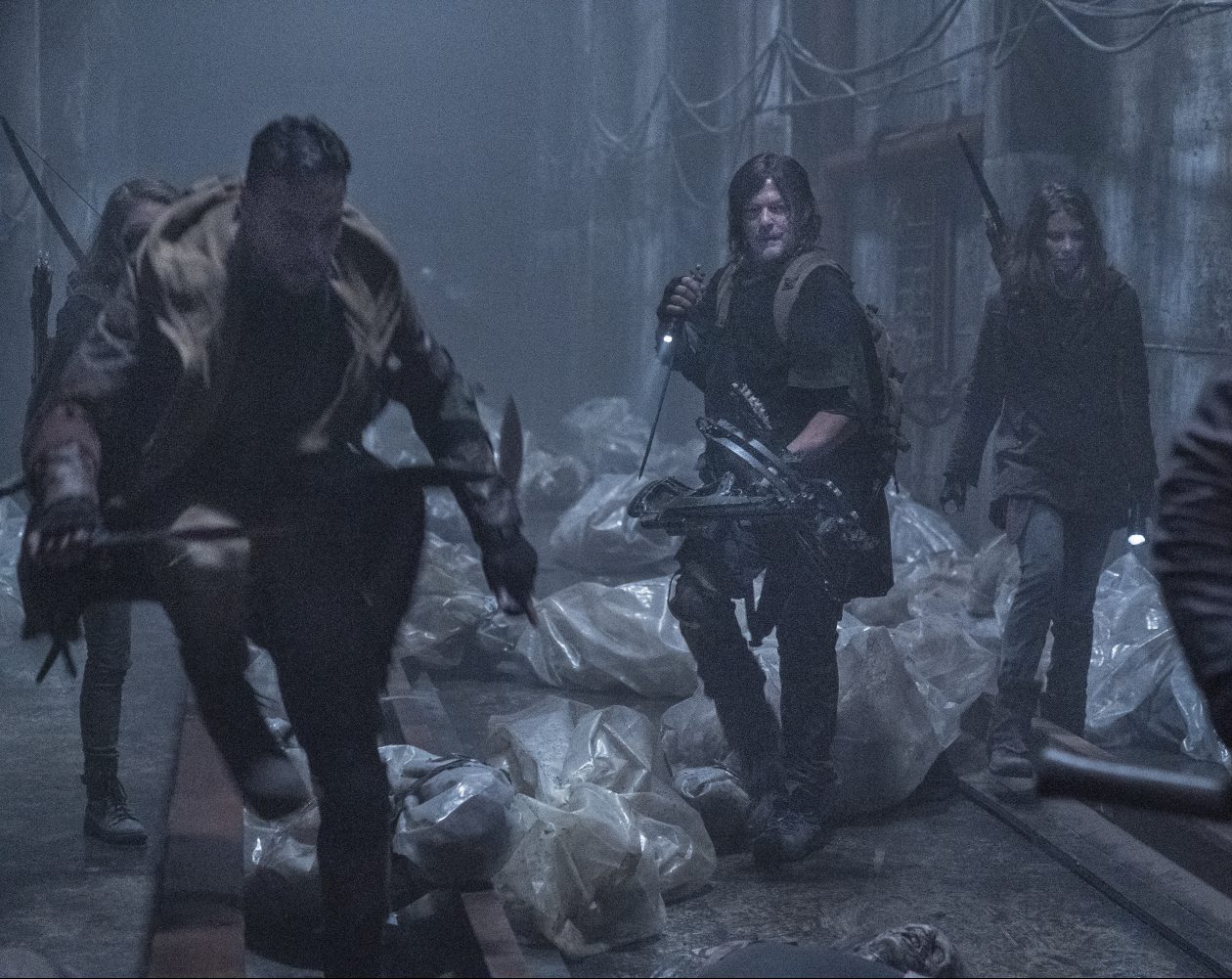 Woot woot! The Walking Dead is back! And it took about two minutes before shit got real. Alexandria was at risk of falling apart if the group didn’t find some food ASAP. But the mission Maggie suggested felt more like a deathtrap. On top of that, they’re forced underground when a wildly intense storm hits and we get a look at just a little of what Maggie and those with her went through before coming back to Alexandria! So keep reading for The Walking Dead 11×01 review!

Honestly, I think things kind of felt a little nostalgic from the beginning of the premiere. A mission to get food supplies going awry as all of the walkers surrounding Daryl and the others rose up. Yep, that sounds like The Walking Dead I’m familiar with. Except it feels like it’s been forever since Maggie has been on a supply run! I’m still just as excited that she’s back as I was when she first made her reappearance. Though she didn’t waste any time getting back into the swing of things as if she never left like the true badass she is.

One thing that just continues to evolve is the way Daryl and Carol work together so seamlessly. They anticipate each other’s moves so well and there’s clearly no one they trust to have their backs more than one another. Watching them do anything together is always incredible and certainly something that keeps me riveted to my screen. Negan being part of the team is another thing that keeps me riveted. But honestly, that’s just because I’m still not used to it. I don’t know if I’m ready to accept him as a good guy and a full part of the team yet. And by the way everyone else was acting, I clearly wasn’t the only one struggling with the concept.

I knew Maggie and Negan weren’t going to be anywhere near ready for the warm and fuzzy feelings. And even though Maggie admitted that she would love nothing more than to kill Negan, it certainly isn’t something I see happening anytime soon. But the man did have a pretty close call with no one stepping forward to help him. Not that I blame them. And I had to laugh at him calling Maggie a dictator. Really? Maybe he should look in a mirror and take a moment to recall the bullshit he’s pulled over the years before daring to call anyone else a dictator. Come on now. And it’s a little silly for Negan to actually expect anyone to treat him like anything remotely close to a leader or to step forward and help him out when he’s in trouble. I don’t know if I can ever forgive him for killing Glenn. So I imagine Maggie can’t either.

I don’t think Maggie’s plan to head to Meridian was a bad one. Dangerous, yes. But after all the shit this group has done over the years, what the hell is a little danger? Or a lot. But still, you get my point. The danger is kind of the name of the game after all this time. Though it was surprising to hear Negan objecting to the journey even though he was a willing participant. Even more surprising was that he was a little bit right. And there was a little more than a little danger that the group was facing. Things went from dangerous to bad to very bad. And then they got worse and stepped right into horrific. You know, as they usually do with this show. I should have expected nothing less.

Negan being a slightly unwilling participant in the journey was the first indication that things weren’t going to go so well. Then two of Maggie’s group members decided they weren’t so down for this mission. Add in a giant mass of walkers and I knew things were not going to go as Maggie planned. But then it seemed like we were going to lose some of the group. Daryl went after Dog and Maggie was literally left hanging for the walkers when Negan returned an earlier favor and refused to help her into the train. There was some seemingly good news in the end. Yumiko and the others make the decision to venture into the Commonwealth instead of escaping as they originally planned.

With this being the final season of The Walking Dead it’s pretty much a guarantee that things are going to get crazier than ever. All the cards are on the table and I don’t think a single character is safe. What did you think of The Walking Dead 11×01? Do you think the group should have been more welcoming to Negan? Or did they treat him better than he deserved? Are Maggie and Daryl going to be able to make it through? Or are they two of the characters who may not make it until the end? Who is going to be left standing when those final credits roll? Find and follow us on Twitter @capeandcastle to share your thoughts on The Walking Dead 11×01 with us! And be sure to check out our site for more articles on all things Disney and beyond!