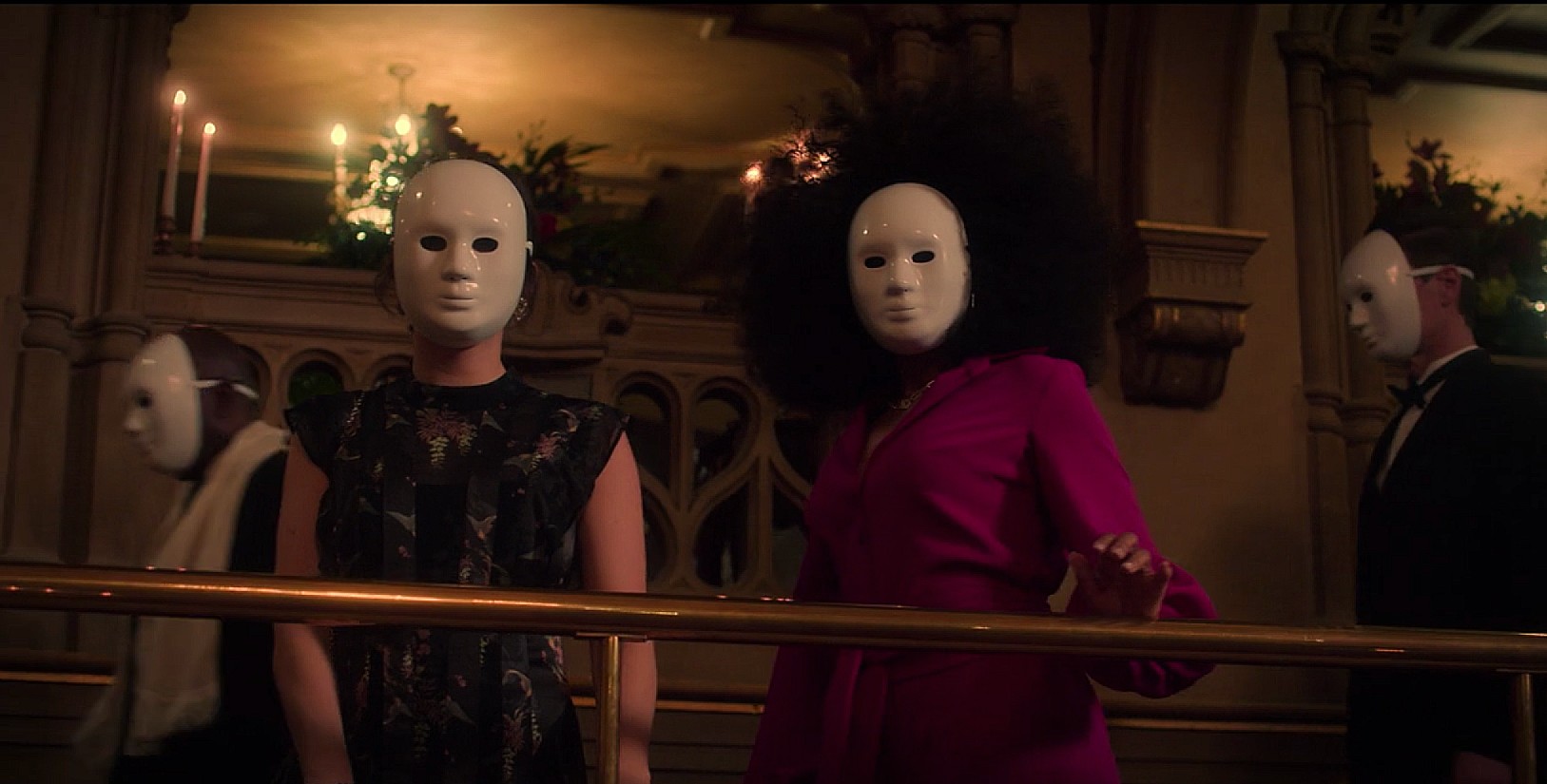 Last week on Motherland: Fort Salem (review here), the first witch-testing center was opened and it didn’t go well. This week, it’s Halloween! We get Christmas in July so why not Halloween. Right? While the unit competes for a shot at getting to communicate with the dead, Scylla and Anacostia attend a Halloween Gala to get closer to the leader of The Camarilla. 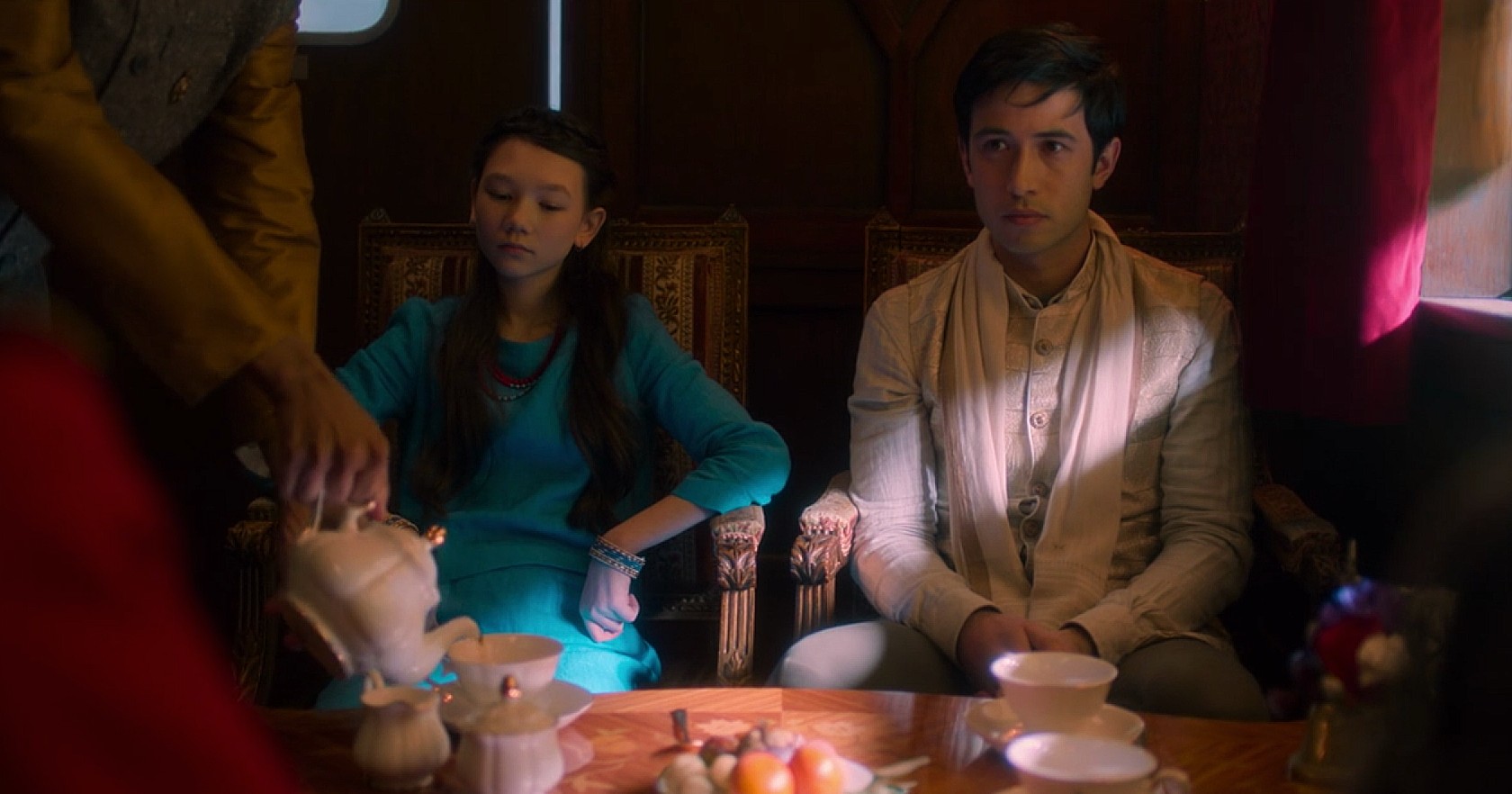 Moving to a New Home

Adil (Tony Giroux) and Khalida (Kylee Brown) are well on their way to their new home when they’re attacked by something dark and deadly that spreads fast. The train went quickly off the rails and we couldn’t stop gasping in horror. What a way to start an episode. Explosive and heartbreaking! Not what we were expecting and certainly crushed us.

While Abigail (Ashley Williams) and Adil were no longer together, his possible death still ached for her. He got her to think differently and reach outside the Bellweather legacy. On top of the loss and nearly dying at the hands of The Camarilla, she was utterly distraught and looking for a fight. We can’t blame her. 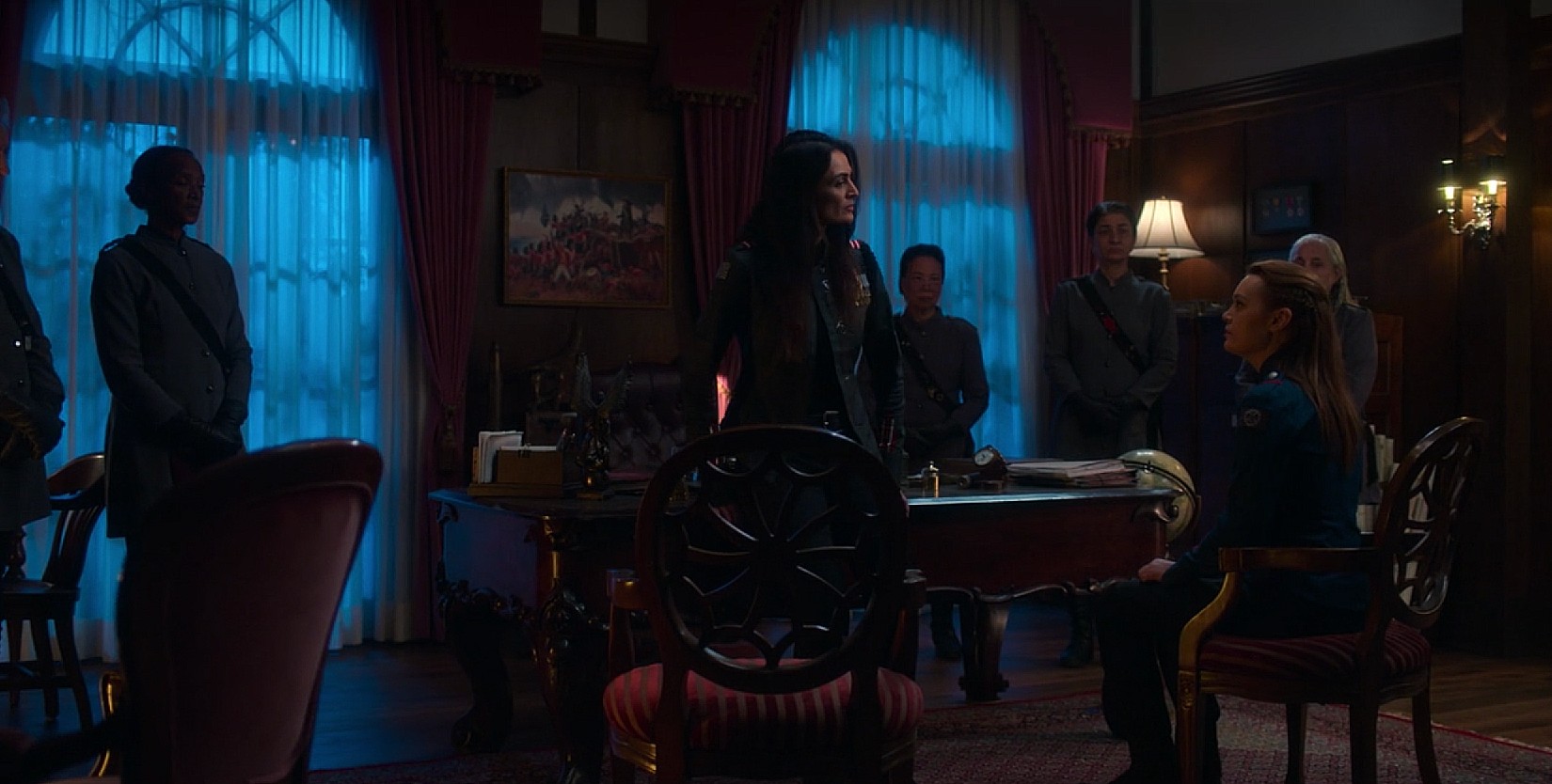 Tally (Jessica Sutton) refused to leave Alder’s (Lyne Renee) office until she got answers about the dreams she was having, but Alder wasn’t having it. In fact, she made sure this last connection between the two of them would be severed for good. While we applaud Tally for confronting the General, it lost her the only connection and lead she had on whatever horrible thing Alder is hiding.

More so, Alder’s efforts with her testing centers were put on hold, halting her efforts to gain witches for the war with The Camarilla. However, Alder did gain an advantage. Petra (Catherine Lough Haggquist) managed to snag The Camarilla’s voice tapes they’d killed and stolen from witches to use against them. 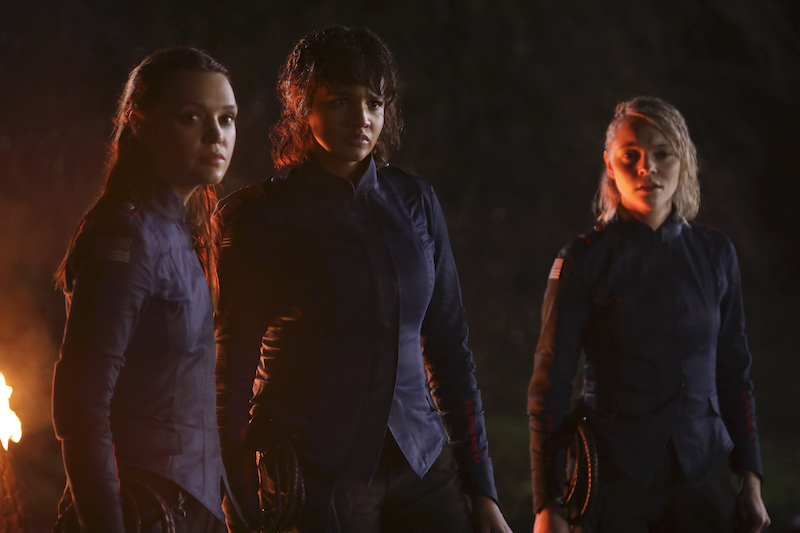 ‘Motherland: Fort Salem’ 2×05 “Briana’s Favorite Pencil” via Nerds and Beyond

On the night of Samhain–Halloween–, the unit takes part in a yearly ritual. Guard a fire which represents a lost regiment and they’ll get to talk to the ghost of their choosing. M (Ess Hodlmoser) guided them in the exercise and they succeeded when Raelle (Taylor Hickson) swept in with some badass healing and combat, leading the unit to victory. She took the new powers she’s been developing and whooped some major ghosty butt.

The darkest part of the episode came when the unit got to talk to the spirits of their choosing and faced unexpected personal demons. Tally learned the truth about the dreams she had and that the witches that supposedly sacrificed themselves as martyrs in that church Alder had trapped in were spelled to kill themselves. Abby, with Sharvelle’s help, came to terms with her feelings of failure. Unfortunately, Raelle didn’t get to meet her ghost. Her ghost is still alive. Her ghost is her mom. We’re really antsy for her to discover that her mother is alive and can’t imagine what it’ll mean. We’re as excited for Raelle to reunite with her mom as much as Scylla (Amalia Holm).

Worth Dying For, Worth Living For

Scylla struggled with her place among The Spree as more witches leave the ranks and her position is questioned. Raelle’s mom reminded her that some things are harder than others. Scylla wasn’t in the wrong to find a different method other than sacrificing people when it came to fighting for witches’ rights and lives. As more gets revealed about The Spree, we keep finding that this group isn’t truly evil but wanting to prove that the Army is dangerous and that it takes away the rights of the witches that enlist. They only want to free them. Scylla has obviously realized that the sacrifices she’s made weren’t for the cause and it was time to redirect that will at the enemy.

While last week’s ambush at the witch testing center was confirmed to be The Camarilla, Raelle was still spinning from seeing Scylla out there. So were we. Honestly, we had hoped to see them reunite last week or this week. Now, Scylla and Anacostia (Demetria McKinney) dove deeper undercover by attending a Camarilla gala on Halloween, in search of the leader of the group.

Creepy white masks and threatening to kill a child that was barely considered a witch. Scylla stepped in quickly while Anacostia worked quickly to cut the power. Both scenes combined were a wicked show of these rebellious ladies kicking some major ass. We continue to be impressed by Scylla and Anacostia’s team-up. They both care so much about the future of witches and they’ve been the only ones daring enough to go directly after The Camarilla. Though clever, it’s also dangerous, but we have faith in these two. 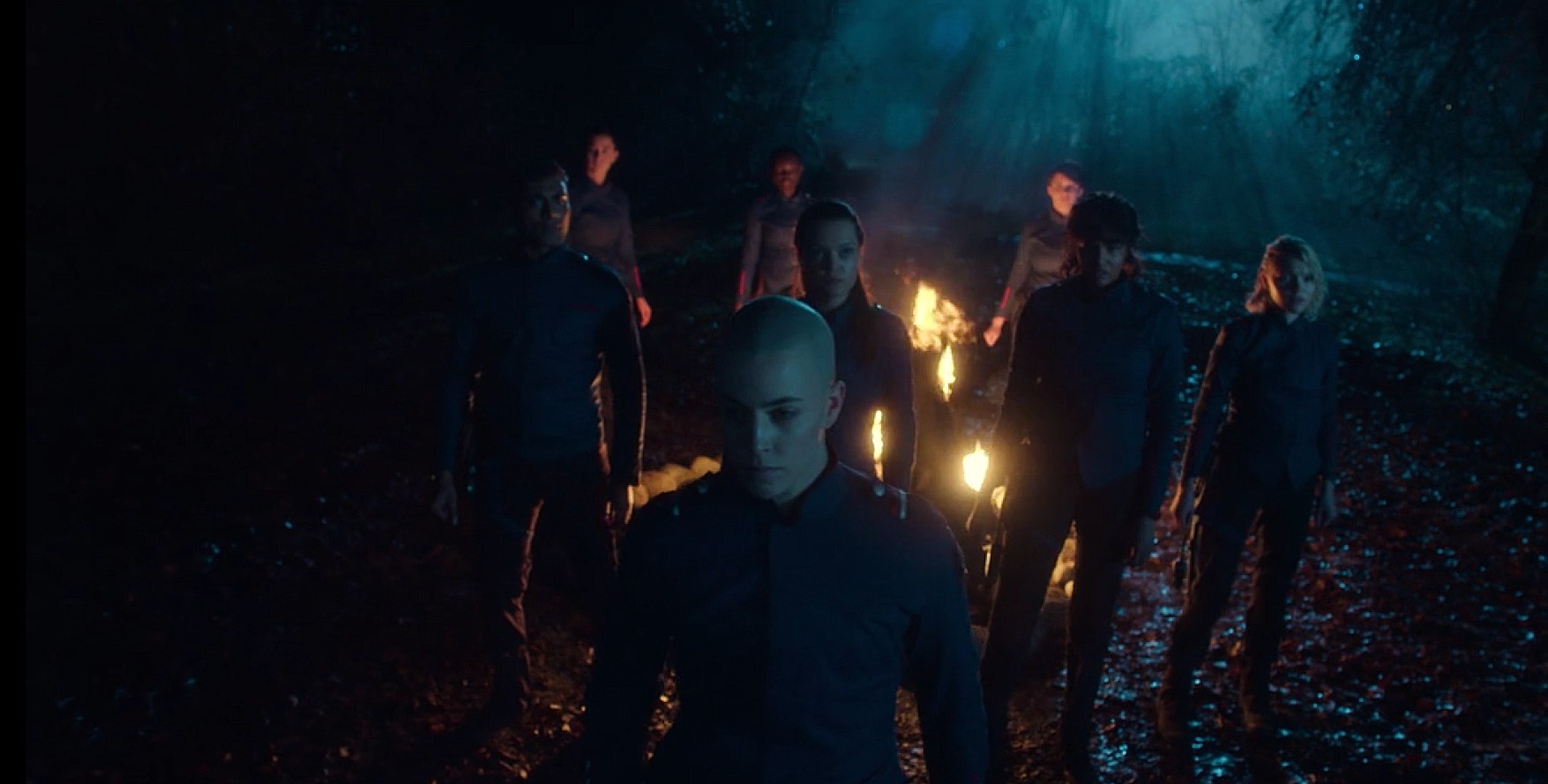 That ritual to protect the fire until the last stroke of midnight was definitely our favorite. Dark, mystical, and incredible. We were blown away. From the Unit facing off with the ghost riders to getting to communicate with the dead and gaining much-needed reminders. A true show of teamwork, friendship, and power. This was an epic way to spend Halloween, even if it is early.

What did you think of the episode? Let’s chat about it in the comments below and don’t forget to follow us @capeandcastle on Twitter!