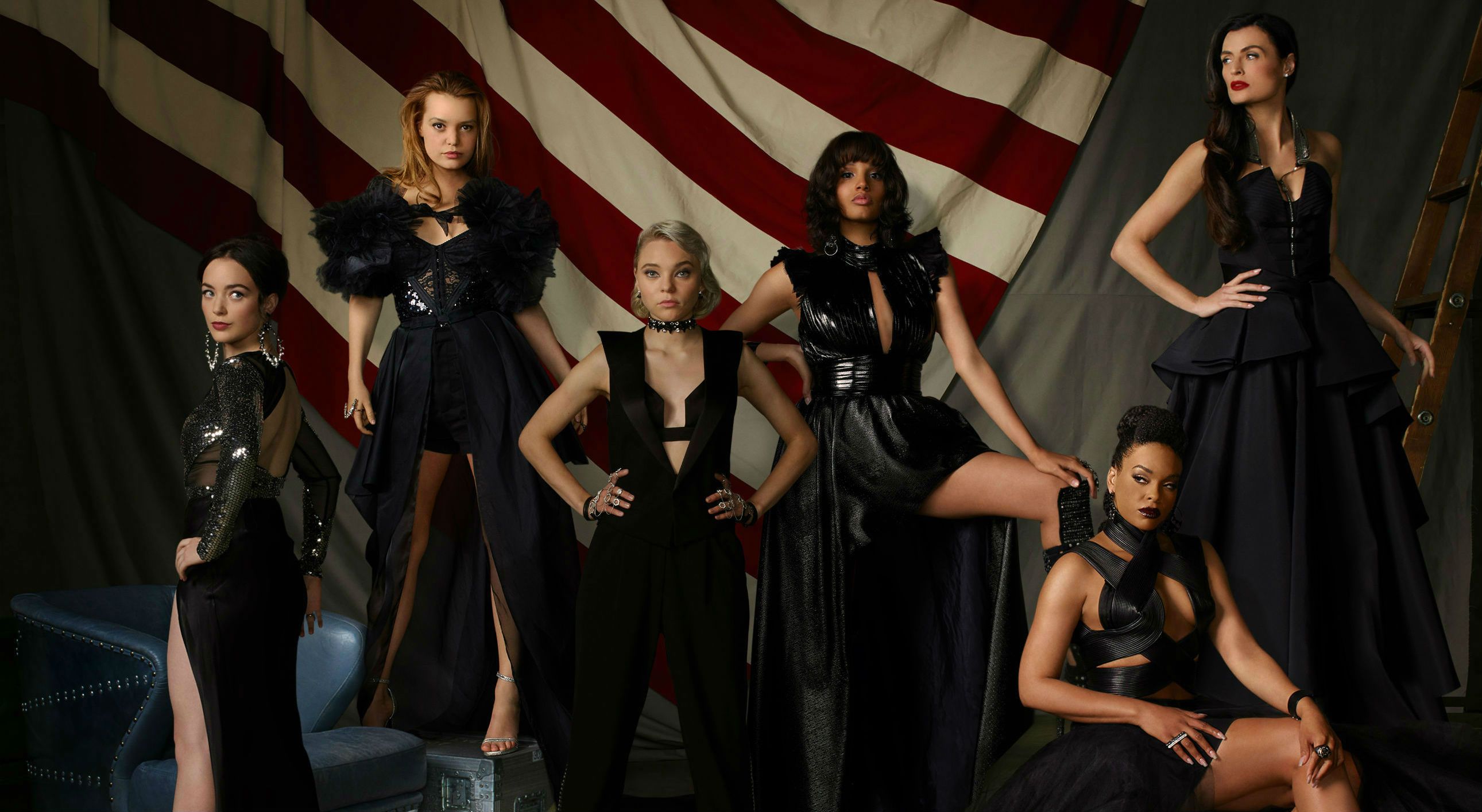 You’ve got to be just as excited as me about Motherland: Fort Salem 2×01. In all honesty, I’ve been pretty needy for it and showing it to everyone I know. It throws me back to when I began Supernatural when it first started. The season 2 premiere did not disappoint! Reunions were had, emotions swelled, and suspicion was everywhere as our witches were on the verge of war.

Right away, the MFS premiere swept us into something witchy. At church, the Vice President’s daughter, part of the choir. steps out for a solo in front of the congregation and the stained-glass windows behind her melt away as she delivered a powerful song. The reveal that she was a witch shocked everyone. Many fled while others began to pray. Not only was this a subtle but ominous start but it also pressed the boundaries of witchcraft versus the sacredness of a holy place.

The reveal of new witches gave Alder (Lyne Renee) a chance to gather new power, but with them in the public spotlight, they’re in danger. Not going to lie, I’m not sure Alder should be in charge of them. Raelle (Taylor Hickson) seemed to be in the same boat. 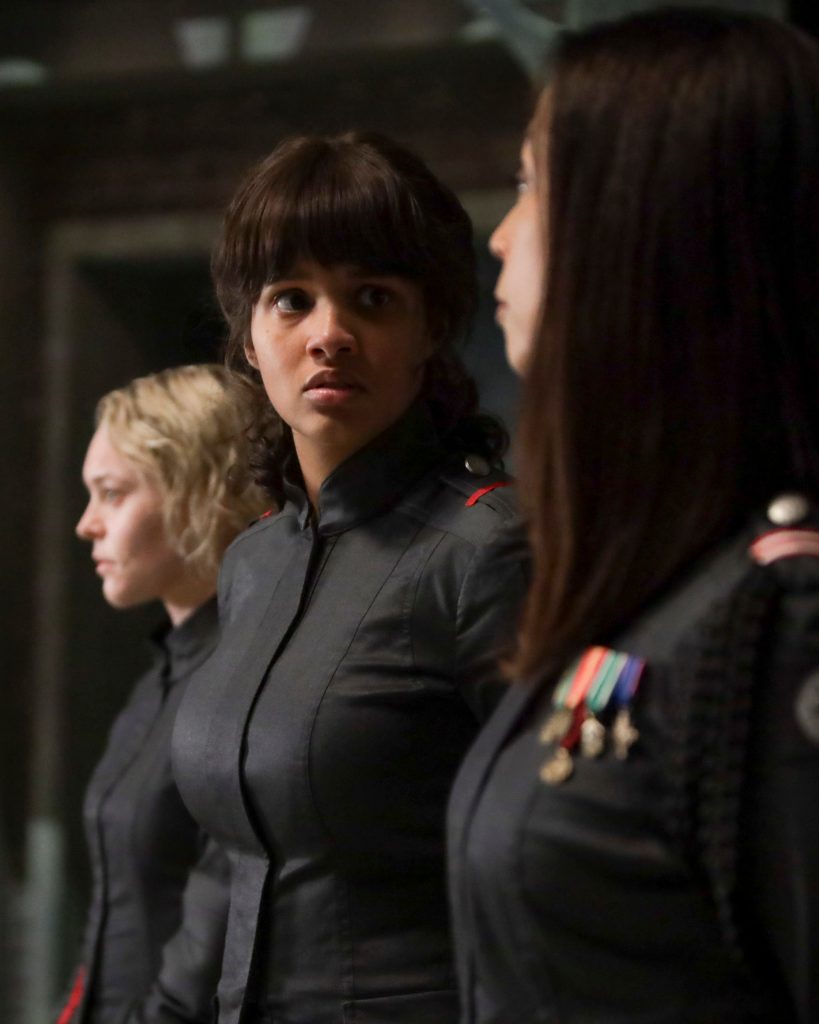 Raelle and Abigail were still coming to terms with the miracle of surviving and the magic they wielded. Still in shock and awe, they debated telling Alder about it.  Powerful enough that when they were found by fellow witches they were chained in custody. It got stranger and I was getting uber suspicious. Just because The Camarilla has returned doesn’t mean I’ve forgotten about what Alder did to the President, controlling her mind-an illegal act. All in all, The Spree and The Camarilla are the enemies outside the walls of Fort Salem, but Alder may be becoming one inside of them. Anybody else feeling that paranoid?

A Biddy’s Life for Me

It was finally time for Tally (Jessica Sutton) to deal with becoming a Biddy and also with what happened to Raelle and Abigail (Ashley Nicole Williams). Part of that came with consoling Adil as they dealt with thinking their friends were dead. But Tally was put in a unique position. With a bond unlike any other with Alder, she sacrificed so much including being her own person. Still, she was offered a chance to return to her former self and took it instantly upon hearing that Raelle and Abby were alive. I would, too! But the thought that she considered saying no in light of having nothing else was saddening.

The downside was that being a Biddy, even for a short period, left Tally altered. She even experienced an old memory of Alder’s that left her screaming and me crawling out of my skin. This closeness is concerning since it could possibly tear Tally away from Abby and Raelle and they’re at their most powerful together, but it’s certainly a possible advantage for the three of them to keep an eye on their leader.

But, after all that our ladies have sacrificed and gone through, they’re going to war college! From the look of things, they may not have time to delve more into what Alder’s motives may be. The ladies may be in trouble. With Tally under Alder’s thumb and Raelle and Abby revealing that they were the huge power burst at the end, they could be in danger, 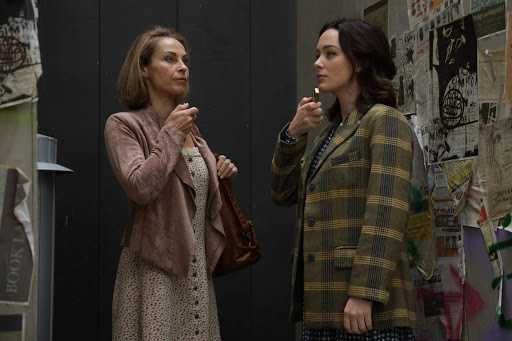 I’m still shocked that RAelle’s mother is alive, not to mention one of the leaders of The Spree. But the surprises didn’t stop there. Scylla (Amalia Holmes) learned that the attack on Abigail’s sister’s wedding wasn’t The Spree. Neither was the soccer stadium attack. It was the Camarilla. Discovering The Spree was just as much on the defense as Fort Salem got me wondering. Are The Spree really evil? They may just witches that are ready to break free of their old covens or break free of an obligation to fight for a cause they didn’t ask for.

The Spree aren’t harmless, but more information is definitely needed because I’m not so sure they’re actually the enemy. They came off more as protesters looking to prove a point and with the rally at the very end, it’s a point well made. With the flashback of The Spree leaders being murdered after sharing that they’d found more witches it’s as if they were looking to free them, help them even. There was a relief felt in that joyous moment right before they died. There is a debate to be had.

There were so many breathless moments in the MFS premiere. But the winner goes Raelle and Abby return to Fort Salem that topped the episode. The reunion of not only our three girls but Abby and Adil was stupendously emotional and wonderful. And the magic and music have only gotten better. Absolutely gorgeous and

Finding out that The Spree wasn’t behind all of the attacks in season 1 came in a really close second. My jaw dropped. I  wonder what this means for them since they actually seem to be on the run from The Camarilla. But, with Anacostia using Scylla to spy on The Spree, maybe we can hope that Anacostia creates and alliance between Fort Salem and The Spree. That would be pretty awesome and a good way to reunite Raelle with not only her mom but Scylla, too. We’ve been missing those two together.

What did you think of Motherland: Fort Salem 2×01? Let’s chat in the comments below and don’t forget to follow @capeandcastle on Twitter to keep up other binge-worthy obsessions that you love! Check out our site for more content as well!