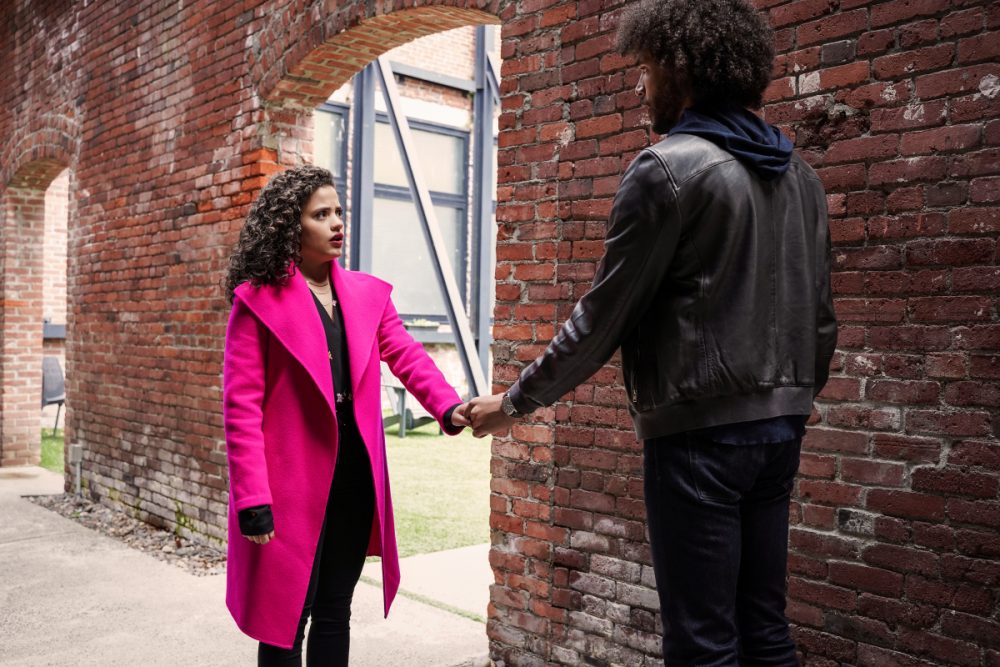 This week’s ‘Charmed’ did not quite live up to last week’s episode, getting sidelined with an Abigael storyline that took all the wind out of its sails. The parts focusing on the Whispering Evil were fascinating, though, and made me excited to see the conclusion of the storyline. Let’s get right into our ‘Charmed’ 3×16 review!

While Macy and Maggie deal with the impending apocalypse, Mel is nesting at home. She has a mild breakdown over the many pieces of her crib. As someone who has had more than one crying fit over Ikea furniture without the added hormones of pregnancy, I could fully relate.

Unfortunately, she has more nonsense to deal with this week. Abigael and her newfound sister Waverly arrive, needing a place to stay. Abigael kidnapped Waverly, and a demon tracked them to Abigael’s apartment. Mel lets them come inside, proving she is nicer than I am. From there, Mel has to constantly referee the endless sniping between Abigael and Waverly over whether their mother was terrible (she was) and if she preferred Waverly to Abigael (she did).

Naturally, I have a couple issues with this storyline. First, we absolutely did not need another member of the Jameson-Caine family. Over the course of three seasons, we have met so many members of this family. Meanwhile, we have met barely any of the Charmed Ones’ extended family or even really mentioned them. I could not have cared less about Waverly and Abigael’s relationship. It once again brought the storyline to a grinding halt. I won’t call it filler because it is technically character development. However, these are characters who just do not need to be developed. 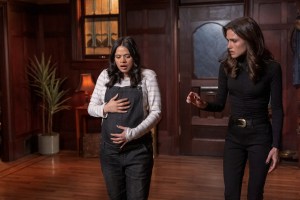 Once Abigael sees that Mel is pregnant, she immediately starts needling her about if she is her partner in the future. This felt so distasteful to me after all the Mel/Ruby development last week. It felt like twelve steps backward to tease this Abimel relationship after we saw Mel and Ruby really deepening their connection with each other.

Abigael tells Mel she needed to find Waverly in order to get the Blade of Clarity, so she can restore Macy’s fire power. Mel confides she is having some major insecurities over becoming a mother. Abigael tries to tell her she knows what bad mothers look like, and Mel could never be a bad mom. I understand why Abigael is the one having this conversation. I also think it could have been a great moment between Mel and Macy, since Macy grew up without her mother. Yet again, a moment that could have been used for a Mel/Macy connection is given to Abigael/Mel instead.

Waverly lures the demon to the manor. It reveals Francesca is the one who paid him to find Waverly’s daughter. Something about powers and eternal beauty. The demon throws a knife at Mel’s stomach, but she is once again able to freeze time. Waverly vanquishes the demon.

A while later, Mel sits with the sisters and encourages them to not let their mother win. It seems like the sisters might be on their way to finding peace with each other. I wish I could bring myself to care. At this point, the presence of anyone with the last name Jameson or Caine is exhausting. The important part of this storyline this week is that Mel’s time witch powers are restored.

“I Want Someone Who Makes Me Feel Safe”

Jordan shows up at the manor as Maggie and Macy are getting ready to leave for Safe Space. He says he feels like a whole new man. He and Maggie make eyes at each other. It’s super adorable. As he hears about what has been happening, he jokes he should have taken a longer vacation.

At Safe Space, they find out Corporate stopped paying their utilities to try to force them out of the building. Swan rushes over to Macy, since she owns Safe Space and should care about this. Macy brushes her off, saying she has bigger things to worry about. I have such a problem with the way they have handled the Macy as CEO storyline because if there is one thing Dr. Macy Vaughn is not, it’s incompetent. She would know everything that is going on. She would have at least set up a login to the security camera system, which we also see later she has not. It is infuriating the way the writers have squandered the ability to show Macy as a total boss. Jordan offers to look over the contract and see if Corporate is in breach of contract while Macy and Maggie keep looking for clues.

Maggie finds a faded page on the murderboard and then finds its current-day counterpart. It tells of an African myth called the kunong’ona mabaya – The Whispering Evil. That’s the creature that has been infecting everyone. Meanwhile, acy has also scienced her way into a vaccine for the allergy. She and Maggie drink it quickly, but don’t know yet if it worked. Hearing a scream from upstairs, they rush back up to see multiple people, including Swan, passed out. Jordan comes stumbling out, saying he just heard whispering and clicking. He tells Maggie he saw Antonio trying to break into the switch room, so Maggie goes to the college to find him.

While working on their internship, Maggie doses Antonio’s latte with truth serum and asks what he was doing at Safe Space. He says he was just looking for her. He denies trying to break into a locked room, but he confirms seeing Jordan. Antonio says Jordan gave him a look, like “step off my territory.” Antonio keeps talking about their chemistry. Maggie says she doesn’t believe him, but Antonio says she doesn’t want to see it. Or maybe they really don’t have any chemistry, which is what I believe. She asks if he is the Whispering Evil, and he denies it. He’s clearly very confused.

Maggie calls Harry for help. While they’re waiting for the “magical detox” he brings to take effect, Harry asks why she gave him so much truth serum. Maggie admits she didn’t like what he was saying. She tells Harry she doesn’t want someone who frustrates her. She wants someone who makes her feel safe. As proof that Harry is the number one Joggie shipper, he tells her to have a “truthful conversation with Mr. Chase.”

“It’s Only One Part Of You”

This week, Harry’s mortality side effects are constant nightmares. Macy worries because he’s avoiding her. While Macy and Maggie are searching for the Whispering Evil, Jordan shows Macy security camera footage of Harry breaking into the Wicca store around the time of the attack. Macy finds him and asks if he is the Whispering Evil. She doesn’t bother to use truth serum, just believing he will be honest with her.

Harry tells her he was breaking in to get an ingredient for a dreamless sleep potion. He has been having nightmares about James Westwell’s life. What concerns him the most, though, is that James feels like him. He worries he is going to turn back into James. Macy reminds him she knows what it’s like to fear a part of herself, but that’s only one part of who he is. She also reminds him she’ll always be there for him. It’s a conversation they’ve had a couple of times, but it’s one that always makes me smile. I just love to see them being supportive of each other.

After Harry returns from helping Maggie, an infected Swan bludgeons Harry, and he gets to the end of the nightmare. Sure enough, it’s the moment of James Westwell’s death. He was standing on the street corner, shamelessly flirting with a random woman, like the cad we knew he was. However, the woman’s daughter nearly got hit by a car, going after a loose ball. James shoved her out of the way and got hit by the car instead. He may have been a misogynistic womanizer, but he also saved children, so he wasn’t all bad.

“It’s Been You This Whole Time”

Macy and Jordan look around Safe Space together. He keeps mentioning how weird it is that he never saw a thing. Jordan pulls up the security camera footage, which is what leads her to Harry. He was also the one to put Maggie on Antonio’s trail. Macy doses Jordan with truth serum and asks if he’s the Whispering Evil, but he vehemently denies it. He also drops that his middle name is Horatio, which I love.

Swan continues to get progressively worse. Her eyes are bleeding like Macy’s were in the future. Macy yells at her to fight this, but she passes out. She realizes this is the start of the mind virus outbreak and Swan is Patient Zero. Macy starts putting up barrier spells to keep anyone from getting out, as Jordan asks her why this monster has her so rattled. She thinks about what she saw in the future, but she doesn’t tell Jordan about it. She just says they need to contain this one.

There are several infected, including a truly terrifying clown who tries to knock out Jordan, but Macy saves the day. She studies his infection and realizes this is what Swan will become. Sure enough, Swan is up and walking around. Macy uses her telekinesis to push her back, yelling that she knows Swan is still in there. Macy drops her powers and Swan lunges at her. Fortunately, Harry regains consciousness and uses his dreamless sleep powder to knock Swan out.

Jordan runs out the doors of Safe Space just as Maggie finds him. She tells him she has so much to say, but the timing has never been right. As she reaches out for his hand and we all think we’re about to finally get that love confession, she reads his mind and sees that Jordan is the Whispering Evil. They’ve been laying out the clues all episode, but it was still a heartbreaking reveal.

In a great heel turn, Jordan’s entire demeanor changes. Jordan Donica nailed this, and it’s why I’m actually excited for this. Maggie tries to use her powers, but they don’t work. Macy and Harry run outside as Jordan delivers the necessary villain exposition of his plan. He’s been redirecting them all episode to give time for his “soldiers” to take effect. When Jordan was placed in the Tomb of Chaos, the Whispering Evil just hitched a ride back out with him. His army comes out to help, but the others run back inside.

Maggie realizes if she could touch Jordan, that means the vaccine worked, so she and Macy can touch again. They join hands to form a containment spell and get the infected in a forcefield. Macy and Harry hug each other. I once again smile at how relieved they look to be in each other’s arms. Maggie says they have to stop Jordan, no matter what it takes. We watch as Jordan walks out into the completely uninfected and vulnerable world.

With only two episodes left this season, the showdown with the Whispering Evil is set up to be the final battle. Now that Jordan is confirmed to be the human host, the stakes are higher than ever. How are you feeling after this week’s episode? Find us on Twitter @capeandcastle to share your ‘Charmed’ 3×16 thoughts. Be sure to check out our site for more content!