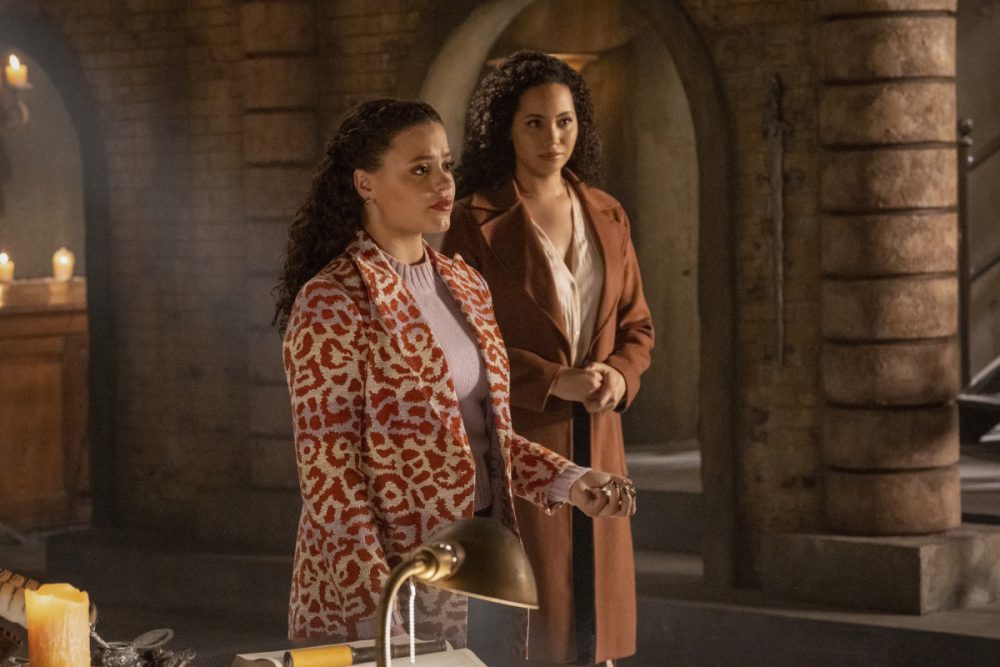 This week’s ‘Charmed’ takes us into the future and things look bleak for the Vera-Vaughn sisters. “Schrodinger’s Future” is my favorite episode of the season, balancing the dystopian future with some great Mel/Ruby development, and a genuinely funny Harry/Celeste storyline. Keep reading for my ‘Charmed’ 3×15 review!

After the events of last week, Mel is focused on staying healthy throughout her newfound pregnancy, eating nothing but healthy snacks and attempting some meditation.

Also on a health kick, Harry and Macy are going for morning runs together. We got some lighthearted banter between them, leading to Macy racing Harry back to the house for a fresh pastry from Paris. After so much angst between them this season, it’s nice to see them getting to be cute together. Those moments where they are just smiling and laughing together are why I love them so much as a couple.

Maggie has been frantically trying to get a vision of the future. Finally, she gets one and it doesn’t seem great. She tells her sisters they have to go to the future, but Mel points out she can’t just take her baby back to the future after Future Mel went to so much effort to bring it to the past. Macy agrees and says she and Maggie will just have to go themselves. And we’ll get to the events of the future in a bit, but let’s focus on those characters who stay in the present first.

While Macy and Maggie use Celeste’s watch to travel to the future, Mel brews a temporal tea potion to counter any rapid aging effects the sisters might have upon their return. When Ruby stops by with the stuff from Mel’s office and a pregnancy care package, she wants to help Mel with the potion. Mel tries to respect Ruby’s boundaries over not wanting to do magic, but Ruby wholeheartedly wants to help.

They spend a lot of the episode talking about Ruby’s feelings towards magic, as well as the fact that Ruby clearly wants a future with Mel. They also talk about their feelings about possibly raising a child together. This is the most they have developed the Mel/Ruby relationship all season. We get a lot of depth from Ruby. We see that she is an incredibly talented witch when she just whips up an acceleration potion. Mel tries to push Ruby away a couple of times, but Ruby stands her ground and shows she can be just as stubborn as Mel. 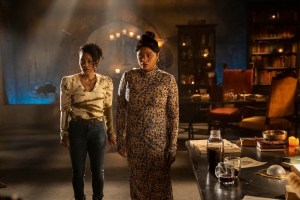 When Ruby overheats from the acceleration potion, Mel realizes they can touch again. Since the couple didn’t get their moment of intimacy before, it’s nice to see them get to hug and cuddle. By the end of the episode, Ruby assures Mel she is there for her no matter what, even if that means magic and a baby. I have always liked the idea of the Mel/Ruby relationship, but this episode helped to show how they can work as a couple. I honestly wish we had gotten the I Love Yous at the end of this episode because I think they would have been more earned here than they were at the end of 3×12. I’m keeping my fingers crossed Bethany Brown might be a series regular next season.

Celeste has apparently moved into the manor to monitor Harry’s side effects. She lectures him for exerting himself with his morning run and says she is just trying to protect him. Harry argues that he feels fine as he starts giggling about Celeste’s face. Just as Celeste prepares to send Maggie and Macy into the future, Harry starts drawing crayon pictures and twirling around in a circle. Since he used Georgie’s soul, he’s regressing in maturity.

I still have so many questions about the soul situation because if Harry took his grandson’s soul from him without a second thought, that seems really shady of him. However, Rupert Evans twirling around and giggling like a child had me dying with laughter. Combine that with the look on Macy’s face as she asked Celeste what was going on, and I lost it. If we get no other bloopers this season, I just want them from this episode.

Harry starts out around the same age as Georgie. He’s pouting that he just wants to talk to Macy. He steals one of the earbugs they’re using for communication to ask Macy if there are spaceships in the future. Macy has so much more patience with him than I would as she tells him to just listen to Celeste right now.

He quickly gets to the teenage years as Celeste loses communication with Macy in the future. Harry snarks that Celeste doesn’t even know how to turn on the calibration machine to test the earbugs. She tries to tell him she does, but she ends up needing him to show her how to work the machine. Kate Burton and Rupert Evans both tend to be more dramatic actors, so it was refreshing to see them go all out with the comedy. They have such great chemistry with each other.

As Harry approaches the 18-21 age range, Celeste starts to cough, citing asthma and stress. Harry worries if she is okay, and she just asks if she has his cooperation now. Harry says he’s mentally old enough now that he can feel bad for the trouble he’s caused. Rupert Evans does great with changing his physical presence and voice patterns as he goes through each age range. Just like last week, he gets to do some fun comedic stuff, but this storyline also shows how far Celeste and Harry have come. They’ve had a really great arc together, despite the limited appearances she’s made. 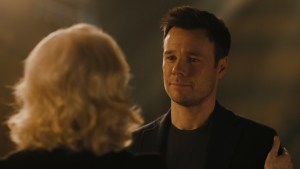 At the end of the episode, Celeste tries to sneak out of the Command Center, but Harry finds her. She says he may have been right when he suggested she was just trying to ease her own conscience over the horrible things she did to him. She doesn’t need to hover over him while he’s becoming mortal. Celeste tells Harry she will be there for him if he needs her, but not if he doesn’t. She steps through the portal for what I hope is not the final time. Kate Burton brings so much to any role she plays, and Celeste has been a delight.

“We Changed The Future Once”

With the help of Celeste’s watch, Maggie and Macy travel five years into the future. To say the world has become a hellscape would be putting it mildly. It’s kind of like A Quiet Place meets some generic dystopian video game. Maggie freaks out that her worst fears are coming true. Macy realizes since they don’t have their powers in the future, they might not have the allergy. She rushes forward to hug her sister. It was so nice to see Macy instigate that hug. Macy’s emotional intelligence has increased so much over the series. She could see that her sister was upset and she just wanted to comfort her. 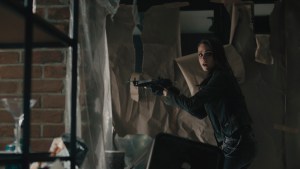 Shortly after, an alarm of some type goes off and zaps the sisters. Abigael materializes out of smoke in front of them. She provides the exposition that Maggie is dead in this timeline. Abigael had to kill her because she got infected by what Mel calls the “Whispering Evil.” It hijacks your brain and then turns you into the worst part of you. Abigael was a part of Mel’s resistance, helping to guard Vera Manor while Mel tried to find a cure. Then the “Infected” overran the house and Mel went missing. They hear a clicking noise as Abigael tells them to hide. Whoever or whatever it is catches up to Abigael and quickly kills her with a fireball.

The sisters run to the house, trying to get in touch with Harry and Celeste, but Abigael’s trap fried their earbuds. They get to the manor, which is completely dilapidated now. Fortunately, Mel left them an entire murderboard of clues in the attic. They see a Tomb of Chaos symbol in Mel’s notes and remember the Perfecti warned them of a greater evil. Looking through the notes on the board, they realize this all starts three weeks from their present, just in time for the season finale. Unfortunately, they have bigger problems because Celeste’s watch got broken when Maggie got blasted by Abigael’s trap. Macy manages to locate her spare earbug parts and builds a new one to contact Celeste.

Celeste has a spare piece for the watch. She first suggests that she’ll hide the piece in the Command Center. If they can’t get back there to get that piece, they will be stuck in the future forever. They run back to Safe Space, shrinking the murderboard to take with them. Fortunately, they are able to get inside the Command Center. However, the clicking figure that killed Abigael is in there with them as well. With some awesome braids and an overall look that remind me a lot of season one’s Jada, the figure is revealed to be an infected Macy who is hellbent on killing them.

It was fairly obvious it was going to be Macy since we know Maggie is dead and Mel has been leading the resistance. I was slightly disappointed with the reveal because Macy tends to be the sister who goes evil, between this and the Source. Regardless, I know Madeleine Mantock is going to rock whatever storyline she is given, so I’m on board with seeing how Macy becomes The Evil this time.

The sisters run to a nearby mall as they try to evade Evil Macy. Celeste gives Harry the watch piece and tells him to run to the mall and hide it. Maggie worries Harry’s powers are going to fritz out, but Macy has faith in him. He runs faster than ever and finds a tailor shop to hide the piece. He puts it behind a brick wall. Either Maggie finds the sharpest pair of fabric scissors in existence or those builders used the softest mortar in the world because Maggie is able to dig out the brick and get the watch piece. Just before Evil Macy can fireball them, the sisters fix the watch and go back to the present. They land on the floor, rapidly aging to their 60s or 70s as Mel pours them some temporal tea.

Back at home a while later, the sisters examine the murder board. Maggie laments the fact she doesn’t get to grow old, while Macy points out she becomes a monster. Mel reminds them the last time she went to the future, she saw her own headstone. They promise to always make time for each other, no matter what changes. Mel reveals her lack of an allergy to the sisters and says she thinks her baby might be affecting the allergy. It’s a nice sister moment to give us some hope for the future because the snarling, clicking figure the episode ends on suggests the Whispering Evil is already there.

This episode has me so anxious for the final arc of the season. I’m very worried for Harry and Jordan in the future, since we don’t know what has become of them. I have questions and am genuinely excited for the answers, which is all I could ask of the show. How are you feeling after this episode? What are your theories on who the figure was at the end of the episode? Find us on Twitter @capeandcastle to share your ‘Charmed’ 3×15 thoughts. Be sure to check out our site for more content!