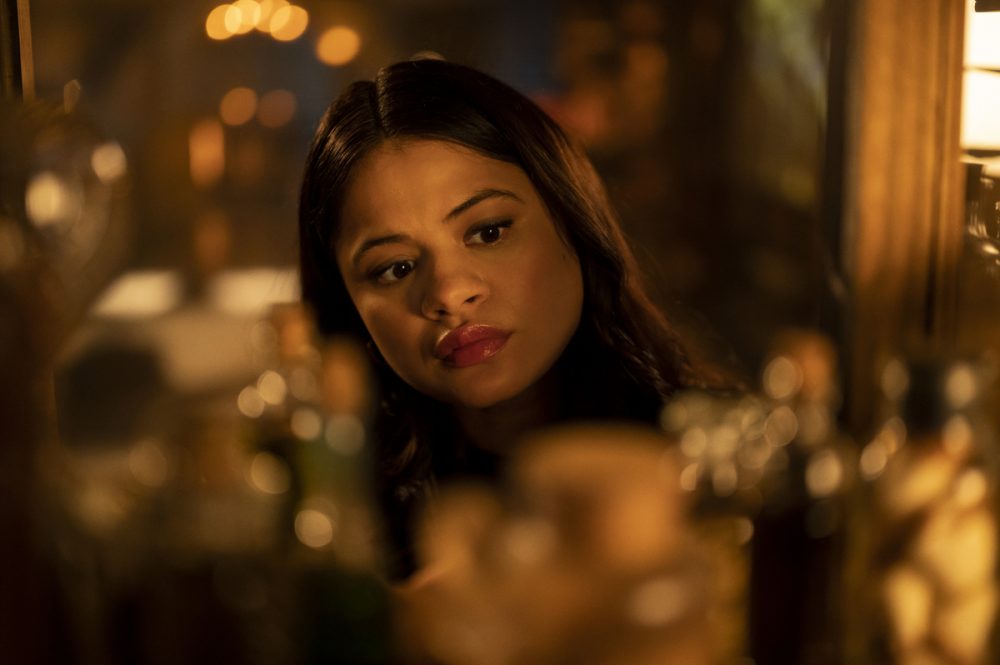 This week’s Charmed picks up shortly after the last episode. We get a lot of focus on the Perfecti along with the side effects of Harry’s mortality journey for an overall strong episode. Keep reading for our ‘Charmed’ 3×14 review!

Maggie is trying to get a premonition of where the Perfecti might be. Mel is mixing Elder Magic with brujeria to make increased protection candles. Macy is using science to find a way to activate the memory mirror and look at the Perfecti’s memories. It’s the best use of each of their individual skills, which is something that has been sorely lacking this entire season. Mel heads to the Command Center for orichalcum to test one of Macy’s theories because none of them can quite believe they might have defeated the Perfecti. 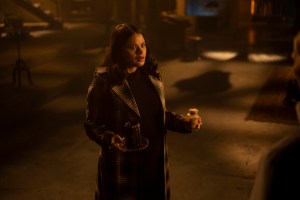 The Perfecti find Mel in the Command Center. They use their creepy harmonizing and tell her that if the Charmed Ones don’t submit to the Tomb by midnight, her head will explode. Shortly thereafter, Mel wakes up back in Macy’s bed. They are putting her under a Sleeping Beauty potion while Maggie and Macy try to save her. Fortunately, Nurse Ruby is there to look over her.

“The Super Weapon of the Magical World”

Harry has been with Celeste trying to strip his powers, somewhat hesitantly on her part. He tries to remind her this is his choice. I thought Celeste was dead after she stripped her immortality, so I’m thrilled to see her back. I’m just mad they didn’t go to her for help with the Perfecti from the beginning. As soon as he hears Mel is in trouble, he heads home. When Celeste argues he’s a liability with his fading powers, he tells her to come along.

Celeste jumps straight to action once they’re in the Command Center. Through an activation spell, they see the ancient Charmed Ones defeat the Perfecti with a golem. Maggie and Macy immediately ask how to make a golem. Celeste argues it would be like hotwiring a nuclear bomb, but Macy says it’s their only hope.

Celeste says they need two things: lots of mud and a demonic password written on vellum. Harry thinks Fenric the Vile would have the password, but he won’t give it to a witch. Celeste says they need witch and demon cooperation for the spell to work, so she pulls out supercharged glamour powder and suggests one of them become Abigael. At Macy’s “hell no” look, Maggie volunteers.

Macy, Celeste, and Harry start molding the golem out of mud in their shed. Unfortunately, Harry’s body is being overrun with cortisol and adrenaline, so he is flipping out. He worries about every little thing, including but not limited to microbes in the dirt, rusty nails, and rats. He is sweaty and shaking, just terrified. Just as Sarah Jeffery has gotten to do different things with Maggie this season, Rupert Evans has gotten to do some fun “deranged Harry” work that shows off his range.

Macy argues with Celeste and tells her to pull the plug on whatever she’s done to Harry. Celeste says she is a slow learner. She dated both Cassanova and Errol Flynn. What I want to know is where is the spinoff series about Celeste’s early life because it sounds wild. Regardless, she will not disrespect Harry’s free will again. Considering the first time we met Celeste, she was putting the Charmed Ones into a nightmare spell without their consent, she has come a long way.

Harry freaks out that this golem is all a mistake. Macy tries to get him to calm down, but he just runs away. Macy looks to Celeste for help, clearly desperate to take away his fear. Celeste says he has to fight through that fear, because that is what humans have to do.

“It Is I, Your All-Powerful, Oversexed Overlord”

Maggie as Abigael goes by herself to get the password. My issue with this is not with the fact that Maggie is disguised as Abigael, meaning it’s Poppy Drayton playing Maggie. Poppy has Sarah Jeffery’s speech patterns and physical mannerisms down. It shows the issues with Abigael have never been with Poppy’s performance. My issue is the buddy system. Why is Maggie going to a demon’s lair by herself? This just seems completely unwise. 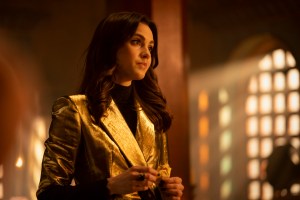 Regardless, this plotline means we get to see Fenric the Vile again, which makes me so happy. He is such a gloriously campy villain, which is my favorite type. He’ll only give up the password in exchange for his freedom and powers.

While Maggie stalls for time, she Facetimes Abigael, who says Maggie should have asked her for help. Maggie rightfully points out she didn’t know if she could trust her. Abigael tells Maggie that giving Fenric his powers and freedom places her life at risk, so she needs to make him just think he has his powers.

Fenric comes back and has a brief standoff with Maggie. He tells her the password is “vervek,” which means bloodstone. It could animate a whole army of golems. He calls her a pathetic excuse for an Overlord. Fenric is just gleefully taunting her. I want to keep him forever. She emotionally incepts him with the feeling of power, so he drops the password. As he tries and fails to vanquish her, she grabs the password and hops back through the portal. He lets out such a great frustrated wail. I love this actor. I want him to be a recurring character. He is the perfect villain for this show. Since they made the point to show him picking up the memory mirror, I hope he might make an appearance again.

“Fear Is An Evolutionary Response”

Maggie returns with the password. Celeste prepares to put it in the golem’s mouth. Harry bursts in and tells her not to do it. Everything is too easy. He thinks this is exactly what the Perfecti wanted. Macy tries to tell him his fear is getting the best of him, but Harry grabs the golem and orbs away.

They track Harry to Tulipe. Maggie comes across him first, and he freaks out. She tries to remind him about the glamour spell, but he’s too scared. Macy puts him in a containment spell. She tells him he isn’t thinking straight, so they have to think for him. The heartbreaking way he pleads with her not to do this made me tear up a little bit. They both bump into the forcefield, trying to get closer to each other. Between the direction of the scene and the utterly devastating looks between Rupert Evans and Madeleine Mantock, it was beautiful. 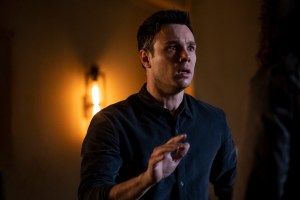 Maggie talks Harry through his panic attack, but he says he can’t relax when Mel is in danger. I understand why Maggie still had to be glamoured as Abigael for plot purposes, but this conversation would have hit so much harder emotionally if it was Sarah Jeffery. Poppy has done fantastic this episode with imitating Maggie, but it’s been an imitation. This was a conversation that should have happened between Rupert and Sarah.

Harry asks if this is how anxiety always feels. She tells him that sometimes she sees threats everywhere. He tells her his physiological responses may look abnormal, but he knows something isn’t right. He can see threats that only Maggie can see. She puts it all together and realizes Harry is right.

The Perfecti comment that everything is going according to plan. The Charmed Ones have activated the golem and they’ll be able to put an end to the chaos soon. They leap off a building together, which just seemed unnecessarily extra on their part, but points for flair.

“Your Certainty Is Your Undoing”

Celeste puts the password in the golem’s mouth and says it, but nothing happens. Maggie runs back to the others and tells them the password means blood stone, like the stones in the amulets the Perfecti always wear. Celeste argues says they saw the Perfecti’s memories. Maggie realizes they can alter their memories, just like they alter reality. They were showing how they defeated the Charmed Ones, not the other way around. The golem starts chasing them as Celeste fruitlessly yells the password. Maggie realizes it’s the actual stone that controls it. Macy uses her immobiliziation powers to try to hold it back.

They run back to Harry, who is more modest than I would be with his “I told you so.” He points out the Perfecti knew exactly what they would do. Maggie complains about how their certainty is extremely annoying, which Macy realizes is their Achilles heel. She immediately forms a plan. She tells Harry he will have to do something that might terrify him. The look that Rupert Evans gives her is possibly the most endearing thing I’ve ever seen. Macy tells Celeste to lower the protective spells while Harry taunts the golem to catch him. Eventually, he orbs just behind the golem and teleports them both away.

The Perfecti find Maggie, still as Abigael, crying next to Macy’s body and some mud. She tells them the Charmed Ones saved her, but she couldn’t save them. They reopen the Tomb, preparing to put Abigael back. As they preen over the fact their plan worked, Mo says it’s a shame because he liked them. Oh, Mo. I liked you, too. I’m going to miss you.

Just in time, the glamour spell wears off and Maggie is herself again. While the Perfecti are taken aback, Macy uses her telekinesis to summon their amulets. Celeste puts the protective candles back up and traps them. Macy calls out for Harry and the golem. Maggie and Macy tell them that power without humanity is the ultimate chaos. Macy uses the amulets to command the golem to put the Perfecti in the Tomb. The Perfecti try to tell them that there is another more powerful enemy out there, but Macy says they’ll take their chances. Immediately, Mel jolts awake back in Macy’s room.

“I’ve Come From The Future”

While Mel is in her magically induced coma, she has a wild dream. She can vaguely hear Ruby calling for her. Mel gets to the dying fire and sits next to it. It’s all lit in this really ominous way, and I love the way it’s directed. She gets up to walk around and sees a hooded figure. It’s Mel underneath the cloak. Well, it’s Future Mel.

Future Mel tells her that one day, she will again be able to use her time witch powers. She needs Current Mel’s help to save the both of them in the future. Current Mel says she has never wanted a future more, so she’ll do anything.

At the end of the episode, Harry and Celeste have a drink together. He comments about how some mortals can take on that much anxiety every single day. As somone who does have anxiety, any time they delve into it like this means so much to me. Celeste warns him this might just be the beginning. I just really need Celeste to continue to be around to help him through it.

And now for the big reveal of the episode. Mel tells her sisters that her future self asked her to do something. She stands up and reveals her very pregnant belly. With the straightest face, she says “This is my baby from the future, and it’s my job to keep it safe.” I fully understand this is probably to accommodate Melonie Diaz’s real-life pregnancy, but I let out the biggest laugh. It is so ludicrous and I am so excited.

How are you feeling after this episode? Find us on Twitter @capeandcastle to share your Charmed 3×14 thoughts. Be sure to check out our site for more content!