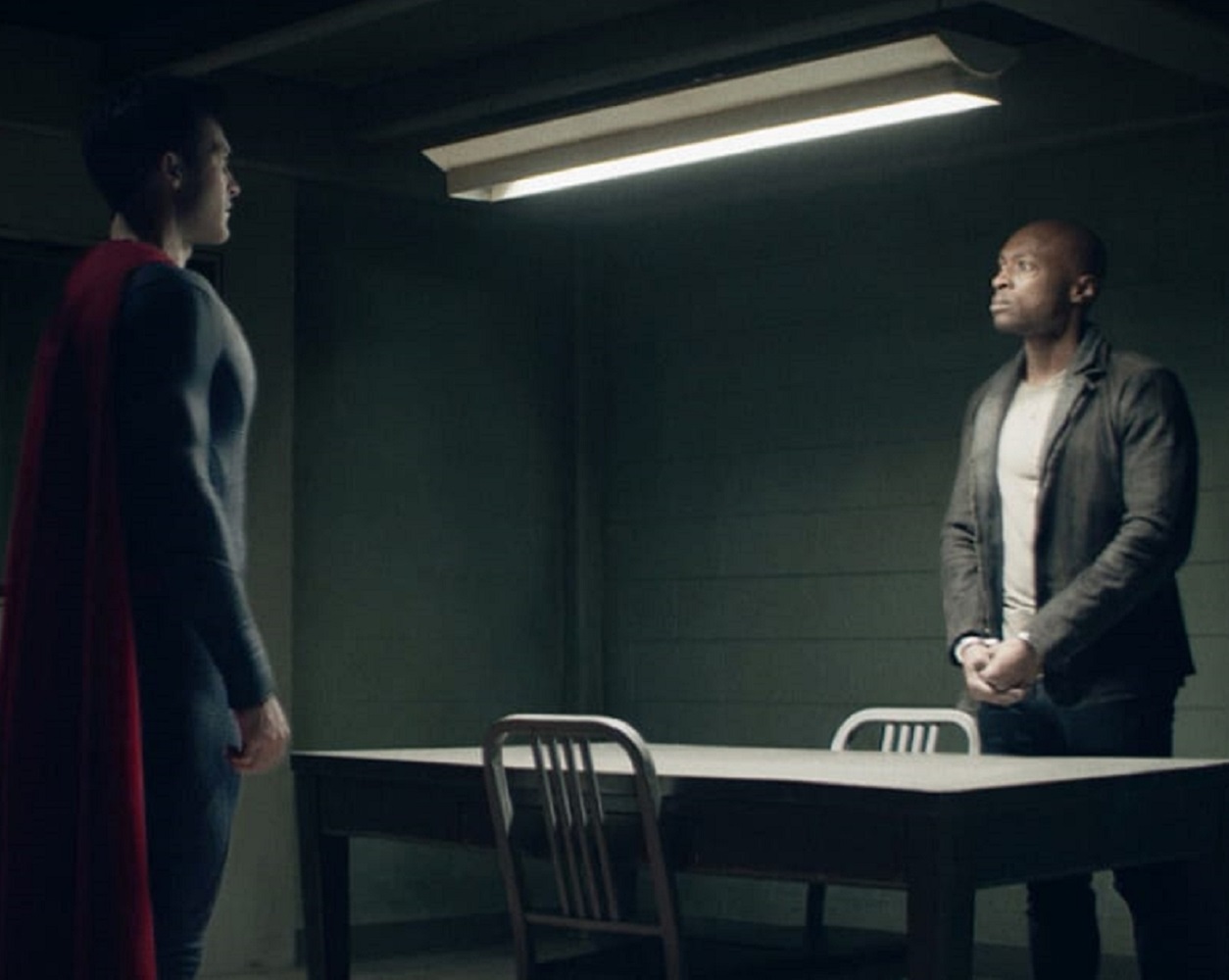 This episode was a bit different than the last few. Most of the time we’re dealing with Jordan and how his life is adjusting to being the son of Superman. Yet, in this episode, we get to see Jonathan’s side. We also learn something terrible happened to Lois years ago and she hasn’t recovered from it. So keep reading for our Superman and Lois 1×08 recap!

The episode begins with Lois seeing a therapist she’s seen before. The therapist is through the DOD. Lois goes through the past couple of days. It starts with Clark fixing the truck the boys crashed. He fixes the truck while the boys stand there watching. Jordan can help, but Jonathan doesn’t like being left out. 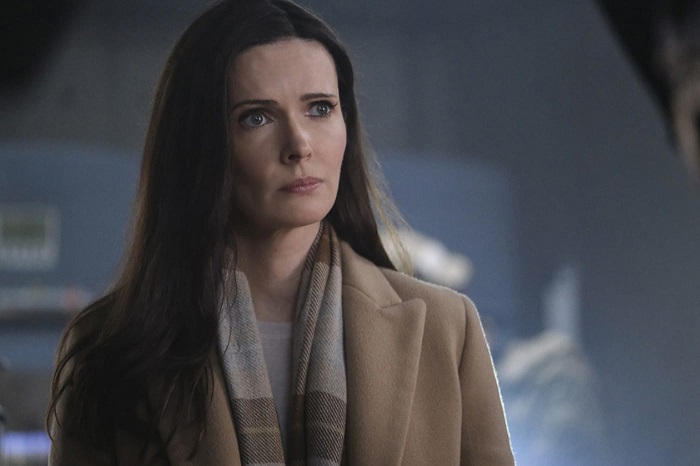 After, Clark gets summoned by Sam Lane at the DOD. Lois tells the twins they need to talk about the stress going on in their lives. A lot is going on. After Clark flies off, Lois says she’s going to snoop around Captain Luthor’s RV. Jonathan asks if he can help. When they enter the RV, the operating system inside wants to know who entered. When Lois tells the computer system its name, the computer says Lois is one of the administrators.

A friend of Sarah’s requests she try out for a talent competition. Sarah says it’s tonight and she hasn’t done any performing since she was younger. Kyle says it’s a perfect time and he can help her prepare. He reminds Sarah he has a guitar and it could be fun. Jordan talks Sarah into auditioning. She admits she has stage fright, Jordan tells her he’ll be there for her audition. So she goes for it.

The man going by Captain Luthor is from a parallel universe. His real name is John Henry Irons and he was a former Ranger on this Earth. On this Earth, Irons disappeared six years ago. Yet, on his Earth, John was married to another Lois. Superman was evil and killed Lois. Jonathan and Lois find evidence that Lois from the other universe was married to John Irons. They had a daughter named Natalie. Natalie was named after Sam Lane’s mother. On that Earth, John Irons watched Superman kill Lois.

Lois talks to the therapist about rage. Lois reminds us that words can cut deep. On the phone with Clark, Lois tells him that they’ll figure this out, they’ve been in similar situations. Clark replies with, “Learning that the man trying to kill your husband is your husband from another world. Sounds like new ground to me.”

We learn that Lois was pregnant a couple of years after the twins were born on this Earth. With a daughter, they were going to name Natalie. Jonathan sneaks into the RV. He wants to do something. He feels left out because he can’t do what Jordan and Clark can. When Jonathan opens up the compartment where John Henry stored all of his weapons; an alarm goes off.

Sam tells Superman the DOD will be doing torture on John Henry to find out what he knows. Superman says he doesn’t torture people.  Sam reminds us that Superman isn’t part of the DOD. 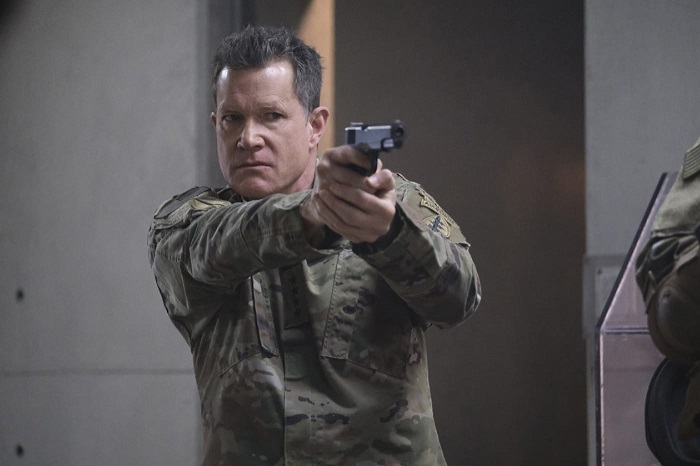 Lois hears Jonathan screaming for help in the RV. She shouts for Superman, who stops watching Sam interrogate John Henry, and rushes off to find Jonathan in the RV. He shields Jonathan from the bullets. Lois scolds Jonathan about snooping in the murder van. Lois tells Jonathan she doesn’t trust him anymore. She says he was reckless and stupid and that if he would have died it would have been his fault.

Jonathan leaves and Clark asks if Lois is okay. She says “I’m fine.” Which many of us know when a woman usually says that – it’s not true. He admits she may have gone overboard.

Kyle finds out that Morgan Edge wanted him for the trial. He confronts Lana about it and interrupts her in a meeting. He tells her that Leslie and Morgan wanted him for a position, yet Lana never told him. Lana lies and tells him Morgan doesn’t believe Kyle is leadership material. She tells him maybe Morgan didn’t talk to Leslie about him.

Back at the DOD, John Henry tells Sam that Sam also died at the hands of Superman on his Earth. Sam admits that this Superman would never do that.

One of the guards, Rosetti, that’s been guiding John Henry, kills the other guard, Trask. Rosetti, then, tells John Henry that someone wants to see him.

Lois explains to the therapist that she believes she had a miscarriage because of something she did. She also believes Jonathan was put in danger because of her. The therapist reminds her she shouldn’t feel guilty. Miscarriages happen for no reason. Neither occurrence was her fault.

Sarah is up next at the audition at the talent show. Her dad doesn’t show up. He’s off getting drunk somewhere. Jordan is there to support Sarah and even tries to bring her flowers. Instead, Jordan volunteers to help Sarah by playing the piano. At first, Jordan messes up, but he comes through for her and sings beautifully in the end.

Superman tells Sam about Natalie and that John Henry and Lois from the other Earth also had a daughter named Natalie.

Rosetti takes John Henry to Section 5 where the kryptonite is held. John Henry turns on an alarm when he pushes Rosetti out of the way. Superman tells Sam he’s going after them.

When Superman arrives at Sector 5, Rosetti sprays him with kryptonite. Rosetti gets the upper hand on Superman and before he kills Superman, John Henry stabs Rosetti. John Henry, then, gets ready to stab Superman with a kryptonite staff. 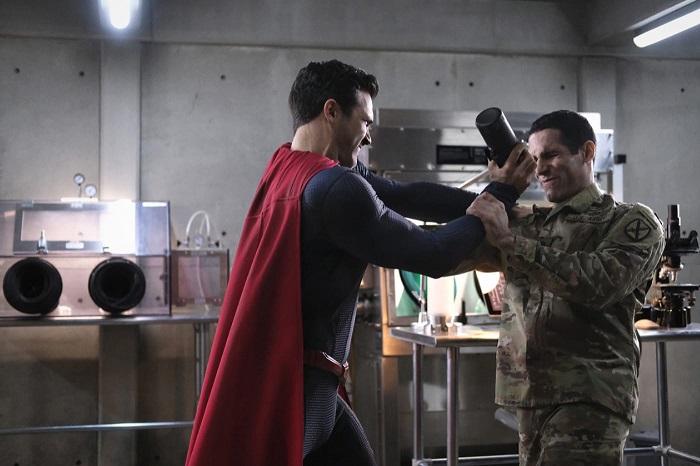 Finally, Lois shows up and tells John Henry this Superman is good and he would never turn evil. If John Henry kills an innocent man what does that make him? Finally, Lois tells him she knows about Natalie.

After the fight, Superman talks to Sam. Sam states that the kryptonite was being tested just in case. Superman tells him not to lie to him. Sam says he has a lot to do to gain Superman’s trust again. Superman, then informs Sam that Morgan Edge is building an army of soldiers with superpowers.

Sarah tells her father to not promise her anything. She hates getting her hopes up and being crushed. Lois apologizes to Jonathan and tells him about the baby she lost. She realizes she’s not okay even though it was so long ago. Jonathan accepts his mother’s apologies. She tells Jonathan she’s going to teach him some ways to protect himself. She says she feels like she’s holding the wrench at times when it comes to Superman. John Henry has been released and is free to go where he pleases. He’s outside the Kent Farm, picking up his RV. Superman shows up and talks to him about the fight John Henry believes is coming. John Henry says he won’t fight beside Superman. Lois tells John Henry she hopes he finds some solace. John Henry drives off. Is this the last we’ll see of John Henry Irons? What’s the fight John Henry Irons keeps talking about? How many soldiers does Morgan Edge need?