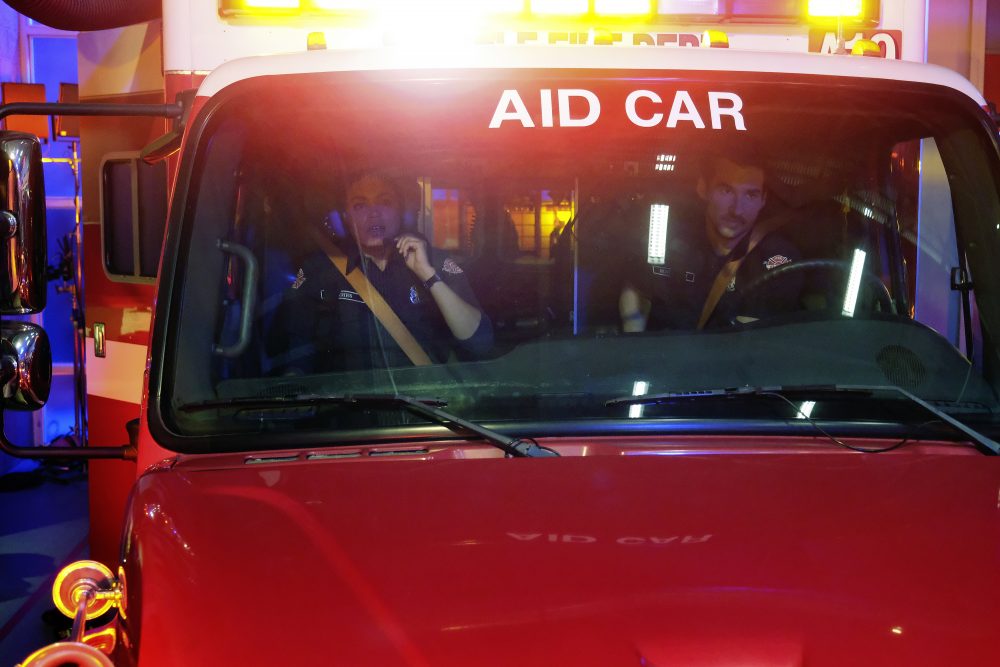 Station 19 continued their strongest season yet with a Victoria-centric episode this week. With an excellent script by Zaiver Stinnett and Rochelle Zimmerman and a truly standout performance by Barrett Doss, this might be my favorite episode of the season. Keep reading for my ‘Station 19’ 4×15 review!

The crew is preparing kits to work a street medic tent at the protests the next day. However, it is abundantly clear that Vic is less than excited. While everyone else talks about the protests or watches the news, Vic wants to talk about the guy who flirted with Travis at the grocery store, Maya’s engagement, and for some reason, French cuisine. Naturally, Travis picks up on the fact something is wrong with her.

Eventually, he tries to get her to talk about what is clearly bothering her. She made him rip the scab off when he needed to talk about Michael’s death. Now, it’s her turn to rip the scab. She brings up Breonna Taylor’s death and how it’s been bothering her over the past couple of weeks. There’s this beautiful monologue about how Breonna’s friends might have thought she was safe at home for the night and Vic can’t stop thinking about that. It starts out funny and then there’s just that heel turn into poignancy that Barrett Doss does better than anyone else. Without missing a beat, Travis directs them right back to working on dinner until they get called to a fire at Vic’s parents’ restaurant.

On the way there, Vic frantically tries to call her parents. As she tells Travis, the restaurant is her “crappy older sister” her parents have always loved more. Travis promises they’ll save her crappy older sister. It’s that mixture of humor and heart that makes me love this episode.

As soon as they get to the restaurant, Vic runs straight into the building, ignoring Maya’s orders. Theo’s crew is already there, and he gets Anthony and Lenya out of the restaurant. Maya tells Vic to go focus on her parents. It’s clear she would rather be focused on the fire. Dean realizes Vic is freaking out because her parents are freaking out. He swoops in and starts explaining everything the firefighters are doing to save the restaurant, taking care to point out the things Vic is especially good at doing. It’s an incredibly sweet way to show Dean knows how to manage Vic’s anxieties. She picks up on what Dean is doing, so she switches back into fire mode and focuses on explaining everything to her parents, too.

“You Don’t Have To Lift This All On Your Own”

Eventually, the fire gets put out. As the crew prepares to leave, Vic tells Maya she knows her parents are going to go back in as soon as they’re gone. Maya leaves behind the engine to start cleaning up, letting both Vic and Travis stay back. 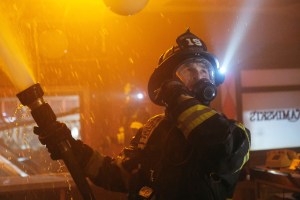 Travis, Vic, and her parents all go inside to start cleaning up everything. Vic wants to talk about what happened, but Anthony and Lenya are too focused on cleaning everything up. Vic complains to Travis that they never talk about anything, which is where she learned her ways. She tries to get her parents to understand they actually do need to assess the damage, but they’re convinced they can just push through. And it’s such a great depiction of how hard it can be to get your parents to see you as an adult. This is what Vic does for a living, but they’re her parents, so they think they pull rank.

Finally, Vic snaps. She starts yelling about how they never talk about anything. Her grandmother died and her dad went back to work. Ripley died and Vic went back to work. It’s what they’ve always done, but she doesn’t know if it’s working anymore. She brings up Breonna Taylor and asks if her parents have even thought about the similarities to her. She wants them to acknowledge that something terrible has happened. Terrible things have been happening for years, but they keep glossing over everything. She needs to talk about it. And again, it’s a beautiful monologue from Barrett Doss. It could have easily come off as hamfisted, but she has so much heart in it. She admits that she is sick and scared. Before he goes back to cleaning up, Anthony admits he is, too.

Theo comes back to help with the clean up. He starts to leave when he sees Travis is there, but Travis tells him to stay. It’s nice to see them achieve some sort of peace with each other. Even though I don’t want Theo to be a love interest for Vic, I want Travis to reach peace with his former best friend. He was an important part of his life for so long and Travis needs that healing. While Vic works with her parents, Travis and Theo focus on boarding up windows and providing general support. Theo finally gets a chance to apologize to Travis.

A particularly pesky reporter has been trying all night to get a comment from Anthony and Lenya about the fire. He pushes closer, asking how they feel about the riots destroying their business. He’s pushed away a couple of times. Once the crew leaves, he pushes into the restaurant to get a comment. Vic tries to get him to leave, but Lenya has had enough. She says her comment is to “let it burn.” She and Anthony give a beautiful speech about how damaged property doesn’t equal life. If people are more upset about damaged property than murdered people, then they need to reassess their priorities. It’s something that’s been said endlessly since last summer (and much longer than that), but this whole sequence is gorgeous. The dialogue is excellent throughout the whole episode, but this scene is my favorite. 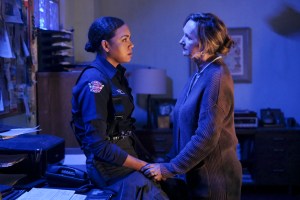 Tensions have run high between Vic and her parents the entire episode, but once Vic finds her parents’ back room with news clippings and programs of all her professional and theatrical accomplishments, she sees her parents are trying to support her. Lenya comes back and they finally get to talk. Lenya tells Vic she is afraid. She doesn’t know what it’s like to be a Black woman in this world, but she knows what it’s like to parent a Black daughter. She tells Vic that her parents kicked her out of the family for marrying a Black man. That is complete news to Vic. It’s a sweet moment to show Vic finding some common ground with her mother.

Vic and Lenya continue their conversation as Vic asks why her mom never told her about her family. Lenya explains she didn’t want Vic to carry that burden. She promises that everything she ever did was for Vic, though. Lenya is always thinking about her. Then Lenya takes a plate and smashes it on the floor. She says it’s a Greek death tradition to try to control the loss felt when someone dies. She and Vic keep smashing plates until Anthony comes to join them. Eventually, Theo and Travis come to smash some plates, too. Jay Hayden looks absolutely overjoyed to smash that plate. It’s a beautiful cathartic moment for all of them.

Outside of the Vic storyline, we get a running storyline about Jack’s ensuing wokeness. He has learned lots of “fun facts” over the past few weeks and he seems excited to share them with people. However, Jack is still in the beginning version of this class and everyone around him is in the advanced studies. So, he’s giving out facts about how modern policing originated out of slave patrols or the text of the 13th amendment. He has some strong second grader giving a book report energy. And depending on how people feel about him, it makes sense how they react to him. Sullivan is looking around to everyone else, like “are we really going to sit here and indulge this guy?” Since Dean is Jack’s best friend, though, he gives him more of a “That’s right, buddy.”

Jack is clearly excited to learn new things, so this storyline is played a little for laughs. He’s gaining a deeper understanding of how the world is for his close friends. It could be super irritating, but Grey Damon plays it really well. And that’s how it was for a lot of white people last summer during the protests. But it’s just as important for us to see how Sullivan and Dean and everyone else are responding to Jack’s newfound “wokeness.” While it’s great he’s learning these things now, why did it take this long? Why did so many people have to die so he would start to care?

Back at the station, Andy and Jack get a chance to talk while making chicken tikka masala in the middle of the night. Andy realizes a lot of Jack’s issues right now are about his relationship with Inara. Just as was teased at the end of the last episode, Jack is struggling to figure out if he wants to date Inara or take care of her. Jack needs to be needed. He only knows how to operate in crisis mode. He tells Andy that things are “fine” between them. As Andy points out, though, “a girl needs more than fine.”

Dean’s lawsuit takes a backburner this week. He has some tension with the PD at the fire scene, but Maya and another police chief are able to easily diffuse the situation. It’s nice to finally show there’s a police officer who appears supportive of what Dean is trying to do.

Once the rest of the crew gets back to the station, Maya has to break the news that their permit for the street medic tent got pulled. Tensions are running too high, so the city doesn’t want the fire department and police to appear like they’re on different sides. Everyone agrees that it’s total bull. Maya tells them they can’t still go. glares and slams the engine door on the way back into the station. 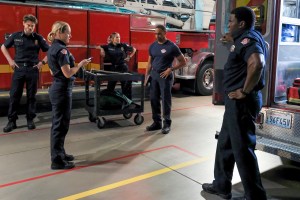 The next morning, Maya finds Dean on the treadmill and checks in to see how he’s doing. He says he’s just tired of constantly getting shut down. First, with his lawsuit that is just going to raise awareness. Now, it’s with the medical tent. Maya suggests they go as civilians who just happen to have paramedic training. Dean realizes what she means and starts to get excited again. He asks if they can bring some stuff from the station, but she just says she didn’t hear that as his captain. As she leaves the room, Dean asks if she and Carina can please have a firehouse wedding to bring some joy back to them all. Plus, “this body is too good not to dance.” After a season where Dean has had so much heaviness, it’s wonderful to see him smiling and teasing again.

All that sets us up beautifully for next week’s season finale, which seems to contain the promised firehouse wedding. How are you feeling after this week? Follow us on Twitter @capeandcastle to share your ‘Station 19’ 4×15 thoughts. Be sure to check out our site for more content!