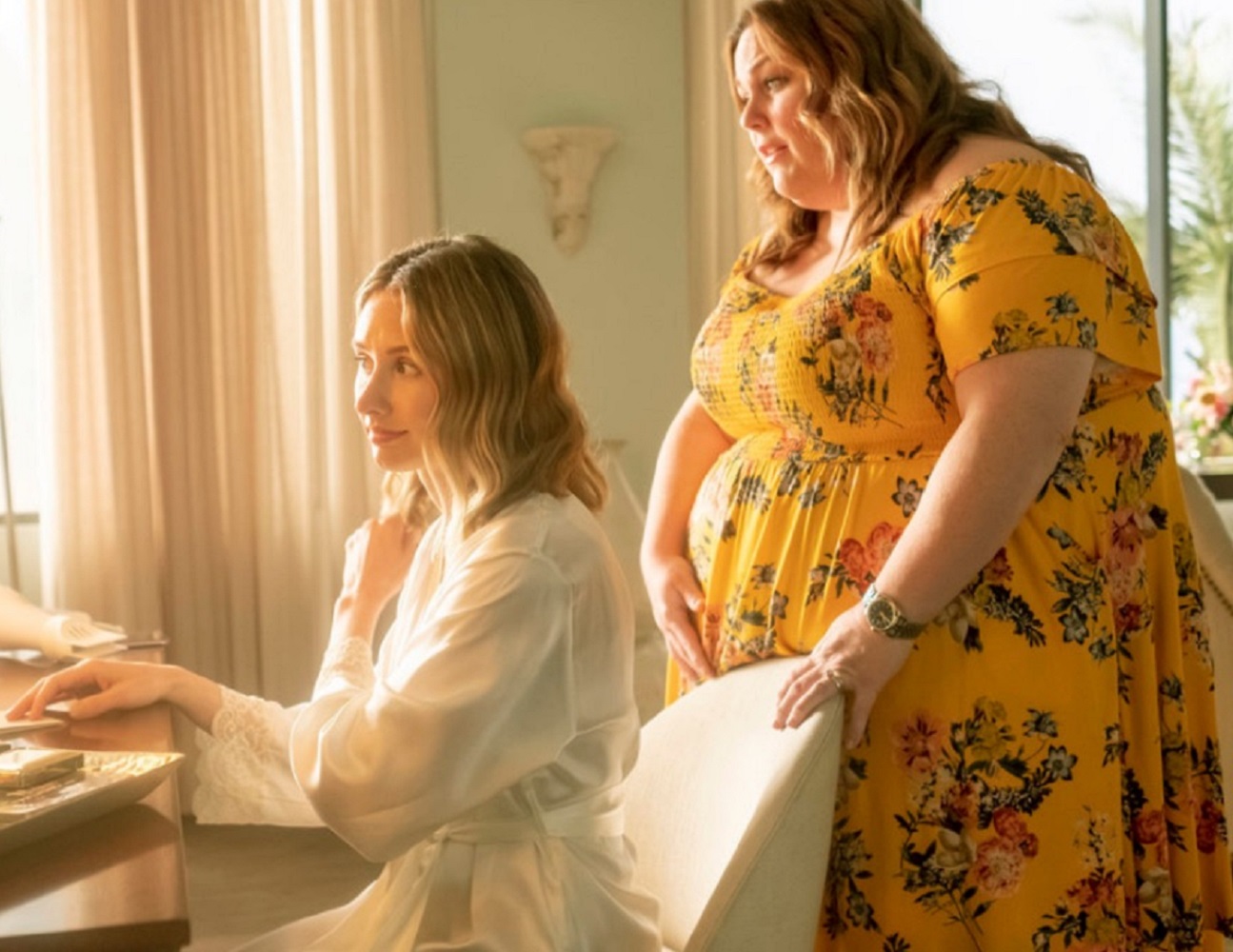 The season finale of This Is Us gave us a flash-forward that left us with more questions than answers. But overall was a fitting end to season five. So read on for our This Is Us 5×16 recap!

“Will You Guys Marry Me Forever?”

This episode starts with a fluffy flashback to when the big three were four. Rebecca is horrified to realize that Jack taped over the Dynasty finale before she had a chance to watch it. And when they try to prove how much they are still in love by showing them a home movie of their wedding day, matters are made worse.

Rebecca realizes Jack doesn’t remember his wedding vows and he dismisses her show as unimportant. As a child of the 80s, I would like to say here that the Moldavian wedding massacre of May 1985 was indeed a big deal. No matter what Jack thinks. Kate declares that they need to get married again, and Jack and Rebecca stage a makeshift ceremony in their living room where they include the big three in their vow renewal.

Kate is upset to learn that not only will Toby’s new job have him in San Francisco three days a week, but he’s unhappy with being a stay-at-home dad. While helping Madison prepare for the big day, Kate is reminded of her own vows and calls Philip to quit her job. But he won’t hear of it. He may not have wanted to hire her but she’s good at what she does. Toby has his own revelation and decides not to take the new job. Kate surprises him by saying neither one of them is giving up their dreams. They’ll find a way to make it work.

Beth finds herself once again at odds with Tess and reaches out to her when she realizes she’s unhappy with her bridesmaid dress. Tess tells her mother she feels like everyone wants a version of her that isn’t her. So Beth does some major alterations to the dress and Tess is overjoyed by the results. She tells her mother she’s sorry for her behavior over the past year. And after assuring Beth that she’s gotten more things right than wrong with her, Tess tells her mom she loves her.

Rebecca asks a reluctant Randall to talk about his trip. He avoids her until she corners him. Rebecca tells Randall no matter what her reasons were for keeping the truth from him she still robbed him of a forum to talk about his birth parents. And growing up black in a white family. Rebecca apologizes and encourages her son to tell her about Laurel, and if she cries or gets emotional know it’s because she’s deeply ashamed for what she’s done. After emphasizing that Laurel is his birth mother not his mother, Randall tells Rebecca learning about Laurel unlocked a part of himself he never knew existed. 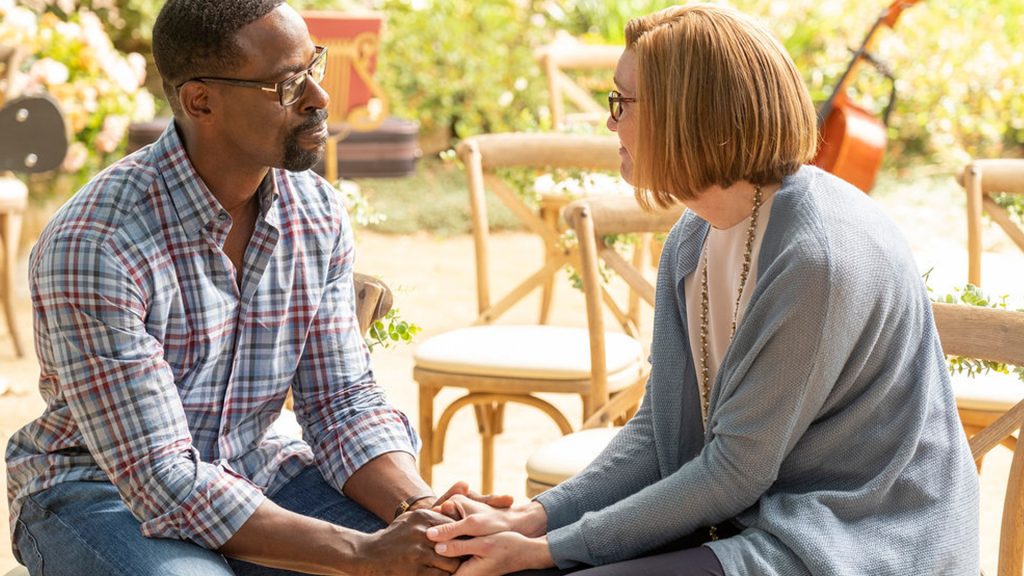 Through a series of flashbacks, we see Madison as a little girl as her mother is packing. Her mother gives her a pair of earrings to wear on her wedding day and tells Madison maybe she’ll find a better man than she did. We then see Madison as a teenager crushed over not being asked to the dance by the boy she likes. Her father tells her she shouldn’t be choosy and just go with whoever asks her. And finally, we see Madison as an adult trying to convince her boyfriend to stay.

After resisting the urge to binge eat, we see Madison at the support group where she meets Kate. It gives Madison the courage to ask Kevin if he’s in love with her. When he can only say he loves the life they have she tells him she can’t marry a man who doesn’t love her. Our Kevison hearts may be broken that we didn’t get a wedding. But a round of applause for Madison for realizing her worth as a person and that she deserves more than what little affection she’s been given in her life.

As the hour draws to a close, Rebecca, Randall, and Kate are comforting Kevin. Rebecca remarks that it’s getting harder to picture Jack in their lives as they are now. She tells her children she doesn’t know how many good years she has left. But she wants to spend them with her family. She asks Kevin to build her the house his father always planned to. Randall declares that after the year they’ve all had it’s only going to get better. With those words, four years into the future is shown.

Kevin is rehearsing his wedding toast written on a piece of paper saying Big Three Homes. As he grabs his tuxedo jacket he glances at a magazine article declaring Randall a rising star. Leaving his hotel room he runs into Nicky who says he’s late because his wife needed stockings. Kevin knocks at another door and finds Madison and Beth dressed as bridesmaids. Madison playfully says she told Kevin twelve times that morning no boys were allowed. Kevin insists he just needs to know what he can and can’t say during the toast. And it’s at that point Kate walks out a glowing bride. She tells Kevin since she’s not doing this again he can go all out. Kevin walks out of the room and runs into Philip. Who turns out to be the groom.

So what are your thoughts on this week’s episode? Where will it take us in the final season? Did Kevin start Big Three Homes with Miguel as his father always dreamed? Are Kevin and Madison a couple four years from now or just friendly? While we’ve known for some time that Kate and Toby are no longer together in the future, did it shock you to discover they’re divorced and she’s remarried? And where are Kate and Miguel in the other future timeline? Who’s Uncle Nicky married to? And who’s in the car that pulled up to what we now know is Rebecca’s house? Be sure to comment below and follow us on Twitter @capeandcastle! And check out our site for more content!