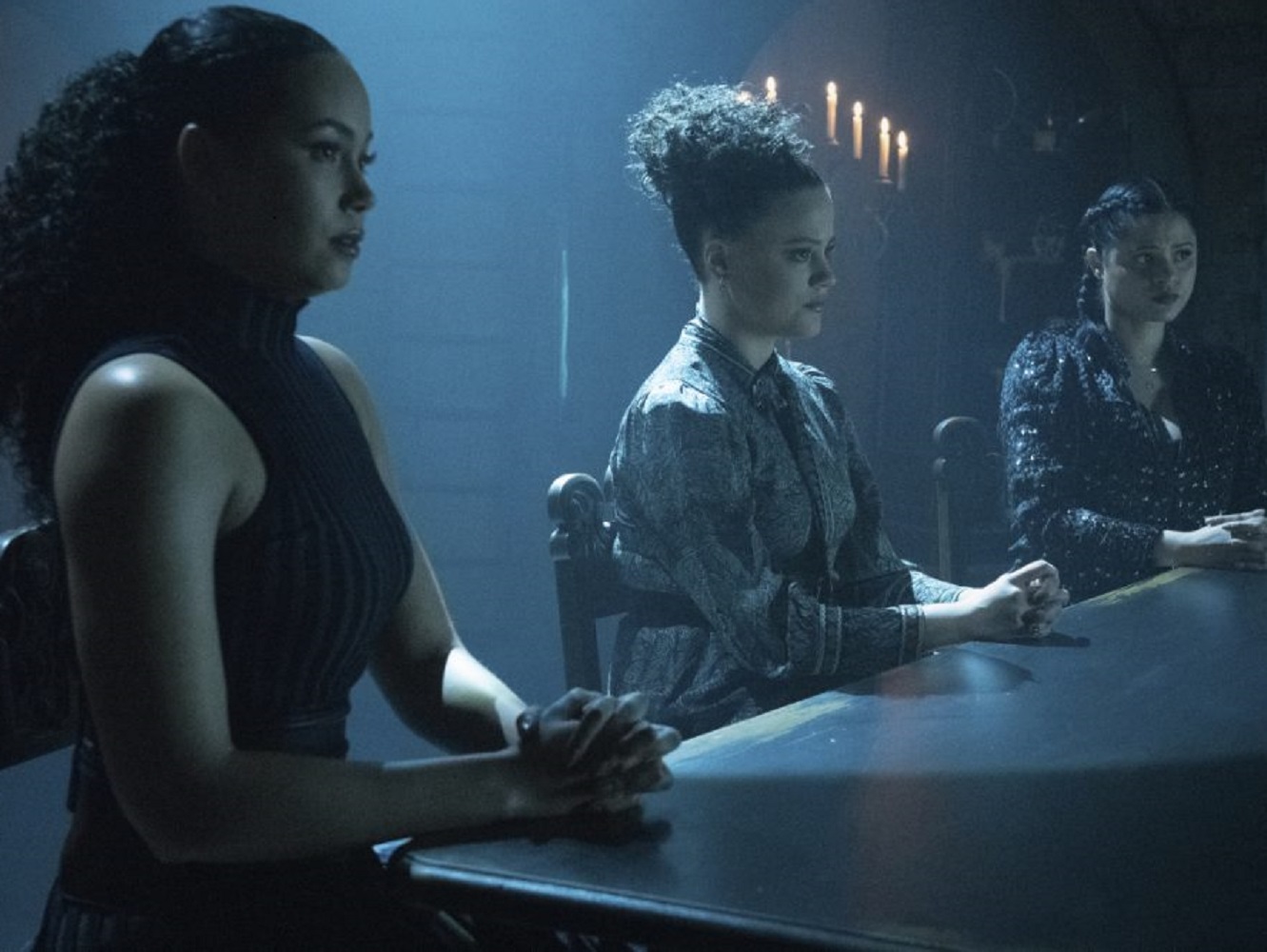 This week’s episode was all about the redemption of one Abigael Jameson-Caine. It was a complicated episode that did some things well and some things astonishingly poorly. So, let’s get into the good and bad of it. Keep reading for my Charmed 3×13 review!

I am changing things around for this recap, in honor of the change to the episode’s structure. We’re going to do an overall summary of the plot and then break down the good and the bad.

Abigael and Jordan are indeed in the Tomb of Chaos, just like they teased at the end of last week’s episode. The Perfecti deemed Abigael a chaotic being. Jordan was at the scene of the crime, so he is chaotic by association. The only way to free Jordan is if they can prove that Abigael also doesn’t belong. Most of the episode focuses on Abigael’s trial. Ultimately, the Charmed Ones use the Power of Three against the Perfecti, freeing both Abigael and Jordan. Abigael appears to be ready to make amends and Jordan decides he needs to leave town for a while. In an ominous final scene, the Perfecti say they have to destroy the Charmed Ones, just like before.

When I realized this was the episode where they were going to go all-in on the Abigael redemption, I was prepared to be irritated at best, irate at worst. I’ll be clear about one thing upfront. I didn’t hate this episode. As an individual episode, I really liked the way they messed with the episodic structure. It made for an entertaining hour of television. The trial format was absolutely the only way Macy would ever even slightly entertain the idea of helping Abigael. She treated it as an academic exercise, making it clear that she firmly believed Abigael belonged in the Tomb of Chaos. However, she was also going to do what it took to save Jordan. 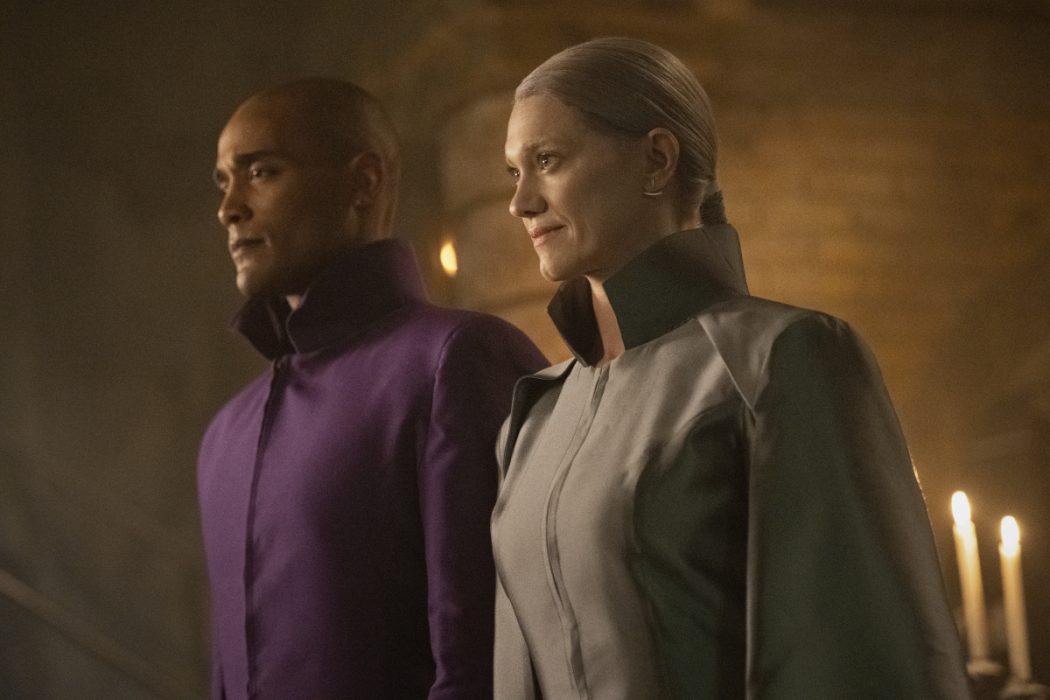 The actual trial scenes looked really cool. The set design and lighting provided for a truly epic look. Having a “magical freaking statue” as Lady Justicia also kept up the magical atmosphere. The direction in this whole segment was phenomenal.

Having the show temporarily become almost a legal procedural allowed for the characters to talk about previous scenes without it feeling overly exposition-heavy. And with as many previous scenes as they showed this week, it could have veered very easily into clip show territory. It was a super delicate line to balance and I thought the episode on its own was fine.

The problem is the overall logic of everything made no sense. Tying Jordan’s fate to Abigael didn’t make sense. If anyone had just said “Why don’t we ask Jordan what he was doing with Abigael,” he probably would have walked free. The Perfecti’s issue was largely with Abigael’s demon form, which Jordan was helping her to bind. Thus, it could be possible to argue that he was making her less chaotic, which would possibly free them both.

“What Kind Of Magical Hell Am I In Now?”

So, let’s talk about Jordan. Yet again, Jordan suffers for the sake of Abigael’s redemption. So far this season, Abigael attempted a mind meld on Jordan without his consent. She held him captive in her apartment as she threw fire at him. Now, she possibly got him sentenced to life in prison for something he didn’t do. The show comments on it by Jordan saying that even in a magical jail built before the dawn of time, the Black man gets locked up for something he didn’t do. Commenting on it doesn’t make it less problematic.

Jordan Donica does some truly heartbreaking work in this episode. The Tomb messes with his mind, just like it did to the Charmed Ones. He regresses to his teenage self, thinking that Maggie is his high school girlfriend. Maggie finds the first aid kit from his gym. He realizes it is the wrong color and taps back into reality.  Unfortunately, later, he regresses even further back to his toddler self. The sight of him hunched over asking Maggie if his dad still loves him actually made me tear up a little bit. He does this pain and suffering so well, but Jordan deserves a break from it forever. Just let him smile.

When Abigael finds out Jordan is also locked up with her, the attitude is very much one of “collateral damage.” Truly, if she had shrugged and said, “sucks to be him,” I would not have been shocked. She later says she’ll do whatever it takes to get him out of there, but she does absolutely nothing. She actually undercuts the Charmed Ones’ defense of her because she wants to stay in the Tomb. That would just ensure Jordan would be with her, too. She doesn’t seem to want to stay in the Tomb because she truly believes she has done wrong. She wants to be safe from her demon form. So, even this fighting to stay in the Tomb is completely self-serving.

Ultimately, the Charmed Ones make the argument that they’re just as chaotic as Abigael is. They bring up all the times that Jordan has suffered because of them. So, no, Jordan would not have eaten Darklighter candy or posed as a dead body or gotten trapped in Josefina’s cursed bag if it were not for them. Jordan would also have been dead by the time all of those things happened. Meeting the Charmed Ones was what allowed him to break his family curse and live past the age of 26. The difference here is Abigael inflicted suffering on him, but he fully consented to everything with the Charmed Ones. Not to mention that all of the chaos the sisters have inflicted has been to save the magical world, while Abigael’s has been self-serving. It’s a completely false equivalency. 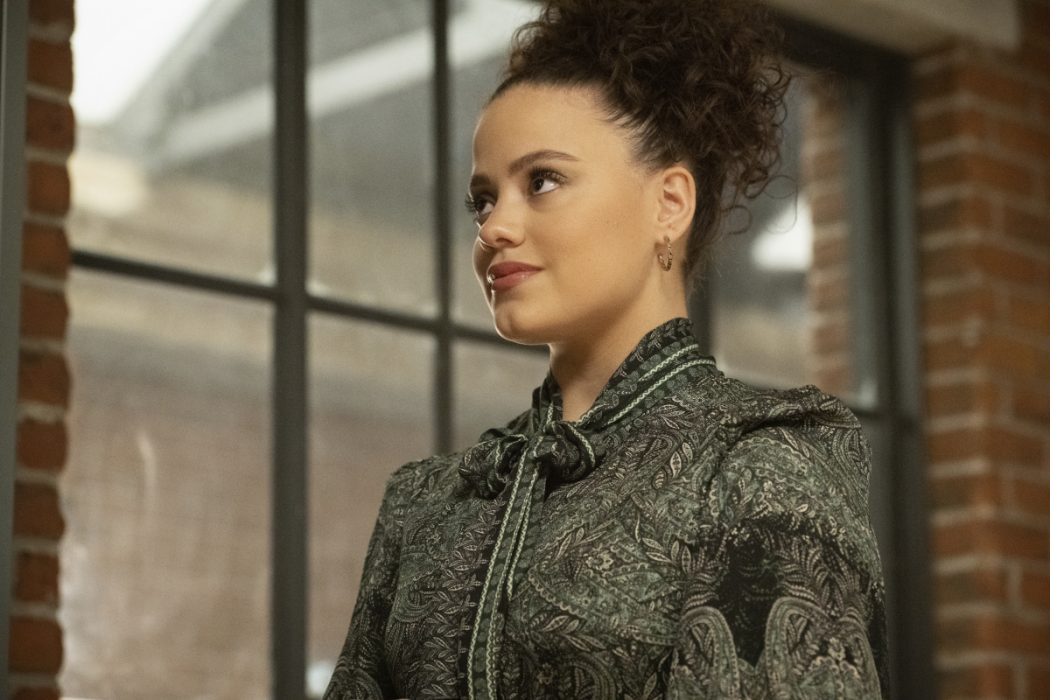 At the end of the episode, Jordan tells Maggie he’s going to visit some family in Colorado, wanting to go somewhere quiet. It’s pretty clear that Maggie was about to admit her feelings to him in some sort of way. If they want to do a slow burn for Joggie, they’re doing fine with building that tension because I was screaming for him not to go. I just hope Jordan isn’t gone for long. He truly brings something special to the show.

“How Do We Defend Someone Who Is Indefensible?”

The trial aspect makes it so the Charmed Ones have to analyze all of Abigael’s past actions. Macy largely stays true to character by affirming that Abigael has continuously proved herself to be indefensible. Macy has the most baggage with Abigael and it would have felt completely out of character for her to entertain the thought of helping her, if not for Jordan. Maggie is the empathic one, so it makes sense she would try to look for the good in Abigael, especially for the sake of Jordan. It has never made any sense at all for Mel to believe in Abigael, though. The scenes between the two have always felt wildly out of character because the Mel they’ve established would not excuse someone murdering innocent witches. Nothing about Mel’s actions in this episode rang true to her character. 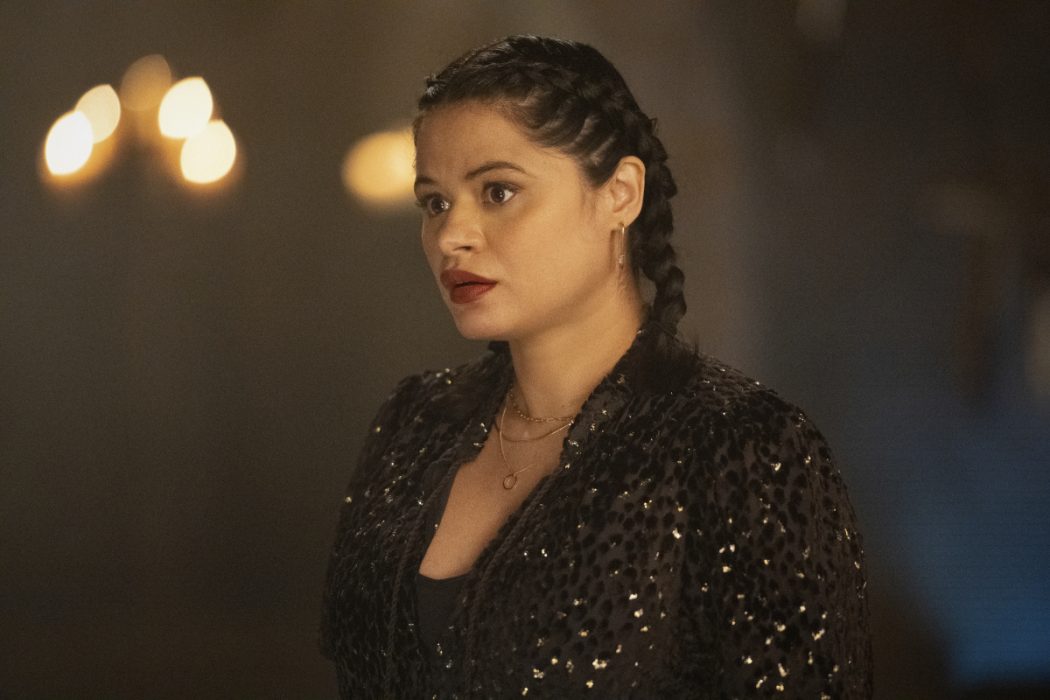 This episode really wants us to understand that Abigael only murdered those two witches in the season two premiere because she thought the Charmed Ones sent the Darklighter after her. And again, that is not a good excuse. She murdered two innocent witches completely unrelated to the Charmed Ones because of a misunderstanding. As Jake Peralta would say, “Cool motive, still murder.” They also bring up the time she almost killed Macy because of that same misunderstanding. It’s theoretically self-defense, I guess. It was also premeditated. The argument doesn’t quite hold up.

The writers focus in again on Abigael’s childhood trauma. Once again, they take her abuse to another level. Last week, we learned that Francesca would routinely lock Abigael in a crate. This week, they added in the shock cuffs she put on toddler Abigael to deliver an electric shock whenever she used her powers. I truly feel like a broken record at this point, but the writers keep doubling down on this idea that since she had a horrific childhood, that somehow excuses all the truly abominable things she has done as an adult. And it just does not. I’m reminded of the “Crazy Ex-Girlfriend” song “Nothing Is Ever Anyone’s Fault” about how childhood trauma excuses all bad actions, but at least that was satire.

This brings me to the truth serum scene. Since everyone else has turned down the request to be a character witness for Abigael, it falls to the Charmed Ones. Abigael keeps undercutting their testimony, so Maggie doses her with truth serum and puts her on the witness stand. She admits that she finds Harry to be a kind man who belongs in this world. Abigael helped the Charmed Ones because she feared a world without them in it. And she has deep feelings for Mel and wants to be a good person for her.

With the exception of Abigael’s feelings for Mel, none of this makes sense with what they have previously established for Abigael’s character. Even the feelings for Mel are a bit of a stretch, but that admission at least didn’t feel like it came out of the blue. The scene felt like the writers were telling the audience they’ve watched everything wrong. It was like they said, “This is what you were supposed to be thinking all along. If you didn’t pick up on that, maybe you just aren’t smart enough to figure out what we’re trying to do here.”

The one good part in this segment is that Macy finally realizes that when Abigael stripped her of her demon powers, she kept them for herself. That confrontation between them should have happened ages ago. The show shied away from the problematic way it was filmed where they literally had Macy on her knees as Abigael stole her power for herself. Abigael says she will return Macy’s demon powers, but it feels “too little, too late.”

The final scene establishes the Perfecti are likely going to be the final Big Bad of the season. I’m very excited about the showdown with them. They’re extremely intriguing villains and I’m ready to see how that storyline goes. I hope we can move forward with less of Abigael and a lot more of the Charmed Ones. How did you feel about this episode? Follow us on Twitter @capeandcastle to share your Charmed 3×13 thoughts! Be sure to check out our site for more content.