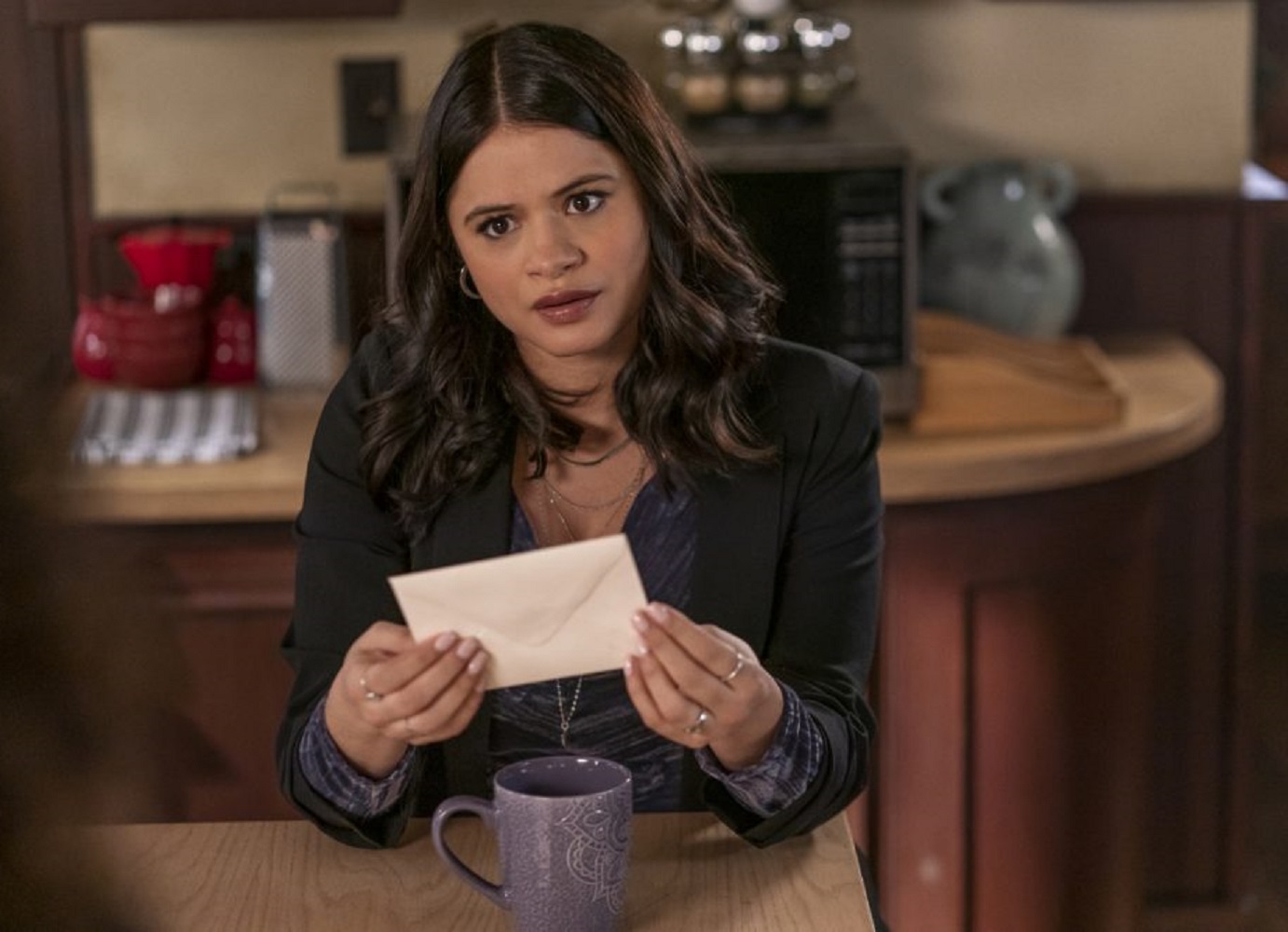 This week’s episode continued with the up and down quality of the season. Sarah Jeffery was completely dynamic. There was satisfying progress with Harry and Macy. Harry’s plot gave us a great callback to season one. And then there was Abigael. Keep reading for my Charmed 3×12 review!

“I’ll Do Anything To Be Let Out”

We’re going to get Abigael out of the way now. We start with her trying to break out of the Tomb of Chaos, which keeps setting out a glass of scotch for her to drink. Eventually, when she refuses to drink it, the Tomb ups its game and sends her mother Francesca to her.

As has already been established, Francesca was a witch and she was horribly abusive. She messes with Abigael’s mind, saying that she knows she just wants to be a part of the family again. Not able to say no to the possibility of a mother who loves her, Abigael gives in momentarily.

For a while, they joke and laugh with each other. Then Abigael remembers all the abuse her mother inflicted on her, including apparently keeping her locked in a crate. Abigael cries that she was just a child and she didn’t understand. As Abigael refuses to drink her scotch, Francesca pulls out the crate and shuts her inside of it. She pleads to be let out by the end of the episode.

First of all, this is the most emotionally manipulative villain redemption arc I’ve ever seen. I’m trying to think of a more egregious one, and I can’t. At every point, Abigael’s actions have shown her to be in the wrong. Everything she has done has been to gain power for herself. And now, the writers are bludgeoning the audience with lazy sympathy ploys, from self-harm last week to child abuse this week.

Let me be clear, I have nothing but sympathy for the pain Abigael experienced as a child. But that sympathy ends when she begins inflicting pain on other people. We know that hurt people will hurt people. That is not an excuse, though, which this storyline misses entirely. Past trauma does not excuse current actions. At every step of the way, this storyline manages to be horrifying in all the wrong ways.

“For When It’s Too Painful To Be Near Each Other”

Now, let’s get into the storylines involving the actual Charmed Ones. While continuing to search for a cure to the allergy, Macy comes across a box of letters from Marisol. One is addressed “To my girls, for when it’s too painful to be near each other.” Macy thinks it is about the allergy, but the ink is too faded.

Macy and Maggie decide to have a seance and talk to Marisol’s spirit, both looking for answers from their mother. Unfortunately, Macy doesn’t read the fine print. They use Marisol’s letterbox, but they bring back the original owners: a 17-year-old girl named Daisy and her father, who were killed in a drunk driving accident. Their spirits are both inhabiting Maggie’s body. They will stay there until they can finish their unfinished business.

Sarah Jeffery has gotten to do a lot of cool and different stuff with Maggie this season. This is no exception. The way that she differentiates between the four characters she’ll play this week is super subtle, but it’s so effective. I’ve been having a blast watching what she’s doing with Maggie. 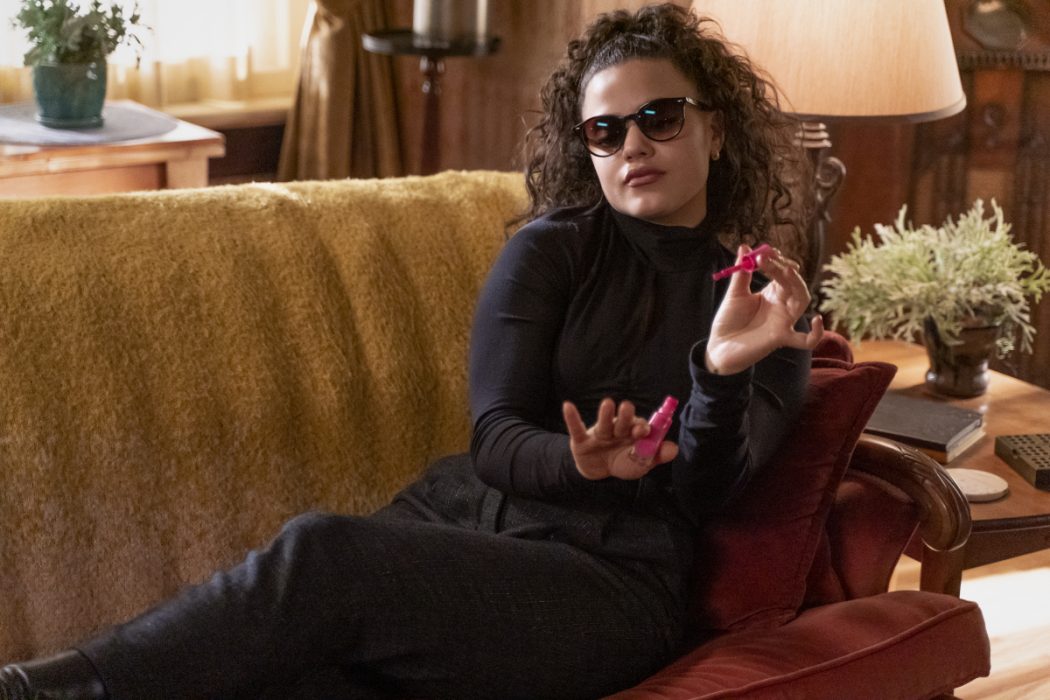 Macy chats with Daisy and Roger to figure out what they need to finish. They were killed when a drunk driver hit them after Daisy’s prom, which she snuck out to attend. Roger tells Macy how he kept Daisy from having life experiences because he was afraid of losing her, which is particularly poignant for Macy to hear this week. Once he’s able to apologize to Daisy for not letting her go to prom, his soul crosses over.

Meanwhile, Daisy just wanted to dance with her crush. Fortunately, Antonio shows up at the house for reasons we’ll discuss more later. Daisy knocks him unconscious in a temper tantrum. When he comes to, Macy convinces him he’s dreaming and Daisy gets her dance. Also, Sarah Jeffery totally rocks this 80s-era look.

Back in the attic, the spell continues and finally, Marisol’s spirit inhabits Maggie’s body. Again, the way Sarah Jeffery portrays Marisol’s spirit is perfection. Macy asks her about the letter, but Marisol says it was a reference to sibling rivalries. However, she thinks Macy really wants to ask her about Harry. She tells Marisol she worries about him becoming mortal, but she just wants to be a normal couple. Marisol reminds her she knows what it’s like to spend a lifetime apart from the one you love. Then a little too quickly, she says her goodbyes and leaves.

I know some people who were frustrated that the questions were about Harry instead of why Marisol didn’t talk to her family or why she kept their powers a secret. Then I remember those are the questions the fans want to know. At that moment, all Macy wanted was to ask her mother for advice. I wish we had been able to spend more time with Marisol, which is surely what Macy would have wanted, too.

“I Want A Full Life With You”

Harry goes back to Mo for help with his mortality. Mo sends him on a quest for a direct male descendant from James Westwell for a “soul donation.” Harry does not ask nearly enough questions about this. He just takes the “soul softeners” Mo gives him, along with a brochure about the side effects. Harry tosses it to the side the same way I just check yes on any box asking if I’ve read the terms and conditions. 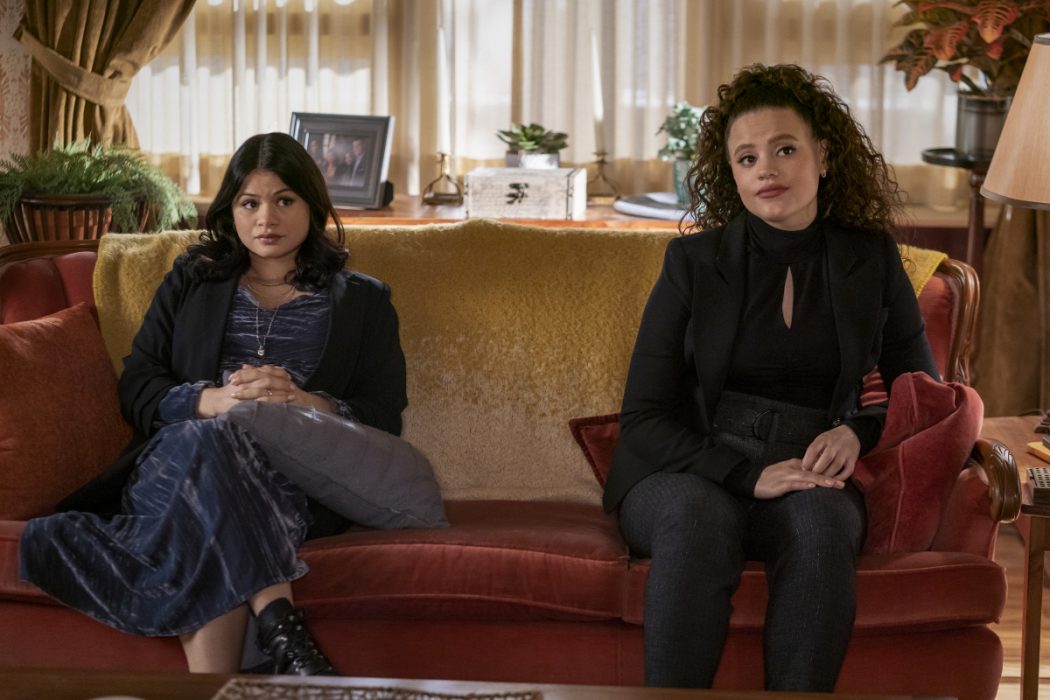 He goes back home and talks with the sisters, asking for their approval. I really appreciate the way they remembered that this doesn’t just affect him and Macy. He would also be giving up his role as their Whitelighter. Mel assures him they can take care of themselves, while Maggie says he’s sacrificed his happiness for long enough. Macy is still uncertain. Mel immediately asks what they need to do next. I loved the way she looked to Macy first, clearly recognizing her sister needed someone else to take point.

Mel and Harry set off to England to find his son, Carter. It’s a nice callback to the season one episode where they went to England. I wish Mel had been there for the Marisol plot with her sisters, but I can’t imagine any other character going with Harry and getting the same emotional impact.

Unfortunately, they’ve arrived at Carter’s home just in time for his funeral. They find his youngest daughter Jill, who way too easily believes Harry’s excuse for the fact he’s identical to James. We also meet Georgie, a young boy who loved his “Uncle Carter.” He is a monster of a child, who constantly is having a temper tantrum and shoving sweets in his mouth. Just as Mel and Harry get ready to leave, he realizes all the soul softeners have fallen out of his pocket, since they were just rattling around like loose change.

Mel finds out that Georgie is actually Carter’s son, the product of an affair. Carter takes after his father in that way. Mel goes to tell Harry the good news about having a direct male descendant, just as they realize Georgie has eaten all of the soul softeners. His soul is completely detached.

Truly, the best image in this entire episode is Georgie crouched in the corner sharpening a cleaver. His eyes are red. He’s basically growling. I laughed so hard at that moment.

Harry causes a distraction so Mel can bind Georgie. They try to keep indulging him in sweets, but Harry realizes he just wants someone to notice he’s sad about losing someone he loves. As Harry crouches down and tells Georgie he’s sad, too, Georgie’s soul reattaches. Jill walks in and takes Georgie to go be sad about Uncle Carter together. Georgie hugs his “Uncle Harry,” and I’m crying. There’s something about Rupert Evans with children that just consistently hits me in the heart. It always feels like such authentic affection, and I really love it.

Back in Safe Space, Harry and Macy run into each other. He tells Macy he wants to have a full life with her filled with love and family, which means he needs to age so they can start making memories together. Honestly, I think this might be my favorite of the Harry romantic speeches to Macy. The little relieved “oh” he lets out when she says she was going to say the exact same thing to him just makes me melt. I love the internal angst they’ve set up with these two this season because we’ve also seen them having healthy communication and growing closer.

“There’s No Reason We Can’t Open A New Window”

Ruby and Mel get a drink together, since Ruby was gone the entire time Mel was allergy-free. That was such a disappointing realization. As Ruby leaves “to go return some expensive lingerie,” she tells Mel she loves her. It’s clear it’s the first time.

After she gets back from England, Mel tells Ruby she’s been keeping a secret from her. However, she met Jill and her wife who were able to make a long-distance relationship work. Now, she has hope for them, too. She tells Ruby she loves her, too. It’s a truly precious moment.

However, the “I Love Yous” felt unearned. So much of their relationship has happened offscreen that the audience hasn’t been able to buy into why they love each other. I think they work as a couple. The show built up both Harry/Macy and now Jordan/Maggie really well. Unfortunately, Mel and Ruby don’t get that same buildup. For a show that prides itself on its representation, having the lesbian relationship offscreen is an issue.

“That’s What I Want”

Maggie and Antonio both got the psych internship. While they’re working, Antonio asks her out on a date, but she says she doesn’t really know if she’s seeing anyone. She gets a vision of herself dancing with Antonio. We know later that is her as Daisy. But she freaks out and leaves Safe Space, leaving her wallet behind.

That is what brings him to the house, allowing him to be knocked unconscious and then dance with Daisy. He seems to believe her later that it was just a dream, but that doesn’t quite make him the smartest person. Maybe Harry could do one last hurrah of wiping Antonio’s memory before he loses that power? Regardless, Antonio apologizes for asking Maggie out. She says he was being sweet, but she knows who she wants.

Maggie goes to Jordan’s gym to find him. Even though I know he’s in the Tomb, I still got excited for a second. Swan tells her she figured Jordan ran off with “that hot British lady.” Maggie goes straight to Abigael’s apartment and finds the symbols on the floor, telling her they’re both in the Tomb.

That’s where we end for this week, setting up the trip back into the Tomb next week. How are you feeling after this week’s episode? Follow us on Twitter @capeandcastle to share your Charmed 3×12 thoughts! Be sure to check out our site for more content.