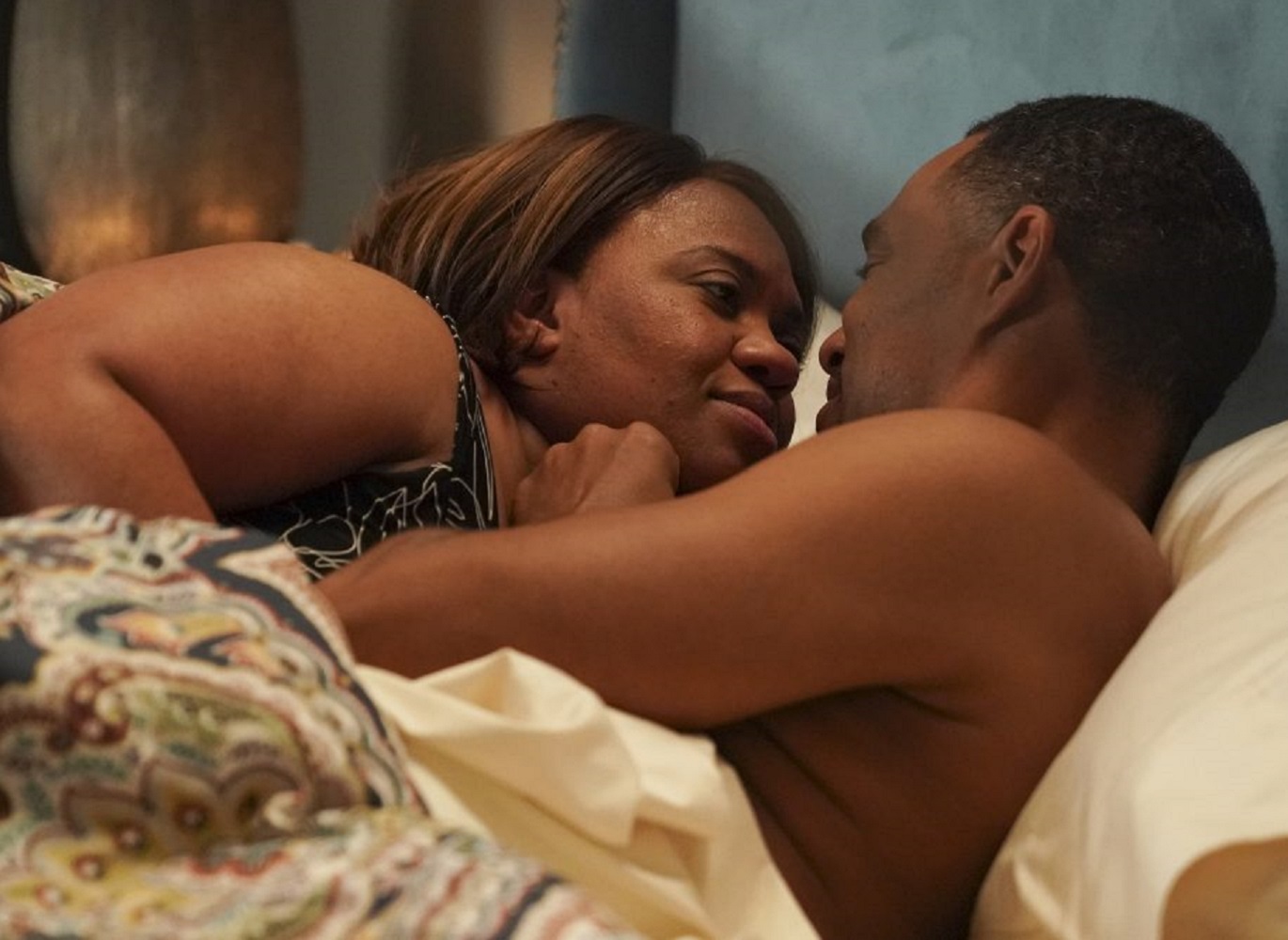 Where the last episode of Station 19 was a true ensemble effort highlighting every single character, this week is held down by the geniuses that are Jason George and Okieriete Onaodowan. They spent the majority of the episode treading water and just acting their tails off in what must have been miserable filming conditions. Keep reading for my Station 19 4×13 review!

Most of the episode takes place at the Black Firefighters Coalition of Seattle banquet, which is on a boat for plot reasons we’ll need later. During his speech, Chief Gregory gives a speech in remembrance of George Floyd and talks about how their existence as Black firefighters is a revolution. There’s some very pointed commentary in there, which is clearly meant to be about Dean’s lawsuit.

Shortly thereafter, Dean and Chief Gregory end up having a moment alone. They get into a discussion about what defunding the police actually means, and how it’s more a call to reallocate funds to more appropriate services. Before they can get too deep into it, Chief Gregory feels faint and straight-up swoons over the edge of the boat. Dean immediately jumps in after him. Ben sees them both fall over the edge. He tries halfheartedly to get someone’s attention, but then he decides he’s also going to jump into the water after them. In the pitch-black night. When no one knows to be looking for them.

In the water, Dean catches up to Gregory, who is not much longer for this world. Ben finds them. They try some rescue attempts, but Gregory dies pretty quickly. They look over at the boat, which I swear goes into turbo speed leaving them behind. From here, we get some flashbacks as to what is on both Ben and Dean’s mind while they are in the water.

“A Diagnosis Doesn’t Make You Less Of A Man”

Ben and Bailey take advantage of their empty house to finally have some alone time together. While they are being intimate, Bailey notices a growth on one of Ben’s testicles. He argues that it’s just a spermatocele, but Bailey basically leaps out of bed and says she is taking him to get it checked out.

They end up at a hospital on the other side of town with some unknown doctor, who confirms everyone’s worst fears. It is a tumor of some sort. The only way to know if it is cancer is to remove the testicle and do the biopsy. Ben wants to know if they can do chemo first, but the doctor says the surgery is their best bet to keep it from spreading.

On the drive home, Ben and Bailey talk about their next steps. Bailey realizes Ben is waffling on the thought of getting the surgery, and she instantly pulls out her phone to call Catherine Fox for a second opinion. Ben stops her and they have a discussion about the high mortality rate with Black men and cancer. Ben says he knows he has resources, but he’s still angry. Bailey starts talking about how much she has lost this year. If she lost him, she wouldn’t be able to function as a person anymore. Chandra Wilson has been making me cry since I was 15 years old, and this scene is no exception. 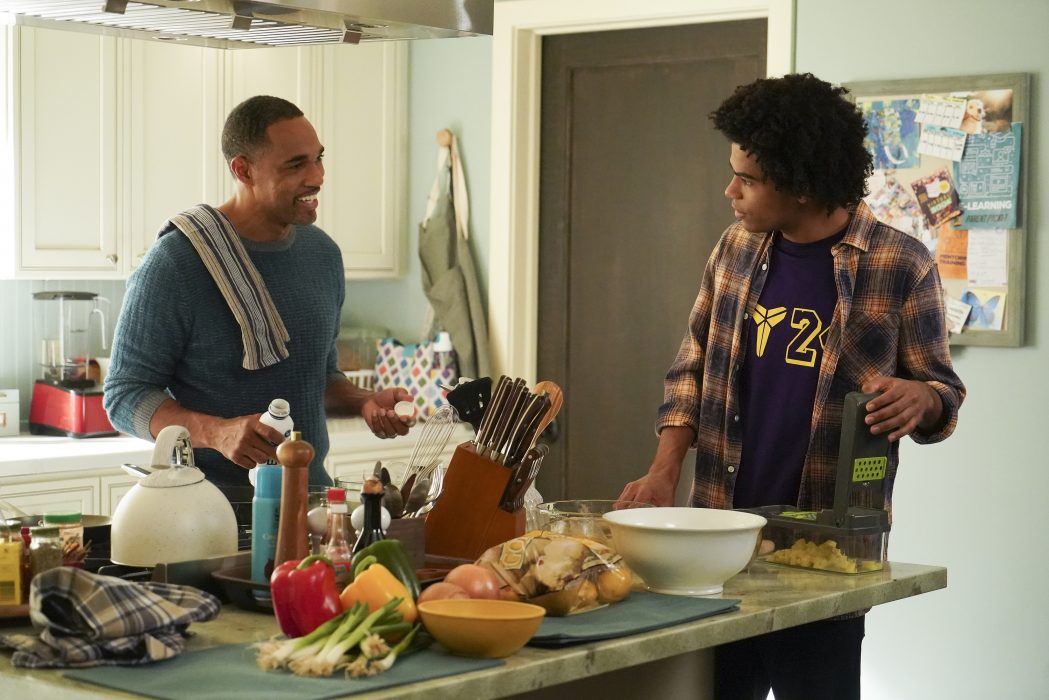 Back at home, Ben talks with Joey about the surgery. It turns into a discussion about whether Joey has ever considered going into medicine. Joey talks about how he’d never seen Black doctors in real life until Ben and Bailey, but medical school is still expensive. When Ben points out he and Bailey could help with the cost, Joey just gets this huge smile. The former foster care worker in me absolutely melts over Joey getting such strong support. Then he says Ben could be his teacher one day, and I turn into a puddle of tears.

“We Want To Be Your Family, Too”

JJ’s parents Petra and Henry Lau show up at Dean’s house, completely out of the blue. They just found out about their granddaughter and they are eager to meet her. Perhaps a little overeager, even if they have good intentions. They’ve not only invited themselves over to Dean’s house. They’ve also invited his parents for a little get-to-know-you hangout. While it is completely well-intentioned, I’m overwhelmed for Dean.

Dean’s parents arrive just in time to have takeout with JJ’s parents. They discuss the lawsuit, and Henry points out his family’s own negative feelings against the police. His grandfather’s store got burned down four times because he was Chinese. The family ended up moving back to Hong Kong, even though they were fully American. They had family to lean on, though, and Petra tells Dean they just want to be a part of his family, too. It’s honestly a very sweet moment.

Petra and Henry bring in armfuls of gifts for Pru, Dean, and his parents. Henry brings up the fact that he owns the company that essentially owns half of Seattle. They reassure Dean that they just want to be a part of Pru’s life. Dean’s mom says they’ll have to discuss it because they don’t want Pru being influenced by JJ’s poor life choices. Petra absolutely throws her daughter under the bus and agrees that JJ is a trainwreck. I almost feel a little bit bad for JJ with the way her own parents are talking about her.

“My Village Is Your Village”

The bulk of the episode is spent in the water, though. Dean stubbornly refuses to let go of Chief Gregory’s body, saying he won’t let “him sink to the bottom of the ocean like a mob kill.” At one point, Dean grabs for his phone, like it’s going to work after being submerged in water. Instead, the phone flies out of his hand like a slippery bar of soap.

Dean keeps saying they’re going to die, but Ben tells him they need to have a survivor’s attitude. He suggests they float on their backs and hold hands, just like sea otters do to stay together. My heart breaks a little when Dean turns him down, but they’ll eventually embrace their inner otters.

With nothing else to do but float and talk, that’s what we get. And it’s messy and raw and so well-done on both their parts. Dean is convinced he could have been the next George Floyd and Pru would have been completely alone. Instead, he got a second chance, and he’s going to die in the ocean. Ben says they’re not dying, and Pru wouldn’t have been alone. He praises Dean for being such a good dad and fighting to make the world a better place for Pru. Dean argues he’s reckless, but Ben says he’s righteous. Honestly, Ben might be the best character for giving pep talks since Coach Taylor from “Friday Night Lights.”

Ben tells Dean about his tumor. As Ben describes the cancer, Dean instantly makes the connection to Pruitt Herrera’s cancer and tells Ben to get the surgery. Dean tells Ben about the pep talk he got from Pruitt when he was considering giving Pru up for adoption. He tells Ben they’re family and he’s “being a dumbass for avoiding surgery for your ball cancer.” Ben argues back that Dean doesn’t realize he has family to support him, either.

Then amidst a slight scare over a shark attack that turns out to just be a jellyfish, Dean brings up the topic that makes me start screaming. He says he can’t die before he tells the only woman he wants to be Pru’s mother that he loves her. At this moment, I become the Michael Scott meme of him yelling “Oh my God, it’s happening.” Dean admits that he’s in love with Vic, and he hasn’t told her. I flail. There’s crying and screaming. It was not pretty, folks. Dean says they could have lived happily ever, “just me, Hughey, and Pruey.” Dean swears Ben to secrecy and Ben makes a joke about taking it to his grave. Both losing strength, they hold hands and float together like sea otters. I might have watched this entire scene on repeat.

Ben and Dean promise to take care of each other’s children if anything happens to them. Ben reminds Dean that Pru has an entire city. He calls out Dean for acting like he has to carry the weight of all Black Americans with his lawsuit. They can carry the weight together. Dean admits how tired he is, and it’s such a sweet moment. I love the moments where Dean gets to be vulnerable because Okieriete Onaodowan is so good with them.

Ben says he was always going to get the surgery. He just needed some time to adjust to the idea of it. They hear a boat nearby and start yelling for it, but again, it is pitch black. Dean finally reaches a point where he can’t hold on to Chief Gregory anymore and keep treading, so he reluctantly lets him go. Then Dean starts crying, and I join him in his tears.

We get a couple dream sequences as the hypothermia sets in for the men. Ben thinks about Joey’s med school graduation, where Joey gives Ben a shoutout and calls him the closest thing he ever had to a father. Dean pictures his mother, Bailey, and Petra all singing lullabies to Pru.

They continue to float together. Dean tells Ben that he shouldn’t have jumped in after him, but he’s glad he’s not alone out there. Ben starts singing Que Sera Sera because hypothermia will make you do crazy things. They promise one more time to look out for the other’s children if anything happens to them.

And then we’re on a beach. For a split second, I worry that we’re on the same beach Meredith has been on for most of this season of “Grey’s Anatomy.” But no, they’ve washed ashore. Bailey and Vic both come running over. Vic promises Dean she stayed with Pru all night because she didn’t want her to wake up alone in a world where he didn’t exist anymore. She tells him she loves him, too. The men get loaded onto gurneys, holding hands like the adorable sea otters they are.

How are you feeling after this episode? Did you also squeal at Dean’s confession about Vic? Did you just want to give Ben a hug? Follow us on Twitter @capeandcastle to share all your Station 19 4×13 thoughts! Be sure to check out our site for more content!