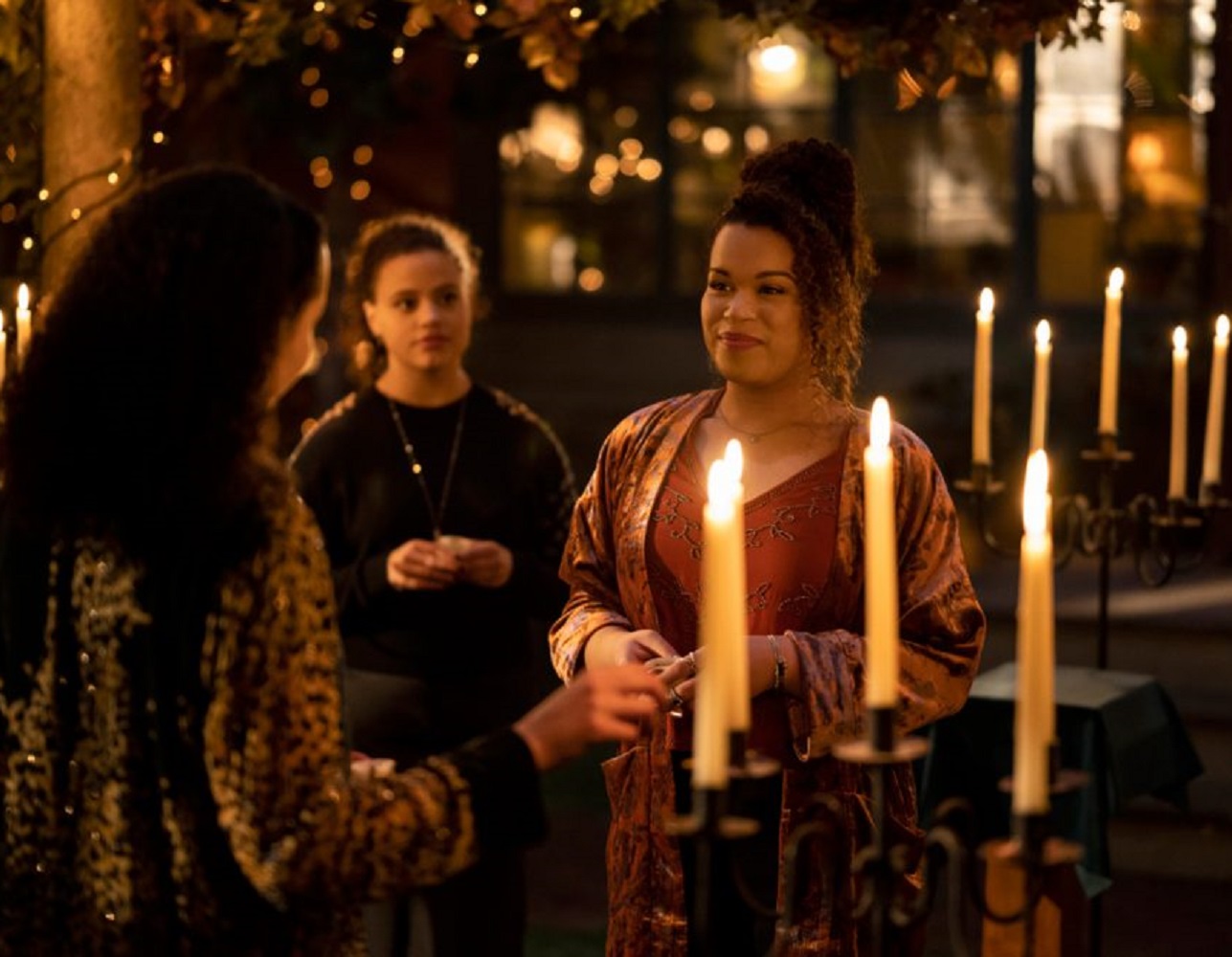 This week’s Charmed gave a much-needed reprieve from the sisters’ magical allergy. There were a lot of great things, along with a couple of truly infuriating things. Keep reading for my Charmed 3×11 review!

The Charmed Ones set off in search of a relic to cure their allergy. Through an exposition-heavy flashback, we learn the allergy was a security measure for the Tomb of Chaos. When the sisters put the Source into the Tree, it blew a hole in the Tomb and triggered the allergy.

The sisters find the relic, which is an egg. They try to figure out if they can just take it. Maggie worries they’ll set off some sort of booby trap. Macy, with her absolutely precious dorkiness, offers up her gas mask as a counterweight. If the poisonous mist comes back, she can hold her breath for one minute and twenty seconds. They swap it out and run.

A couple of days later, during Maggie’s first therapy session, Macy walks in and freezes time because the egg is ready. Macy stupidly suggests leaving a note for Maggie’s therapist, like that will explain how Maggie vanished into thin air.

As they prepare to say the spell over the egg, Maggie wonders why she’s nervous. Mel points out they don’t know the side effects, and Macy adds change is scary. They say the spell, which knocks them unconscious temporarily. After they all come to, they hug for the first time. The relief is practically rolling off of them. Harry walks in and Macy rushes over to him, saying she may never let go. He tells her she’ll “encounter no resistance” and they kiss. It is adorable and just made me smile.

The next morning, the sisters walk into the kitchen arm in arm to find Harry cooking breakfast. Macy and Harry kiss each other good morning as she asks if the French toast is a clue for his big surprise. Maggie praises him for being so romantic. Harry has never been so adorable and relaxed. I am a sucker for a guy head over heels in love. It is a good look on him.

They talk about how much better life is without the allergy. Macy has her status meeting about the legal clinic, and then she’ll be free for her surprise. Mel has a meeting to discuss a tenure track position. Maggie has her final internship interview. All of them are ready to rock their individual challenges.

“We Can Finally Build A Life Together”

Harry helps Aladria and Mo search for lost creatures using the Internet. I would take a spinoff of these three searching through the Internet because this might have been the funniest scene of the entire season. The Perfecti take off in search of a dog doing math because it has the Mark of Shoggoth.

Macy walks in, wearing the most stunning crystal-studded romper. She is completely breathtaking and Harry is nearly speechless. She says her meeting went great, so she’s free to leave now. He asks her to guess where they’re going. She correctly guesses Paris.

They snap a selfie in front of the Eiffel Tower to send to Mel and Maggie. Harry has dinner reservations for them. Tomorrow, he’s taking her to the Pasteur Museum so she can see the original rabies vaccine flask. They are just two nerds in love. They arrive at the hotel, only to find out they’ve been upgraded to the honeymoon suite. However, Frank and Viola, the old couple behind them, booked the honeymoon suite to celebrate their 40th anniversary. Macy and Harry quickly give them the room.

Out at dinner, Harry and Macy flirt excessively in the best ways. After a season where Macy has been so beaten down, it is exciting to see her get to be happy and in love. Harry brings up that they won’t age together, but Macy just wants to celebrate that they’re in Paris together. There is an absolutely stunning shot where the perspective switches to Harry’s view of Macy. It is a gorgeous shot of Madeleine Mantock. This dinner scene is my favorite of the Hacy scenes. As they walk back to the hotel, the clerk tells them they can have the honeymoon suite after all because Frank had a heart attack.

Harry and Macy go back home and he apologizes that things took such an unfortunate turn. Macy says that’s mortality, but she doesn’t want to ever watch Harry die. Harry points out he’ll have to watch Macy die because immortality is his curse.

“You’re Exactly What This Department Needs”

Josefina continues to search for a way to manifest her powers. Mel takes the opportunity to ask her about her plans for the future and suggests she consider going back to school. Josefina just wants to focus on her magic, though. 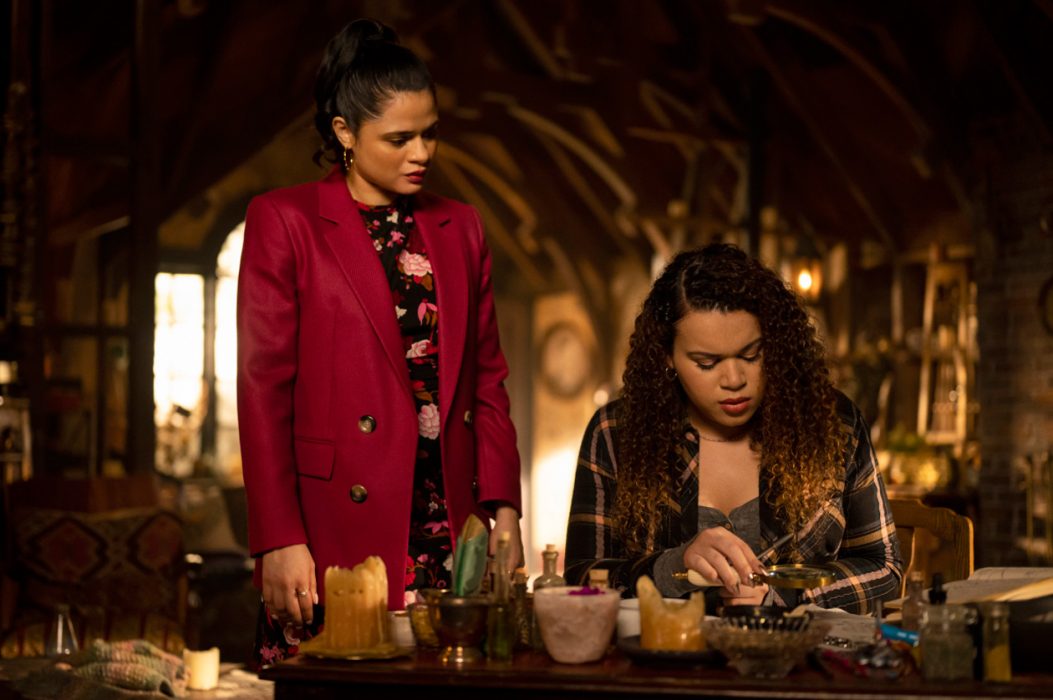 Mel gets Josefina to come to school with her, so Josefina can get a rare book out of the university library. While they’re walking around campus, the new dean walks over to Mel and offers her a tenure track job. I still don’t even know if Mel has a master’s or a Ph.D. Most of Mel’s academic storyline is completely baffling.

Josefina goes to get her book, but it can only be checked out to registered students. She pulls out her freezing potion to just take it as Mel admonishes her for using magic. She reluctantly agrees to let Josefina take the book for one day. As they’re walking out, two other professors in Mel’s department walk by and give her the cold shoulder.

“This Was Supposed To Be The Year Of Me”

Maggie aces her interview with Dr. Lawrence. He barely has to hear her results before he’s giving her the internship. She quickly catches up with Mel and they talk about how they’re all having the best day ever. Maggie keeps worrying that the other shoe is going to drop, though.

Soon after, Maggie gives Jordan a call to tell him the good news about her internship. Between the opening scene with the therapist and her phone call to Jordan, it seems like Maggie doesn’t know his curse was broken. There’s no reason she still has to keep physically distanced from him. She keeps talking about how she can’t have any distractions from her Year of Me, but she’s acting like she can’t be around him ever. If Maggie did find out about Jordan’s curse being broken, that’s a really important scene we should have seen, especially if they want to set up Jordan and Maggie as a romantic pairing. 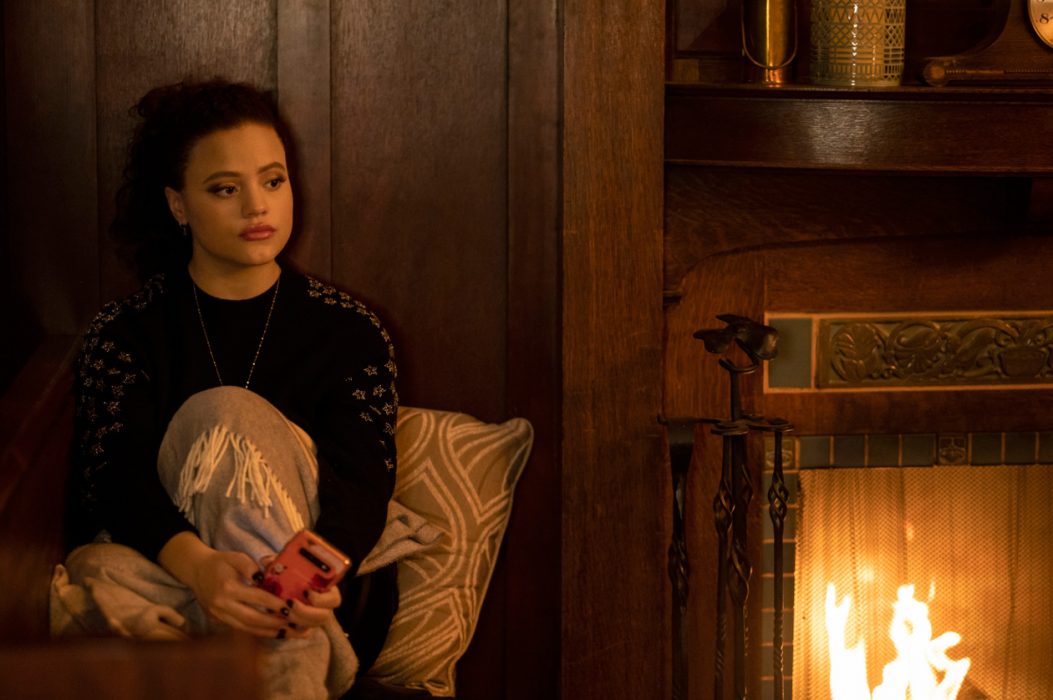 Maggie then finds out that Antonio was in a severe car crash. She realizes the only reason she got the internship was that Antonio didn’t. Back at home, the sisters realize all of their good fortune has been at the expense of someone else. Mel got tenure because the other professors got skipped. Macy got the honeymoon suite because Frank had a heart attack.

Before we finish the Charmed Ones’ storyline, we need to address the mess that is Abby. I really struggled with this storyline this week.

Abby’s opening scene is a very vivid depiction of her demon form slicing across her arms. She breaks into the Charmed Ones’ house before waking up as herself. The next day, Abby asks Jordan to help her bind her powers. She is desperate to stop her demon side. Her arms are a mess of cuts and wounds. She explains that only a “human of benevolent, merciful heart” can perform the spell. If he does it, she will be completely without powers. He agrees to help.

The show dabbled with self-harm imagery in Macy’s season one storyline, particularly with the Evil Sight. It wasn’t as explicit as Abby’s demon form, and it was handled a lot better. Now, they have the villain of the show harming herself, which sends the message that only bad people hurt themselves. In previous episodes, they had Mel flatout tell Abby to kill herself. In this episode, they’ve escalated to vividly showing Abby harm herself. I’m blown away by the irresponsibility of this storyline. Regardless of whether Abby is a good character, the content needs to be treated with a lot more delicacy and nuance. It feels like they’re using self-harm as a shock factor.

There is a reason mental health professionals advise against depicting self-harm. It is extremely triggering for those who struggle with self-harm to see it. I honestly cannot figure out how this storyline could be redeemed. This isn’t just a bad story. It’s hurtful.

Let’s get back to the Charmed Ones. Just as the sisters figured out the side effects of the egg, Josefina has finally gotten her powers. She can manipulate nature. It’s honestly a really cool power.

The sisters tell Josefina they have to put back the egg, even if that means that she might lose her powers. She conjures vines to tie them up and says she’s waited all her life for her powers. They don’t know what it’s like to feel powerless, according to her. I mean, they were powerless for half of season two, but that’s a lot of continuity to remember this week. Mel eventually talks her down, saying her real power is her passion to help others.

The Charmed Ones tell the Perfecti they need the allergy back, much to their confusion. The Perfecti think the Charmed Ones should just enjoy what they have. Mel says that kind of thinking is completely antithetical to their beliefs. They can’t succeed at the expense of others. Mo tells them to put the egg back, and that will likely reverse the allergy.

Josefina and the sisters go back to the cave. The bad news is the allergy comes back. The good news is Josefina’s powers were not tied to the egg, so she’s able to conjure some vines to build a bridge and get them out after a slight earthquake is triggered. 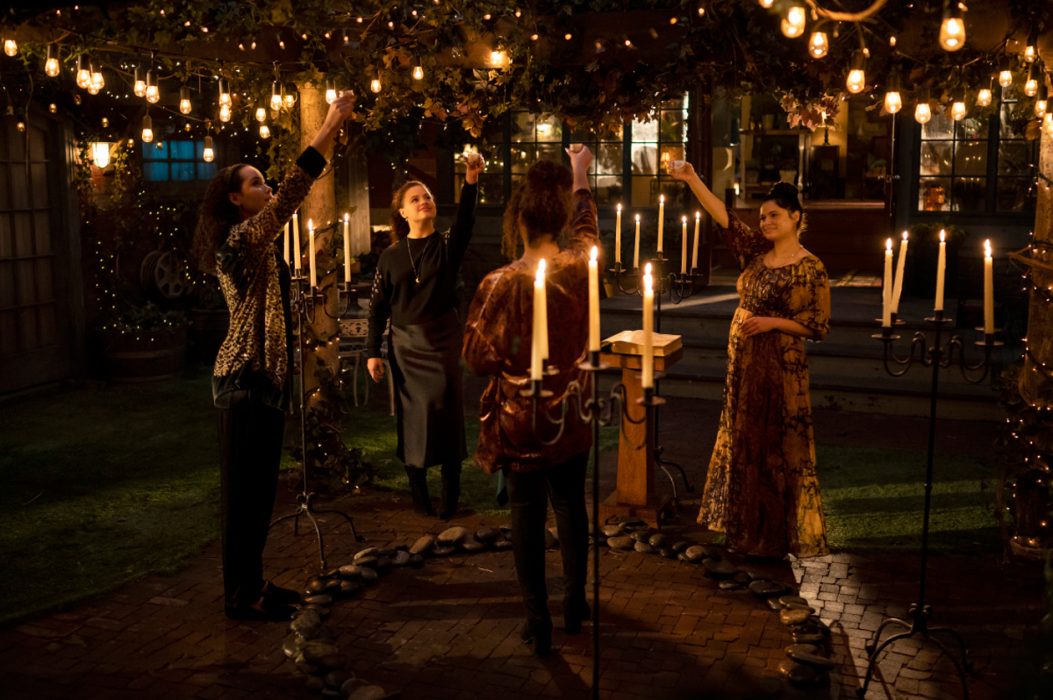 At home, the witches do a witchual to further manifest Josefina’s powers. It’s an incredibly touching moment where they celebrate Josefina taking her place as a witch. Of the non-Hacy moments of the episode, this scene is my favorite. Unfortunately, Josefina then breaks my heart and says she’s going back to Puerto Rico. She presents the Book of Shadows to Mel, but it’s confusing because we had the inverse of this scene two episodes ago with Mel showing Josefina the Book. It’s just another example of confusing continuity. I guess they’re trying to show that Josefina has continued to add to the Book, but it’s playing like Mel has never seen it. I am just going to focus on the touching family moment.

Macy waits for Harry, who tells her Antonio and Frank are both going to recover. Harry reassures her that she did the right thing by reinstating the allergy. Macy asks what this means for them. Harry says he could become mortal, but we don’t get Macy’s reaction.

The true cliffhanger for this week is what happened to Abby and Jordan. Somehow, during the ritual to bind Abby’s powers, she and Jordan ended up in the Tomb of Chaos.

This episode was a mixed bag. I loved the family moments and almost everything to do with Josefina. Naturally, I loved the Hacy storyline and the utter romance of Paris. Maggie’s storyline confused me at times. The Abby mess and the ongoing issues with continuity were the major detractors that kept me from loving this episode.