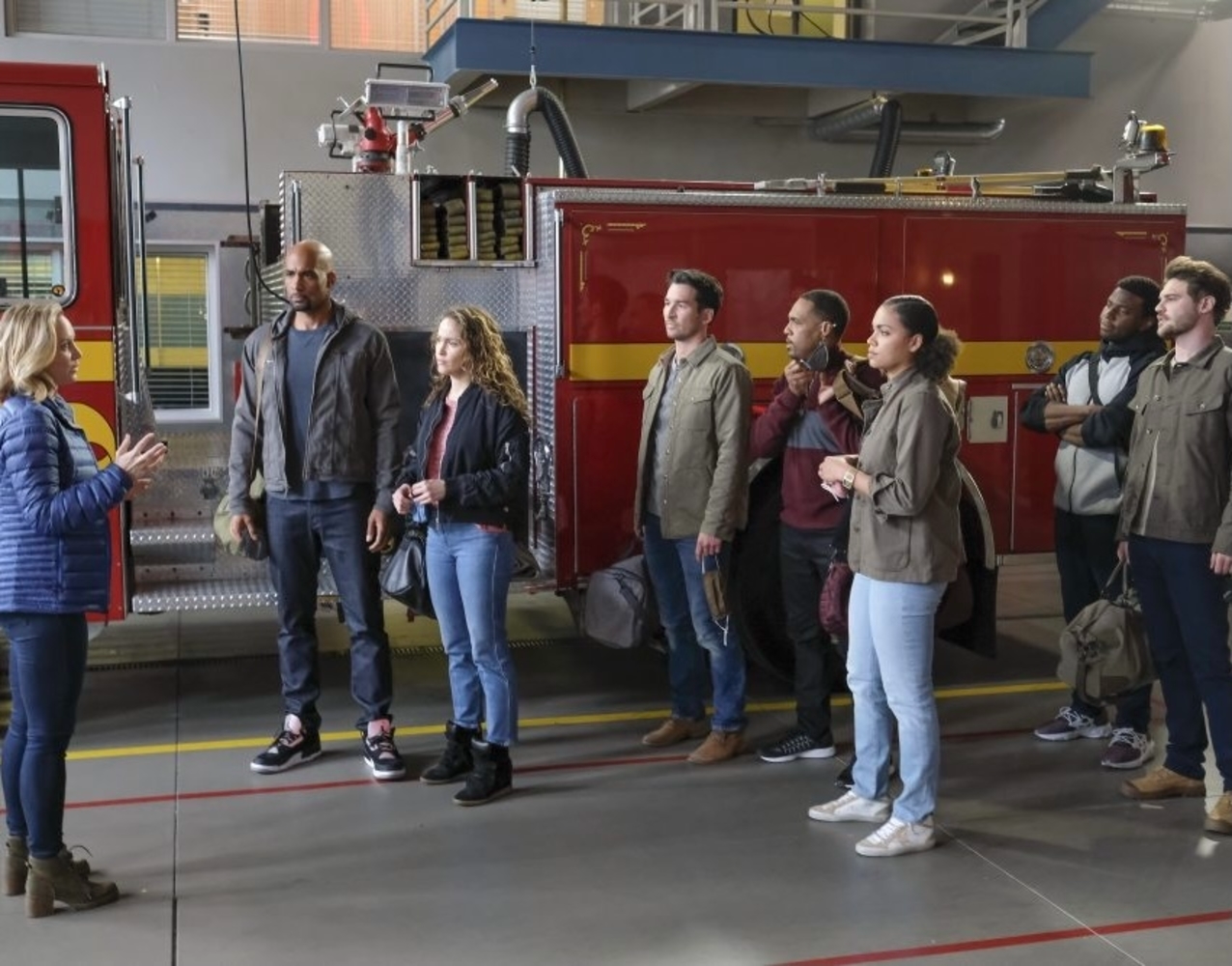 I have been putting off writing this recap because no words can do this episode justice. It is quite simply the best episode of television I have watched all season. In a week that saw the verdict handed down in the Derek Chauvin trial, the episode focused on how every character responded to the George Floyd murder. There’s no way the writers could have known when the episode would air, but the real-world parallel made the episode hit even harder. It’s raw and authentic in all the best ways. If you haven’t watched the episode, please go do that because my words will be a poor excuse. But if you’re so inclined, keep reading for my Station 19 4×12 review!

This episode is not necessarily focused on moving the plot along. There is no big emergency, no major catastrophe. The action is internal and moves forward through each character’s interaction with grief counselor Diane, expertly played by Tracie Thoms.

Warren is the first character to seek out Diane. He goes in under the guise of asking how she can possibly do her job as a Black woman in that moment. She turns it around and asks how he does it. He tells her he pushes aside his pain and does what needs to be done.

The focus of his conversation is on the emotional energy he spends existing as a Black man, when he would rather spend that energy on his marriage or parenting. He tells his sons to respect the authority of the police, just so they can get home safely. But then he sees Dean with his lawsuit and he knows that Dean is right. And in a week that also saw the murder of Makhia Bryant, the idea of parents teaching children to de-escalate a situation so they aren’t killed by adults is doubly heartbreaking. Jason George absolutely nails the vulnerability and frustration in this moment.

“I have the power to make sure that everyone can breathe”

Maya comes in to check on Diane and see if anyone has talked to her. Diane ends up getting Maya to speak about her feelings, too. Maya talks about how she was taught that racism was essentially over because of the Civil Rights Movement. She’s embarrassed by the education she’s received. She doesn’t know how to solve these problems because she’s still learning about them herself. Diane compares it to the education she received, or more accurately, didn’t receive about the Native American genocide. If Maya uses that shame over not knowing things, she can do better with her actions from here on forward. Danielle Savre does great with portraying the confused, frustrated helplessness I know I personally felt at this moment in time.

Maya brings up a story about her friends sitting in silence with her after particularly brutal training sessions as a kid. Her instinct is to quietly sit alongside her Black team members, but she has authority now. She can advocate for them. She can call out injustices when she sees them. And even though she knows it may jeopardize her career, she can march alongside them in the protests.

“Why are we so invisible?”

Diane seeks out Travis, but he said he wanted to let the Black firefighters go first. She gets him to go ahead and speak. Travis says someone spat on his mom at the grocery store the day that George Floyd was murdered. He didn’t talk about it because it didn’t feel big enough, and he apologizes for bringing it up. She brings up the rise in anti-Asian hate crimes since Covid started. Travis brings up some examples, but he says it feels like nothing compared to how the country treats Black people. Diane tells him that it is gaslighting if anyone tells him to be okay with the things happening to his community because there are worse things happening to someone else. 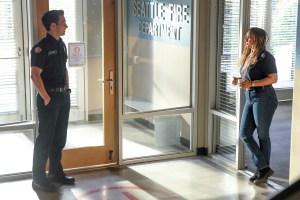 I truly appreciate the way the show is addressing the numerous communities being oppressed. They all need to be acknowledged before anything changes. Jay Hayden nails this conversation and my heart was breaking for him with every line.

Andy’s conversation centers around how her marriage to Sullivan changed her viewpoint. She talks about how she dealt with microaggressions growing up, but she passed for white, so she was mostly treated fine. She feels betrayed after seeing the video. Andy wonders why she had to fall in love with a Black man to see the realities of the world. 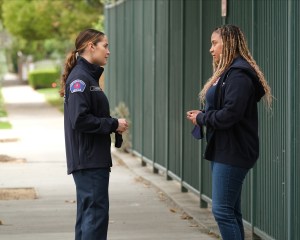 Andy brings up the fact that cops have been a part of her life since she was a kid. They were her dad’s friends. They were always the good guys. But now, none of her dad’s friends are calling out the police. Andy talks about how she always used to double-think that there was rampant police brutality, but the people she knew personally were the good ones. Diane gently pushes back and says Andy’s comfort and the comfort of everyone else has been part of the problem for years. Jaina Lee Ortiz is fantastic with portraying her frustrations and her sense of betrayal.

“Do you really have to look for proof that we’re people, too?”

Vic goes in under the pretense of asking how to become a therapist, in case she needs a backup plan. They talk about how neither of them can think about anything other than the video. Where earlier Maya and Andy were talking about their frustrations over just now waking up to everything, Vic shares her frustrations for what took everyone so long. It’s a great parallel that subtly shows the division in the firehouse since even the last episode. She talks about how many white friends have reached out to check on her and how it’s all centered in their guilt. Then Vic talks about the news coverage. Just as egregiously as the negative comments, there’s everyone pointing out all the good things about him, like they have to work harder to justify why he deserved to live.

This scene is Barrett Doss doing what she does best. It starts off with the gentle humor about her background in musical theater. She’s bantering back and forth with Tracie Thoms and I’m laughing because I will always laugh with Vic. But then without even realizing it, I’m sobbing because no one does that emotional turn better than her. It’s never disorienting. It’s always authentic and beautiful. And if not for the emotional powerhouse that was Dean’s scene later, this conversation would have been my favorite.

“I’m afraid to talk to anyone right now”

All episode, we’ve seen Jack avoiding Travis, Vic, and Dean while he listens from a distance. He tells Diane he’s afraid to talk to anyone because he doesn’t want to say the wrong thing. He starts off by saying, “I know I’m not racist, but,” and that’s where Diane stops him. She tells him the culture is rooted in white supremacy, so he needs to be able to own that. He says he’s damned no matter what he says. He tries to stand up for some police officers because they can’t all be racist.

Diane says that while he doesn’t have hatred in his heart, that isn’t enough anymore. She brings up the immense amount of white privilege that he has, and he acknowledges that he knows that. He just doesn’t know how people can decide the entire institution of the police force is evil, when they need the police to do their jobs. She proceeds to give him an education on how the 13th Amendment essentially made slavery legal as long as it is used as a punishment. She points out the racial disparities in the prison population and says that when Jack was living on the streets as a foster kid, he probably committed some crimes to survive. When Jack made a mistake, he got to learn from it. Lots of Black children don’t get that luxury. If he doesn’t know what to say, then he should start listening.

This was probably the hardest scene to get right. There was a lot of history in there that could have easily come off as preachy or awkward. Tracie Thoms never feels like she’s reading from a textbook. And Grey Damon is frustrated, but he’s open to hearing this information. Where Maya’s struggle is that she’s inclined to sit back and listen, Jack is the exact opposite. And there’s definitely some gender politics to be addressed there, too, but Jack’s openness is what makes him endearing here.

When Dean overhears Sullivan letting a dad bring his kids into the station because he wanted to be able to show his kids good Black men in uniform, Dean searches out a hiding place. He sniffles and fights back tears. Diane looks at him and cries, knowing about his own encounter with the police. While he’s in the room with her, she doesn’t say a word. Their silence says more than any dialogue could ever say. It showed that sometimes, even therapists don’t know what to say. Sometimes, the best thing a therapist can do is provide a safe place to let someone have a moment.

Okieriete Onaodowan and Tracie Thoms can both deliver a monologue like no one else, but the work they do with this silence is breathtaking. Dean takes a moment to collect himself. And then he nods his head, says “thanks,” and leaves the room.

Similar to Dean, Sullivan is not at all interested in speaking to Diane. Throughout the episode, we see his quiet rage. Eventually, Diane finds him on her way out. He talks about how he is exhausted by everyday life, and he’s tired of explaining that to people. People treat him differently as a Black man, and there’s nothing he can do to change people’s perceptions of him. He’s scared and tired. Sullivan doesn’t frequently get these vulnerable moments, but when he does, Boris Kodjoe is always excellent.

Towards the end of the episode, Andy finds Sullivan and he talks about how he almost convinced Dean to quash his lawsuit, just for a promotion. His demotion has humbled him and made him question his goodness. Andy says goodness is about growth. It’s about how he takes his mistakes and learns from them. These are the moments that win me over to the Andy/Sullivan relationship. These quiet moments where they help make each other better. 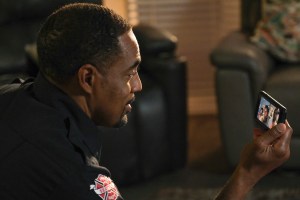 We get a scene with Warren talking with his kids about how they want to march in the protests together. Jack goes to find Vic, Travis, and Dean to ask if he can go to a protest with them. Dean tells Jack that if anyone comes after the three of them, it’s Jack’s job to block that. Jack smiles and Dean confirms he wasn’t joking. It’s a lighthearted moment, but it also displays the tension between Jack and his friends. We end with the entire station going to protest together, along with Warren’s children and Carina.

The story behind how this episode came together was a really interesting one, since all of the actors and writers on the show got input into their scenes. Which of the character’s scenes was most impactful for you? Find us on Twitter @capeandcastle to share your Station 19 4×12 thoughts. Be sure to check out our site for more content!