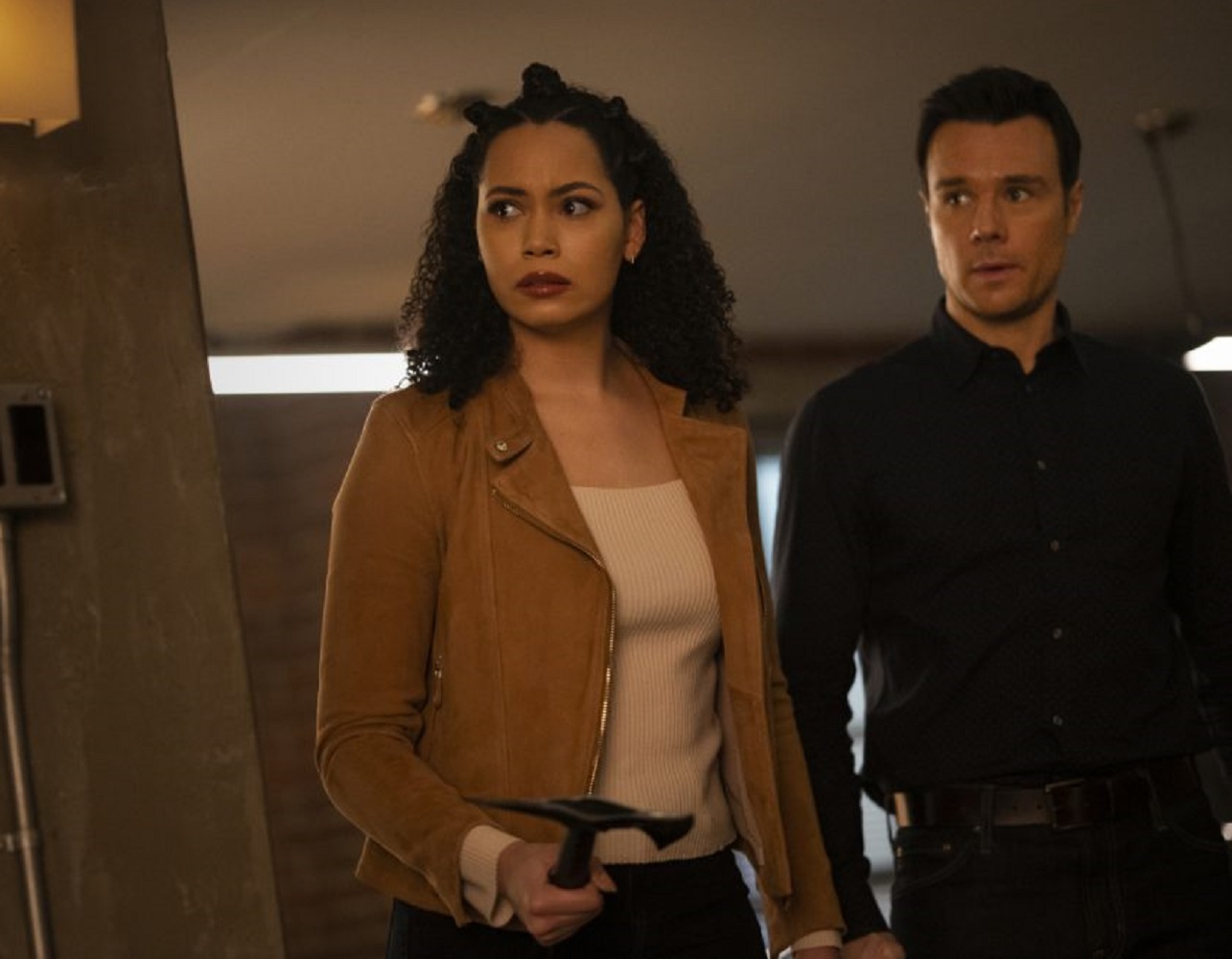 This week’s Charmed was filled with romance, intrigue, and action. It was also the best episode of the season. Keep reading for my Charmed 3×10 review!

Macy chases an invisible worm creature through an alley. The scene feels straight out of ‘Buffy’ in the best ways. She has this badass bandolier with a dagger holder I desperately want, but she uses her for spells and I could store pens. It’s not the same. She can’t get close enough, so she has to telekinetically toss the dagger. Unfortunately, she gets some worm goo on it, which will become very important later.

Back in the Command Center, we learn the sisters have vanquished 183 rift creatures in the past week. Harry finagled the Witch Board to detect openings. The sisters are going after them in rotation. Maggie is up next for a rift in Germany and she is clearly exhausted. Macy tells Harry she might need the rotation off. A moment later, Maggie bounces out, tosses a “Guten tag bitches,” and hops through the portal, leaving behind her marble.

Harry tries to heal Macy’s injured shoulder from a distance, but he triggers the allergy. Macy snaps, as he says he just wants to help. She says it’s just getting hard to have hope things will get better. She decides to go home and tend to her wounds.

Josefina finds Mel upstairs to tell her about a new binding spell she made called the Bruja’s Ladder. It combines brujeria magic with knot magic from the Book of Elders. She wants to try it out on Mel’s next rotation, but Mel doesn’t think she’s ready to go in the field. However, when Harry learns about the Bruja’s Ladder, he is impressed and thinks she might be worth a shot. It’s a nice reversal to see Mel more hesitant and Harry pushing her to take more chances. It’s real growth from the first season for both of them. Unfortunately, Mel says when they started, Harry actually knew everything and could help them. It’s clear it came out wrong, but I still hurt for Harry there. They’re saved by a new rift Mel has to address.

Mel quickly vanquishes the creature as two robed beings descend from the sky and emit a creepy melodic tone. She opens the portal, but they follow through it. Harry and Mel get them contained, but then Harry stupidly steps right next to the forcefield and Mr. Random reaches through to Harry’s forehead. Harry collapses and Mel uses the Bruja’s Ladder to tie them to the upper railing. She grabs a healing potion and braces herself for the inevitable allergy blast, but there’s no blast when Harry touches her wrist. Somehow, his powers are gone.

Josefina is excited to find out her spell worked. She instantly wants to get the Randoms to activate her powers. Mel very rightly points out there is no reason to trust these people. She consults the Witch Board and sees that Maggie and Macy are both in trouble. Josefina stays with the Randoms while Mel goes to Maggie and Harry to Macy. He runs out of there with such speed because he can finally touch Macy for the first time in months. He’s clearly worried, but I don’t think Harry has ever moved that quick.

“The Most Powerful Thing We Can Do Is Ask For Help”

In Germany, Maggie foresees a Grudge-like creature telling her to stop fighting. She puts her hand against her chest and uses her calming powers on herself. Her face completely changes, like she’s taking a hit off a drug. Eventually, she finds the creature. She whips out her baton, and the creature mimics her. A truly epic fight ensues. Sarah Jeffery had to learn both sides of this fight, and it may be the best one the show has done. As it gets closer, Maggie realizes the creature has her face. She attempts to use her powers on herself again, but it doesn’t work.

Mel comes through the portal and spots the baton on the ground. Grudge Maggie is hunting Maggie. Sarah Jeffery is playing this part almost animalistically, and it’s terrifying. Mel calls Maggie’s phone and she tells Maggie to yell for help. First, Maggie says she can’t, but then we hear her scream.

Grudge Maggie found Maggie and we see her earlier premonition come to fruition until Mel thumps it upside the head, telling Maggie it’s a doppelganger. It can’t hold its form against two people. Maggie transforms her baton into a spear, wisely saying “desperate times call for pointier weapons” and vanquishes it. 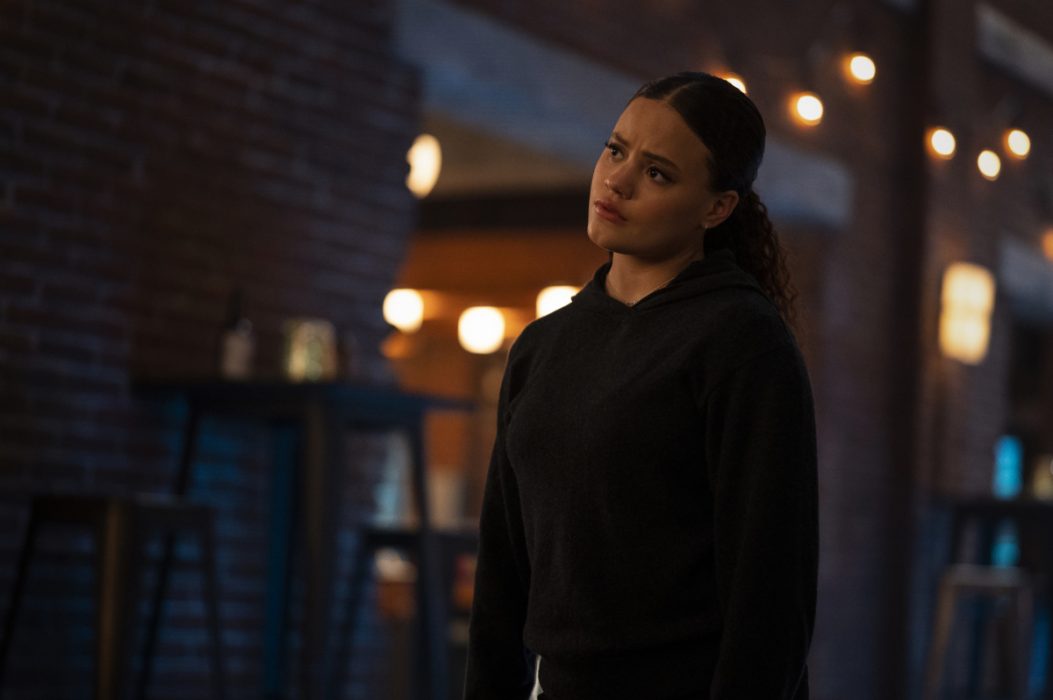 Maggie and Mel take a moment to talk about how exhausted they both have been. Maggie admits she’s used her powers to self-medicate. Between school and being a Charmed One, she’s overwhelmed. Mel gently admonishes her for not telling her and Macy. She tells her the most powerful thing she can do is to ask for help. They have such a beautiful conversation about how women are constantly discouraged from asking for help. That’s doubly true for women of color, and I love the way the show has addressed this. By the end of the episode, Maggie schedules a therapy appointment and I have never been so proud of a fictional character.

“I Will Never Stop Fighting For You, And For Us”

At home, Macy passes out from her injury. Harry runs in, breathless and complaining about how awful running is. I’ve never related to a statement so deeply. He finds Macy and tries to heal her until he remembers his powers are gone. He grabs a healing potion and uses that. The way he’s caressing her forehead and pleading for her to be okay is a great callback to the season 2 premiere. Macy gasps and wakes up. She initially crawls away until she realizes he’s already been able to touch her. He tells her to go with it and they have the most tender kiss. They’re both smiling and laughing softly. I screamed. There was a flailing victory dance from my couch.

Harry and Macy sit together, with her wrapped in his arms as he lovingly strokes the back of her hand with his thumb. Harry says he wants to live in that moment forever, and I do, too. All the stress that Macy has had for the last three episodes comes to a head and she cries, saying this was what she needed. She’s tired of fighting for a world that doesn’t fight for people like her. He reassures her that he’ll always fight for her and for them. Then he just lovingly kisses her forehead and she sinks back into him. As the camera pulls back, you can see him kiss her forehead again like he can’t stop. This moment was so soft and tender. Madeleine Mantock and Rupert Evans were sheer perfection.

“The Benevolent Classification And Containment System”

Josefina stays with the Randoms. She asks them to activate her powers again as they just stare. With absolutely no evidence to support this conclusion, she decides they weren’t trying to hurt Harry. They let out another melodic tone and it activates the tablet. For some reason, she decides that is a good thing and releases them from the Bruja’s Ladder. 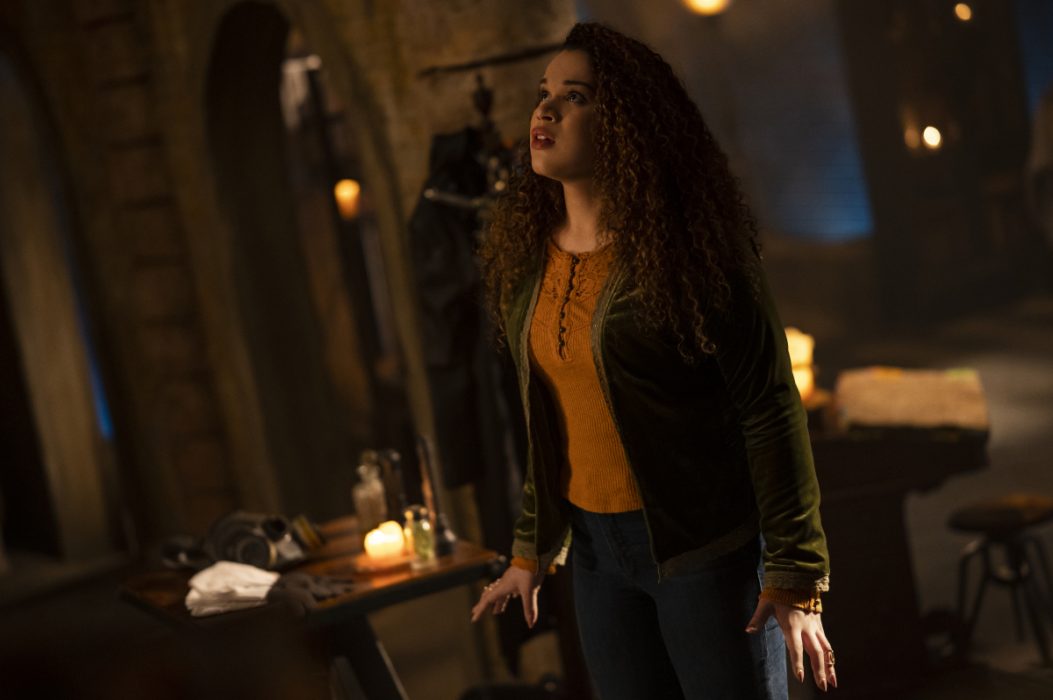 Harry and Macy arrive back at Safe Space hand in hand. Macy mentions figuring out how to get Harry’s powers back, but that doesn’t seem to be a priority for him. Then they see a sea of unconscious people around them. They see the Randoms doing the forehead thing to everyone. Macy wants to go after them, but Harry rightly suggests they form a plan first.

Mel and Maggie find Josefina unconscious and alone in the Command Center. A scream rings out and Mel leaves Maggie with their cousin. She finds Harry and Macy. She proposes binding them with the Bruja’s Ladder while Macy axes them. Seems brutal, but why not?

Now awake, Josefina tells Maggie they can’t kill the Randoms or the world is screwed. They rush upstairs just as Harry is offering himself up as bait. Mel starts the Bruja’s Ladder spell, but Josefina says they’re just touching things to understand, so they’re not dangerous. The dozen or so unconscious people might disagree with her. She asks Mel to trust her. Before they can talk more, the worm goo from Macy’s dagger at the beginning of the episode has dripped and transformed into a giant worm creature. The Randoms hum to reopen the Tomb of Chaos and send the creature back.

The Randoms are actually the Perfecti, two beings named Aladria and Mo. They built the Tomb, which is actually called the Benevolent Classification and Containment System for Rampageous Beings and Unpredictable Objects in Fifth-Dimensional Space-Time, which is not as catchy. They restore Harry’s powers, meaning he can’t touch Macy anymore.

Down in the Command Center, Aladria and Mo talk with the Charmed Ones while eating some cheeseburgers. Mo sassily slurps from his soda. He hasn’t said a word yet, and I want to keep him forever. I just want him looking judgmentally whenever they have a stupid idea. Basically, the Perfecti are the combination of all magic into two utterly perfect beings. When the magical world was in chaos, they rounded up all the rogue creatures into the Tomb of Chaos, a name Mo really likes. They tell the sisters they should have read from the tablet months ago. The Perfecti offer to take over the rounding up of creatures, and the Charmed Ones excitedly accept their help. They can also cure the allergy, and hallelujah for that.

Macy bakes cupcakes while she waits for Harry to return with flour. He orbs in with a bouquet of flowers, as well as a bag of flour, just like the romantic dork he is. My love of this particular pun-based romantic gesture goes all the way back to “Stranger Than Fiction.” He smiles as he says how nice it was to be able to be close to her again. She admits how scared she was when he was mortal because she realized she could lose him. He says the first time he didn’t have worries about having to live without her was when he didn’t have powers. They decide to focus on curing the allergy first, and he jokingly asks when the “bloody cupcakes” will be done. It’s such a sweet scene with just a hint of angst. So, it’s basically my perfect scene.

Upstairs, Josefina and Mel talk about Marisol. Mel assures her that Marisol would have seen her as a witch. Josefina tells her that the Perfecti aren’t able to activate her powers, and she seems discouraged. Mel tells her she doesn’t need to prove to anyone that she’s a witch. She asks for Josefina’s help with finishing the new Book of Shadows. Melonie Diaz and Mareya Salazar have a great rapport with each other. I really want Mareya to stick around for a while. I’m also desperate for a scene between Josefina and Macy. 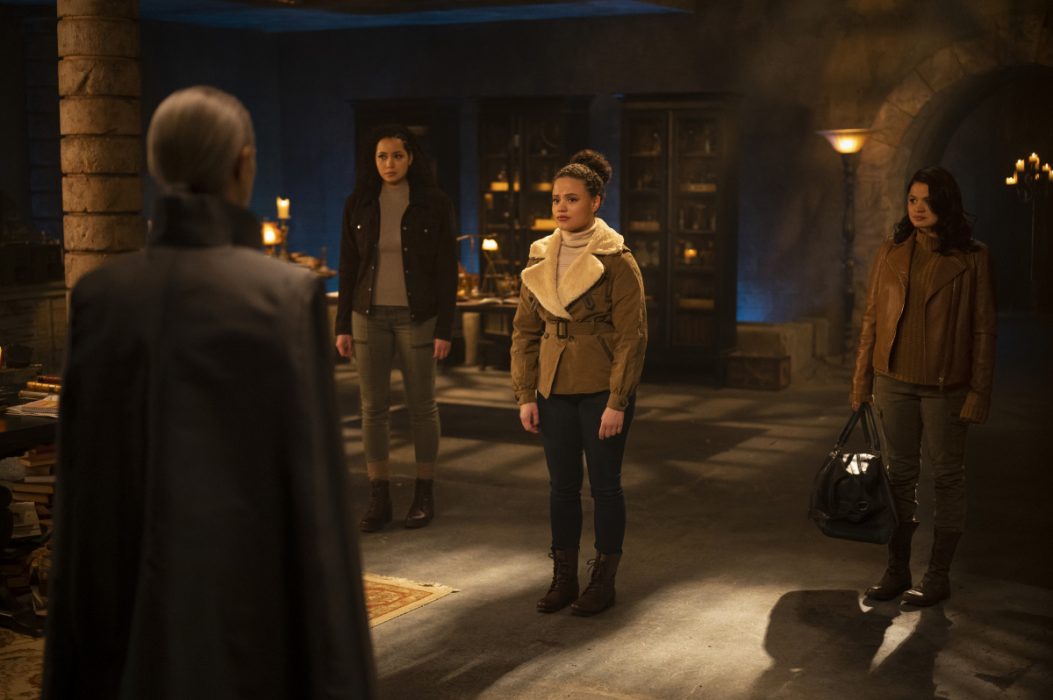 In the Command Center, the Charmed Ones meet Aladria and Mo to go somewhere to cure their allergy. The Perfecti warn the side effects are unknown and could kill the sisters. They are willing to do it, though. I still don’t trust the Perfecti. They walk through a portal and we end there.

Are you skeptical of the Perfecti? Was the Hacy kiss everything you wanted? How proud are you of Maggie for asking for help? Follow us on Twitter @capeandcastle to share your Charmed 3×10 thoughts! Be sure to check out our site for more content!