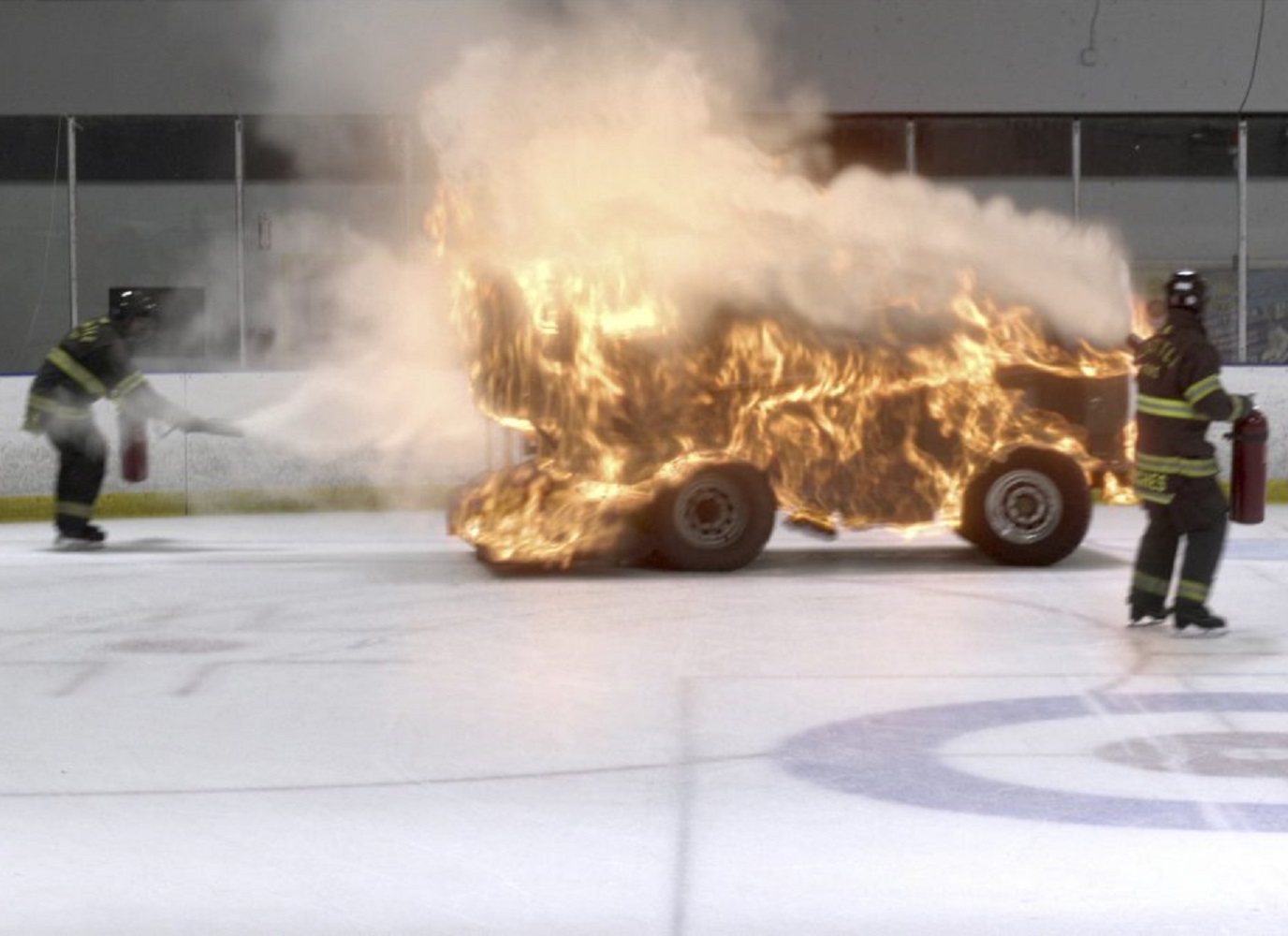 This week’s Station 19 is the series at its absolute best. We get a semi-wacky emergency, a heartwarming emergency, and character growth. Then it tees us up to an emotional gut-punch of an ending. Keep reading for my Station 19 4×11 review!

The episode begins with a montage of everyone getting ready for work. Of most importance, Miller is leaving Pru with his mom for the first time. Carina is giving Bailey her resignation. Plus, Emmett shows up at Travis’s with preemptive apology pastries because his dad is going to the station. Vic and Travis try to warn everyone, but he’s already there by the time they arrive.

That’s right, we get the reappearance of Dixon in this episode. In the space of about two minutes, he asks if Maya is keeping “mother’s hours” and he recommends she “keep a muzzle” on Miller. Oh, and he makes fun of Sullivan for his demotion. Thankfully, he quickly leaves.

In the locker room, Jack makes a semi-confusing comparison between Dixon and a video game boss. I don’t know if that analogy was supposed to make sense because I don’t play games at all. Vic then teases Travis about his thing for Emmett. She recommends Emmett as Travis’s Covid-safe sex buddy and says she would get some “disease-free dopamine” if she could. And once again, I am so glad they didn’t drag out the fight between Vic and Travis. I need their friendship so much.

“We’ve Trained For This…We Have?”

In the first of this week’s emergencies, I have two words for you: Flaming. Zamboni. That’s right, an elderly man named Lloyd jumped off a Zamboni just as it caught fire. Now, he’s laying there injured while the Zamboni goes in circles around him. Maya assures his wife Susie they’ve trained for this as Travis asks if they have. This is followed closely by Travis slipping and sliding on the ice as he and Vic take the stretcher to Lloyd. It’s a great week for Jay Hayden’s comedic stylings. They narrowly avoid getting hit by the Zamboni as they take Lloyd off the ice.

With Lloyd safe, the only thing left to do is address the flaming menace. Maya has the team standing on the side of the rink with fire extinguishers, hitting it whenever it rolls by. While ineffective as a method to get the fire out, we get some nice bonding moments between the teams.

On one side, Jack and Vic reminisce about their childhoods. Jack had a foster father who got him into hockey for a bit. The best part was after practice when they would get soft pretzels and talk in the warming room. Vic remembers chatting with her dad at his restaurant counter while he made pierogi filling. She asks Jack if he’d rather have no dad or Emmett’s dad. He soundly says as someone with no dad, he would pick no dad. The conversation goes back and forth between emotional and funny in the best ways.

On the other side, Sullivan and Travis talk about how useless they feel. Travis says he hasn’t been this useless since he was at a straight speed-dating event. And again, I cackled so hard I had to pause my recording. Travis calls Sullivan “probie” for the first time and then quickly asks if he can do that. Then he proposes “Sully,” instead. Sullivan responds with such a withering stare that I flinched. I laughed first, but then I flinched. 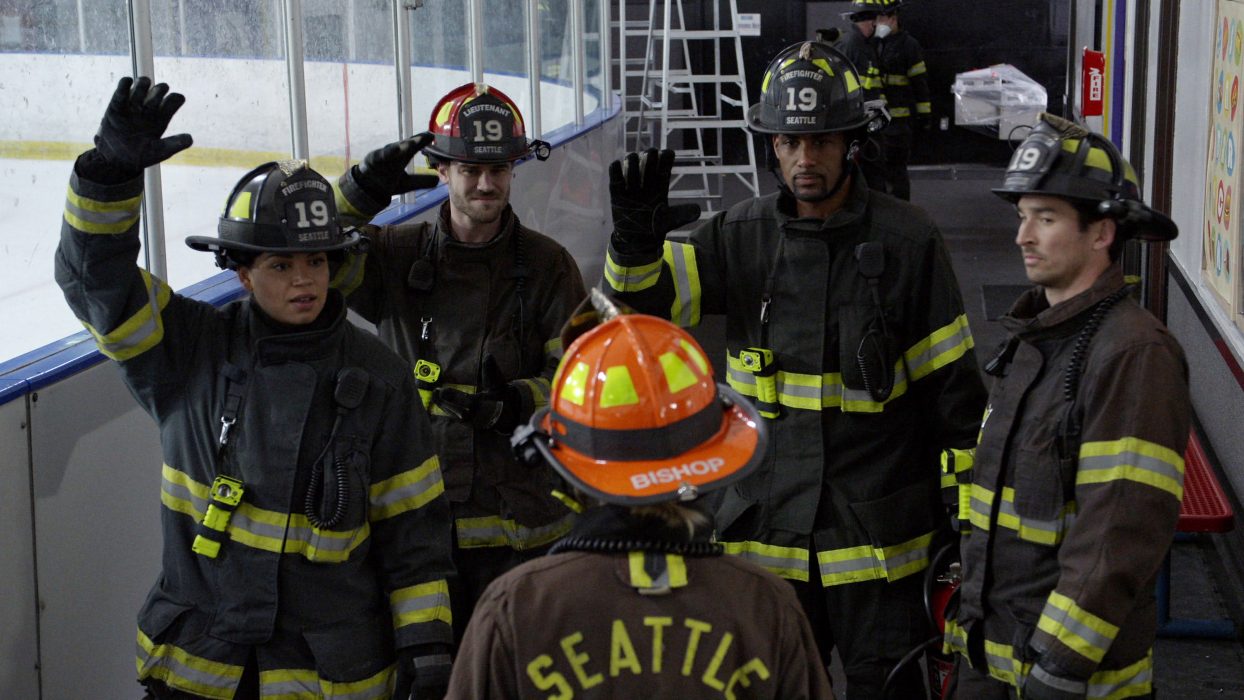 Sullivan gets the others and takes his suggestion to Maya. Jack, Sullivan, and Vic all know how to skate. So, he wants to go after the Zamboni on skates. Travis quickly reaffirms that he cannot skate. They’re quickly able to get the fire out, and I realize I would be way more interested in hockey if there were fire involved. Lloyd and Susie thank them for their help in saving their “baby,” the ice rink.

On their way back to the station, they stop at Kaminski’s to get some pierogi from Vic’s dad and run into Theo. Jack follows Vic inside, saying he wants to see how the pierogi are made. Vic’s dad tries to get her to come over for dinner sometime as she brushes him off. Back in the truck, Travis tries to talk to Vic about Theo, but she changes the subject. He reaches for the pierogi, but she slaps his hand away until it is heated up.

“Are You Firefighters Or Doctors?”

Carina shows up at the station for Maya and ends up talking with Warren. She says Bailey was completely supportive of her needing to go back to Italy. They commiserate over how hard it is to see their respective countries in crisis. Before they can talk any further, a couple shows up because the wife went into labor while they were on a walk.

While Carina and Warren help Nancy and Wayne back to the barn, Andy and Miller are on their way back from another call. Miller frets over the fact his mother hasn’t texted. He talks about how much he hates leaving Pru so often and worries he’s messing her up. Miller thinks Pru knows her mom left her, and he doesn’t want her to think he’s leaving her, too. Andy points out that she was just like Pru. Her mom left and her dad chose to stay. She reassures him that she turned out fine. 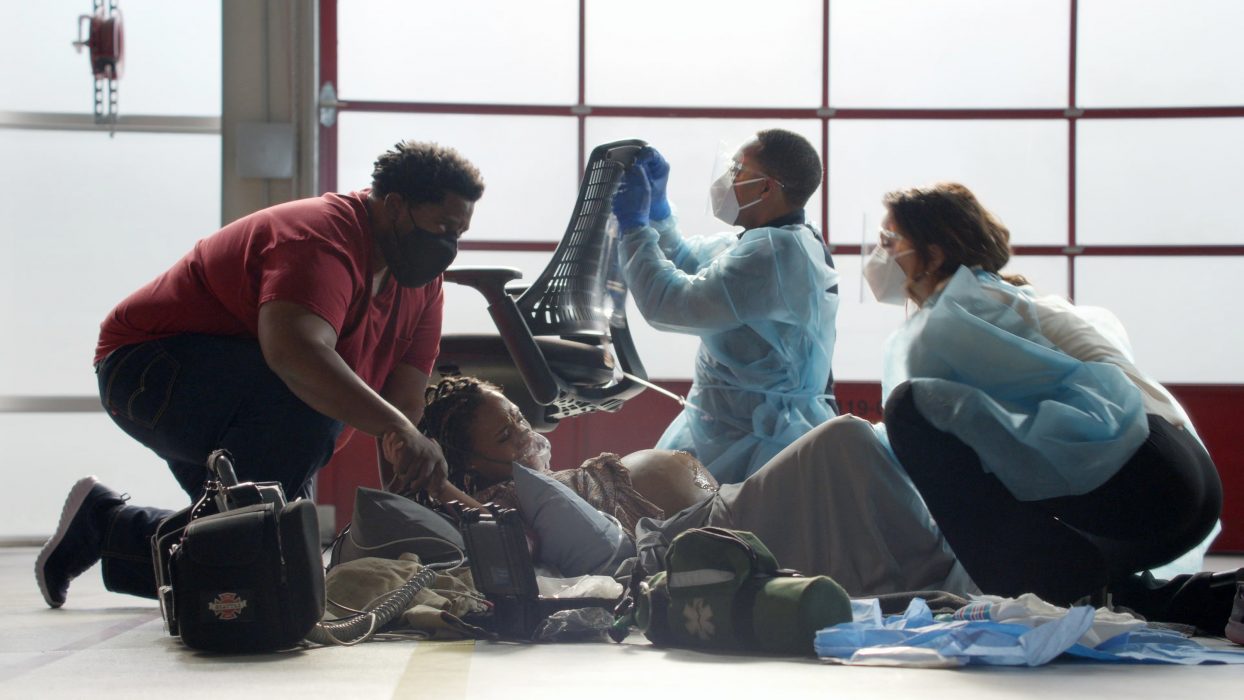 Carina has realized the baby is in a breech position. This is about where I start watching through my fingers. Childbirth scenes make me so uncomfortable. Wayne is confused by how much medical stuff these firefighters seem to know. Warren has to explain he’s a firefighter and a doctor and Carina is just a doctor. Carina is focused on trying to turn the baby. Nancy screams. I scream and dive under my blanket. Wayne gets woozy and collapses. We’re all having a heck of a time at this moment. However, Wayne is definitely the worst off.

Andy and Miller show up to get Wayne to the hospital. It takes a couple of tries to find a hospital that won’t divert Wayne due to being over capacity with Covid. In the ambulance, Wayne stays in V-Fib, but Miller refuses to give up. They show up at the ER only to be told there are no beds because of Covid. The doctor recommends Miller call time of death when she finds out Wayne has been down for six minutes, but Miller refuses. He yells at her to find a bed because Wayne’s child is not going to be fatherless. After 7 minutes and 32 seconds, Wayne’s heart regains rhythm and the hospital finds a bed for him. Remember that time because it will become relevant later.

“Our Country Is In Crisis”

The Zamboni crew comes back to find Carina and Warren with Nancy. Carina is as focused as if she were in the delivery room. The firefighters are confused why Wayne is on his way to the hospital instead of Nancy. It’s possibly the most hilarious exchange of the episode. I cannot do it justice in writing. The dialogue and the delivery are spot on from every single person. Carina finally kicks them out as Nancy gives birth to a baby girl. Andy gets back and delivers the happy news that Wayne is in recovery. Miller stayed to check on him.

While Carina cleans up, Maya tells her she fell in love with her all over. They talk about Bailey’s reaction to her resignation, and then Maya says she can’t go to Italy. She worries that will show the chief that women can’t be in leadership positions. Carina says she understands because Maya’s country is in crisis, too. She reassures her they’ll be okay. They better be because they are so great together.

Travis paces back and forth while he tries to figure out what to text Emmett. The goal is vaguely flirty. The reality is awkward as hell. Warren overhears and asks what’s going on between them. Travis evades the question. Later, Warren calls Bailey and reassures her they’ll “fight this.” And again, no good feelings here. 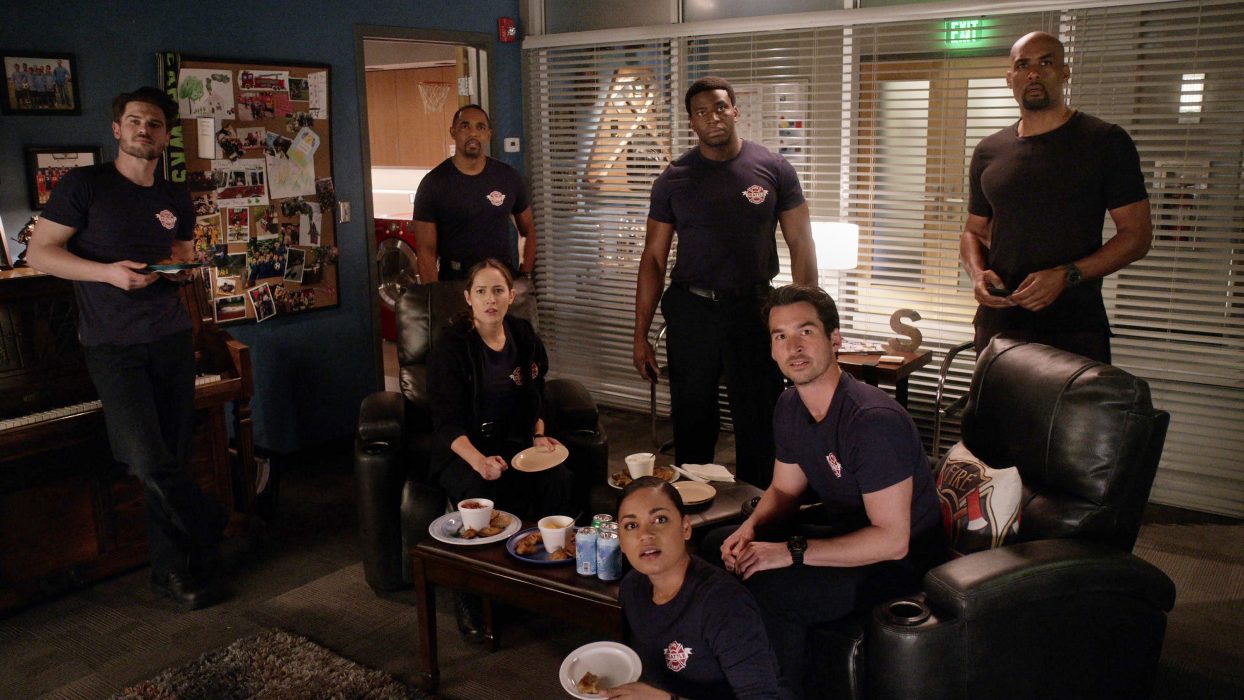 Vic and Jack warm up the pierogi while they talk about Vic’s father. Vic thinks the restaurant was her parent’s baby, but Jack thinks she’s wrong about that. The crew gathers in the lounge, preparing to eat pierogi and watch TV. They’re joking about the Zamboni fire. The entire atmosphere is just joyous. We know what’s about to happen, though, thanks to a call between Sullivan and Webber.

Once Miller turns on the TV, they watch the coverage of George Floyd’s death, even though his name is never explicitly said. All the air goes out of the room. Everyone is horrified and disgusted. Travis reaches out for Vic. Andy looks to Sullivan. As the news anchor says they held him down for 8 minutes and 46 seconds, Andy recalls how long they spent reviving Wayne. Miller just looks straight ahead and says, “They spent more time ending that man’s life than we spent saving one.” We fade to black for the week.

There’s no way the writers would know the country would be in the middle of the Derek Chauvin trial the same week this aired, but that made it even more poignant. Many shows have attempted to address police brutality this season, some with more finesse than others. Station 19 has felt the most authentic. It has never felt like a “very special episode” to tick off a box. It has always felt true to life. I cannot praise this show enough for this storyline. The show feels like it’s getting better every week.