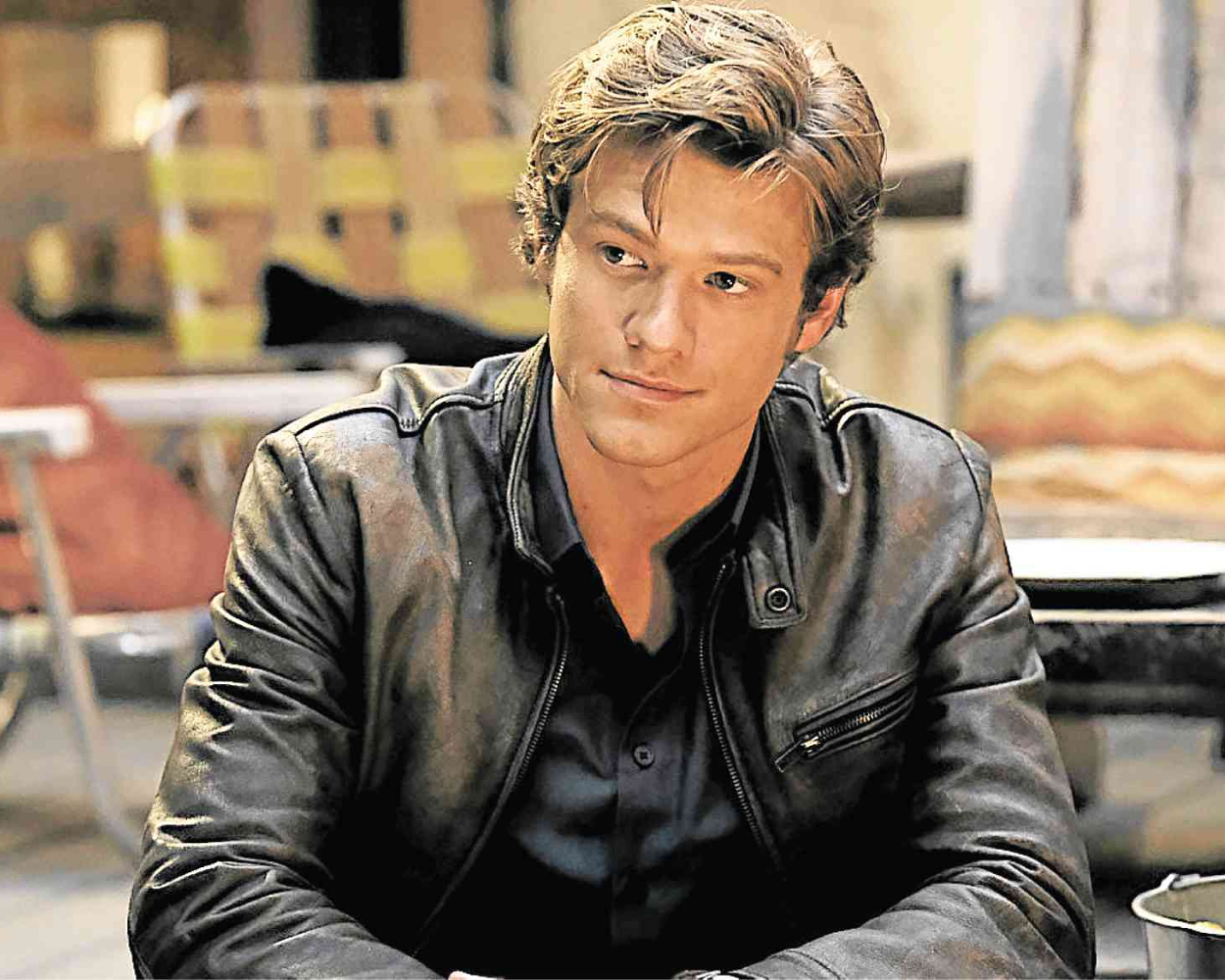 A Love Letter to ‘MacGyver’, the Cast, and the Fans

The battle to save MacGyver has just begun. Every minute of every hour of every day the fans are fighting. They are giving it their all. And as fans of the series ourselves, we support them completely. But more than that, we appreciate all of the time, energy, and work they are putting into every aspect of the campaign. Every signature on the petition, every cent donated to the gofundme, and artwork submitted is because of the fans. So while we continue to support all aspects of saving MacGyver, we also support the fans and wanted to honor some of those willing to share their stories with us.

It’s More Than a Show

When we watch scripted shows, there are so many things that go into deciding which one we watch. So many factors that come into play when deciding why we stick around. Season after season, moment after moment, they pull us in. The characters, the actors playing them, the writing. Everything that makes the show is part of why we feel the way we do about it. We may watch it to escape reality, bond with friends and family, or any number of reasons.

Samantha or @Sammykinz on Twitter beautifully shared the moment of falling in love with MacGyver. 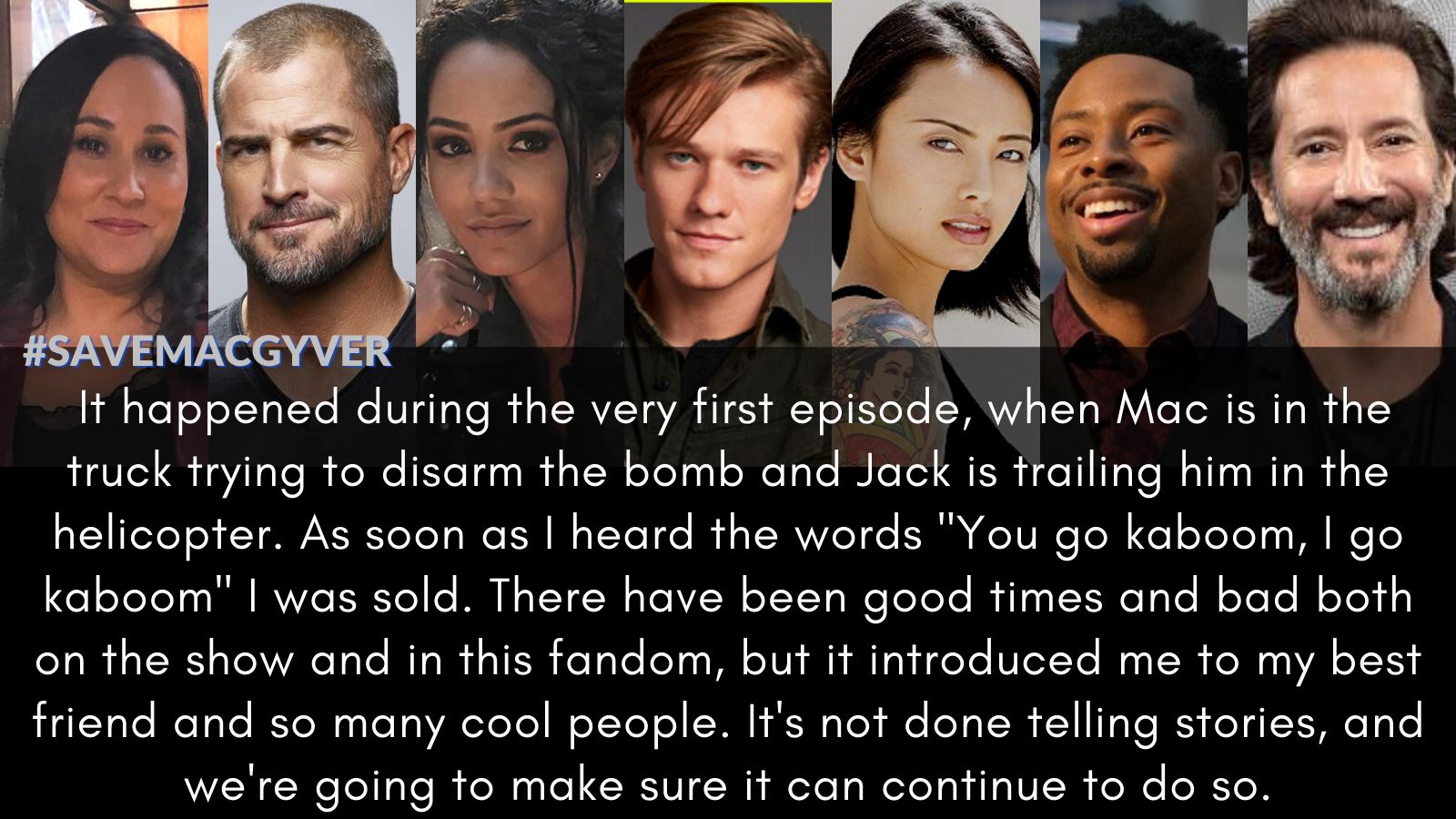 Jo’s story definitely gave us a case of the feels. 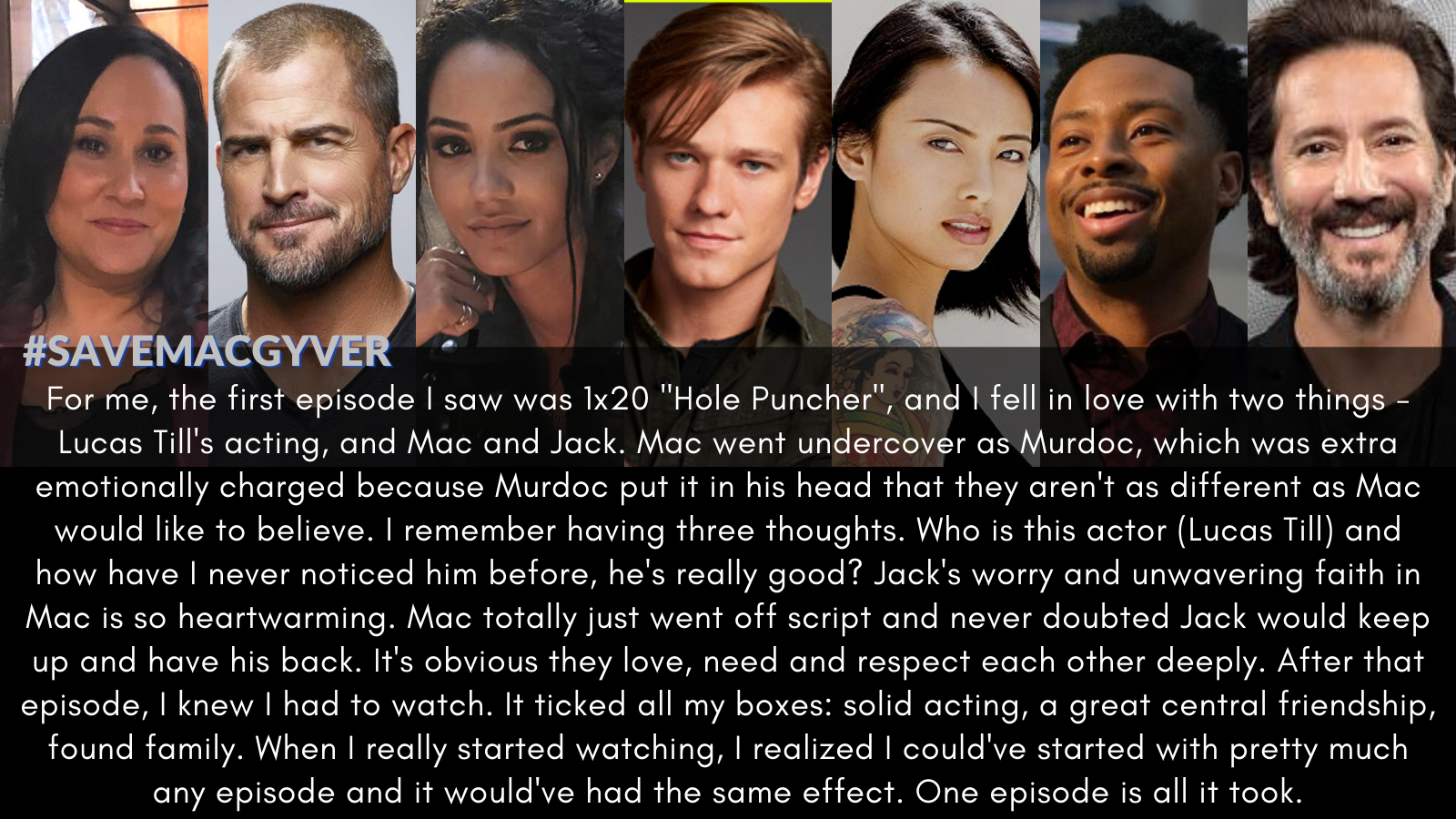 Liz is in this fight for the long haul! And these words give us a renewed burst of motivation to save MacGyver! 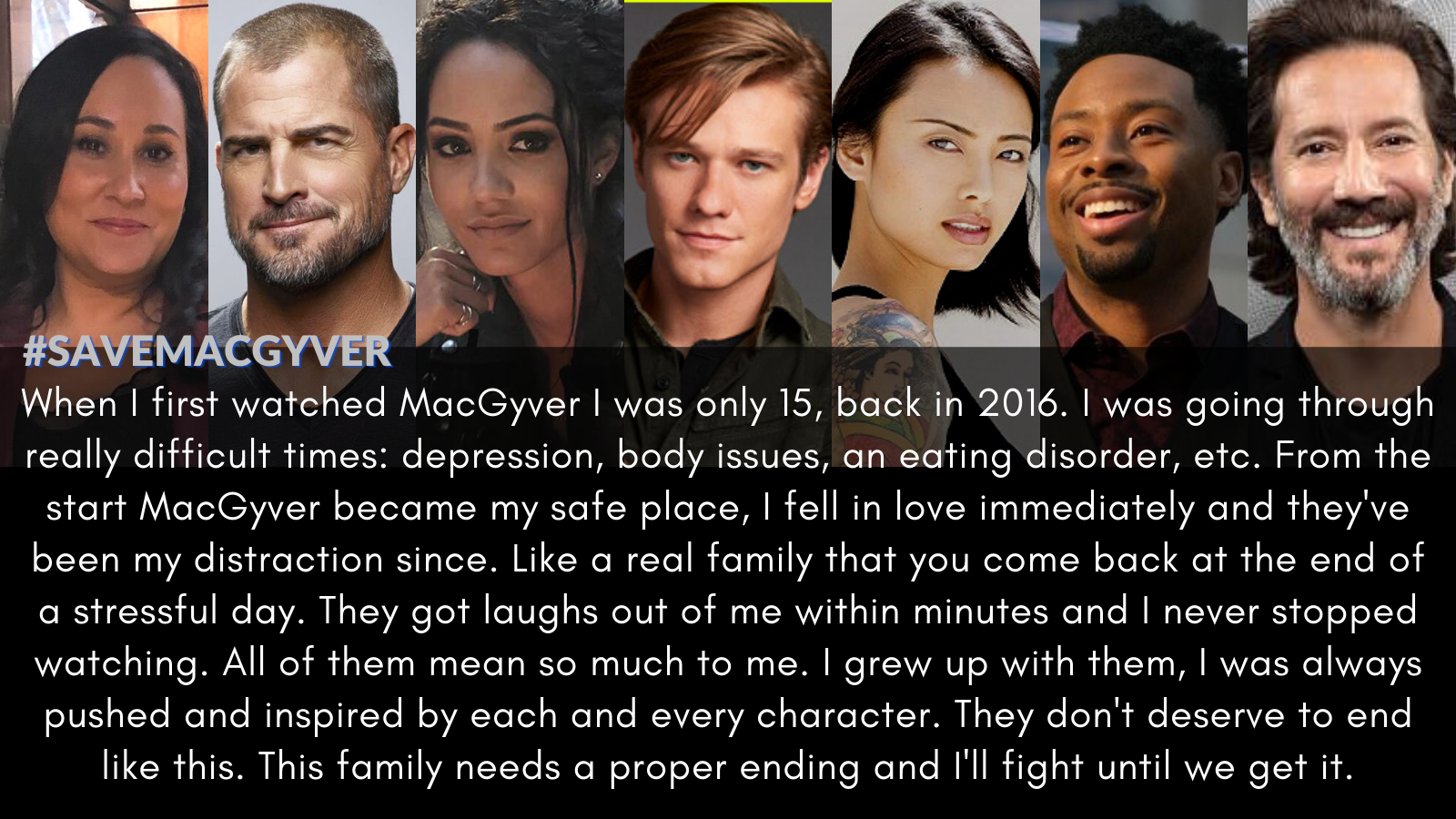 The way Sharmin speaks about a sense of family really hits us right in the feels. MacGyver has given us all such an amazing sense of family. But these words had our hearts feeling full and our feels on overload. 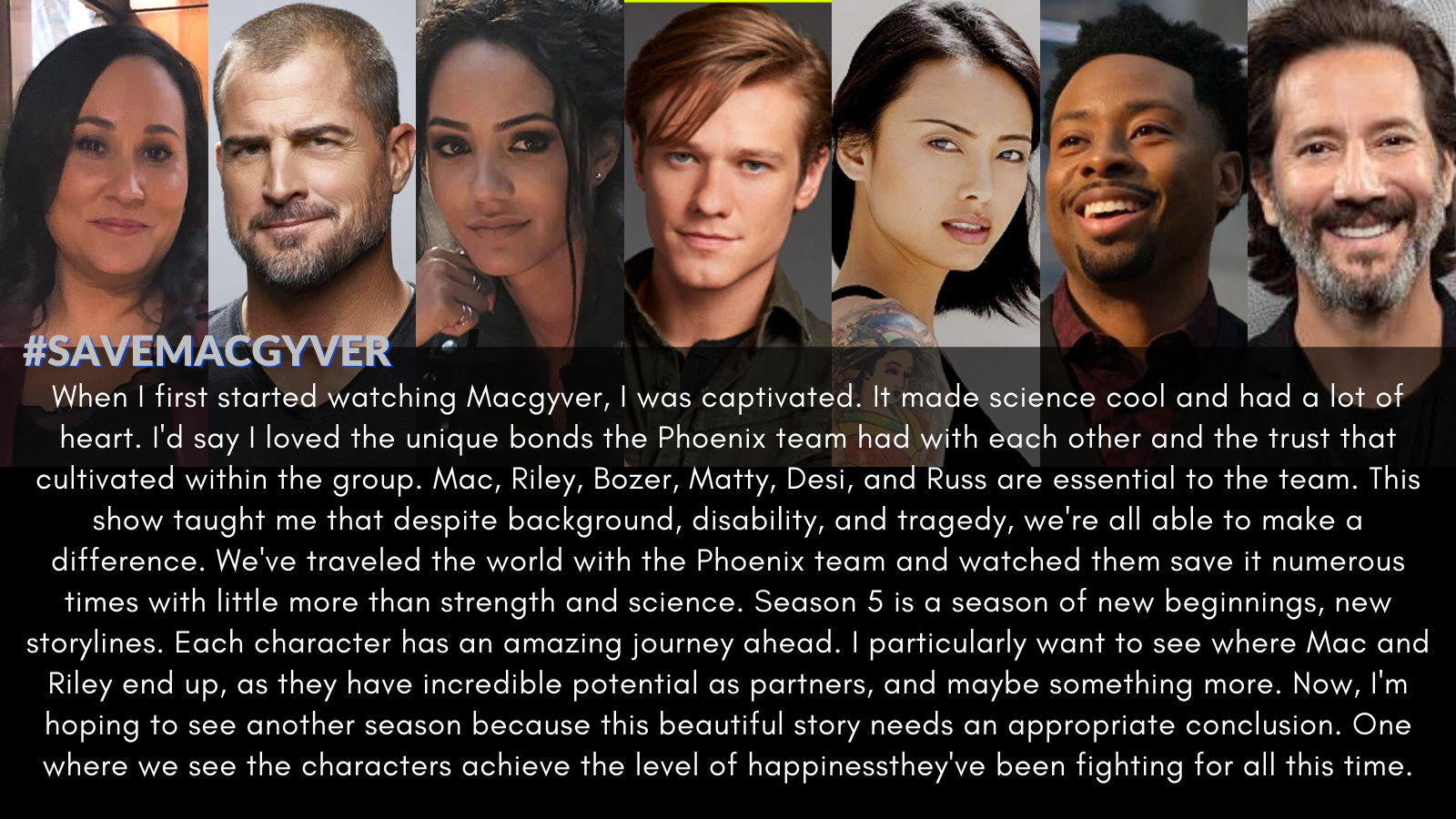 April’s story leaves our hearts feeling full and is just another perfect example of why we are fighting so hard to save this show. We appreciate you, April, and are so glad you’re here! 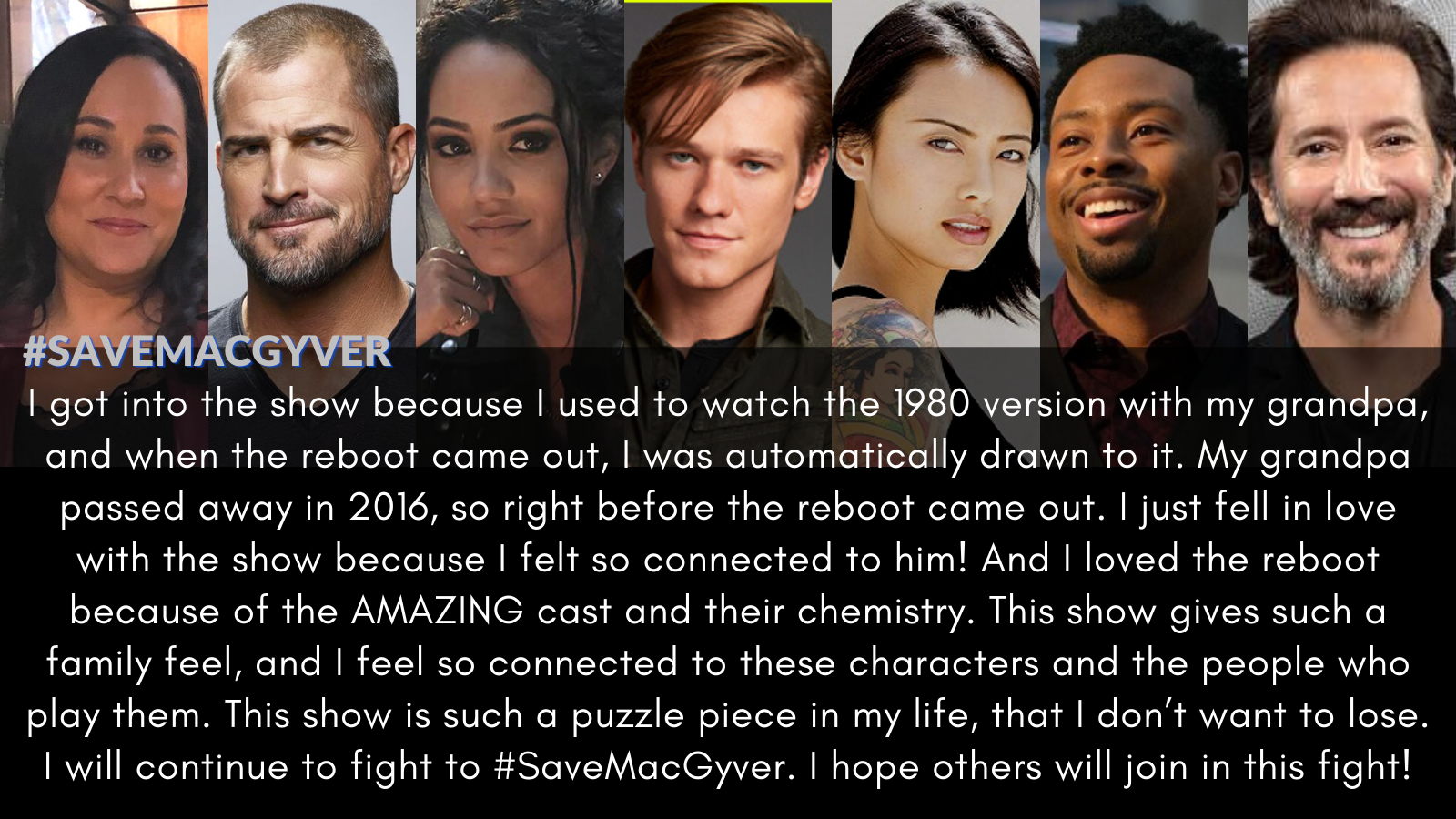 Rainey put us right in a glass case of emotion with this story! We are so happy you’re here Rainey and thank you for sharing this incredible story with us! 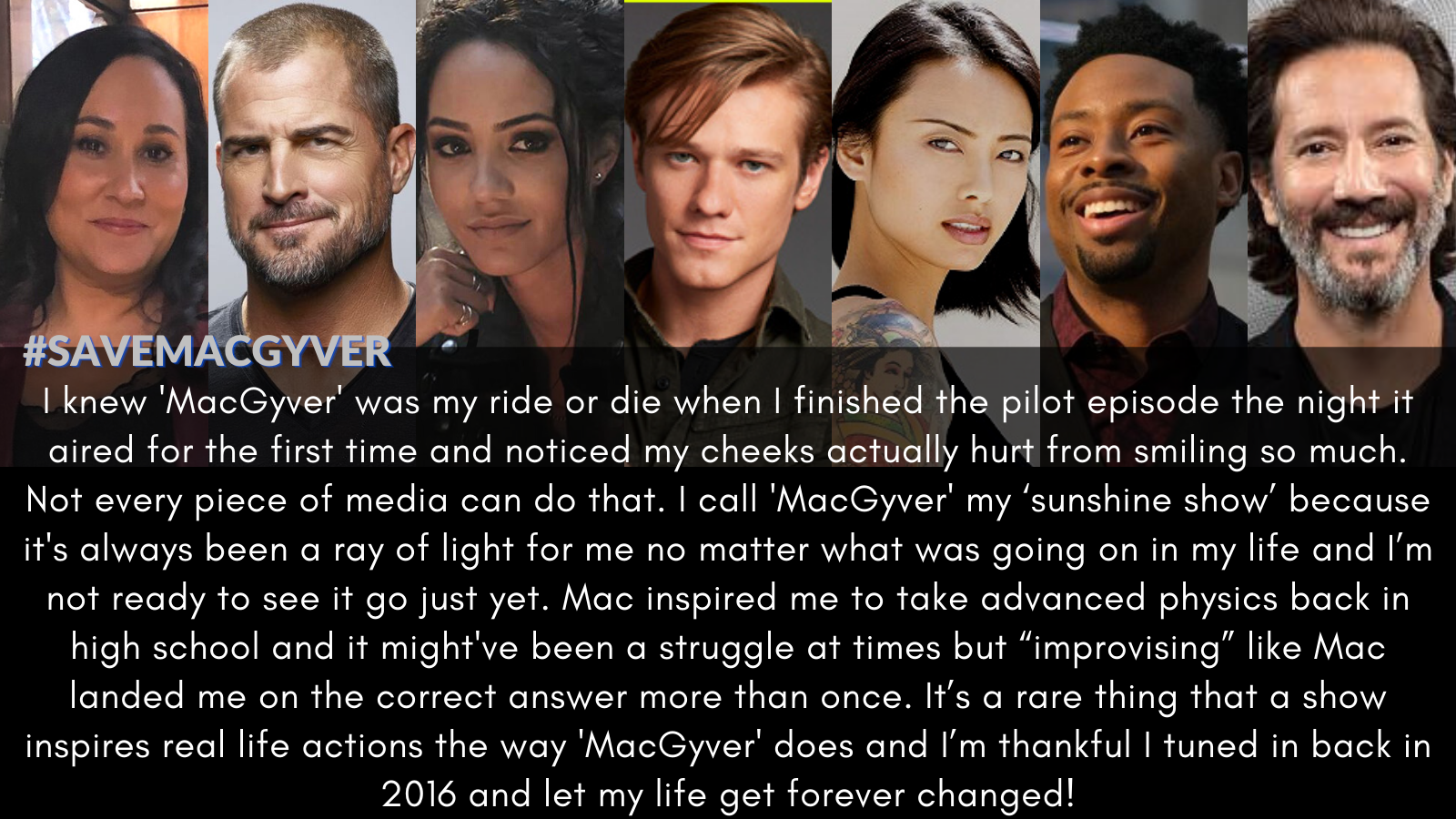 As a group of proud nerds ourselves, we absolutely agree with Joana on how important of a character Riley is to us! 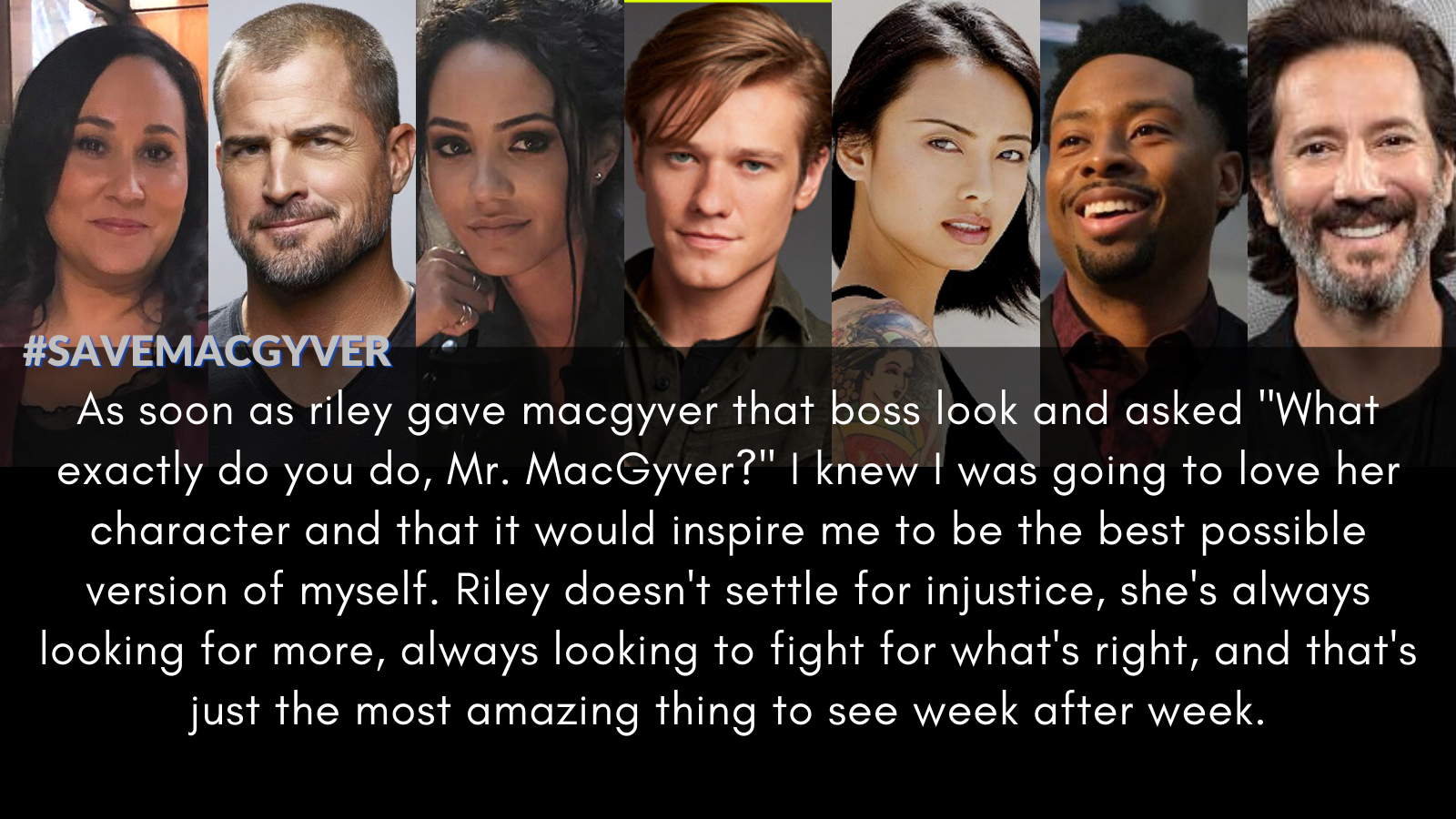 Our Letter to All of You

To anyone who’s been fighting to save MacGyver, words cannot express how proud we are of each and every one of you. Whether or not this show is renewed, we don’t want any of you to ever forget what amazing things you have done. The way you have all pulled together and supported one another to accomplish amazing things is so inspiring. We’ve gotten to know so many of you here at Cape & Castle and it’s been a true pleasure. And we aren’t going anywhere. We’re going to fight with you until the end of the line and then some. As long as you’re fighting, we’re going to stand right there beside you and fight too.

I’m Sarah C, one of the co-founders at Cape & Castle. I resisted watching MacGyver at first because I’m a brat and have learned not to trust reboots. But I had some friends on Twitter that continued to taunt me with Mac and Riley. So I gave in and tried it out. I binged four seasons. And did so pretty close to the premiere of season five. So there were definitely some sleepless nights in there because I really wanted to get caught up before the new season started. And every single fan I came across on Twitter welcomed me with open arms. You encouraged my watching and never spoiled me, but always got me excited for what was to come.

I want to thank each and every one of you that welcomed me the way you did. There are so many fandoms out there that are daunting to join. Or that you join and then immediately run screaming because the fans within them are so rude or violent to one another. But not this fandom. Not from what I have been lucky enough to experience. I’m sure there are mean ones out there, but they have never crossed my path. I cannot express how much I appreciate that you have all opened up to me and told me your stories of why this show means so much to you. If I had the power to do it myself, I would renew MacGyver this second. The closest I can come to doing that is writing these articles, supporting you, encouraging you, and motivating you.

And I’m going to do that any way I know how. Because yes the cast and crew of the show deserve it. But so do all of you. Especially after how hard you’ve worked. So thank you. Truly and from the bottom of my heart, thank you. This experience wouldn’t have meant nearly as much without all of you. And when we win, because I refuse to accept anything else, I can’t freaking wait to have the wildest Twitter celebration ever! You can find and follow me on Twitter @Sarah_Jeanne17, you can find and follow the site @capeandcastle and you can check out our site here for more content on a very wide variety of shows, movies, books, music, and more!