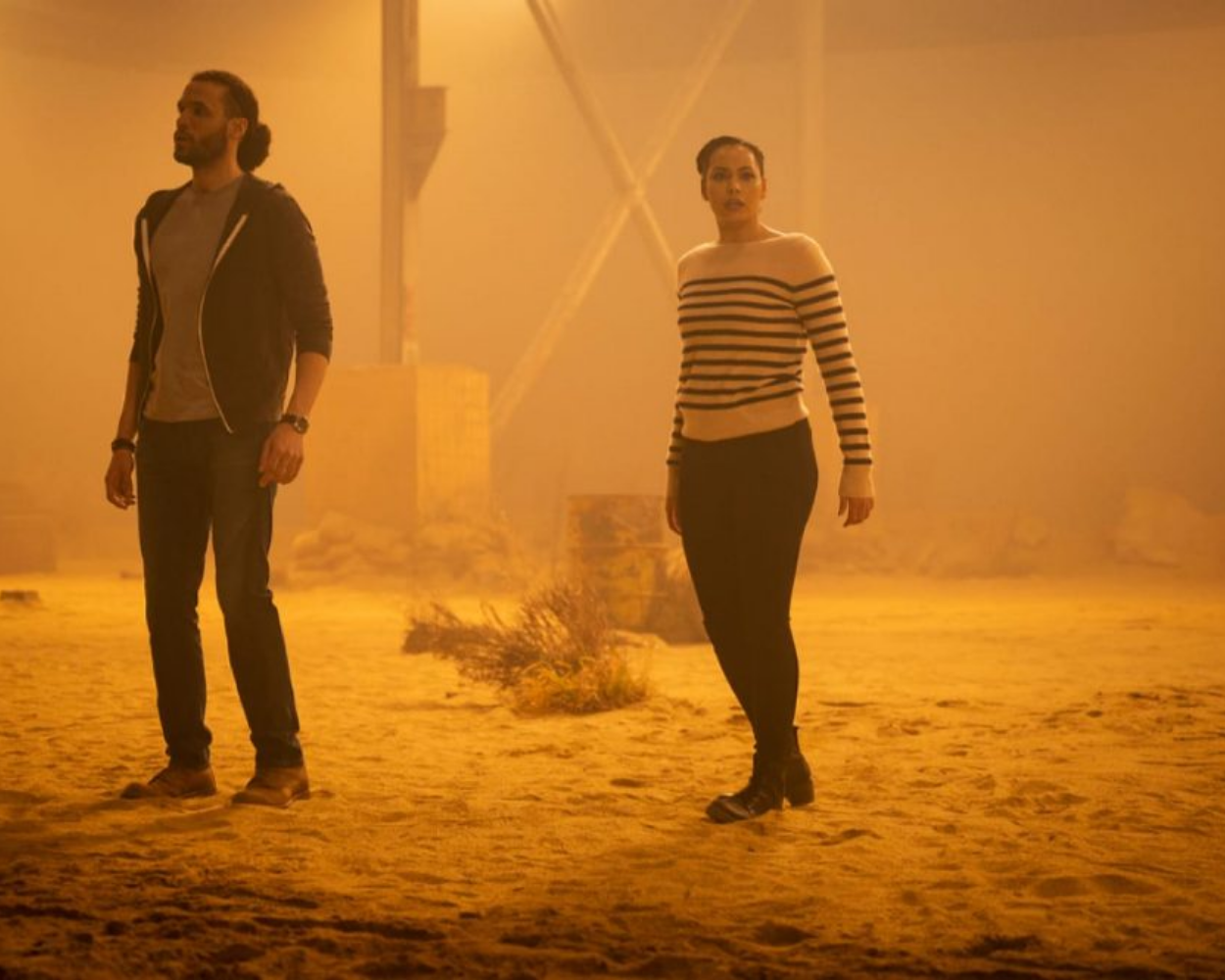 This week’s episode of Charmed is an exciting one. It’s the 50th episode of the series and it marks Rupert Evans’ second time in the director’s chair. His first directorial outing was my favorite episode of season two and this was another excellent episode. Keep reading for my Charmed 3×09 review!

We start in the attic with Macy and Harry working on the tablet translation. He wants to talk about how she’s feeling, but she wants to move on from the Shea Group encounter. Harry realizes they need a demonic translator for help. Macy is as enthused as I am when she says she would rather stick a hot poker in both eyes than go with him to Abby.

Jordan arrives and accidentally triggers Macy’s allergy. She snaps at him to be more careful and brushes him off as he asks if she is okay. Before they can say much more, they hear a noise in the kitchen. A hooded figure casts a spell and Jordan jumps in front of Macy to save her. From here, we’re going to split into each individual storyline.

“Why Does Everything Lead Us Back To Abigael Caine?”

I made my feelings on the whole Abigael redemption arc pretty clear in the last recap. So, we’re going to dispense with this storyline quickly.

Abby is trying to be a better person, so she takes Harry to an exiled demon named Fenric the Vile to have his passage translated. Fenric is an absolute delight. He is chewing all the scenery around him. He reminds me of Anthony Hopkins in the ‘Thor’ movies. I would like to keep Fenric.

Fenric does a mindmeld on the two to figure out their true intentions. Abby is irate he would do a mindmeld without her permission, like she wasn’t trying to do the exact same thing to Jordan last week. While Fenric translates, Abby hyperfixates on trying to figure out how he controls his demon side. She comes across a glowing amulet, which replaces her and Harry’s emotions with pure logic.

While they’re sitting there under the influence of the amulet, Harry talks about how he felt desperation when he couldn’t figure out how to help Macy. Abby suggests he is so eager to find a solution to the allergy because it would be solving something. As much as I love moments where Harry explores his emotions, I certainly don’t want him doing it with Abby.

Fenric offers the translation if Harry kills Abby. I normally hate when actors just use a blank monotone as a shortcut for emotionless, but Rupert Evans and Poppy Drayton both handle this scene really well. I may not enjoy the content of this storyline, but all three of the actors here are doing great with what they’ve been given. Harry decides Fenric would unite the demons into doing something worse, so he lets Abby live, even though she pointed out it would have been in his best interest to kill her. They grab the translation and leave Fenric as he lets out a great wail of defeat.

Back at Abby’s apartment, she hits on Harry as he tells her redemption can be earned if she puts in the work. It is the exact same conversation Jordan had with her in the last episode. The only thing this entire storyline really got us was the demonic translation for the tablet.

Maggie and Mel find the hooded figure from earlier tossing around books in the attic. Maggie slides across the floor and kneecaps the figure with her baton. It turns out their cousin, Josefina Reyes, has come to visit/meet them. From the costuming to the choreography of the fight in the attic, this was such a good callback to the introduction of Harry’s Darklighter in the season two premiere. 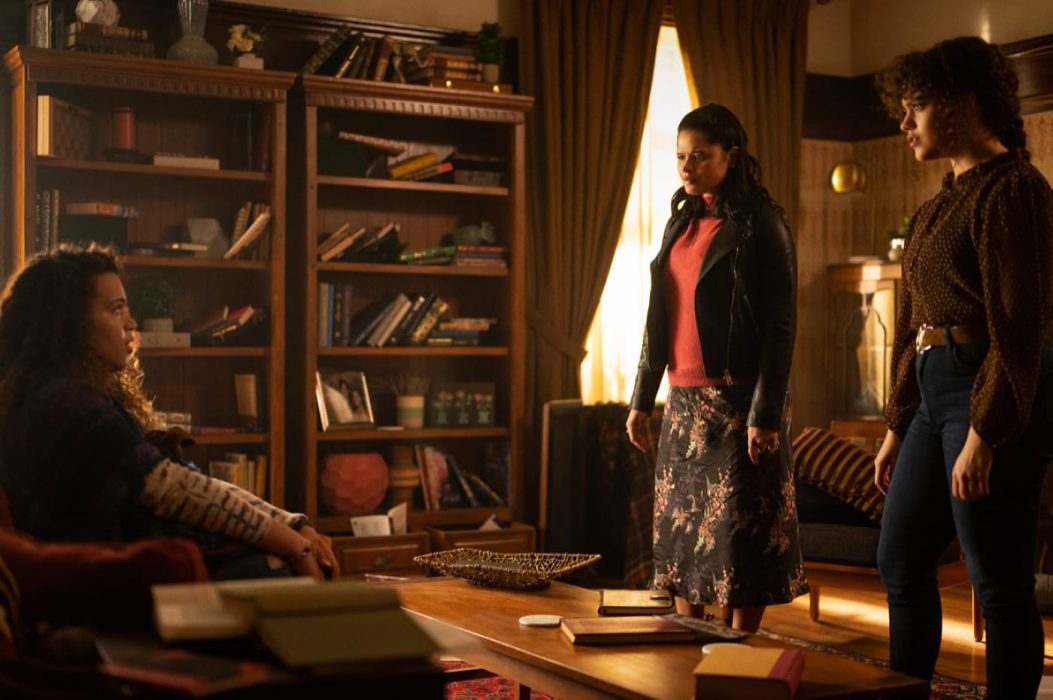 Maggie and Mel ask why they’ve never heard of Josefina. She says they might know her by her deadname, since she was assigned male at birth. Mareya Salazar is the second transgender actor and character introduced this season. I love the efforts towards authentic representation. Josefina is there to take back the Book of Shadows that Marisol stole. She tells them to produce the Book somehow, or Macy and Jordan will stay trapped in her bag, which is about to burst into flames due to Jordan’s curse.

Mel lectures Josefina about using magic she doesn’t understand. Considering how Mel constantly used magic she didn’t understand in season one, she has come a long way. I really want Josefina to stick around, so Mel can mentor her. Mel and Maggie find out Josefina’s family kicked her out when she started trying to get her powers. They were fine with her transition, but not with the idea she could be a witch. She wants to use the Book of Shadows to prove them wrong.

Josefina says she would typically make a poultice to get them out of the bag. Mel and Maggie are unsure about the “black magic.” Josefina points out brujeria wasn’t considered evil until colonization. I love the possibility of seeing more of the magical world through Josefina. Marisol was Puerto Rican. It makes perfect sense to delve into brujeria, and it’s so different from any other magic show on television.

They go to the Command Center so they can find a spell. Maggie remembers a spell called “Walls of Steel” they couldn’t translate. Maggie shows it to Josefina, and they’re able to combine brujeria with Western magic to finish it. Josefina initially doubts herself, but Maggie encourages her, and they cast the spell to stabilize the bag.

Mel and Maggie convince Josefina to stay, so they can help her figure out how to manifest her powers. I loved this storyline, but I was furious we didn’t get a scene with Macy and Josefina. Macy is constantly othered in the family storylines. We have the acknowledgement that Macy is Mel and Maggie’s sister, but they only acknowledge her as Marisol’s daughter when they’re pointing out how she was given up. We could easily have sacrificed that last Abby scene for Macy meeting Josefina.

“I’m Cursed With A Burden I Don’t Deserve”

Since Jordan was hit with Josefina’s spell, he and Macy are trapped in whatever his subconscious needs to work out, which looks like his high school.  I am ridiculously excited to spend time delving into Jordan’s background. The show has done such a good job of blending him in organically, and Jordan Donica is such an endearing actor.

Macy comments on how little she knows about Jordan. He says she keeps biting his head off, but she says it’s been a rough couple of days. He heard about the Shea Group, but she brushes him off when he mentions it. They see some glimmering lockers and run towards it. There are two keyholes and they need to find the keys. Macy figures out the spell is destabilizing because it’s getting so hot.

The first key is with Jordan’s high school girlfriend Trisha. She is blatantly awful and manipulative. Jordan manages to flirt with her and gets the key. Trisha says some guy in weird clothes with a hat has the second key. They walk away and Macy asks how long he went out with her. She asks if he knew he deserved better, but Jordan brushes her off. Macy asks if he ever gets mad about anything. He says he gets mad when people punch him in the nose during boxing lessons, a callback to their first meeting. 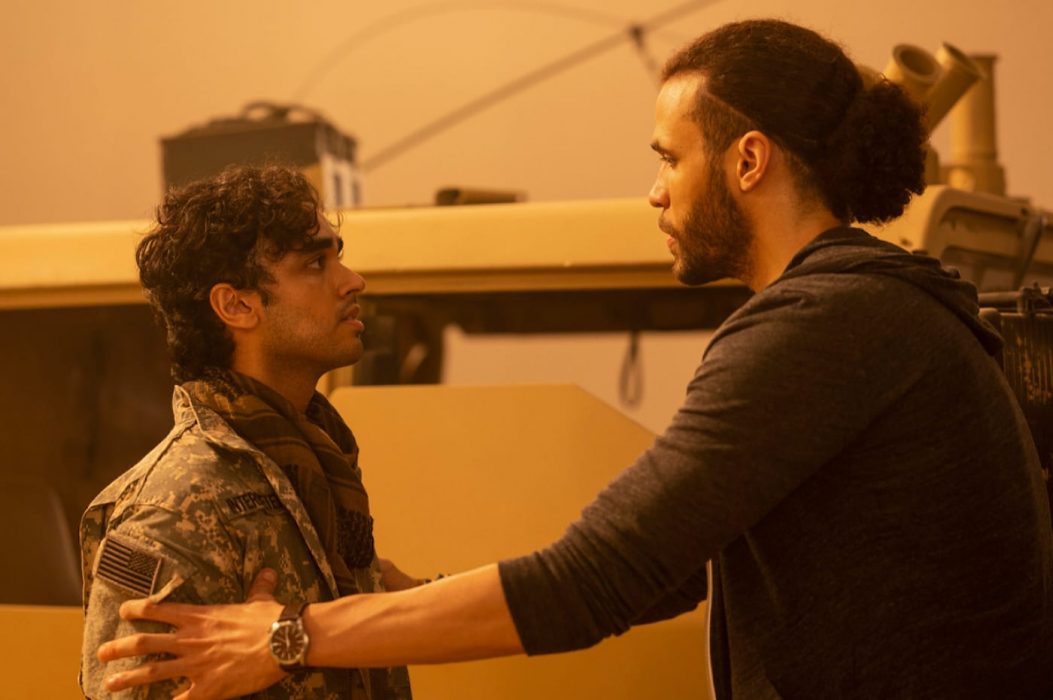 They approach another set of doors. Helicopters sound in the background and Jordan goes completely flat, realizing what’s up next. They step through into Afghanistan. He spots his translator Mateen and runs over to him. Jordan helped Mateen get his green card, but Mateen died on their final mission. Jordan tries to keep him from going on the mission, but he gets shot anyway and dies in Jordan’s arms. This entire scene was completely heartbreaking. Jordan Donica was such a standout in this episode.

Macy goes over to him, as they spot the guy with the second key walking back through the doors. She realizes the other guy is the Witchfinder General, also known as Jordan’s multi-great-grandfather. They go back into the school, and Jordan just wants to stop. They move on to the empty auditorium and get into an argument about how Jordan doesn’t want to confront anything. She yells that he never gets angry. He yells back that he’s cursed with a burden he doesn’t deserve. As they keep talking, they move from talking about Jordan’s curse to the racism both of them experience in the world. Macy wants Jordan to believe he has the right to get angry. Jordan points out they are both carrying too big of a burden. It is honestly such a powerful conversation.

The lights on stage come up to reveal Florence and the Witchfinder. If he kills the Witchfinder, Florence says the scales will be balanced. Jordan fights him long enough to get the key, but he tells Florence he can’t change the past. He can balance the scales with how he changes the future. Florence whispers something in his ear and his entire face relaxes.

Once they’re back home, Macy and Jordan do tequila shots in the backyard while they commiserate over all the things they’ve been told as Black people. “Be exceptional. You’re one of the good ones.” So on and so forth. The power this scene has as two Black characters are just getting a chance to talk to each other without any white people around. It shouldn’t be so remarkable, but it’s still so rare on most network television shows. Macy comments on how nice it is to have a friend who gets it. Jordan asks if they’re friends now, and Macy just adorably says she thinks so. I love Jordan, so I want him to be best friends with everyone. He tells Macy Florence released him from his curse. And sure enough, he’s able to hug her without triggering the allergy.

Macy finds Harry in the attic, and he tells her he finally understands that he’ll never be able to fully understand how she experiences the world. He apologizes for trying to make her talk about the Shea Group. She admits that having to explain it is exhausting, but the fact that he understands that much means the world to her. They have a sweet moment as they place their hands as close together as possible in a callback to their Paris dinner from 3×04. These are the sweet Hacy moments I live for.

Harry and Macy say both halves of the translation. The tablet glows and the house creaks. Everyone runs outside to see scorpions raining down everywhere. Harry says they’ve unleashed chaos and that’s where we end the episode this week.

Are you excited to see more of Josefina in upcoming episodes? Are you ready for the allergy to be over so the sisters can all hug each other again? Find us on Twitter @capeandcastle to share all your Charmed 3×09 thoughts! Be sure to check out our site for more content!