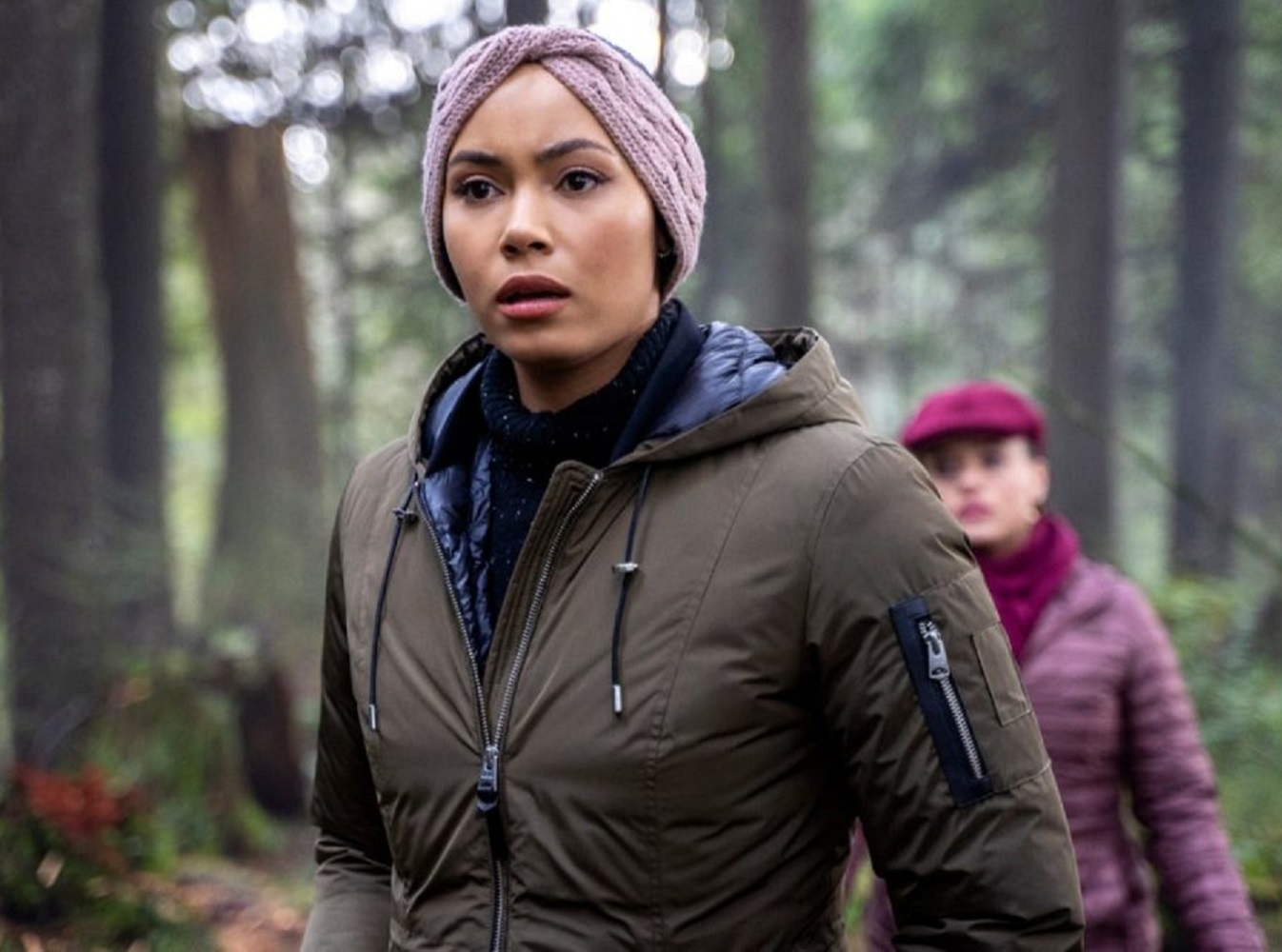 This week’s Charmed was a bit of a mixed bag and I have a lot of feelings, so join me as I try to unpack all of my frustrations. Keep reading for my Charmed 3×08 review!

“You Yelled Demon In A Crowded Theater”

Mel and Harry’s search for the rest of the stone tablet leads them to a forest in Okanagan, British Columbia. While they’re traipsing along, Harry worries he hasn’t heard from Macy yet. More on her later. I just really enjoyed seeing Harry as a worried boyfriend. It was one of the few things that made me smile this week. 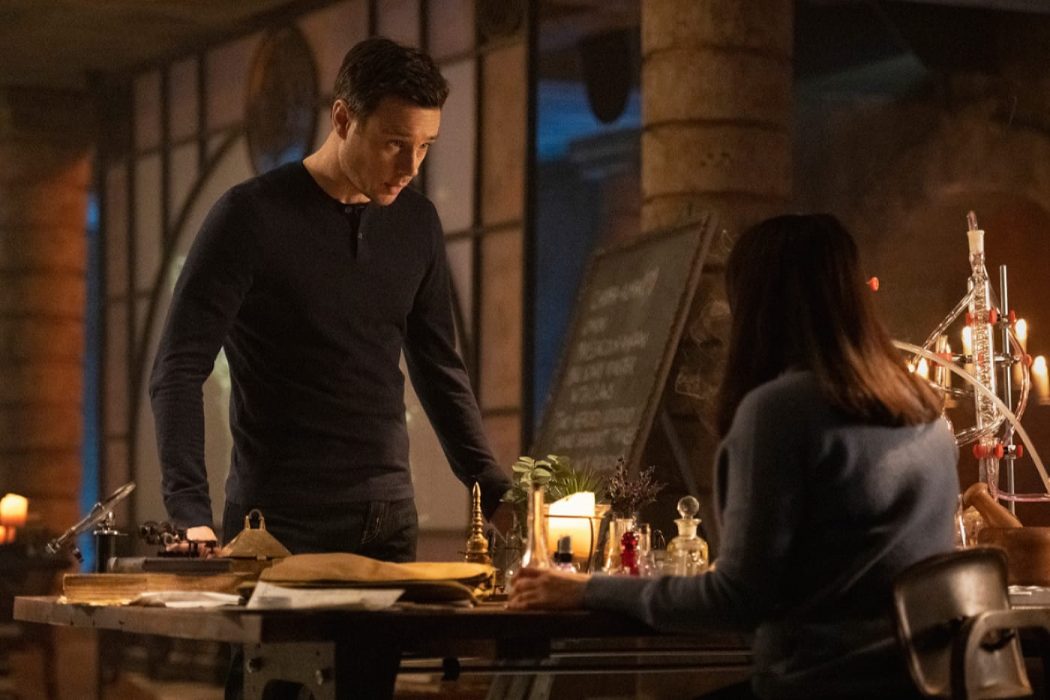 They find an injured witch named Kyra who claims a demon harmed her. Naturally, they take her back to the Command Center because everyone gets to go back there now. While Harry tries to heal her, she explains a demon named Willow stole some family runes from her. Then she starts to seize and passes out.

Maggie and Macy join them. When Macy finds out a demon harmed Kyra, she becomes irate and wants to vanquish Abby for violating their truce. I am certainly in favor of that. Instead, Macy and Maggie go back to the forest while Mel and Harry continue to search for a cure. Harry puts Kyra into a magically induced coma, while Mel goes to confront Abby. We’ll get to that mess.

Maggie and Macy find out Willow is a witch, who was trying to protect her family’s sacred objects. Kyra was the one trying to steal them. They take this information back to Harry, who is irritated that he and Mel were duped.

Kyra tries to explain herself once she’s awake. She wanted to scatter her mother’s ashes on their ancestral burial ground, but she needed the sacred runes. The Charmed Ones and Harry all point out she manipulated them and made false allegations against Willow.

Harry and Mel mediate a resolution between the witches. Kyra gets to use the runes and scatter her mother’s ashes. In return, the families will come to a truce. Willow hands over the runes and Harry instantly recognizes the symbols. Willow takes them to the Cave of Ancients, where they find the second half of the tablet.

Jordan helps Maggie out with a project for her psychology class until work calls him away. We were getting some adorable Joggie content until he got pulled away, so I’m even more irritated when I see why he had to leave.

A client requested Jordan’s assistance with getting legal papers signed. Unfortunately, the client is Abby, who hired Jordan’s firm for her corporate accounts. Jordan has been ignoring her calls, but Abby won’t let him leave until she gets answers about her demon totem.

Abby is at her absolute cringiest this entire episode. She puts herself into a position of power over Jordan by hiring his firm. So, he can’t say no to her requests without risking his internship. She sexually harasses him from the second he walks into the door.

Jordan continues to evade her as she stalks around after him. He actually looks terrified of her. Then she turns into her full demon form. Now, I’ve found Abby irredeemable since midway through season 2, but this was the moment where I asked out loud why anyone would find her redeemable. Abby continues to hurl fireballs at Jordan until Mel portals in and uses her ice powers to stop her. 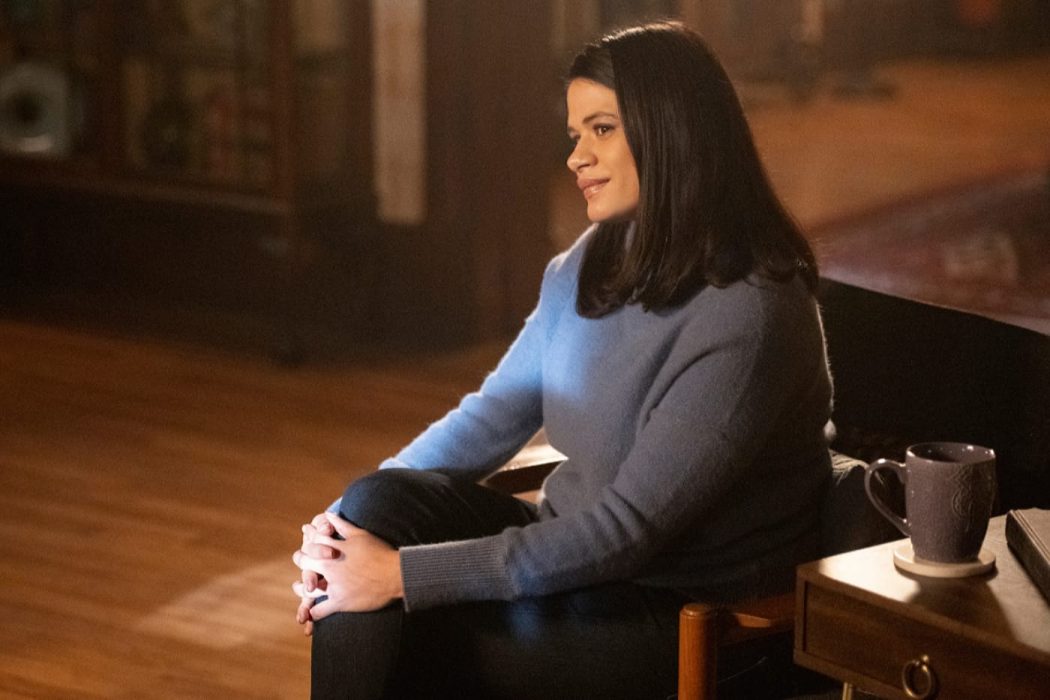 Mel yells at Abby for violating their truce. Mel did have faulty information, but the way Abby tormented Jordan makes her pretty vanquishable. Jordan tries to mediate from behind the counter until Harry portals in to get Mel. Abby has the audacity to say she’s owed an apology. Mel points out she was about to kill Jordan. Mel tells Abby, “You think threats and coercion count as friendship. You’re irredeemable, Abby.” Then Mel leaves. Harry asks Jordan if he’s coming. In my ideal version of this scene, Jordan leaves with them and we never see Abby again. Instead, Jordan stays.

Jordan points out all the ways she’s wronged him in the past hour or so. She claims she would never hurt him, but I definitely don’t believe that. After a little more manipulation from Abby, Jordan lets her do a mind-meld, and I scream. Once she does it, she realizes she is trying to kill herself voluntarily.

Abby asks if he thinks she’s irredeemable. He tells her redemption has to be earned. He has been battling his own demons since returning from Afghanistan. Jordan says he had to repent. If they want to give anyone a redemption arc, can it please be Jordan? He has at least a shred of decency in him, and I’m way more interested in his past.

Let me just unpack all the reasons I hate this entire storyline. We’ve got Abby, who never helps anyone unless it benefits her. She literally made Macy kneel before her as she stripped her of her powers. And while it is true that Macy asked her to take away the demon powers, she did not ask Abby to humiliate her and keep the powers for herself. She repeatedly sexually harasses Harry and Jordan. Because she’s an attractive woman, I guess we’re supposed to see her as “bold” or “confident.” If Abby was a man, there would be no question about it being sexual harassment.

There’s a lot of talk about if Abby can be redeemed. For me, the question is should Abby be redeemed. I don’t understand why we are spending this much energy on a character who has only a tangential connection to the Charmed Ones. Why, in this show that is supposed to be about three empowered women of color, are we spending half an episode watching a white woman torment a Black man because she’s sad? Abby’s entire storyline feels even more egregious when it is opposite Macy’s this week.

“From Zero To Full Karen”

The episode begins with Macy going to the Shea Group to help with their global Give Back campaign. She looks so happy and excited to be able to work on something productive. She talks about all the ideas she has. We flash forward to security escorting her out of the building as she cries.

Macy goes back to SafeSpace and is clearly upset. When Maggie finds her, she doesn’t want to talk about her meeting or help Maggie with her project. Later, once they’re in the forest, Macy agrees to help her sister. The project is a word association test. As she keeps going, she associates “work” with “mad” and “mad” with “blindsided.” 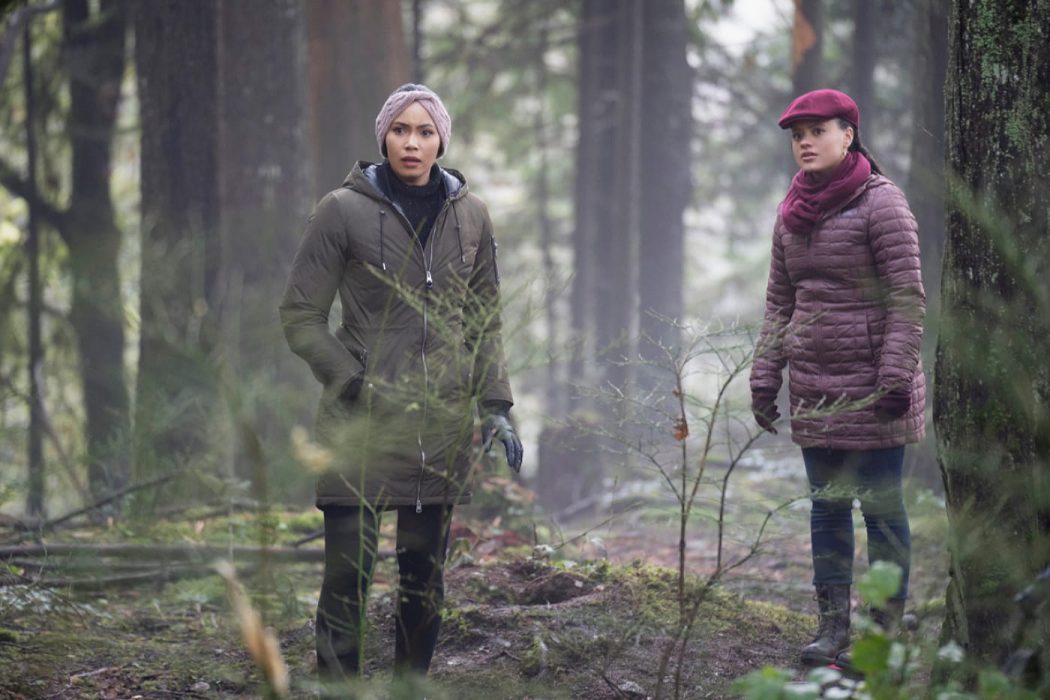 In our next flashback, Macy’s “meeting” is a photoshoot. A white woman, Lori Brewster, comes over to introduce herself to Macy and explain Macy is the face of their malaria campaign. Macy tries to explain she would have liked some advance notice for a photoshoot. Lori dismisses her and says she looks great. She praises her appearance before reaching out and grabbing Macy’s hair. Lori’s assistant, a Black woman named Eriel, steps in and says she’ll take Macy to the dressing room. Once Lori walks away, Eriel asks if that really just happened.

Back in the dressing room, Macy changes into the outfit Lori wants, a low-cut, short leopard print dress more appropriate for a music video. Macy is obviously uncomfortable. Eriel finds another outfit on the rack, which is much classier. Lori is irritated Macy changed the outfit. She tries to cover and says Macy could make a “paper bag” look good, even though she wanted her in something with more “oomph.” Before she leaves, Lori passive-aggressively says if Macy wants to change anything else, she needs to run it past her first.

Following the confrontation with Kyra, Macy storms out of the Command Center into SafeSpace and finds Eriel. She brings back Macy’s clothes and purse. She also apologizes for what happened. Eriel hugs her, and I’m so grateful someone can hug Macy because she needed it so badly. Maggie walks up behind her and Macy tearfully admits she isn’t okay.

We get the final flashback of what happened at the photoshoot. Lori pulls up the “hero shot,” which is basically the first photo you’d get if you googled “starving African children.” Macy points out that malaria isn’t specific to Africa. Lori dismisses her and says the board approved the photo. Macy asks how many people of color are on the board. She realizes they just needed someone pretty and “Black enough” to be the face of their campaign. Lori immediately accuses Macy of threatening her and calls security to have Macy escorted from the building.

We end with Macy confiding in her family about her humiliation. They talk about the different microaggressions they go through daily. Macy points out the misogynoir, and Harry asks for clarification, even though he was a women’s studies professor and it’s a fairly common term. I’ll handwave it as the writers needing to explain it to the audience, though. Maggie apologizes for making her talk, but Macy says she needed to. Macy says the Shea Group is considering selling SafeSpace, but she’s not giving it up without a fight. I love the intent of this scene, but I would have gladly given two more minutes for a more thorough discussion that didn’t feel like a bullet point list of different sociological terms. The writers can do heartfelt family scenes, and it just felt like they ran out of time here.

Harry says he does have a surprise for them. He takes the sisters back to the Command Center and shows them the second piece of the tablet. Once all three sisters are in the same room, the two pieces glow and join together. Macy looks back at Harry, and she looks so hopeful it’s the answer to their allergy.

This episode was a perfect example of how the show sometimes feels like two shows at war with each other. On the one side, we’ve got this precious show about three women of color who are powerful witches and all the social issues they encounter in the real world. That show is fascinating and talks about real issues that matter. The story is beautiful and it’s a unique show. That’s the show I want to watch every week.

On the other hand, we’ve got Abby’s show. The one where the three leads are constantly shoved aside or twisted into entirely unrecognizable characters to prop up this villain. We’re made to think she can be redeemable, but we’ve been given no reason to accept that. Yes, Abby had a terrible childhood. However, trauma does not allow you to be cruel and face no repercussions. Quite frankly, most of Abby’s actions are not all that different from Lori’s. The show wants us to see that Lori is in the wrong. I don’t understand how Abby is any different.

When the show is firing on all cylinders, it is fantastic. But when the show brings Abby to the forefront, it grinds to a halt and becomes almost unrecognizable. All I can hope is that we’re reaching the end of Abby’s storyline. Poppy Drayton is too good of an actress to be such a frustratingly reprehensible character. And most importantly, the Charmed Ones deserve better than to be sidelined on their own show.

How are you feeling after this episode? Find us on Twitter @capeandcastle to share your thoughts on Charmed 3×08! Be sure to check out our site for more content!