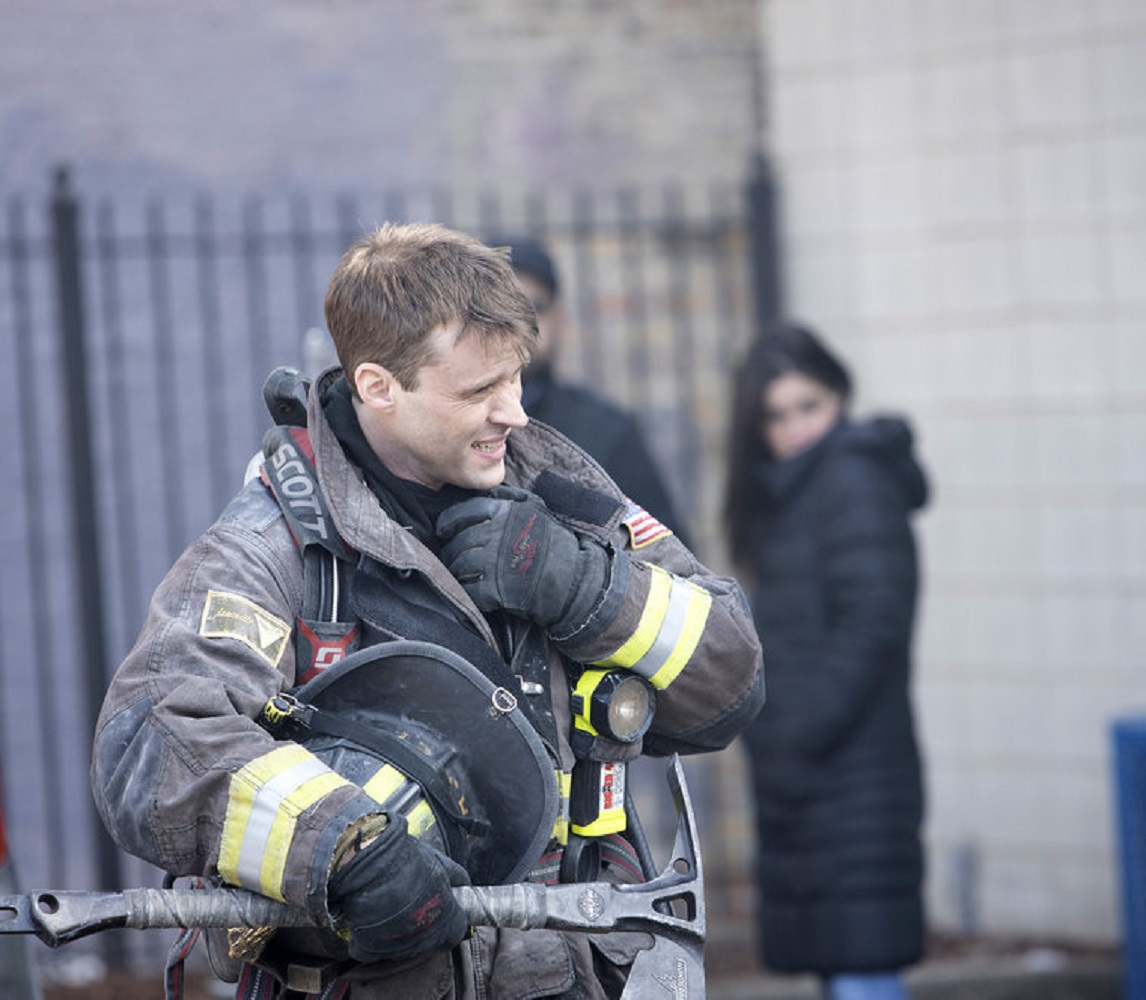 Titles like this one really freak me out. Our crew deals with enough crazy shifts on a regular basis. So when the title emphasizes it? Yeah, I panic before I even see a clip of the episode! Between Matt’s head injury and Sylvie possibly finally finding a permanent partner, I was definitely feeling a wide range of emotions with this one! So keep reading for my Chicago Fire 9×10 review!

Frustrating isn’t even the right word for how Matt has me feeling at this point. And Gallo made a great point when he confronted Matt. How is Gallo, or anyone else for that matter, supposed to be able to trust Matt if he doesn’t trust them enough to let them know what’s going on with him medically? Besides the fact that him being out on calls is going to catch up with him. Sometimes he seems to be okay, and other times not so much. But what happens at those times that he doesn’t do well? What if Matt is in a situation that can go badly very quickly, aka every situation on shift, and his head starts bothering him? 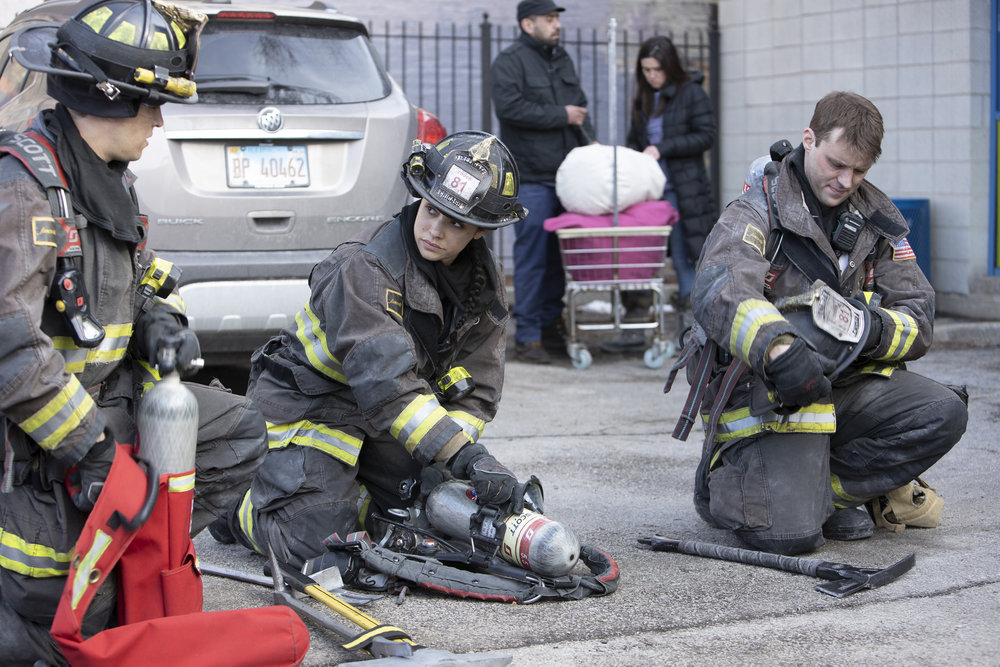 The situation just has danger written all over it and it’s driving me nuts. I also can’t believe he actually played the “I have a friend who” card with Will. And it had me wondering if Will really bought that. Either way, I am glad that Will gave Matt some sound advice in telling him that he better tell his “friend” to get checked out. Because head injuries aren’t something you want to mess around with. Thank you! Finally. Thank you, Will. That’s not something I think or say often, but there it is. Matt needs to freaking get himself checked out and find out what he’s looking at and what the options are. Before he puts himself or his team in unnecessary danger.

This episode went a long way toward helping me decide how I feel about Violet. And I think I actually really like her. The dynamic between her and Gallo is certainly interesting to watch and I think it’s going to continue being that way. But there was also a pretty great dynamic between Violet and Sylvie. It’s one I’m interested in seeing explored. If Violet freaking sticks around, that is. And I know that sounds jaded, but jeez, these paramedics are coming and going so fast, I feel like I’m getting whiplash from it!

I’m still sad about Gianna being gone. Hell, I’m still sad about Emily being gone. There are a lot of paramedics I’m sad about being gone. But I’m trying to push those feelings aside to give Violet a real shot. And while I was excited to see something develop between Gallo and Gianna, there is some history between Violet and Gallo. There’s also some serious chemistry between the two. And if that’s the way they go with it, I definitely think I can get on board with it. At least we didn’t watch Gallo and Gianna develop a deeper and more serious relationship before she got ripped away from us.

Why am I not really surprised that Mouch possesses bagpipes? And can even kind of play them. Kind of. I’m also not really sure why Mouch would want to be in a fire department funeral band. But get on with your bad self, Mouch. If that’s what he wants, I say go for it. Also, it was absolutely freaking hilarious to see Mouch recruiting some of the others to make a TikTok video to audition! That was amazing! Of course, the audition didn’t go over that well. But we were proud of Mouch and the others anyway. Plus, the judges did say they were going to play it for a conference being held in Chicago. So that’s something, right? 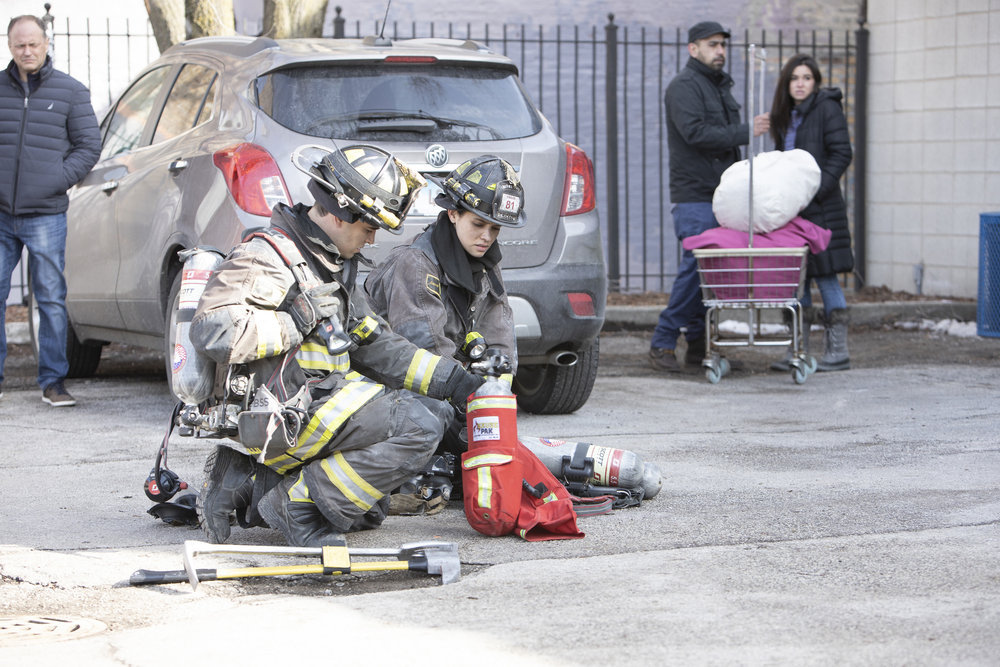 What did you think of Chicago Fire 9×10? What do you think is going to happen with Matt’s head injury? Do you think that Violet is going to stick around and stay partnered with Sylvie? If she does, what do you think is going to happen between Violet and Gallo? Were you surprised that Mouch knew how to play the bagpipes? Does anything about Mouch really surprise any of us anymore? Find and follow us on Twitter @capeandcastle to share all of your Chicago Fire 9×10 thoughts with us! Be sure to check out our site for more content on all things Disney and beyond!