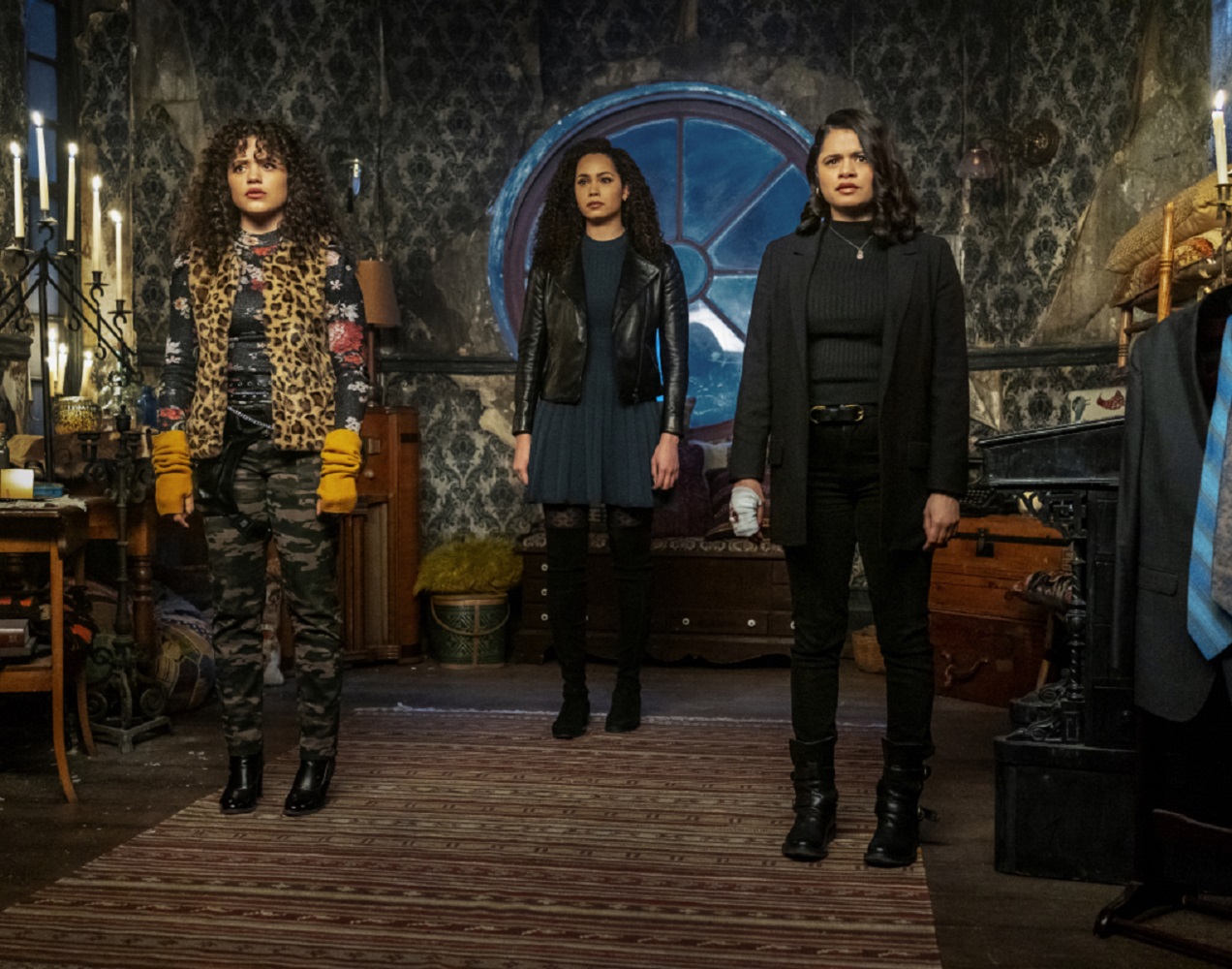 Previously on Charmed, Mel butted heads with the dean. Macy inherited SafeSpace from Julian and wants to open a free legal clinic. Maggie had a premonition of waking up in bed with Antonio. Harry got possessed by a magical orb and discovered the ancient creatures they’re battling are fugitives from a magical Alcatraz. This week, we’re in store for a totally trippy episode that I truly loved. Keep reading for my Charmed 3×07 review!

“This Fun House Is Not Fun”

Maggie is sitting in her room listening to a guided meditation. She is wearing a floral print top with camo pants, which is a distinct fashion choice. She imagines Antonio standing in a towel in her doorway and opens her eyes. Trying to shake it off, she goes to search for her family but finds no one. She ends up in Safe Space, now with a leopard print vest on top of everything. There are just so many choices in that outfit. Regardless, it is clear from minute one that something is off. It’s completely disorienting. The cinematography throughout this episode feels so dystopian and is so distinctly different from other episodes. I cannot commend director Menhaj Huda enough for his work.

Macy wakes up in her room and walks out into Safe Space. Instantly, she starts recording her observations like the precious scientist she is. She sees blood on the floor and goes through a door into the backyard of the manor, finding a broken window.

We catch up with Mel, who opens the front door of the house. She sees a framed picture of some random white guy. Grabbing a stiletto as a weapon, she goes after a noise and finds Macy. She tries to walk into the backyard, but it resets her to Safe Space.

Eventually, Macy and Maggie are able to stay in the same spot. They start trying to analyze if they’re in a dream. However, Mel punched a window to determine if everything was an illusion. Macy scolds her and says they need to stay calm, but Mel tells her not to get irritated. This is one of the first Macy/Mel scenes we’ve gotten in a while, so I’m just sitting here and enjoying their interactions. I love their dynamics when they’re together, and we don’t get nearly enough of them. 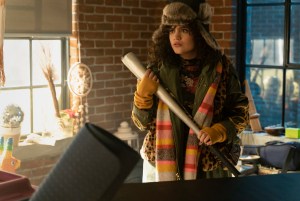 They end up in the gym at Safe Space and find Maggie sitting in a fort. She has added a scarf and furry hat to her ensemble and has clearly gone a little cuckoo. We got Harry acting deranged last week, so it’s Maggie’s turn this week. I adore the way Sarah Jeffery plays this scene. It’s so fun and off-kilter. She still has Maggie’s innocent playfulness, but the rest of her demeanor is so different. Maggie reaches out with a baseball bat to poke Mel and is excited to see she’s a real person.

A bright light goes off as Maggie puts on sunglasses. She tells her sisters they have to be ready for the “tick-tick boom.” At this point, Maggie says she’s been in this world for “42 sleeps” and there have been a lot of “tick-tick booms.”

Maggie leads them downstairs to “the gathering place,” which is the Safe Space cafeteria. She adorably moves aside a bucket with a face drawn on it, and says, “Now there are real friends to sit on chairs.” I cannot express enough how adorable Crazy Maggie is. Maggie talks about how the space changes things. She says she’s been taking notes and pulls out one that says “sexy jock man in towel,” an obvious callback to her earlier vision. Mel and Macy introduce themselves to Maggie. Mel’s name doesn’t spark a memory, but Macy’s does. Maggie finds a lunchbox with “Macy Vera” written on it.

She has a memory of bringing Macy her lunch box at Safe Space. Jordan got approved to do pro bono legal hours and is excited to tell Macy. She breaks the news that the Shea Group board turned down her funding proposal. Maggie reassures her that “You haven’t failed, you just haven’t succeeded yet,” which was one of my favorite lines of the episode. They get a text from Mel that she figured out how to get into the monster prison. The memory ends as they go to meet her.

“We’re Going on a Glitch Hunt”

They end up back in the Command Center as more of Maggie’s memories start to come back to her, except for how they got there. They realize that if they stick together, they can keep their memories. Maggie looks down and realizes the lunch bag says “Macy Vera,” which is wrong because Macy’s last name is Vaughn. The space resets and the sisters are separated again.

Mel is back in the manor and is melting into the hardwood floor, which has taken on a quicksand-like quality. Macy is still in the Command Center. She gets reset to the bottom every time she tries to climb the stairs. As Mel and Macy keep trying to get out of their respective spaces, their memories start to fade. Mel keeps falling through the floor. Macy pulls out her phone to take notes but ends up just adorably dancing to some music.

Maggie ends up in her room. She looks down and sees a Polaroid of her and Antonio, but she realizes that never happened. She closes her eyes and has another memory of Antonio asking her for coffee, but she awkwardly rebuffs him. Macy is there and asks her what that was about it. Maggie says she had a premonition she doesn’t want to come true, but now she can’t stop thinking about Antonio. She laments, “This was supposed to be the Year of Me, not the year of me focusing on another guy.” And amen to that. I am all for Single Maggie for a while, and then definitely not Maggie/Antonio. Macy tells her, “When you focus on your fears, you end up running into them. When you focus on your goals, you end up manifesting them.”

Maggie opens her eyes and realizes that’s how they get out. She hears Mel calling for help and goes running. Maggie finds Macy first and pulls her back before they go to get Mel for a “glitch hunt.” The prison is misinterpreting their memories. It doesn’t understand context and emotions.

Mel goes back to the framed picture and remembers him. He’s an academic observer Dean Eldon put in Mel’s classroom. Mel tells Dean Eldon she feels like she’s retaliating against her because Mel didn’t want to teach her book. A mediator gets involved and asks Mel to sign an NDA about the incident. Mel refuses and goes straight to Speakers Corner to make an impassioned speech about what happened, stating this “is how fascism starts.” I’m cringing from my couch about all the ways this is going to blow up in her face. 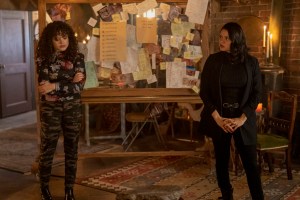 Mel wants to stop the memory but keeps focusing until they’re back in the attic. She figured out the chant to open the monster dimension. They try it, but nothing happens. Mel gets a notification that her speech got posted on “DirtDish” because of course, it did. When you start yelling in public, always assume you’re being recorded. Mel and Macy start arguing. Macy accuses Mel of being hotheaded. Mel says Macy doesn’t fight hard enough for what she wants. They walk away, leaving Maggie alone. She tries the chant again and then walks towards the rift in the dimension all by herself. Friends, always use the buddy system when trying to travel between dimensions. Otherwise, you’ll end up alone for 42 days.

Back in the prison, the sisters try the chant again and are able to open the dimensional rift. They walk towards it together and are back in their house again, so they think it must have worked. However, there are still 20 minutes left in the episode, so there’s no way it worked. Mel realizes something is wrong because there’s a framed picture of the three sisters with their mother, which is impossible. That glitch was particularly heartbreaking. Another “tick-tick boom” happens. They realize they’re still in the tomb.

“Fog Is Nothing More Than An Illusion”

Maggie rallies them together and points out they’re a family. Macy puts it together that the “tick-tick booms” are monsters escaping through the rift, so that’s their way out. Maggie thinks back to the guided meditation from the beginning of the episode, as well as Macy’s earlier words of advice.

They focus their energies together and are able to break through the illusion of their house to the reality of the monster prison. A rift opens behind them and they run towards it. They get closer, but the Chupa-Alma blocks their escape. Maggie points out they defeated the Chupa-Alma. She says they have to run through it to get out because it’s another glitch. They do and are deposited onto a street outside an electrical plant in Seattle.

Harry just strolls up to them and says, “You did it. You’re home.” This was the single most baffling moment of the episode to me because Harry was way too chill. We all know that Harry is super dramatic, so if his family and his self-professed “woman of his dreams” were going into a monster prison together, I would think he would be a little more emotional about their return. Even though they’ve apparently only been gone for 4 hours, he acts as if they just got back from the grocery store.

There was something so off about that scene that I am still convinced that was not Harry. He seemed more Harry-like by the end of the episode, but that scene was so jarring. They seal the interdimensional rift with a Babylonian spell Harry found in the Book of Elders. I am skeptical of this spell, based on the fact Harry found it and he was so weird earlier.

Mel is positive she’s fired, so she goes to clean out her office. Kevin walks out and delivers the news that her rant got Dean Eldon “canceled.” The students all protested so the school put her on leave. I flat-out laughed at the thought one trending video could get a tenured professor put on leave. She did deserve it, though, so I decided I’m okay bending that reality.

Macy meets with the Shea Group representative about her proposal to fund the free legal clinic by charging Safe Space tenants for kombucha and coffee. She gets pushback that the free drinks are a part of their brand. Macy says the tenants are all fine with it because she already checked with them. She gets the brushoff that she’ll have to run it past the board. Then Macy drops the bomb that she’s already announced it on their social media and she worries how defunding a legal clinic would impact Safe Space’s brand. And I applaud from my couch. I love when Macy gets to be a boss like that.

The sisters sit together at home and try to figure out their next move. Harry points out that if another monster escaped with every rift, then they’re going to see a lot more ancient creatures. There’s a pounding on the door as Jordan is frantically trying to escape something large with claws that is outside the house.

And that’s where we end for this week. What did you think of this week’s episode? Were you excited about all the sisterly interactions? Are you like me and convinced that Harry is still not quite Harry yet? Find and follow us on Twitter @capeandcastle to share your Charmed 3×07 thoughts! Be sure to check our site for more content!