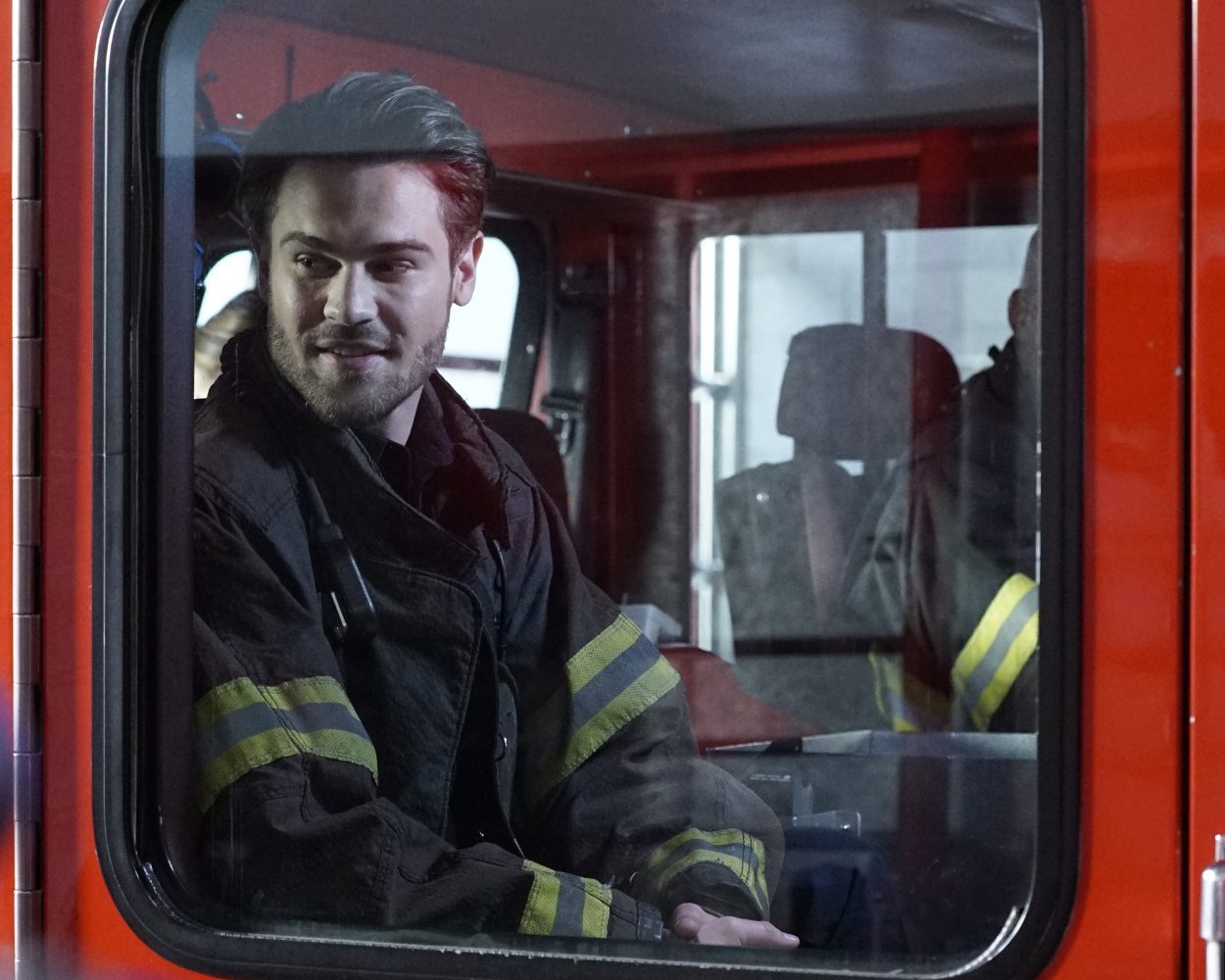 Previously on Station 19, Dean decided to sue the police officer who shoved him, Travis found his dad on a gay dating website, Jack moved in with Inara, and Vic started flirting with another firefighter. Meanwhile, on Grey’s Anatomy, Andrew died. Keep reading for my Station 19 4×07 review!

The episode starts off with Vic going for a run in the hopes of finding her firefighter crush Ruiz. She sits down on a bench, disappointed, only for him to join her. They both admit to jogging up and down the trail looking for each other. As they talk, his fingertips brush against hers in the most sexually charged fingertip brush I’ve ever seen. He might be winning me over a bit.

Andy and Sullivan share breakfast in bed. She tells him Maya appointed her acting captain. Sullivan makes sure she is not going to give him any special treatment. However, throughout the workday, he will absolutely request special treatment and then accuse her of not having his back. Fortunately, Andy will shut him down and remind him she is in charge. I spend most of the episode glaring at Sullivan for his attitude. 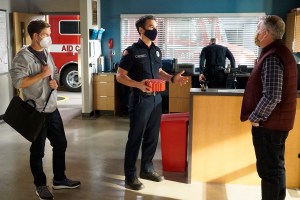 Travis is still trying to get information from Vic about her crush. Emmett is there to do their Covid tests, and he gets in on the teasing. After Vic walks away, Emmett asks Travis if he’s been dating anyone. Travis says the desire kind of died once he found his dad’s dating profile. Speaking of the devil, Travis’s dad shows up at the station. He asks Travis to help him set up some security on his computer because his photo got stolen. Travis is about to delve into that conversation, when the station gets a call and has to leave.

They arrive at a building to find people in identical jumpsuits flailing around while a man stands on the roof, encouraging them to keep vibrating. Dean instantly realizes they’re dealing with a cult. I am so excited. Cults fascinate me, both real and fictional. It all goes back to the ‘Boy Meets World’ episode where Shawn ended up in a cult. My first thought is always to assess the cult, and see if they would be able to recruit me. So, let’s look at Brother John’s cult.

There’s a lot of flailing in an almost interpretive dance way that also suggests they may be on drugs, so that’s a strike against it. However, Brother John is very into tearing down the structures of society that breed fear and shame. The sociology major in me is intrigued by what he has to say, so he would probably be able to get me in the door. The biggest strike against him, though, is that he would require me to stop believing in gravity. He’s trying to convince his followers that if they just believe hard enough, they will help him to fly. Let’s call it the Tinkerbell Theory.

Andy essentially taunts him from the ground, which honestly makes me love her more. She sends Jack to the roof to try to talk Brother John down. He starts by asking Jack to dance with him to help keep up his energy. Jack starts bopping along, which Vic hilariously records from the ground.

Brother John picks up on the fact that Jack is an orphan who feels afraid to love. He’s been struggling with his feelings for Inara and whether he should open himself up to love. Brother John tells Jack he’ll show him what love and fearlessness looks like, which is when he dives off the roof. You can see on some of the follower’s faces the moment they remember gravity exists. However, there was enough time to get the inflatable bag set up to break his fall, so he’s okay.

They get Brother John on the stretcher and put him in the ambulance to Grey-Sloan. Jack asks to ride with him. He asks if Brother John was trying to die. Brother John says he was trying to fly, that he leapt and “had a moment of pure freedom.” Jack decides to take that as a hint. That night, he goes home and immediately kisses Inara. He asks Marcus if he can be his mother’s boyfriend. Marcus adorably signs, “I thought you already were,” and I cheer from my couch.

“Heroes Don’t Have To Fix Their Faces”

The police respond to the scene with Brother John, including at least one of the ones who was there when Dean was shoved to the ground. Vic reminds Dean they can’t touch him in uniform, which he says is part of the problem.

Dean and Vic attend to a guy who fell off a stump and dislocated his shoulder. He claims not to be on drugs, but based on the fact he licks Dean directly in the center of the forehead, I suspect he’s lying. Dean goes to clean himself up. One of the officers comes over to apologize for what happened. He says he reported Officer Schneider, who is currently suspended. Dean reminds him he also stood by and did nothing to help the girls in that house, so the apology is not enough. In the background, we see a white male cult member launching himself at a police officer. All the police officer says is, “Please get your hands off of me.” Just another reminder of the differences in the ways the police treat people based on race.

Back at the station, Dean says he decided not to take the lieutenant exam because the only part of his job that isn’t corruptible is the part where he’s actually helping people. If he climbs the ladder, he gets entrenched in the system, and everything stays the same. He points out that Sullivan and Chief Gregory got seats at the table, but nothing changed. In order to help Joyce, he needs to put his career on the back burner for a while.

In a moment of levity, Dean says he can’t believe a guy licked his face. Vic jokes that she can’t believe she was jealous. She decides to call Ruiz. At first, he seems like he’s in a rush to get off the phone, so my first thought was that he had a girlfriend. Fortunately, I was wrong. He was actually showing up at the station with flowers for Vic. They adorably ask each other when their next Covid tests are and make plans to go out the day after.

“You Forget How To Breathe”

While everyone else is dealing with the cult, a man named Jerry shows up with an injured hand. He cut it while using a fabric cutter. Jerry has HIV, so he’s scared to go to the hospital for fear of getting Covid. At first, Warren says he can’t help Jerry. But we all know Warren can’t turn anyone in need anyway.

While Warren is patching up Jerry’s hand, Jerry talks about how the Covid pandemic has reminded him of the AIDS crisis in the 1980s. He talks about how scared he’s been. Eventually, Warren starts to confide in Jerry about losing Bailey’s mother and then about losing Andrew. Jerry talks about how it can feel to drown in your own grief, and how important it is to find your life preserver. That one thing that will keep you afloat. Jerry tells Warren he imagines his life preserver is medicine. This was a sweet storyline that I imagine is going to lead to Warren continuing to fight for the mobile surgery unit.

“Give Me Your Guilt”

Maya is out on bereavement leave with Carina, who is not doing well. She has declared the bed and couch “too soft.” Any bit of comfort makes her want to cry. She starts off lying on the kitchen floor before moving into the shower and just staring. Maya encourages her to scream out her grief, but every time she tries, she can’t get out more than a pathetic whimper. Stefania Spampinato absolutely kills it this episode. Her grief is like a visceral gut-punch, and I kept tearing up along with her.

Carina realizes she needs to tell her father about Andrew’s death. Then she lists off all the other completely mundane things that happen when someone dies. Letting his landlord know, calling the bank, planning the funeral. She gets overwhelmed and ends up back in the shower. While she’s in there, Maya deals with all the logistical things. You can tell that Carina has always been the one to take care of things, so it’s overwhelming for her to have someone take care of her. 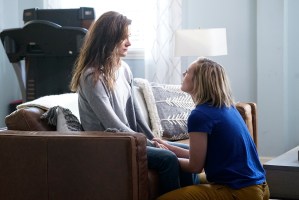 Later, Carina has a breakdown and feels like it’s all her fault that Andrew died. She talks about how she should have stopped him from getting on the train. Maya consoles her and then has my absolute favorite sentimental line of the episode. As Carina is sobbing, Maya tells her,

“Give me the guilt, okay? Give me the blame, give me the part that stings the most. Let me hold on to it for a little while. And when you’re feeling a little stronger, you can have it all back.”

Carina instantly starts sobbing harder as Maya realizes she was “too soft.”

After a while longer, Carina finally decides to call her father, only to find out he found out about Andrew’s death two days earlier. He just never bothered to call Carina and check on her. She’s almost ready to scream after that. Maya takes her to the fire station and turns on the sirens, drowning out the noise as Carina finally lets out the scream she’s been holding in all episode. It turns into sobs, and I am absolutely not sobbing from my couch, I don’t know what you’re talking about. Carina ends the episode finally able to sleep in a bed again as Maya holds her.