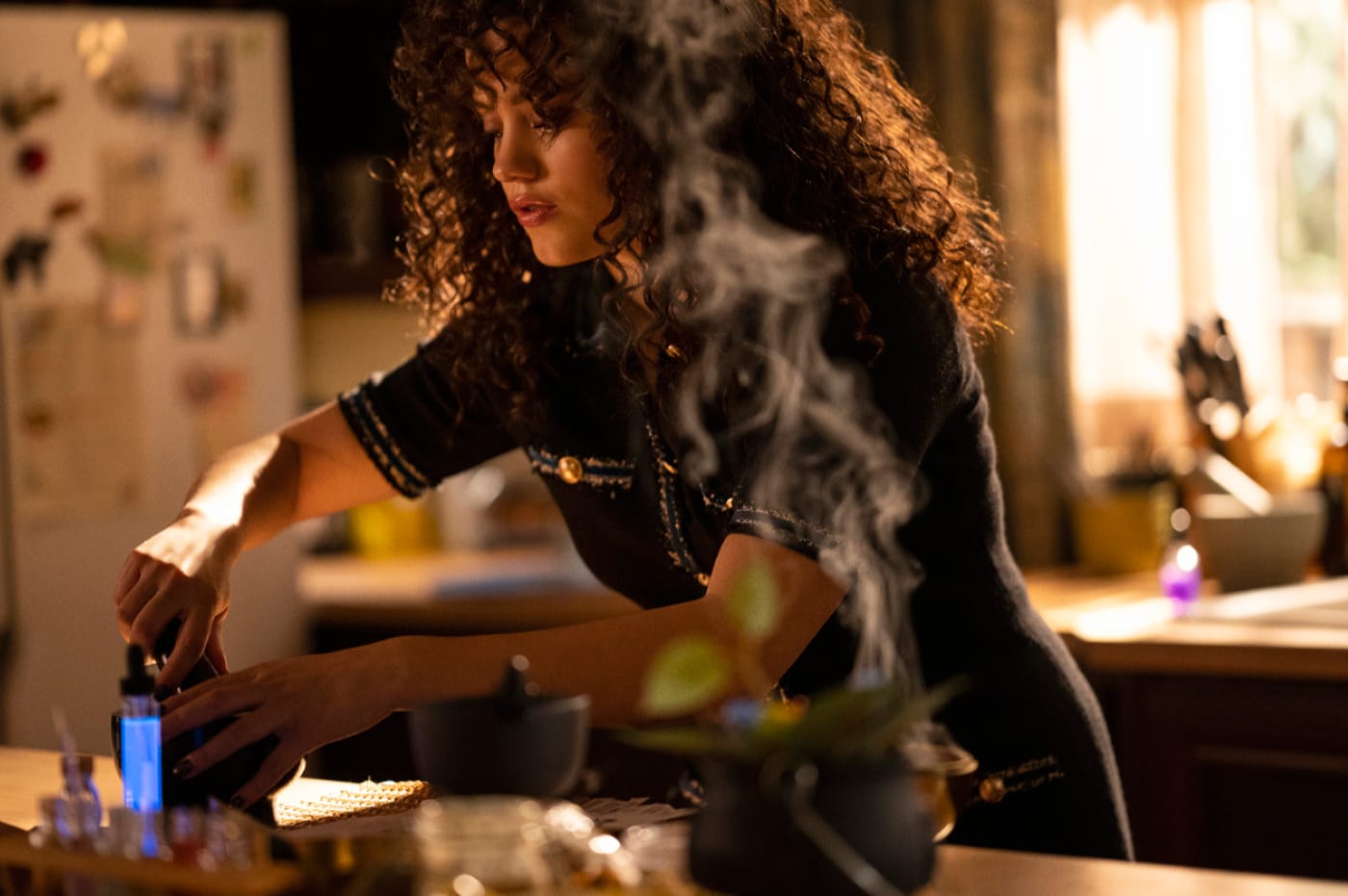 This week’s episode of Charmed was heavy on romantic relationships while making a major breakthrough in the mystery of the ancient creatures. Maggie has been keeping up with the videos Elliot Larson, Alien Hunter has been posting since the last episode. She noticed a symbol in the background of one of them. Macy goes after Elliott, while Mel has a coffee date with Ruby and Maggie has school obligations. Let’s break down each sister’s story from here. Keep reading for my Charmed 3×06 review!

Mel and Ruby meet up with each other for a coffee date, still unable to touch due to Mel’s allergy. When Mel sees Ruby hug her friend Bella, jealousy rears its ugly head. Ruby reassures her Bella is just a friend who bakes her awesome muffins, but Mel is still worried. Meanwhile, Abigael pops back in to ask for a favor. She is the Demon Overlord once more and something is trying to kill her. Mel reluctantly agrees to help Abigael out and keep an eye on her while she sleeps. But she gets caught up in stalking Bella’s Instagram and misses Abigael’s bed catching on fire. 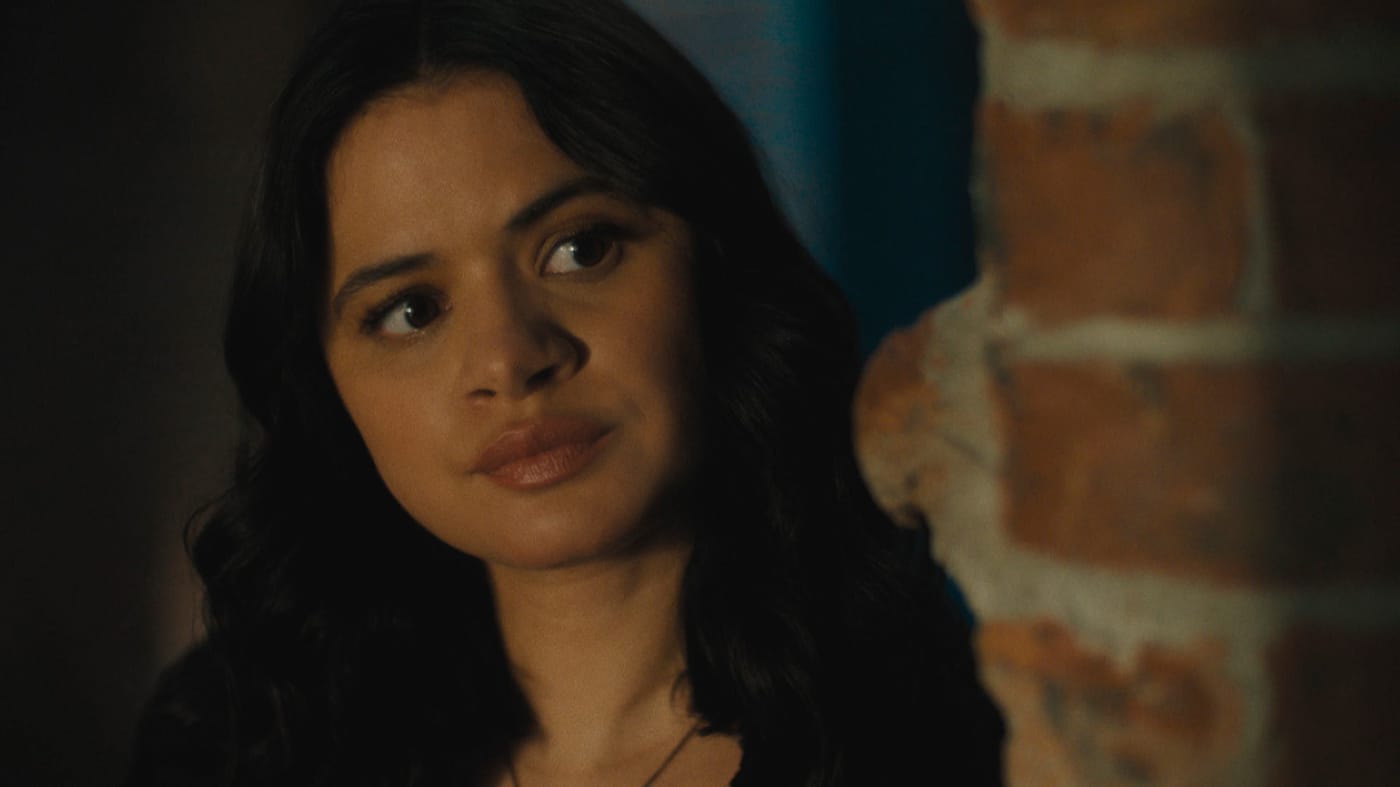 Mel takes Abigael back to the manor. Ruby shows up because Mel didn’t answer her text, and she was worried. Abigael pokes her head out, triggering an argument between Mel and Ruby. Mel throws Bella in Ruby’s face. Ruby tells her she’s clearly looking for an out, so she’s giving her one. And I glare at the TV for fear they’re breaking up my beloved Melby. After Ruby leaves, Mel tells Abigael she gets one night on the couch, but then she’s on her own. Later in the night, the sisters discover Abigael is turning into her demon form and trying to kill herself in her sleep. Mel yells at her to wake up then takes her home.

Abigael explains her mother stripped her demon form and placed it in a totem. Jordan got it back from her sister, who wants nothing to do with her. While Abigael’s childhood is admittedly horrific, it doesn’t give her a pass on her actions. She’s never taken accountability for trying to kill Macy or actually killing the other witches at the beginning of season two. It will forever be my frustration with her as a character. I was very worried this episode would be the end of Melby in favor of an Abimel pairing. But the writers turned it around. Ruby and Mel end the episode in the backyard, talking about their insecurities while they share Bella’s muffins. They inch their hands as close to each other as they can in a perfect parallel to the Harry/Macy scene in the backyard from a couple of weeks ago.

Maggie starts out excited for her movement therapy clinic for her psychology internship while Jordan goes to say hi. Maggie assumes her volunteers stood her up, but Jordan points out all the names are jokes. With names like “Anita Bath” and “Hugh Jass,” she probably should’ve picked up on that earlier. Naturally, she assumes it was her self-declared “nemesis” Antonio’s fault. Maggie takes vengeance by magically altering all of Antonio’s flyers for his internship group. As we can all anticipate, Antonio had nothing to do with it. It was actually a fraternity prank. 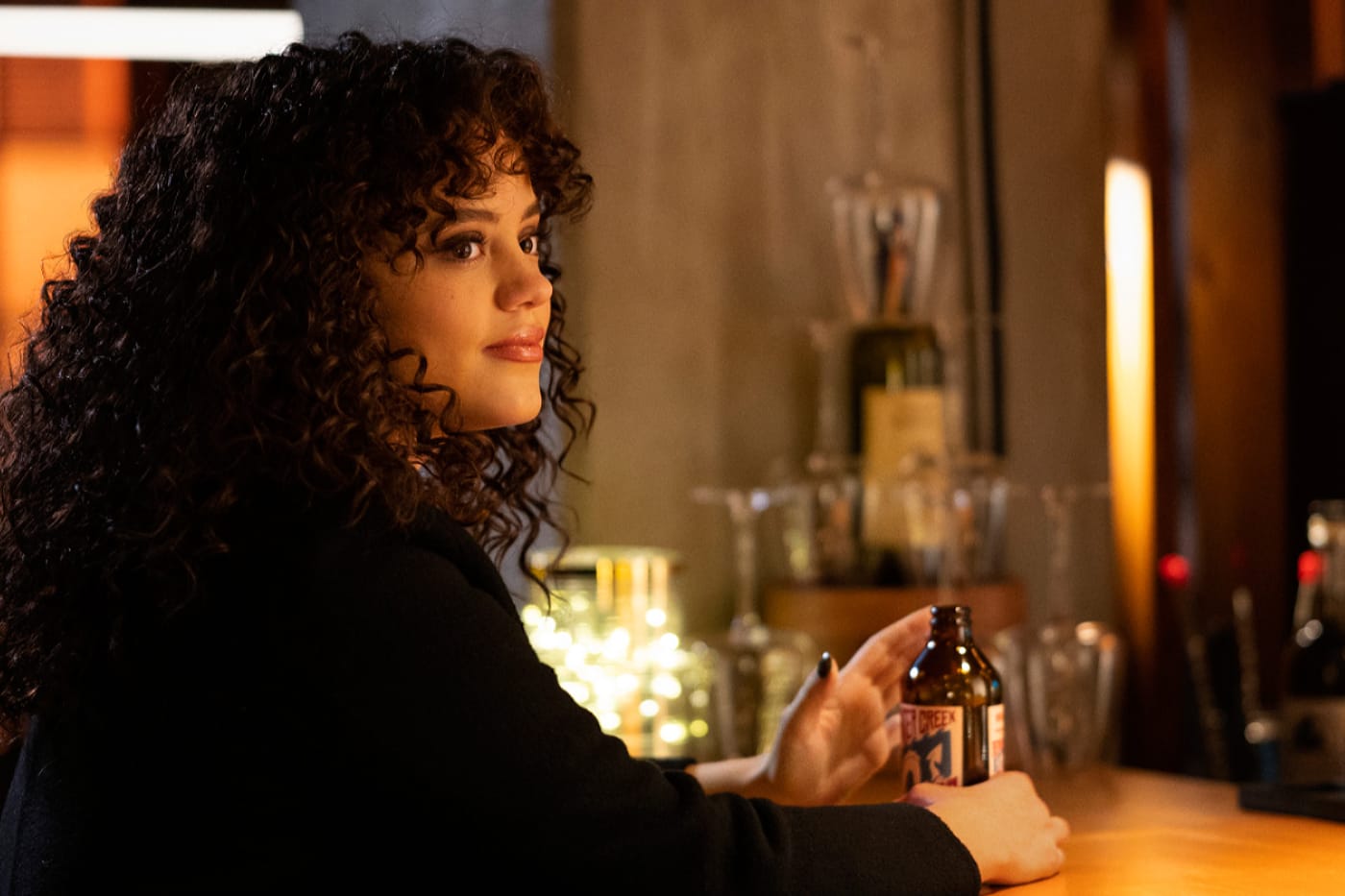 Maggie and Jordan end up at the bar at SafeSpace. Maggie talks about how she let her insecurities get the best of her. Instead of just being there to give her a pep talk, Jordan confides in her that he doesn’t like the things he has to do for his corporate law firm internship. It’s a nice change from where Jordan is just constantly reassuring Maggie about her insecurities. They’re on equal footing here, which is what I want for a romantic pairing.

Jordan brings up the moment between them and asks what she wants. Maggie tells him she’s seen how hard it is for Macy and Mel to have relationships with Harry and Ruby, so she wants to focus on herself for now. Jordan tells Maggie she’s a “bright, shining star” and he understands. And I once again ask for a flashback to the moment where they got “close” because my Joggie shipping self needs it.

The next night, Maggie invites Antonio out for a beer to apologize. She finds out he thinks she’s his nemesis due to her confidence and her natural way of connecting with people. She asks why he always talks over her. He says he grew up in a family where you had to yell to be heard. They decide not to be nemeses anymore. Then Maggie has a premonition of waking up in bed with him, and I yell “no” from my couch. I’m really hoping that’s a misdirect. It’s Year of Me, then Lifetime of Joggie. I will accept nothing else.

“I Need a Partner in Crime”

Macy goes to the Command Center to open a portal to go after Elliott Larson. She finds Harry doing research and says she needs a “partner in crime.” He smiles and says “always,” and I melt a little bit. They pose as a couple that has been abducted by aliens.

Elliott makes a comment about them being married. In a perfect callback to the season one episode where they’re mistaken for a couple at Galvin’s party, they say they aren’t married. Elliott says Harry’s too old for Macy. The comments about Harry appearing so much older than Macy don’t make sense because he stopped aging at 37 and Macy is about 30, so there’s not a massively visible age gap. Also, all the scenes of Harry’s back cracking don’t make sense because again, he’s immortal. I’m hoping it’s setting up a larger storyline and isn’t just a lazy joke about him being old.

Elliott has some sort of magical orb Macy asks about, but he gets very upset when Macy tries to touch it. Macy creates a distraction so they can steal the orb and leave. Back at the Command Center, Macy and Harry realize there are symbols embedded in the orb. She comments on how well they work together before getting called away to deal with CEO stuff for SafeSpace, reassuring Harry he always solves their problems. Then because Harry has never seen a television show before, he actually says the words “I wish I had all the answers” while touching a mysterious, glowing orb. Naturally, he gets possessed.

Macy finds Harry descending into madness. The camerawork in this scene combined with Rupert Evans’ completely unhinged acting is wonderful and is my favorite part of the episode. Harry just keeps laughing and muttering to himself, talking about how he can see patterns. He holds onto the orb like he’s Smeagol stroking his precious. 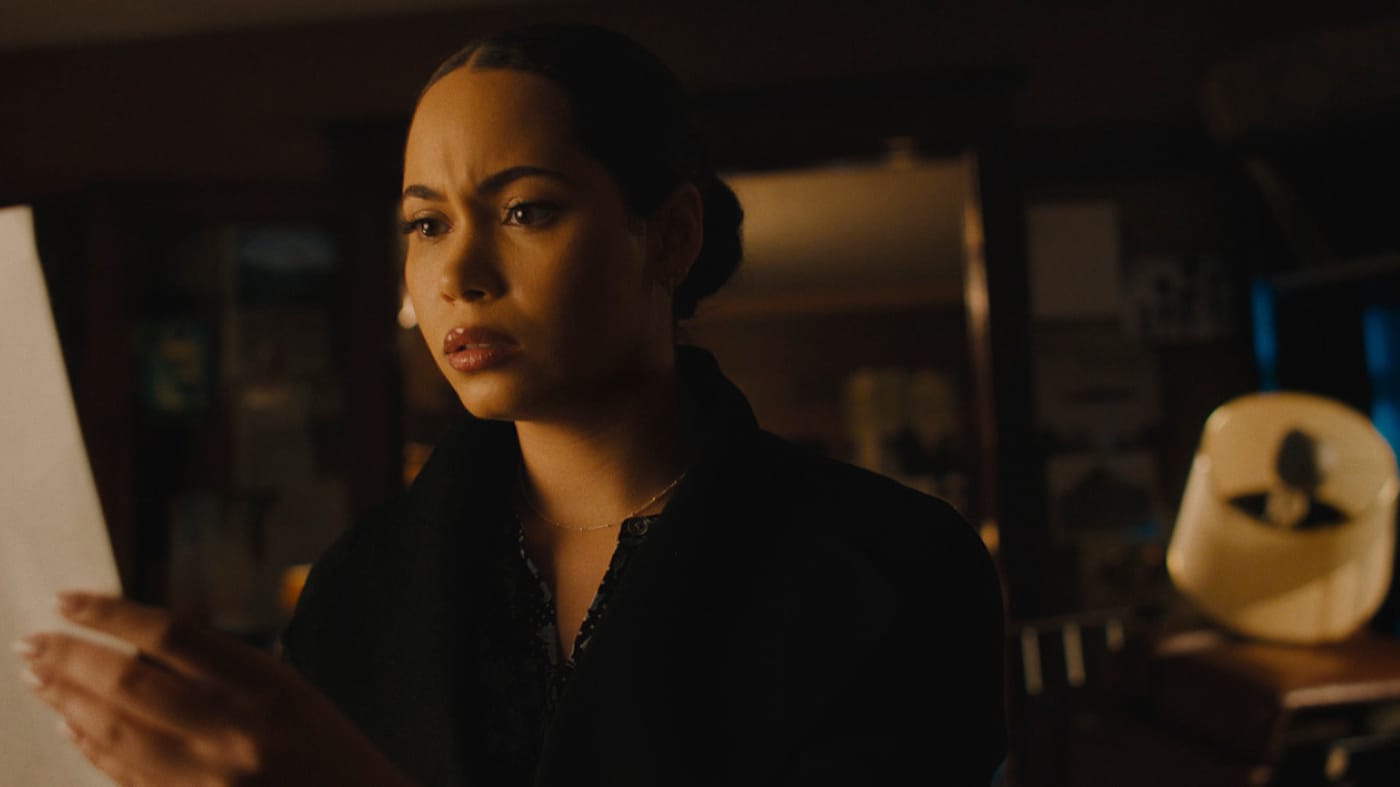 Macy goes back to Lake Tahoe to get answers from Elliott. She tells him she loves Harry very much. That’s the first time we’ve gotten something close to an I Love You from Macy, so I screamed pretty loud at that. Elliott tells Macy the orb is like a drug. Harry will die if he keeps using it. Macy finds Harry madly going through all his drawings, muttering about how it’s the key to finding a tomb. Macy pleads with him to get rid of the orb or he’ll die. He just stops in his tracks and says she’ll die.

In his orb-induced haze, he questions what kind of future they can have since he is immortal. Macy reassures him they can worry about tomorrow later, but they can just love each other today. She asks him again for the orb before she loses him. Once the orb is out of his sight, the connection is broken. Harry points out he “should have known better than to wish for something with an ancient orb at my fingertips.” Macy asks why he didn’t just talk to her. He tells her he didn’t want to be another problem for her to have to solve. The best trend of this season so far has been Harry and Macy having open, honest communication about their feelings. Please keep this coming.

Macy realized his crazy drawings might actually contain a clue. She put the numbers he found into a genetics modeling program and found coordinates for a fifth dimension. When they put the power of the Source into the tree, it blew the door off a “magical Alcatraz,” so all the creatures they’re encountering are ancient fugitives released back into the world.

Personally, I loved the emphasis on each character’s insecurities. It helped to further their individual character arcs, as well their relationships. Nothing felt inauthentic. There was some great open communication between all the relationships, which is all I ever want from a show. What did you think of Charmed 3×06? What mythological Alcatraz fugitive do you think they’ll encounter next? How are you feeling about the state of your ships? Find and follow us on Twitter @capeandcastle to share your Charmed 3×06 thoughts! Be sure to check our site for more content!