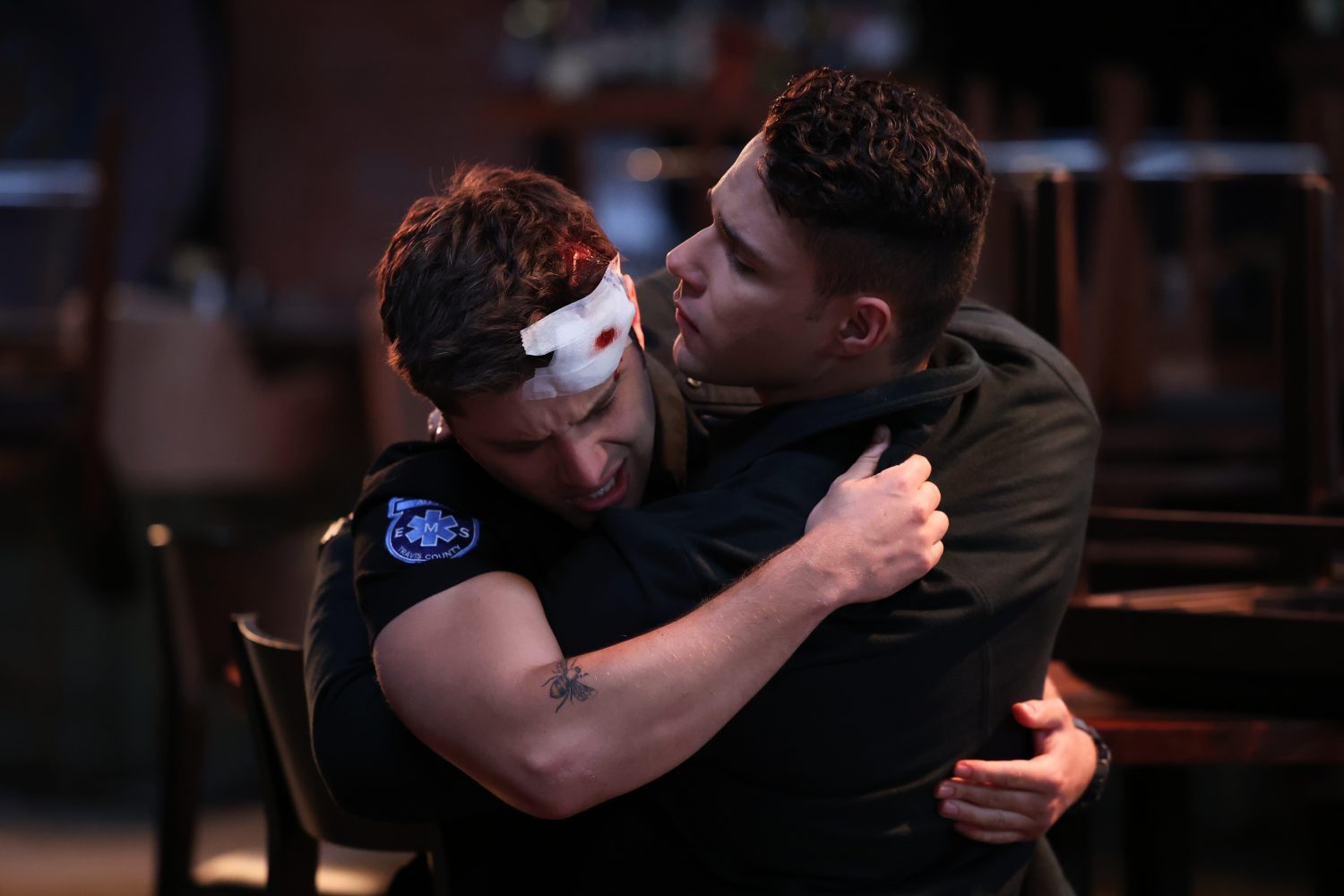 We knew that things were going to get intense with this episode. Between a huge apartment fire, a bank robber with a bomb, and a bogus medical call that led to trouble and danger, it certainly made for one hell of a winter finale! And we are more than a little anxious to see what is going to come next for our characters. April cannot come fast enough for us! And while the dangerous situations and difficult times have a lot to do with that, we also want to see more of the good! Because the scenes in this episode that showed bonds getting deeper and relationships getting more serious have us needing to see more! So keep reading for our 9-1-1: Lone Star 2×08 review!

Every time fire or medical go to a call, they’re obviously in danger. And it often comes from multiple angles. But the calls that our teams were getting this time around seemed especially dangerous. This time it was the fact that the medical call was a setup and things escalated out of control pretty quickly. Sure, the group ended up actually needing medical assistance. But they were not exactly a group of law-abiding citizens. So the pressure for TK, Nancy, and Tommy was even higher than usual. And it had us tense and worried as hell for them and what they were being put through. But they all handled themselves like the complete badasses they are and we have never been prouder of any of them. We stan this medical team! 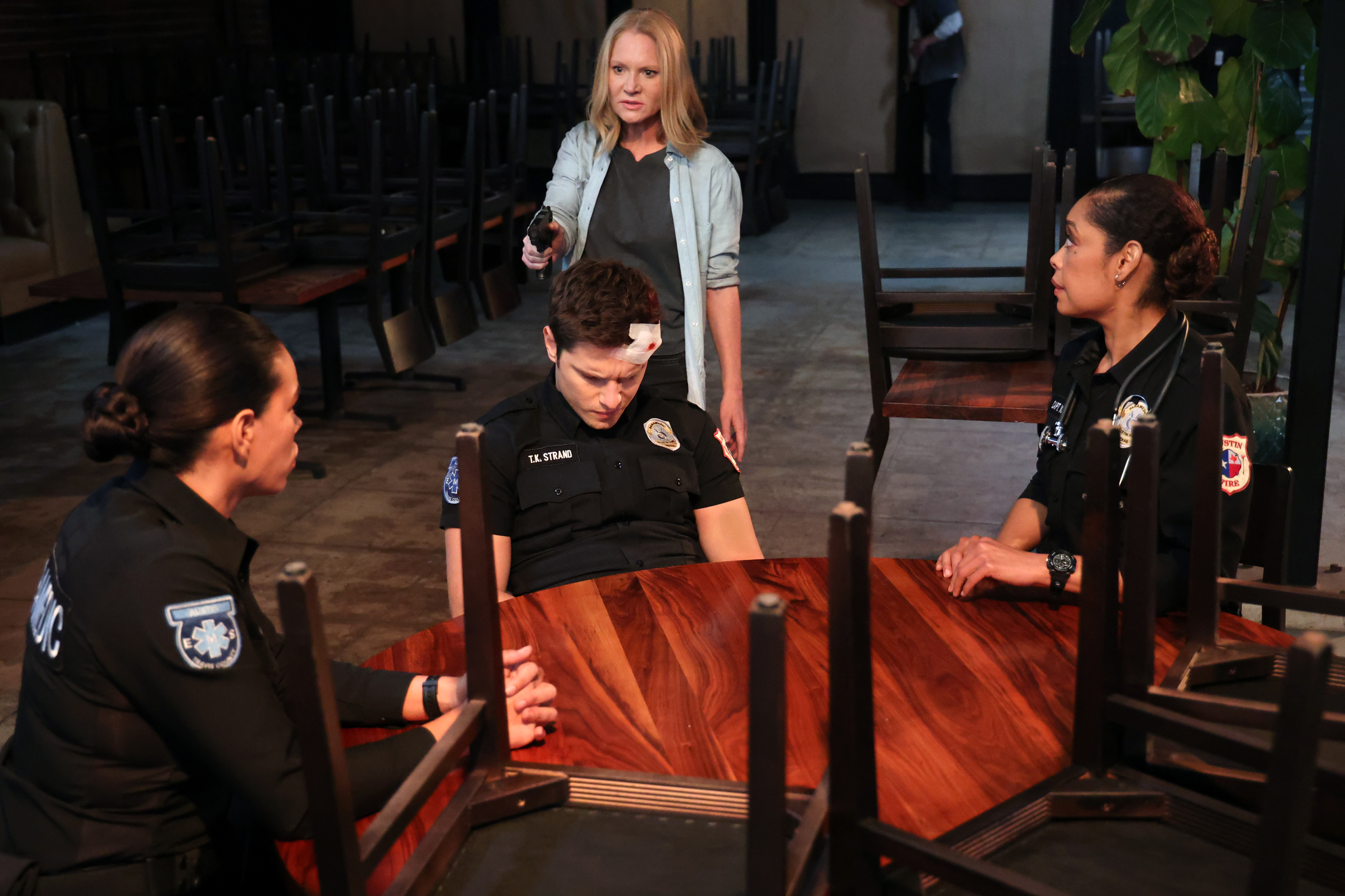 All three of them were making some seriously incredible moves. Tommy brought the situation to her turf by convincing the duo to take the team to the restaurant. And TK dropping his sobriety chip for Carlos to find was the best clue. He knew damn well how thorough Carlos would look into things and had faith in him. Nancy remained calm at every turn and really helped Tommy take charge of the situation along with fighting when the opportune time came. The three of them worked together perfectly in sync. But they weren’t the only ones. Owen teamed up with Carlos and they were a force to be reckoned with and worked together amazingly well. Plus, they had Grace backing them up and giving them info they needed and we all know Grace is always on top of things. And she and Judd better be okay!

Celebrate and Be Grateful

It was not only amazing that TK has done so well in his recovery, but it was great that everyone got together to acknowledge and celebrate. TK deserves all the recognition for how far he has come and we would be lying if we said the entire scene didn’t make us more than a little emotional. But it’s not our fault. 9-1-1: Lone Star always knows how to hit us right in the feels. And this episode seemed to do it even more than usual. We know everyone was worried about TK because of his past, but we had faith that he was stronger than everyone gave him credit for.

But one thing we are dying to see more of is the relationship between TK and Carlos. We were more than a little caught up in our feels with every moment we got between them. Though we will admit that no matter how many Tarlos scenes we get, it’s never enough. We just feel like they’ve gone into the next phase of their relationship and we desperately want to see more of it. Also, can we talk about the moment between Owen and Carlos? Because we’re going to need to see more of the developing bond between the two of them as well. Owen offers Carlos support in the same way that he does to TK and we love it. And Carlos clearly appreciates it. Owen telling Carlos’s father how incredible he is had us grinning.

Carlos was faced with a pretty tough decision at the beginning of the episode. But we think he made the right one. If his gut was telling him to let that man go, then we know it was the right answer. Because we trust Carlos implicitly. But we wish his father had shown more faith in Carlos. Sure, he was there to determined to get Carlos out of trouble, but that wasn’t the point. He shouldn’t have jumped to Carlos being in the wrong. Because he wasn’t. Even if he said all the right things at the end, we weren’t too impressed with him. And we loved watching Carlos proven right. But Carlos wasn’t the only one making some hard choices. Owen was right there with him. The two of them not only figured things out together, but they didn’t hesitate to save TK, Nancy, and Tommy. Also, can we talk about badass Owen with a gun? Because, DAMN! 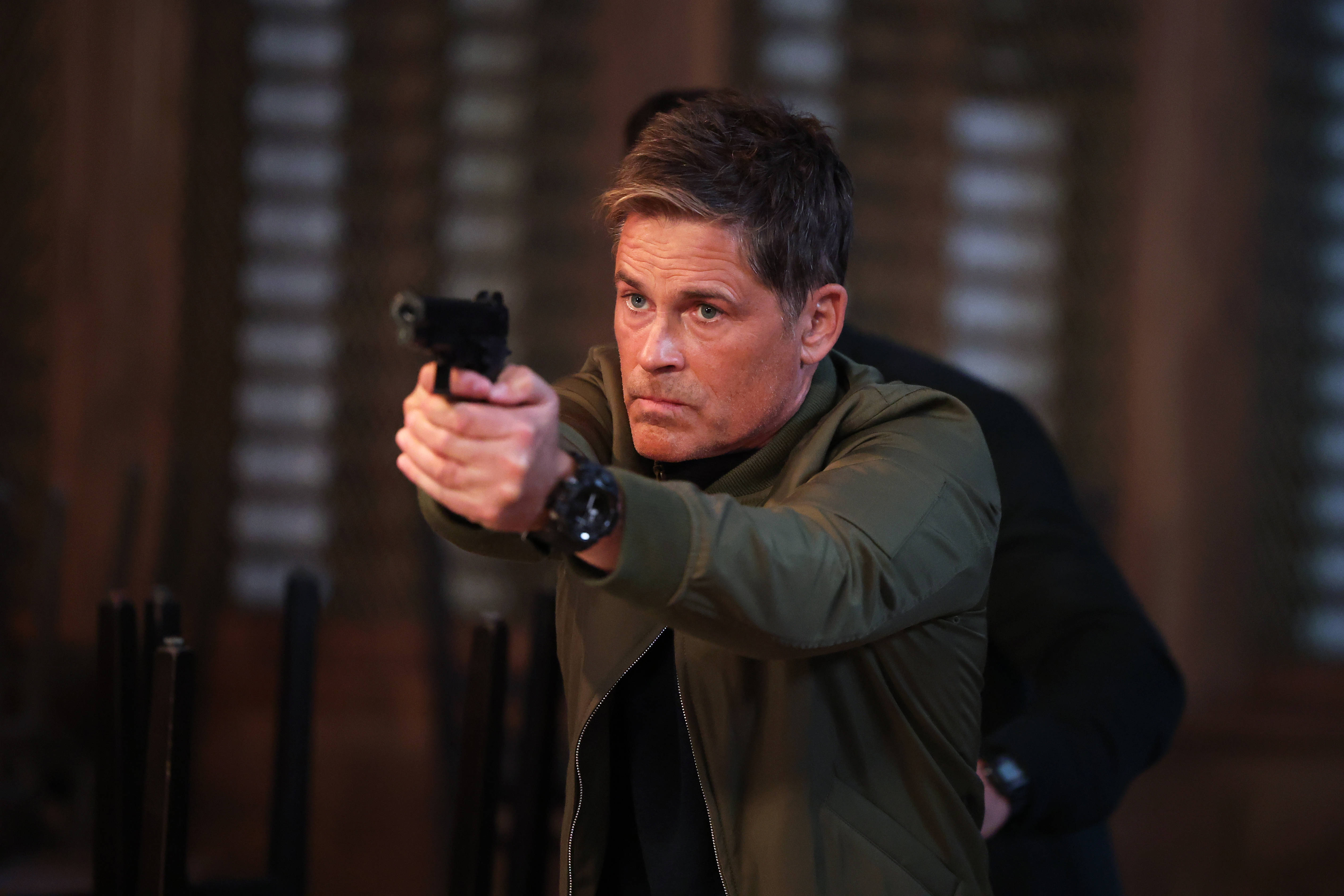 What did you think of 9-1-1: Lone Star 2×08? Are you freaking out about Judd and Grace like we are? They’re totally going to be fine, right? What do you think is next for Carlos and TK? And are we going to see Gwyn again? Or is she going back to New York for good? What did you think of the way Carlos and Owen handled things together? Do you want to see the two of them team up again in the future? Because we know we do! Find and follow us on Twitter @capeandcastle to share your 9-1-1: Lone Star thoughts! And check out our site for more content on all things Disney and beyond!