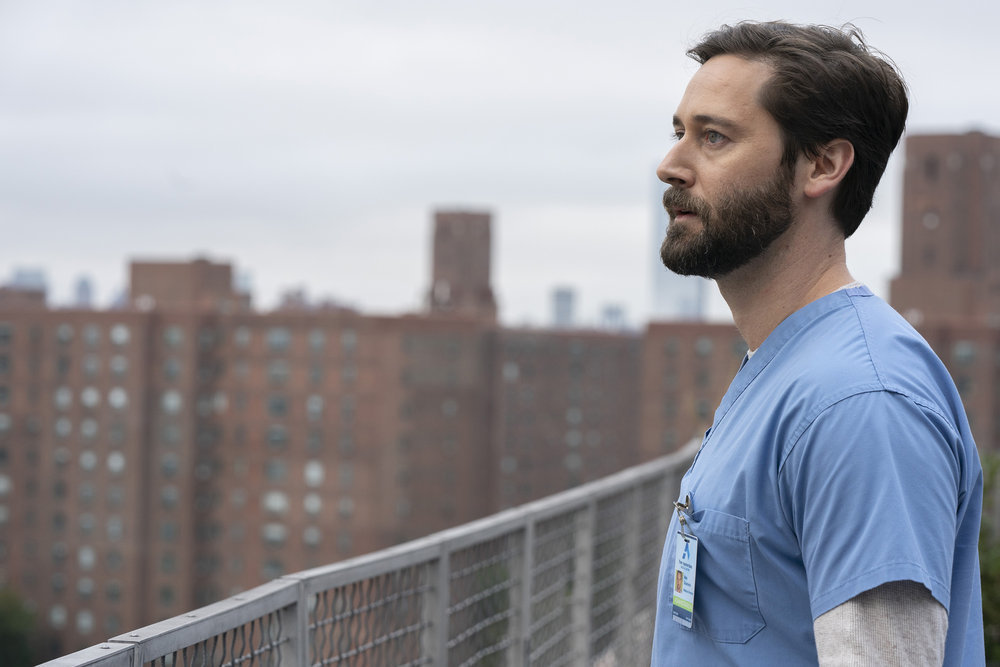 It feels like we’ve been waiting forever for New Amsterdam to return to our screens! But they didn’t hesitate to hit us right in the feels right from the beginning of the season premiere! We don’t think we made it five minutes in before we were tearing up! Honestly, did they have to hit us with that emotional rendition of “What A Wonderful World”?! As if dealing with COVID wasn’t enough, our team was also faced with a plane crash landing right near the freaking hospital! Oh, and we had Max making some moves to help his patients and refusing to accept what other doctors were telling him was the new normal. Just another day with him! So keep reading for our New Amsterdam 3×01 review!

While we loved seeing our team again, it was devastating to watch what they were dealing with on the front lines of the pandemic. The tears in their eyes and the marks on their faces from wearing the masks were enough to send us spiraling into sobbing messes. And then Dr. Kapoor came down with COVID and we were absolute messes. While we have seen and experienced some of what our team on the frontline has dealt with, it still hits us hard every single time it’s shown to us again. But we were glad to see that the premiere didn’t just show the worst of the pandemic. They also showed things beginning to get better. And we think that’s just as important. Because we could all use a bit of hope. 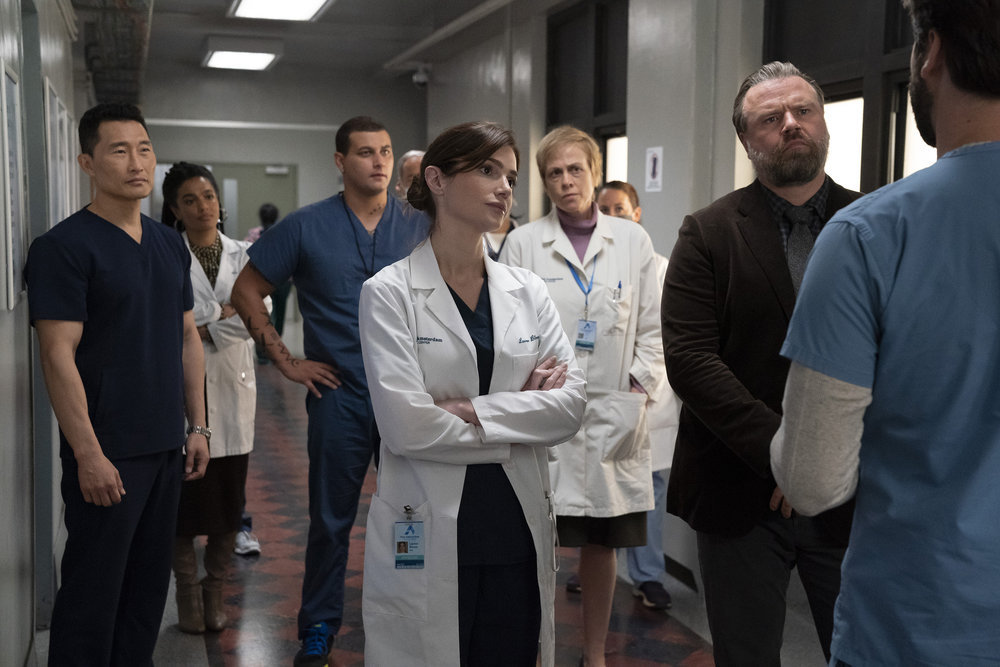 We were so worried about Dr. Kapoor and were hoping that he wasn’t going to be taken away from us. And while there were a lot of other things going on to keep us occupied, we couldn’t stop thinking about Kapoor and how he was doing. Especially since Max was having such a hard time finding the medication that he needed. Even when Max did get the medicine Kapoor and other patients needed, we worried that it was too late. But then Kapoor woke up and we were as relieved as the rest of the team until they said that there was extensive damage to his heart and the surrounding muscle. Which is where Floyd comes in. We have the utmost faith that he’ll be able to help save Dr. Kapoor.

Dealing with a pandemic is terrible enough but everyone had to rally together again as a plane crash-landed extremely close to the hospital. But while they were working to save lives, the NTSB was making things even more difficult as they were investigating the plane crash. Could none of that have waited? We understand that it was important to find out why and how the plane crashed, but if the medical team wasn’t able to do their jobs and save the lives of those on the plane, the NTSB wouldn’t have anyone to interview at all. So maybe let them do their jobs and worry about your investigation after. In order to question people, you kind of need them to be alive. Just saying.

No one at New Amsterdam hesitates to do what’s best for their patients, regardless of the risk to themselves. Max did this by not giving up on finding the medication he needed. Also by asking himself and other doctors how they were going to fix this mess. Then Max proceeded to create a chain of transferring the meds that other hospitals needed. Iggy did whatever he had to in order to ensure that his patient was taken care of. It has never surprised us how much Lauren goes above and beyond for her patients. But we aren’t used to seeing her break down about what happens to them and the part she plays. We loved that Casey was there for her and let her know that what she was doing still mattered now just as much as it did when they were at the height of the pandemic.

Why do Max and Helen do this to us? Our Sharpwin hearts! Yes, we know Helen is with Cassian. And we even like the guy! But Helen is clearly more comfortable and at ease with Max. Shown by the fact she didn’t hesitate to touch Max or to allow him to get close to her and yet she practically jumped away from Cassian when he attempted to touch her. So it really just keeps lending weight to our thoughts that Helen being with Cassian is a way for her to try and ignore her feelings with Max. We would really love that if both she and Max would stop doing that. They literally seem to have whole conversations with just a look. And the pull between them? Yeah, we’re going to just need them to figure things out and get together already. We’re confident that this season will be theirs! 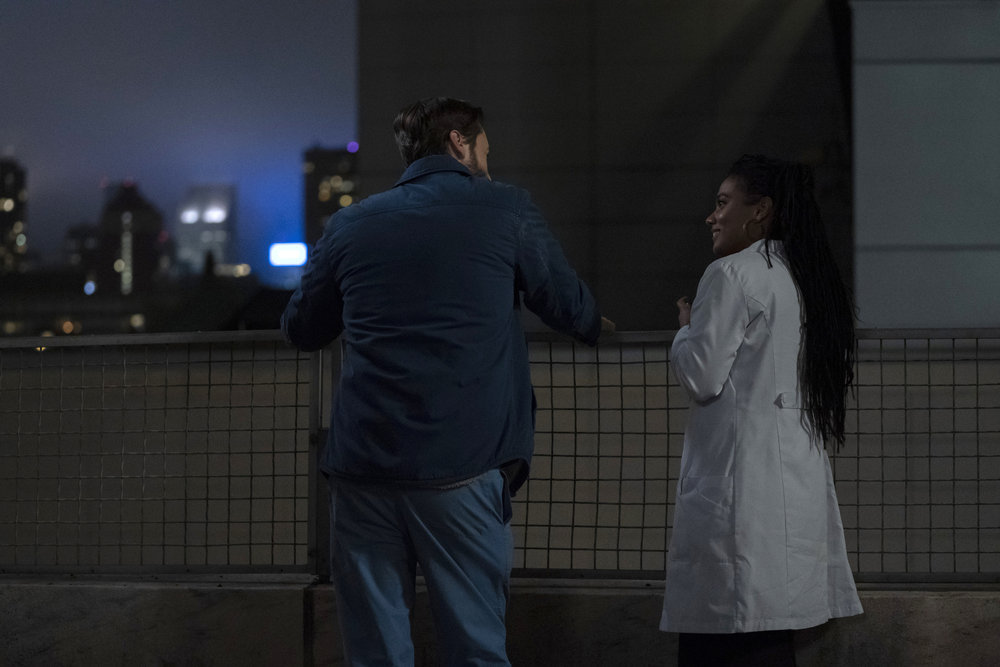 What did you think of New Amsterdam 3×01? Were you glad to see that the show was back? Was your heart breaking like ours at seeing how much stress and pressure our team was under? Did you like the way the show handled things when it came to COVID? Or would you have preferred if they didn’t address it? Were you surprised to see Max getting arrested? What about Floyd? Were you as surprised to see him as we were? Do you think Max and Helen are going to get together? Find and follow us on Twitter @capeandcastle to share all of your New Amsterdam 3×01 thoughts with us! Be sure to check out our site for more articles, podcasts, quizzes, and more on all things Disney and beyond!