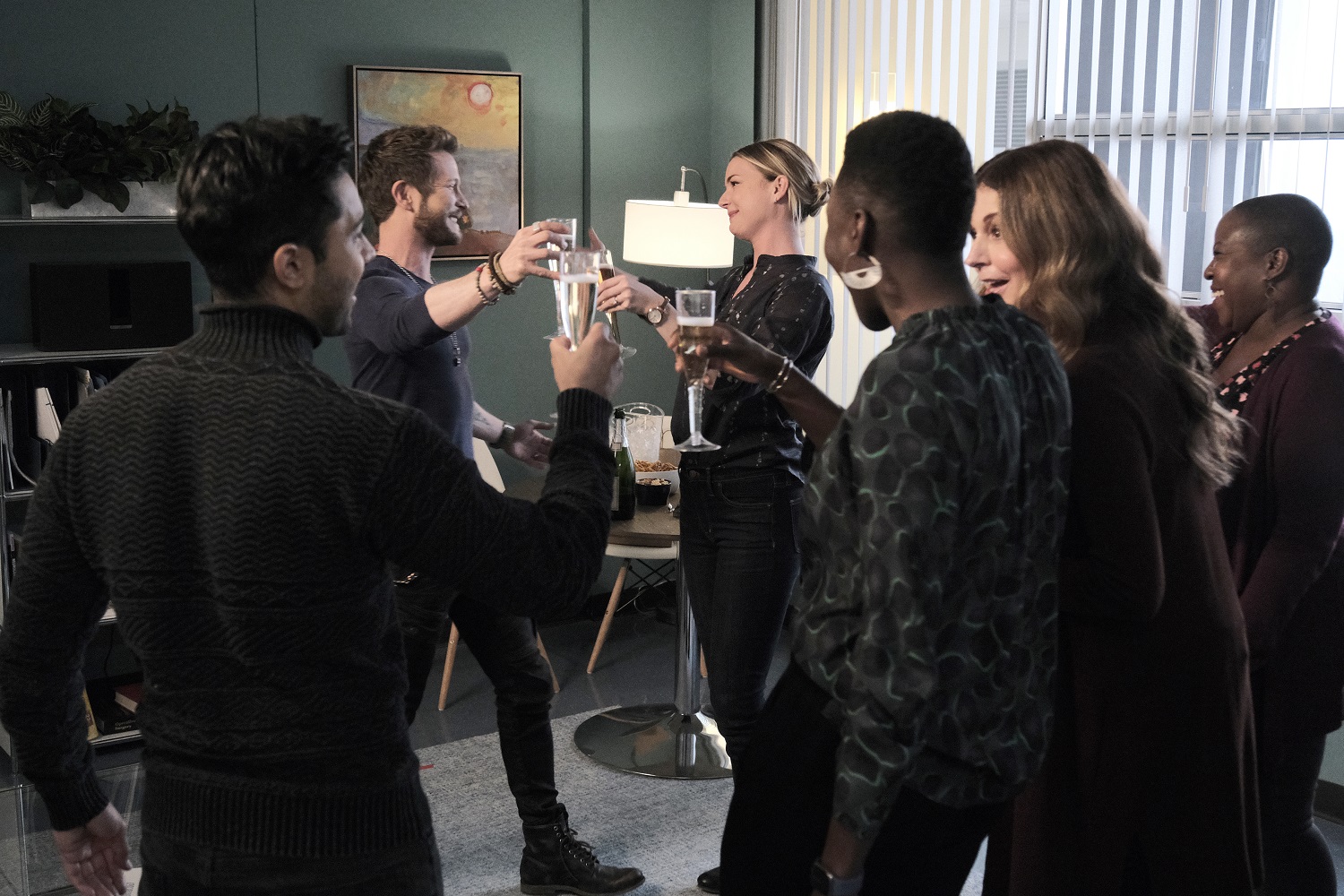 Devon is still struggling and we don’t know if he will be finding his way out of the grief any time soon. Nic and Conrad are being a bit cautious with Nic’s pregnancy. And Mina proposes to AJ in a not so romantic way. For reasons that are also not so romantic. But she comes through with a romantic save at the end. And when Bell has a bit of a stalker, there is more to the story. But Kit is there to have his back as they take on the situation together. So keep reading for The Resident 4×04 review!

We are really loving husband Conrad. But we are loving what Conrad as a husband and father is looking like even more. Though we do understand Nic’s hesitancy to tell others about their good news. There is nothing wrong with Nic and Conrad keeping the news to themselves for a little while. But they should have known that’s not really how news at Chastain works. Especially not when Nic and Conrad have friends as perceptive as Mina and the others. And when the two of them saw the ultrasound of their baby, we will admit that there may have been a few tears in our eyes. The tears really started flowing when they announced they are having a girl! 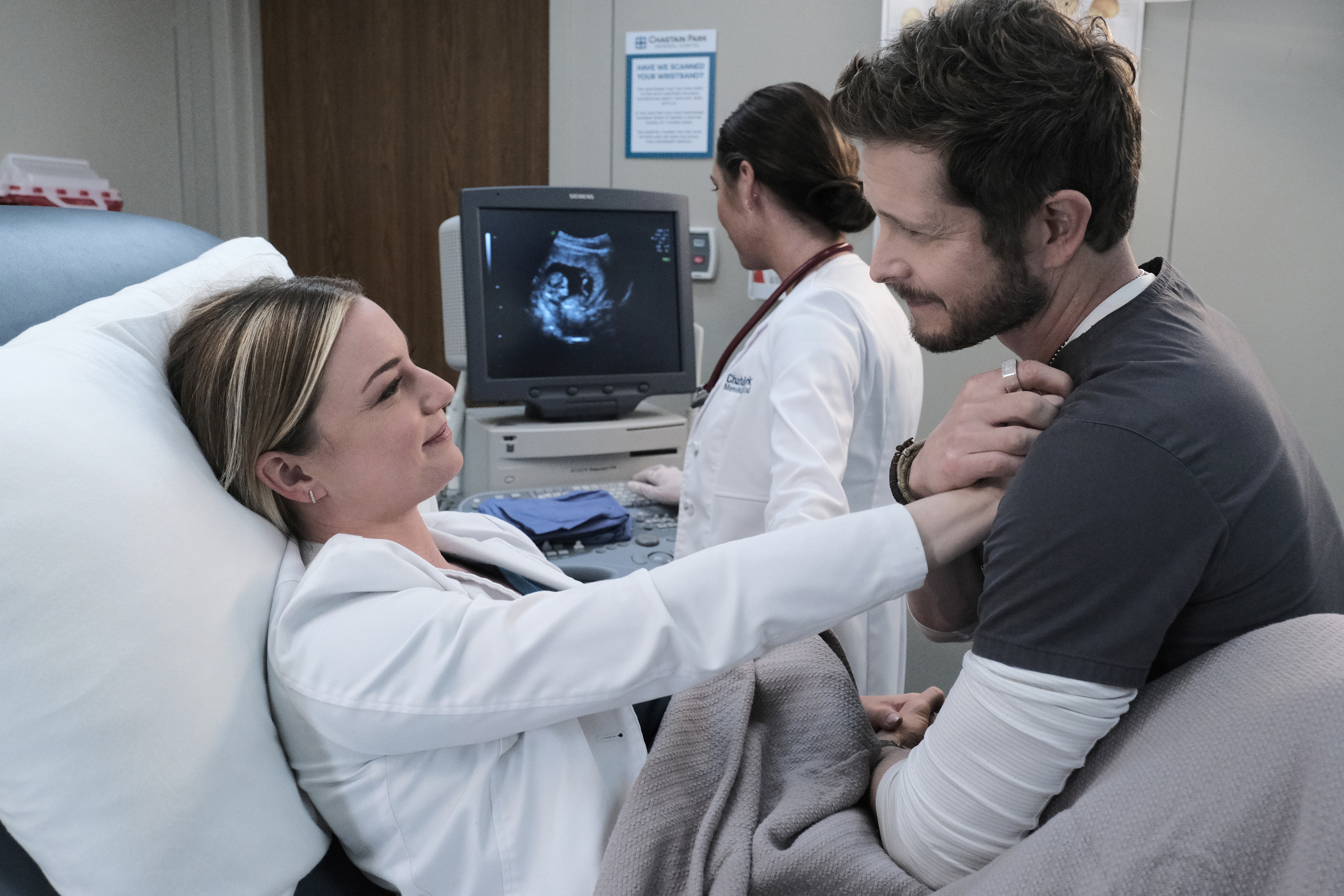 AJ and Mina are too freaking cute. Bringing each other breakfast is so freaking adorable, we can’t even take it. But then when she dropped the bomb of wanting AJ to marry her, we were dumbstruck. Sure, the visa may be the main reason for Mina asking AJ to marry her, but it didn’t stop us from loving it anyway. And we loved that AJ went to Nic for help. But we loved it more when Mina and Nic called each other out for their secrets. We know you love AJ, Mina. But it didn’t look like we were going to get the wedding we wanted. At least not yet. And while we know it is for the best right now, it doesn’t make us any happier about it. Though Mina did make up for it a bit when she told AJ that she’s in love with him. And then he said it back! Our hearts are so freaking full.

Kit and Bell having a fancy meal together? Um, yes, please! We’re going to need some more of that. A lot more. Can those two just start dating already? After all, Kit did save Bell from his stalker, Fiona. The fact that he yelled to her for help was just a little hilarious. We’re not even ashamed for admitting that. Also, can we discuss how proud of Bell we are? Because if this situation had happened to him in season one, we think Bell’s reaction would have been just a bit different. So we were actually glad to see it happen now. Though Bell owes Kit a few more meals for her coming to his rescue.

Watching Kit and Bell work together on Fiona’s case was pretty awesome. We have come to really enjoy Bell working with patients. And when he works with Kit, it’s even better. They both look at things so differently and don’t even seem to realize the chemistry between them. On the job and off. We love that Kit has never been afraid to call Bell out on his bullshit. And the situation with Chastain is no different. Plus, she definitely made some very good points. If they are going to have any hope of saving Chastain, we think it’s going to have to be with Bell in charge. And with Jake as a plastic surgeon. Yeah, we’re definitely siding with Kit on this one.

Conrad is really trying to get Devon to open up to him. But it’s understandable why Devon isn’t. He’s experienced losing a parent and he’s obviously struggling with it. And his mother coming for an unexpected visit clearly wasn’t helping things. He doesn’t feel like talking about his feelings or letting anyone in. But his behavior was getting a bit risky and we were certainly worried about him. For a moment we thought he was going to reach out to Nic and were happy about it. But then he just asked her for medication. So it’s no wonder that Conrad is worrying about him too. And we agree that there is no timeline on grief but we really miss Conrad and Devon’s friendship. But we are glad Devon seems to be making some progress. 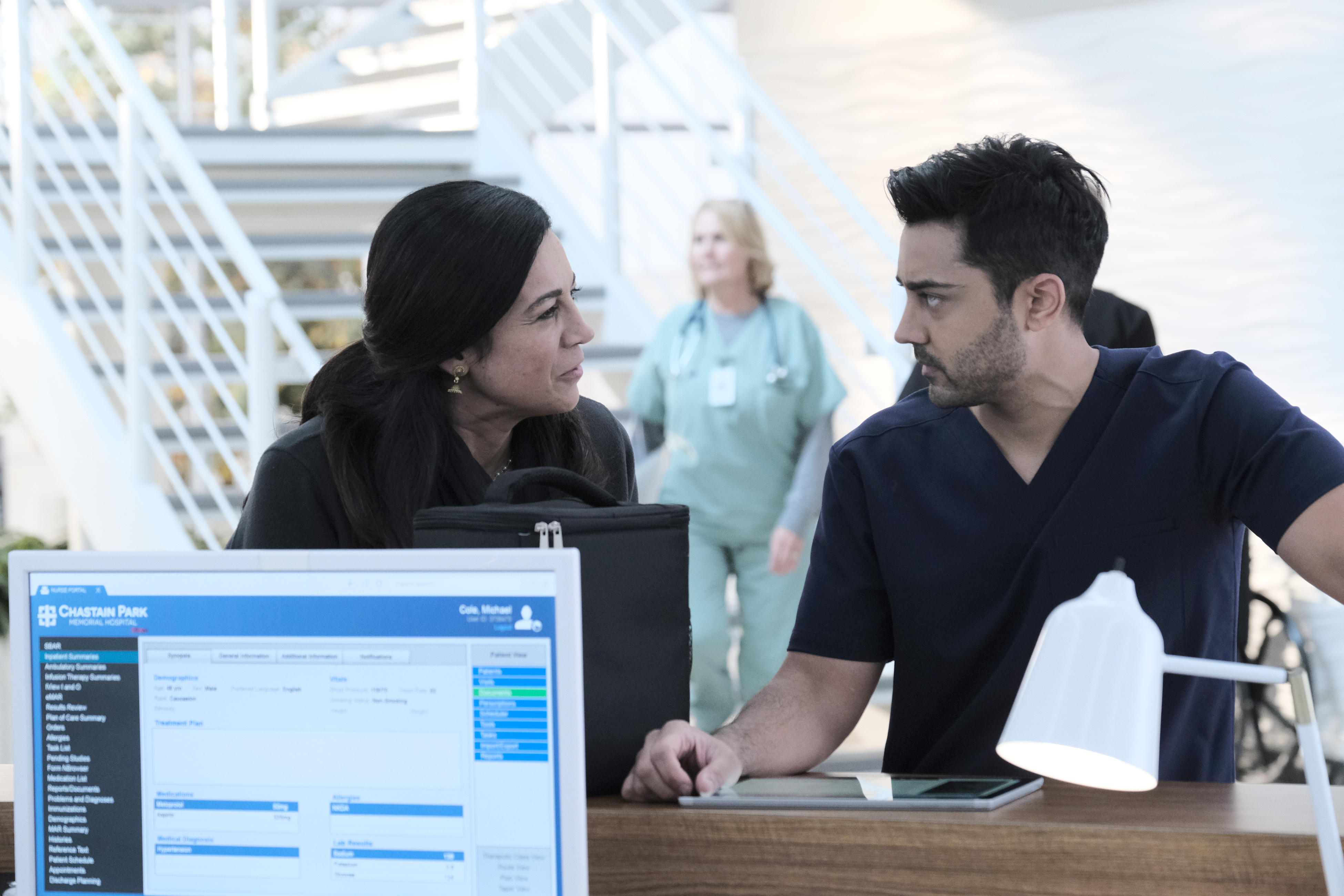 What did you think of The Resident 4×04? Do you think Devon is heading down a path of destruction? Will he have to hit rock bottom before he starts dealing with things? Or can he pull himself out? What’s going to happen with Mina? Do you think she will actually be deported? Or will she find a way to stay? What about Kit and Bell? Do you think the two of them are going to get together? Or are they going to keep things the way they are? Do you think Nic and Conrad’s baby will be okay? Find and follow us on Twitter @capeandcastle to share all your thoughts on The Resident 4×04! Be sure to also check out our site for more articles, quizzes, and more on all things Disney and beyond!